Clinical Cancer Research has recently published a review article entitled “New Strategies in Esophageal Carcinoma: Translational Insights from Signaling Pathways and Immune Checkpoints” in the section of “CCR New Strategies” (1). In this manuscript, Wang et al. first presented the current status of esophageal cancer, introduced conventional treatment strategies, and then focused on targeted therapy of this deadly disease. Several therapeutic targets and their respective agents (both the FDA-approved ones and those currently in trials) were summarized: ERBB signaling (EGFR, HER2), VEGF/VEGFR signaling, HGF/MET signaling, and immune checkpoint. In addition, the authors proposed four points in future clinical trials of esophageal cancer therapy: (I) there is a need to develop treatment protocols on the basis of histologic, anatomic, and even molecular subtypes; (II) tissue acquisition should be mandatory in order to monitor biomarkers or response; (III) quality-of-life measures and surrogate endpoints of survival need to be included in long-term studies; (IV) targeted therapy is meant to be supplementary to instead of replacing cytotoxic therapies.

This is an excellent review from an oncologist’s perspective. There is no question that esophageal cancer deserves more research. It has been understudied mainly because in the West we pay more attention to esophageal adenocarcinoma which is not a common cancer in the East. Meanwhile, targeted therapy has become more and more popular in the East where esophageal squamous cell carcinoma (ESCC) is prevalent. Several research groups have published their sequencing data of ESCC from China and Japan. Personalized targeted therapy of ESCC has been reviewed and discussed by others (2-5) and us (6,7). While this research field is booming, we can clearly envision both problems and promises in the future.

Targeted therapy initially brought in huge promises because of exceptional responders. When erlotinib (an EGFR inhibitor) or vemurafenib (a BRAF inhibitor) was first reported for treatment of lung cancer or melanoma respectively, its immediate and dramatic efficacy fuelled enthusiasm in the whole field. However, over time two limitations become obvious when targeted therapy is applied to a patient population: only a small percentage of genetic alterations can be paired with targeted drugs, and even when patients are given targeted drugs based on biomarkers only ~30% patients responded. Extension of progression-free survival (PFS) and overall survival (OS) is limited (8). As pointed out by Wang et al, anti-HER2 antibody trastuzumab in combination with conventional chemotherapy increased medium OS of HER2-positive gastroesophageal adenocarcinoma from 11.1 to 13.8 months as compared with those on standard chemotherapy (HR: 0.74; P=0.0048). Anti-VEGFR2 antibody ramucirumab in a second-line setting improved median OS from 3.8 to 5.2 months (HR: 0.78; P=0.047), or from 7.4 to 9.6 months in another study (HR: 0.81; P=0.017). EGFR inhibitor, gefitinib, as a second-line treatment in esophageal cancer in unselected patients did not improve OS, but had palliative benefits in a subgroup of these difficult-to-treat patients with short life expectancy. Multiple drugs targeting HER2 or EGFR all produced disappointing results to date.

Several issues may contribute to the inefficacy of these targeted drugs. Patients were not rigorously selected for proper molecular targets before enrollment into the trial. Off-label use of EGFR inhibitors for ESCC has been tested without careful design of clinical studies. Cancer cells may either have preexisting resistance or quickly develop resistance by evolving from drug-tolerant clones (9). Mutations in multiple other genes can contribute to resistance to EGFR inhibitors (10). Cetuximab, an EGFR antibody, even counteracted the effect of oxaliplatin when used in combination by inhibiting oxidative stress (11). The most troublesome issue in dealing with resistance is tumor heterogeneity which has been clearly demonstrated in a recent study sequencing multiple regions of the same ESCC tumors (12).

In addition, a recent study pointed out that the approval process of oncology drugs by FDA may also contribute to the inefficacy of targeted therapy. From 2009 to 2014, FDA approved oncology drugs for 55 indications on the basis of their efficacy on surrogate end points such as response rate or PFS. However, the association of the surrogate end point and OS had been formally evaluated in 30 approvals, and the high-quality association was present in only 19 approvals (13). The only randomized clinical trial in the literature, the SHIVA study, showed that patients treated according to identified mutation or mutations had equally poor prognosis as those treated with conventional therapy (14). Therefore, precision oncology has been seriously questioned as an “illusion” or “hype” (8,15). Even worse, some of the foundations of targeted therapy or precious oncology have been questioned to a certain extent. For example, cancer is not necessarily angiogenesis-dependent as some tumors can be completely non-angiogenic while many more can present with a mixture of both angiogenic and non-angiogenic regions (16). So-called “driver” mutations are not always carcinogenic and they appear sometimes more often in benign or premalignant settings (17).

From the perspective of clinical pharmacology, targeted therapy sometimes does not exhibit dose-limiting toxicities at doses significantly higher than sufficiently active doses (18). Proper doses need to be carefully determined, especially when targeted drugs are off-label used for esophageal cancer. Cost-effectiveness would be another critical issue to consider as targeted therapy now dominates oncology spending. There has been a sharp rise in the cost and use of targeted therapy in oncology in the recent past (19). If not properly managed, it will create a huge burden on the health care system, and exacerbate cancer disparity against patients in the low socioeconomic class. It is well known that ESCC tends to be more prevalent in relatively poor populations.

Nevertheless, we still strongly believe that targeted therapy is an important component of esophageal cancer therapy, even with these problems above mentioned. It is wise to lower down our expectation at this moment. Similarly, leading experts have struck an unexpected note of caution about cancer immunotherapy in the Second International Cancer Immunotherapy Conference in New York in September 2016 (https://www.statnews.com/2016/09/25/cancer-immunotherapy-caution/). It is realistic that targeted therapy will be increasingly used in combination with conventional therapy for esophageal cancer in the foreseeable future.

Extensive research on targeted therapy for esophageal cancer is needed in many areas. The superiority of targeted therapy alone or in combination with conventional therapy needs to be proved by randomized clinical trials. Novel targets and targeted drugs need to be developed. A recent study demonstrated miR-31 as a therapeutic target for ESCC associated with zinc deficiency, and in vivo delivery of anti-miR-31 inhibited miR-31 expression and histological phenotype in a rat esophageal preneoplasia model (20). Esophagus-specific information of signaling pathways, gene regulation, and pharmacokinetics and pharmacodynamics, needs to be generated to guide targeted therapy. Two issues will be critical in the successful development of targeted therapy through clinical trials: (I) close monitoring of biochemical, cellular and clinical response through longitudinal esophageal tissue sampling; (II) close collaboration between clinicians and basic researchers. Case by case analysis of the mechanisms of non-responsiveness would be essential for improvement of future trials (Figure 1). 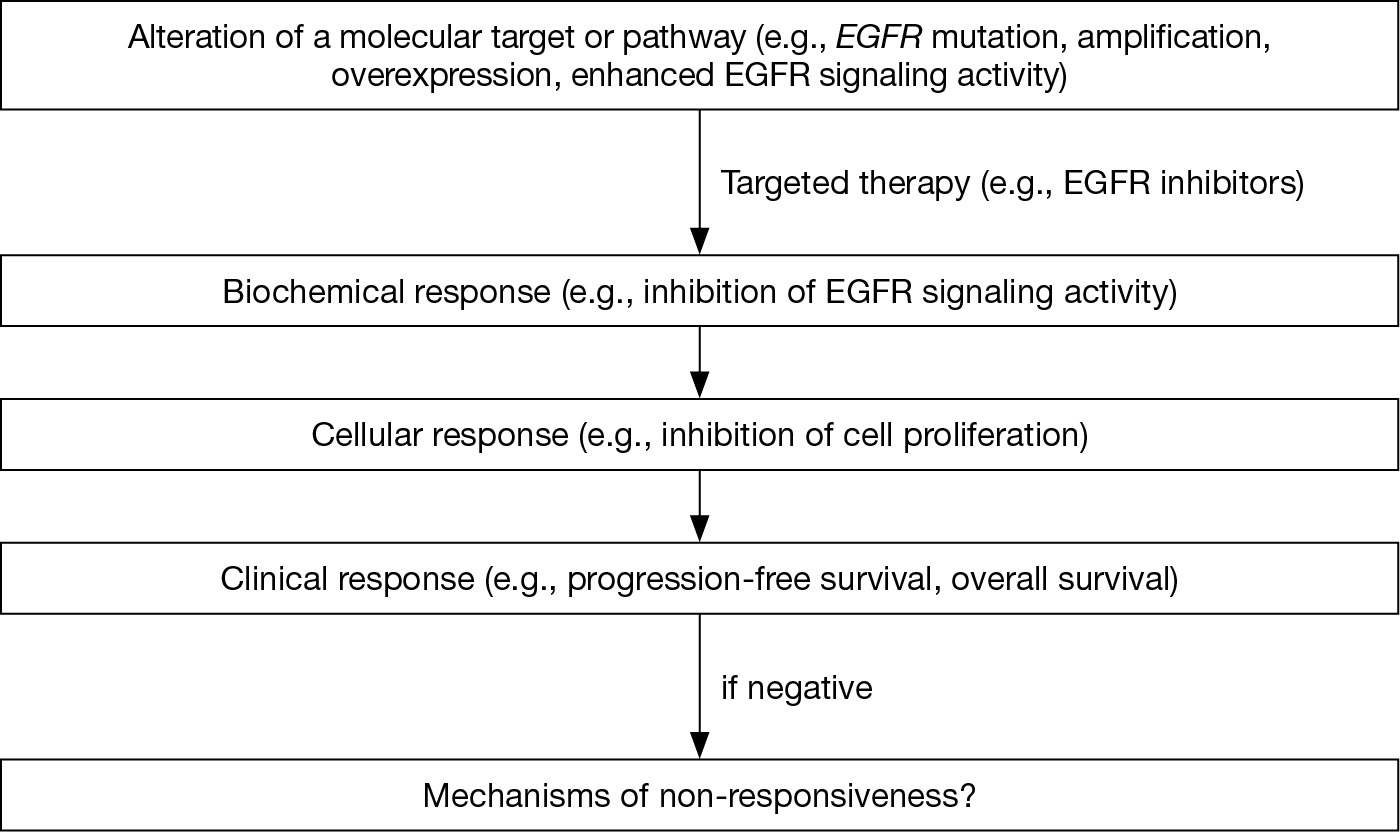