A 52-year-old man was admitted to our hospital with symptoms of dysphagia and regurgitation of undigested food for several years. There were no other serious medical conditions. An upper endoscopy was performed. It revealed a huge epiphrenic esophageal diverticulum at 35 cm from the incisor (Figure 1). Barium esophagogram and computed tomography of the chest and abdomen revealed the huge esophageal diverticulum (6.7 cm × 5.1 cm) located on the left side and in the distal third of the esophagus (Figure 1). There was no abnormal finding on manometry. The pressure of the distal esophagus and lower esophageal sphincter (LES) were 33.0 and 39.9 mmHg.

Surgical treatment was indicated by the severity of symptoms and size of the diverticulum. Thoracoscopic diverticulectomy and myotomy through a single incision were planned. Surgical procedure was performed under general anesthesia with a double lumen endotracheal tube for one-lung ventilation. The patient was placed in a right decubitus position. The single incision (about 4 cm) was made in the left 6th intercostal space on the mid-axillary line. An X-small-sized wound retractor was applied for securing the intercostal space and 5 mm-30° thoracoscope was used (Figure 2). The esophagus and diverticulum were identified. There was no pleural adhesion and the diverticulum did not adhere to surrounding structures such as the lung, pericardium, diaphragm or aorta. The diverticulum was dissected away from the pleura and adherent muscle fiber avoiding mucosal perforation into the lumen with 5mm-endoscopic grasper, spatula-shaped electrocautery, and 5mm-endoscopic ultrasonic scalpel. The entire diverticular neck was exposed and divided with an endoscopic linear stapler (Endo GIATM 60 mm Reload with Tri-StapleTM Technology; COVIDIEN, Minneapolis, MN, USA) (Figure 3). The length of the diverticular neck was about 3.5 cm. The distance between the distal end of the diverticular neck and the LES was about 4 cm. The size of the resected diverdiculum was about 5.5 cm × 5.0 cm × 4.0 cm. The overlying muscle layers were reapproximated over the stapler line by interrupted suture with 3–0 black silk (Figure 3). A myotomy was performed on the contralateral side of the stapler line from the upper level of the diverticulum to the upper level of the LES. The myotomy was not extended onto the LES. The incised mediastinal pleura were closed by interrupted suture (Figure 3). A 24-french chest tube was replaced in anterior part of the single incision at the end of the surgery. The operation time was 155 minutes. The patient was maintained fasting for 6 days after the surgery. On the 6th day after the surgery, an esophagogram with gastrografin was performed, which revealed that there was no stapler line leak and stenosis (Figure 4). The patient resumed an oral diet 7 days after the surgery. The patient was discharged on postoperative day 8 without symptoms of dysphagia and regurgitation. The patient was followed up without recurrent disease for 6 months. 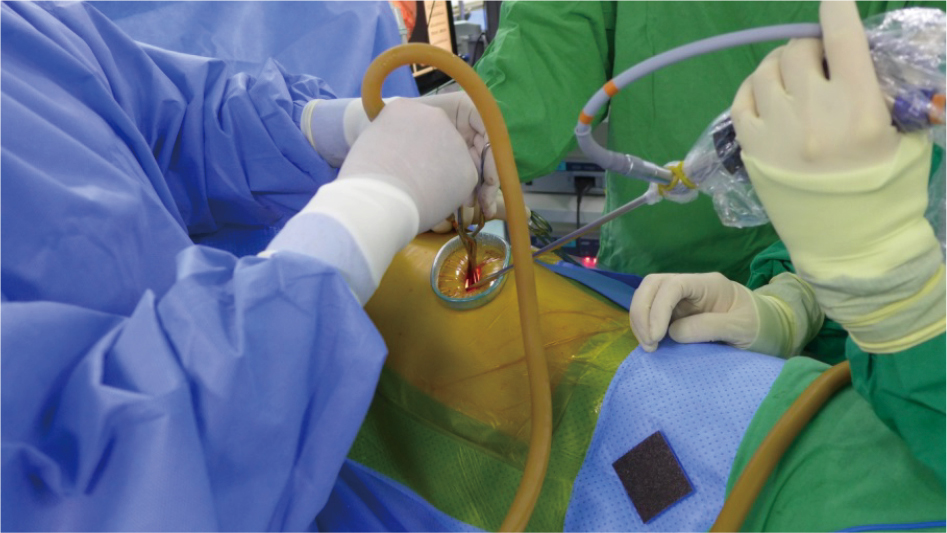 Figure 2 A photograph shows the positioning of surgical wound and instruments. 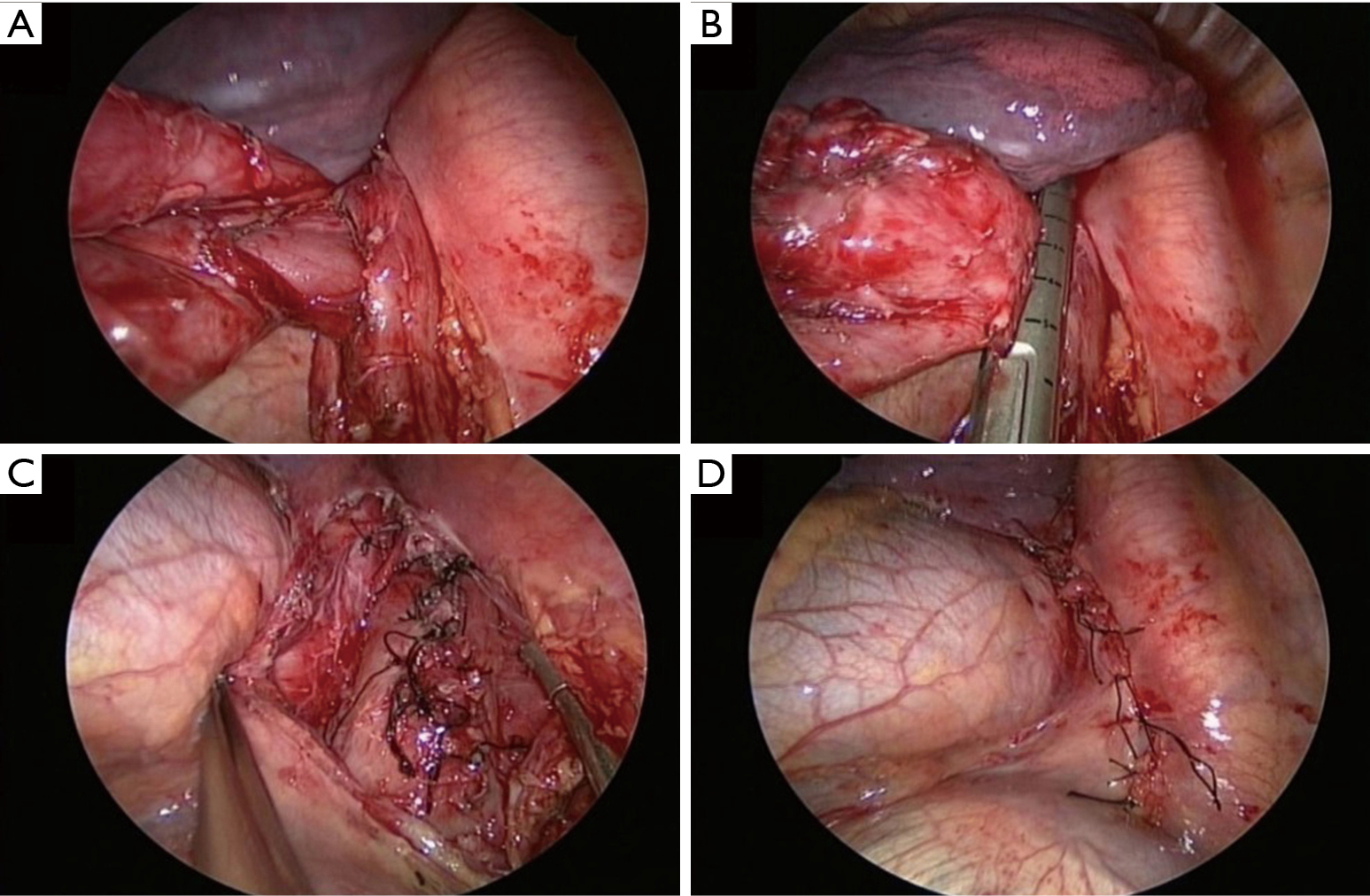 Traditionally, thoracotomy has been the preferred surgical approach (3). Recently, as the development of surgical techniques and instruments of MIS, many surgeons have attempted MIS for epiphrenic esophageal diverticula. They reported that MIS for epiphrenic diverticula were safe and feasible approach which had many advantages such as less postoperative pain, faster recovery and favor cosmetic result (1,6,7). There are various options of surgical approaches for MIS such as VATS, laparoscopy or combined VATS and laparoscopy. According to previously published literatures, most surgeons preferred the laparoscopic approach (1,3-5,7). Laparoscopic approach is useful for performing the myotomy across the LES and the antireflux procedure. However, it could not provide better visualization by comparison with VATS approach, because dissection of the diverticulum and diverticulectomy should be performed through narrow space of the esophageal hiatus. In contrast to laparoscopy, VATS provides better visualization, so dissection of the diverticular neck could be easier especially in the case of more proximal diverticula and diverticula surrounded by significant inflammation (7). It also provides easier extension of the myotomy proximally and could be easily converted into thoracotomy after failed MIS. However, VATS has a disadvantage that the antireflux procedure is difficult (7). Therefore, in cases of epiphrenic esophageal diverticula with normal function of the LES, which the antireflux procedure is not required, VATS could be a very useful option. Most surgeons have performed VATS for epiphrenic esophageal diverticula with multiple ports. In this case, we successfully performed VATS with a single incision of 4 cm in size. Diverticulectomy was performed with the endoscopic linear stapler and myotomy from the upper level of the diverticulum to the upper level of the LES was possible. The myotomy was not across the LES, because the LES function was normal on manometry. Therefore, the antireflux procedure was not performed. Single-port VATS could reduce postoperative pain and paresthesia by comparison with multi-port VATS, because only one intercostal space is involved. Furthermore, it could provide favor cosmetic result. However, the surgical technique of single-port VATS could be very difficult in non-experienced surgeons and the complications of esophageal surgeries could be fatal. Therefore, there could be some limitations to apply single-port VATS in all patients and in all surgeons. We recommend that single-port VATS for the esophageal diverticula should be considered in well selected patients by very experienced surgeons.

In conclusion, single-port VATS could be a useful option among various surgical approaches for epiphrenic esophageal diverticula in well selected patients.