Characteristics and prognosis of microscopic polyangiitis with bronchiectasis

Anti-neutrophil cytoplasmic antibody (ANCA)-associated vasculitis (AAV) is a group of heterogeneous diseases including microscopic polyangiitis (MPA), granulomatosis with polyangiitis (GPA), eosinophilic granulomatosis with polyangiitis (EGPA), and renal-limited AAV (1). MPA is histologically characterized by inflammation and fibrinoid necrosis of systemic small vessel walls, which induces the dysfunction of various organs including the kidneys, lungs, skin, digestive system, and nerves (2). Pulmonary manifestations, such as interstitial pneumonia (IP) (3,4), diffuse alveolar hemorrhage (DAH) (2,5), pulmonary infiltrations, and pleural effusions, affect the prognosis of patients with MPA (6). The Japanese patients in the MPO-ANCA-associated Vasculitis (JMAAV) study showed that the rate of pulmonary involvement with MPA was 45.8%, and the mean survival rate of all MPA patients at 1 year was 89.6% (7). Pulmonary involvement was a predictive factor of disease relapse in AAV patients (8), and DAH was associated with a poorer prognosis in MPA compared to other manifestations (9,10).

Bronchiectasis (BE) is radiologically defined by irreversible dilatation of the bronchus rendering it more than 1.5 times as wide as a nearby vessel as well as by lack of bronchial narrowing in the lung periphery (11,12). Clinical symptoms of BE include cough, sputum, and hemoptysis. Progression of BE is related to neutrophilic inflammation induced by bacterial infection, and 84% of BE patients have sputum cultures positive for pathogens (13). Common etiologies of BE have been reported to be idiopathic, sinobronchial syndrome, and non-tuberculous mycobacteriosis in Japan, in contrast to immune dysfunction in the US (14). We previously reported that BE defined by chest radiography was found to occur in 35% of MPA patients, indicating that BE was one of the pulmonary complications (15). Lhote et al. reported that establishment of BE was related to the production of bactericidal/permeability–increasing protein (BPI)-ANCA, which is one of the target antigen of ANCA (16). These data suggested that BE may be an important pulmonary complication rather than just a co-existing sign of MPA (15).

This data in this study were analyzed retrospectively. All patients’ data were collected exhaustively from medical record which registered disease name of MPA including out and administrative data. We reviewed 45 patients diagnosed with MPA at Saga University Hospital between 2004 and 2011 and analyzed 31 patients with MPA who had pulmonary involvement. As the first step after diagnosis, GPA patients were excluded. Patients who had sinusitis, even if GPA was not diagnosed, were also excluded. Diagnosis of MPA was based on the Japanese Ministry of Health, Labor and Welfare Report 1999. The criteria consisted of three symptoms, four laboratory findings, and histological findings. Symptoms included: (I) rapidly progressive glomerulonephritis; (II) DAH or IP; and (III) others such as subcutaneous hemorrhage and gastrointestinal bleeding. Laboratory and histological findings included: (I) a high titer of MPO-ANCA; (II) increased C-reactive protein (CRP); (III) proteinuria and hematuria; and (IV) pulmonary consolidations or interstitial shadows on radiological examinations. Histological findings included invasion with inflammatory cells and necrosis of the microvasculature. Disease activity of MPA at diagnosis was evaluated by the Birmingham Vasculitis Activity Score (BVAS), version 3 (17), and prognostic factor of MPA was evaluated by the Five-Factor Score (FFS), revised (18,19).

In the present study, high-resolution CT (HRCT) of the chest before treatment was evaluated by two pulmonologists who referenced official reports from a radiologist. We divided the dominant pulmonary findings into three types, based on HRCT, including IP, DAH, and BE. All patients received induction therapy with various doses of corticosteroid as prescribed by their attending physicians. Cyclophosphamide and other immunosuppressive therapies were administered according to their physicians’ judgment. Administration of vaccination against influenza virus and pneumococcal pathogens was decided by the attending physician. The radiological severity of BE was evaluated using the Bhalla score (20). This score consisted of (I) severity of BE; (II) peribronchial thickening; (III) extent of BE (number of lung segments); (IV) extent of mucus plugs (number of lung segments); (V) abscesses or sacculations (number of lung segments); (VI) generalities of the bronchial division involved (BE/plug); (VII) number of bubbles; (VIII) emphysema (number of lung segments); and (IX) collapse/consolidation. The total score for each patient was obtained by summing the scores for each morphological change, which were assigned on the basis of the severity/extent of the abnormality. The total score could range from zero (absence of abnormalities) to 25 (all abnormalities present and severe). The patients were followed over a median of 52.9 months (range, 1–125 months) at either Saga University Hospital or affiliated hospitals and follow-up information was collected in December 2014 to maintain consistency. This study was approved by the ethics committee of Saga University Hospital (approval number: 2015-11-09) and therefore performed in accordance with the 1964 Declaration of Helsinki.

For statistical analysis, quantitative data are presented as mean ± standard deviation (SD). The significance of the differences between the two groups was analyzed using the Mann-Whitney U test and Fisher’s exact test for nonparametric variables. The significance of the differences among frequency data were evaluated using Fisher’s exact test. Survival probabilities were estimated using the Kaplan-Meier technique. Differences in survival between the two groups were analyzed using the log-rank test. The two-tailed significance level was set at P<0.05.

Characteristics of patients with MPA manifested by pulmonary involvements

Among 45 patients diagnosed with MPA, 31 (69%) had pulmonary involvements. We divided them into two groups: with BE (7/45, 16%) and without BE (24/45, 53%) (Table 1). The latter included patients with IP (23/45, 51%), DAH (5/45, 11%). Four patients had coexisting IP and DAH. The patients with BE did not have other coexisting pulmonary manifestation (Figure 1). The average Bhalla score in patients with BE was 10.0 (range, 6–21). There were no differences in demographic data, symptoms, other organ complications, laboratory data or disease activity as investigated by BVAS and FFS between the patients with or without BE. In microbial testing of seven patients with BE, two patients (28.6%) were colonized by Pseudomonas aeruginosa (P. aeruginosa). Initial treatment is shown in Table 2. Glucocorticoid pulse therapy was given to three patients (43%) with BE and 12 patients (50%) without BE. Cyclophosphamide plus glucocorticoid therapy was not given to the patients with BE, but it was given to four patients (17%) without BE. There were no statistically significant differences between the groups. 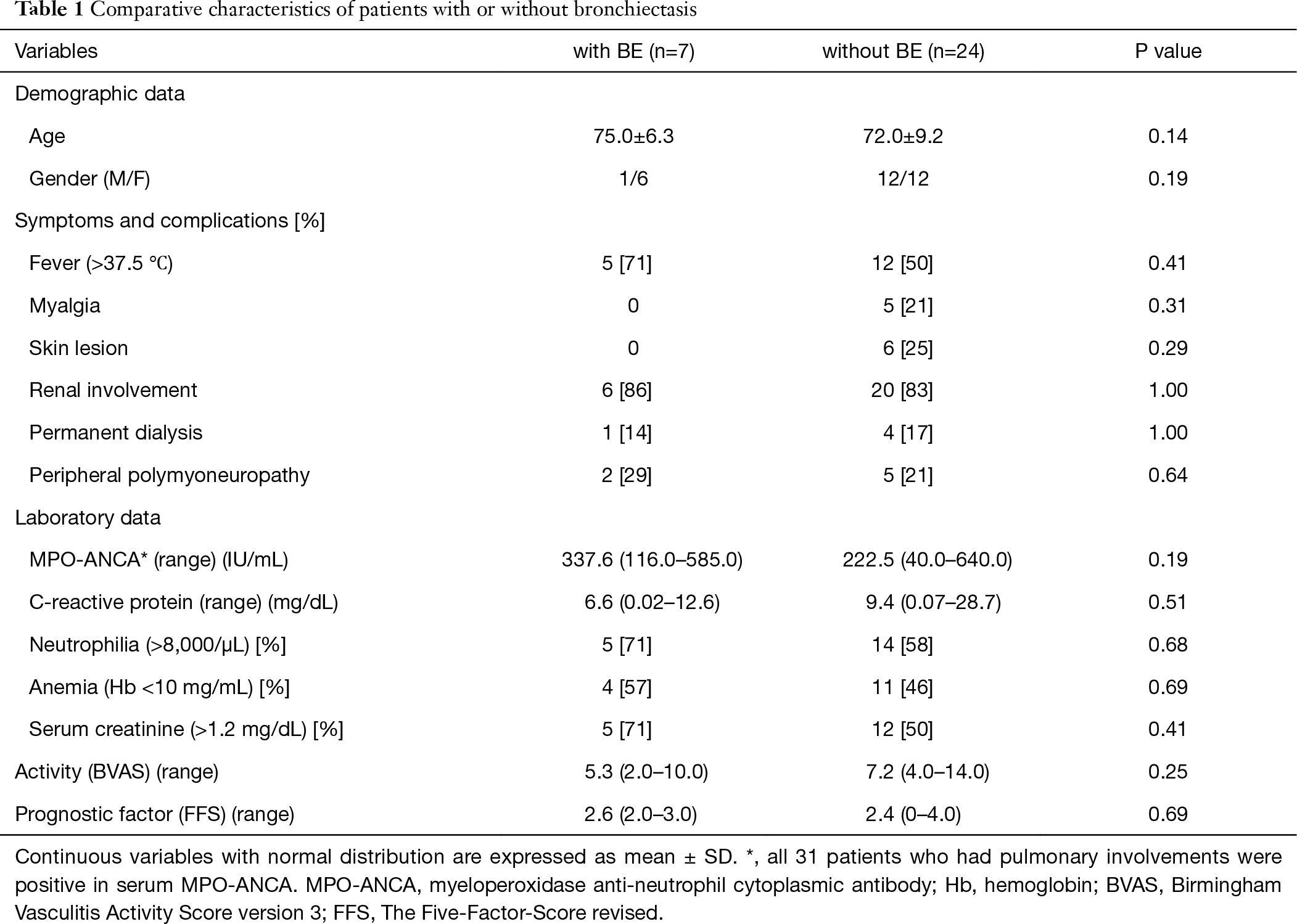 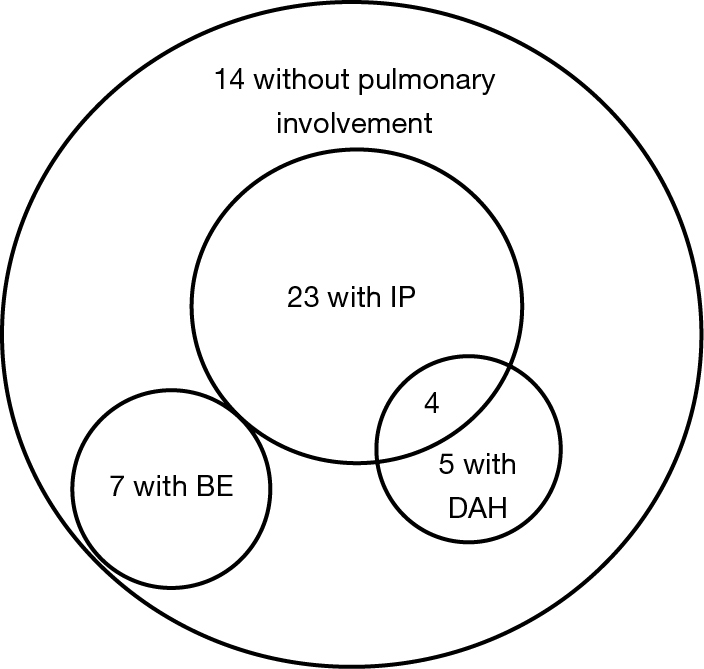 Prognosis of MPA patients with or without BE 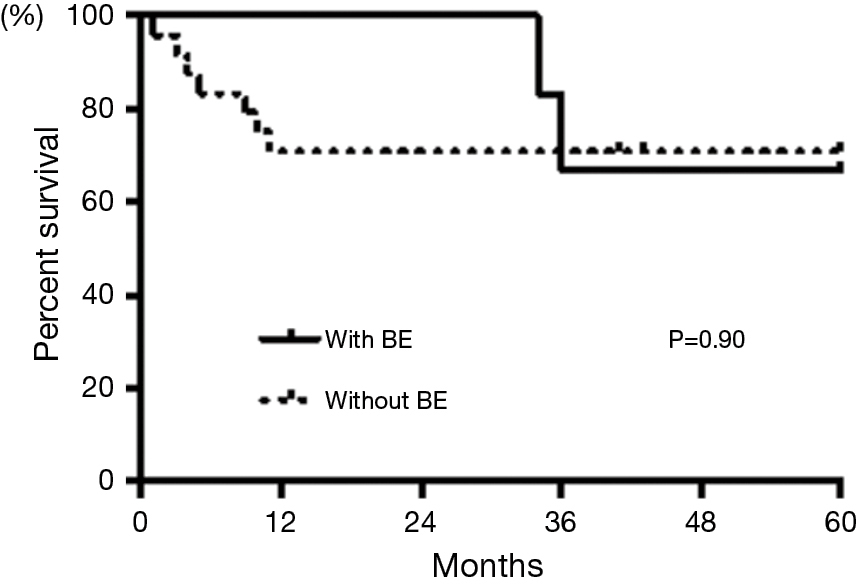 In the present study, we showed that pulmonary complications were found in 31 patients (69%) among 45 patients with MPA, in which IP (23/45, 51%), BE (7/45, 16%), and DAH (5/45, 11%) were represented. Comparing clinical characteristics between the patients with BE and without BE, the prognosis of patients with BE was better than patients without BE during the first year after diagnosis, whereas it was worse between 1 and 5 years. All patients died from pneumonia with acute respiratory distress syndrome.

BE is a chronic inflammatory lung disease that is characterized by various respiratory symptoms and repeated respiratory infection. Chronic airway inflammation is speculated as a possible trigger of ANCA production. Indeed, B cells continuously stimulated by Staphylococcus aureus in the lungs may result in the generation of ANCA (22). Persistent infection induces pro-inflammatory cytokines, such as TNF-a, IL-1b, and IFN-g, and is related to the production of ANCA (23). In regard to mechanisms of ANCA production, BPI, which is also a target antigen of ANCA, is reported to be an important molecule. BPI has an amino-terminal domain that binds with lipopolysaccharide, and the amino acid sequence of BPI epitopes has homology with the membranes of Escherichia coli and P. aeruginosa (24). It has been speculated that bacterial infections stimulate the production of BPI autoantibodies, such as ANCA, and the molecular mimicry of BPI and infectious pathogens could be one of the mechanisms of initiation of BPI auto-antibody development (24). In the present study, it is unclear whether BE is an important complication or just a coincidental pulmonary finding with MPA. However, BE was frequently seen in MPA patients in our present study, and chronic airway inflammation related to bacterial infection as a feature of BE is reported to be the pathogenesis of MPA. Accordingly, we believe that BE may be an important complication of rather than just a coincidental finding with MPA.

There are possible limitations to the present study. As part of the initial treatment, the administration rate of cyclophosphamide was low in all of the MPA patients. That may have affected the mortality rate of IP and DAH patients with MPA in the acute phase. Moreover, this study was performed on a small number of patients at a single university hospital. To ensure the validity of our findings, multicenter studies involving a large number of patients should be performed.

In conclusion, BE is one of the major pulmonary complications of MPA but is related to better survival in the acute phase than IP or DAH. However, BE is more highly associated with complications of critical respiratory infection during the chronic phase than IP or DAH. Physicians should pay more attention to infections in patients with BE during the chronic phase of MPA, even in those patients who have not been colonized by any pathogens.

Ethical Statement: This study was approved by the ethics committee of Saga University Hospital (approval number: 2015-11-09) and therefore performed in accordance with the 1964 Declaration of Helsinki.