Surgical lung resection with systematic mediastinal lymph node (LN) dissection or sampling is recommended by the National Comprehensive Cancer Network guidelines for stages I–II and resectable stage IIIA non-small cell lung cancer (NSCLC) (1). Previous studies have shown that systematic LN dissection (SLND) could improve staging (2-5) and overall survival compared to LN sampling (6-8). Variations in lung cancer lymphatic drainage may be partly responsible for the need of an extensive mediastinal dissection (9,10). A recent systematic review and meta-analysis showed that SLND was associated with a statistically significant improvement in overall survival and recurrence-free survival (11). However, the effect of the number of dissected LNs on tumor recurrence or overall survival is still controversial. Some studies reported that the number of LNs removed in early stage NSCLC patients who underwent lobectomy was an independent positive prognostic factor for overall and lung overall survival (6,12,13). Other studies suggest that the number of dissected LNs has no significant impact on overall survival, whereas the number of positive LNs does (14,15).

We retrospectively investigated the association between the number of LNs and stations resected, and positivity of dissected LNs to tumor recurrence and overall mortality in clinical early stage NSCLC patients who underwent complete resection at Chiang Mai University Hospital.

From June 2000 to June 2012, medical records of 240 patients who underwent pulmonary resection for primary lung cancer at the Department of Surgery, Faculty of Medicine, Chiang Mai University Hospital, Chiang Mai, Thailand were retrospectively reviewed. All patients received preoperative cancer staging including computed tomography (CT) with contrast, bronchoscopy with biopsy, bronchial washing, brushing or bronchial lavage cytology. If mediastinal lymph nodes were larger than 1 cm, endobronchial ultrasound-guided (EBUS) fine needle aspiration, or mediastinoscope biopsy were performed. Patients with mediastinal lymph nodes involvement were classified as N2 disease, and induction chemotherapy was performed. Positron emission tomography-computed tomography (PET-CT) was not available. CT-brain and bone scans were performed if clinically relevant. These patients represent all clinical early stage NSCLC who underwent curative intent-complete pulmonary resection with SLND or sampling of the hilum and mediastinum according to the international LN map for TNM classification of lung cancer (16). Exclusion criteria were patients who received any induction therapy (radiation or chemotherapy). NSCLC staging was determined according to the 7th edition of the TNM classification of malignant tumors (17). The World Health Organization classification, 3rd edition was used for histological tumor types. All dissected LNs were examined pathologically by expert pulmonary pathologists (Nirush Lertprasertsuke, Sarawut Kongkarnka) who were blinded to the clinical outcomes. To confirm the clinical early status, all patients went through a preoperative evaluation, including medical history, physical examination, plain chest radiography, chest CT, and bone scan or PET-CT if necessary.

Surgical procedures included sublobar resection [3 patients (1.3%) with clinical stage Ia and age 74, 75 and 78 years], lobectomy (232 patients, 96.7%) and pneumonectomy (5 patients, 2.1%) depending on tumor size and location. Mediastinal LN dissection was routinely performed; in some patients, for example T1 tumor in patients age >70 years, A LN sampling was done. LN stations were defined according to the IASLC classification (18). The N2 level included ipsilateral station 2–station 9, N1 level included ipsilateral station 10–station 14, N3 level included station 1, contralateral mediastinal LN, and hilar nodes. Mediastinal LN dissection or sampling was routinely performed after complete pulmonary resection. All dissected LNs were collected in separate labeled-containers according to the dissected stations. Tissues and LNs were sent for routine pathologic analysis and preserved in paraffin blocks. All patients were followed and evaluated for clinical symptoms and a chest X-ray at the thoracic surgery clinic at 2 weeks and at 3 months after surgery; then every 6 months for CT of the chest within the first 2 years after surgery, and then every year after that.

The primary outcomes of this study were tumor recurrence and overall mortality.

Tumor recurrence was defined as the first diagnosis of either local recurrence or distant metastasis after complete surgical resection. This study was reviewed and approved by the Institutional Review Board of Faculty of Medicine, Chiang Mai University, Chiang Mai, Thailand with Study Code: SUR-2556-01811/Research ID: 1811, and ID of the approval 276/2013.

Most of the patients included in the study were ex-smokers (Table 1); male to female ratio was 1.4:1. The most common presenting symptoms were chronic cough and non-massive hemoptysis. Asymptomatic patients were approximately 37%. Lung mass or nodule was found by incidental finding from chest X-ray. 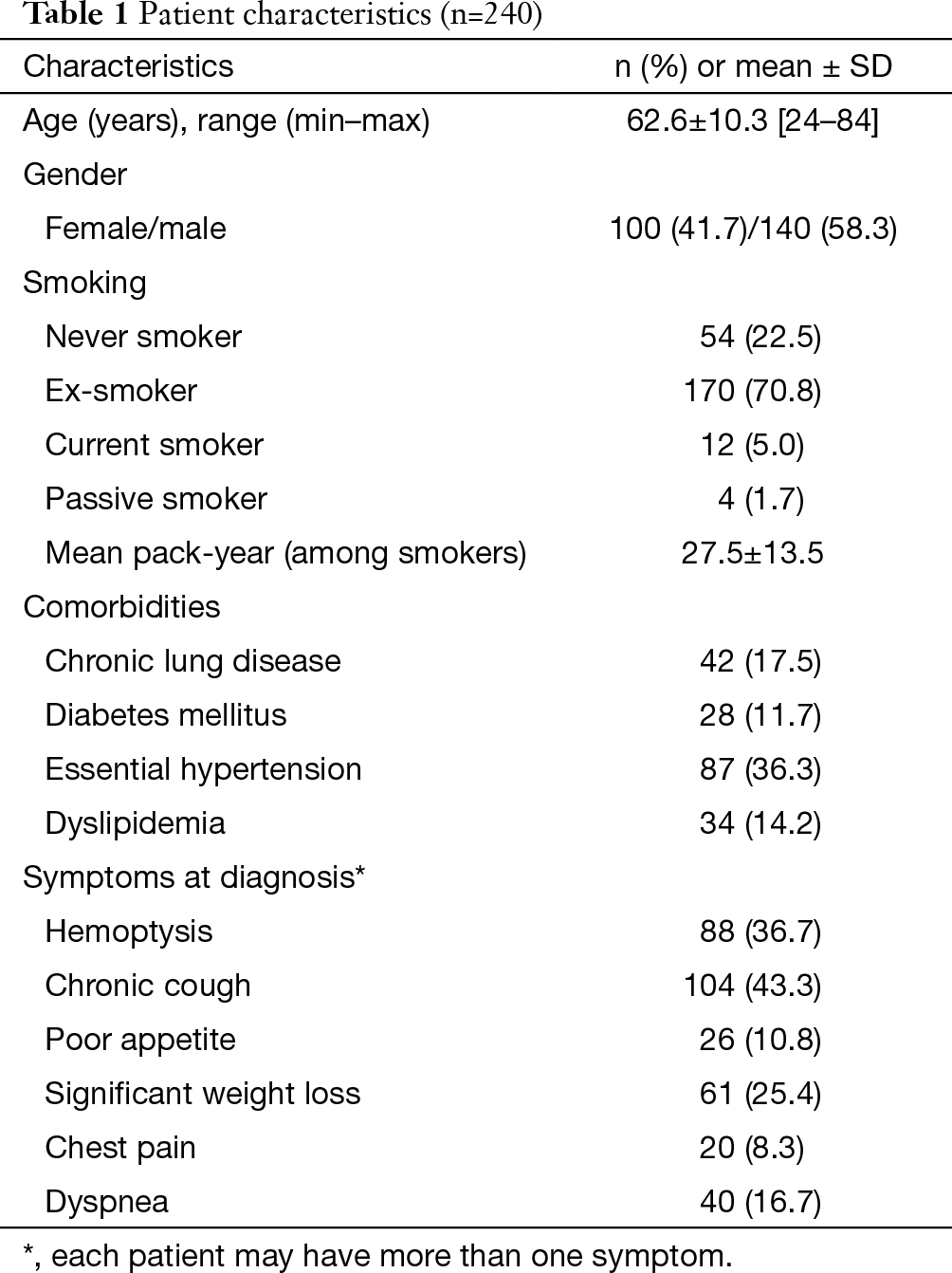 Figure 1 Correlation between positivity of dissected lymph nodes and recurrent rate and recurrent time (A), and mortality rate and survival time (B).

The optimal cut-off point for total number of dissected LNs was 11 (HR for recurrence 2.22, 95% CI: 1.26–3.92; Table S1). The strongest association was observed in stage I and stage II NSCLC as shown by adjusted parametric survival curve analyzed by mixed-effects Weibull regression (Figure 2). The unadjusted Kaplan-Meier survival curves and the number of at risk patient were shown in Figure S1. 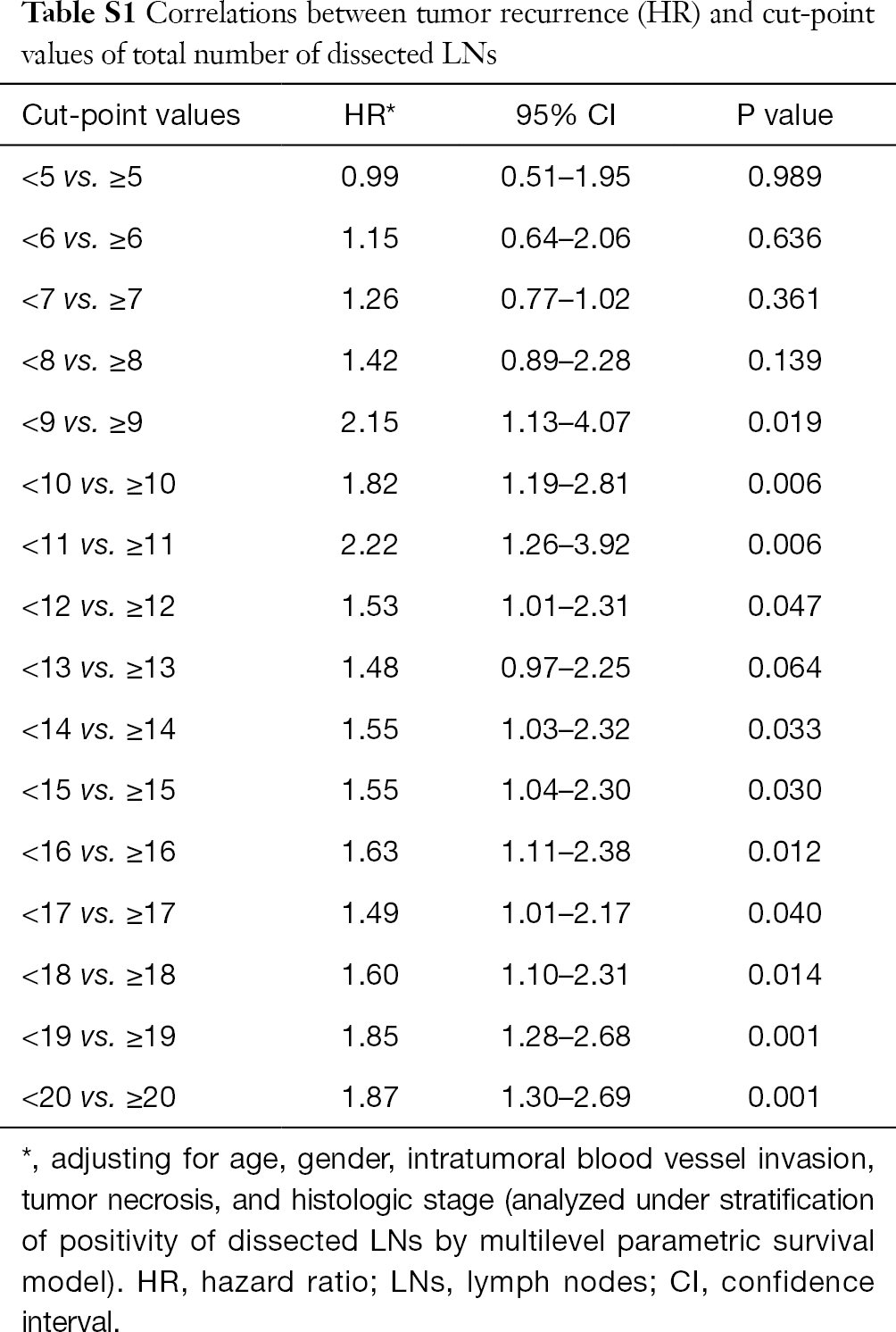 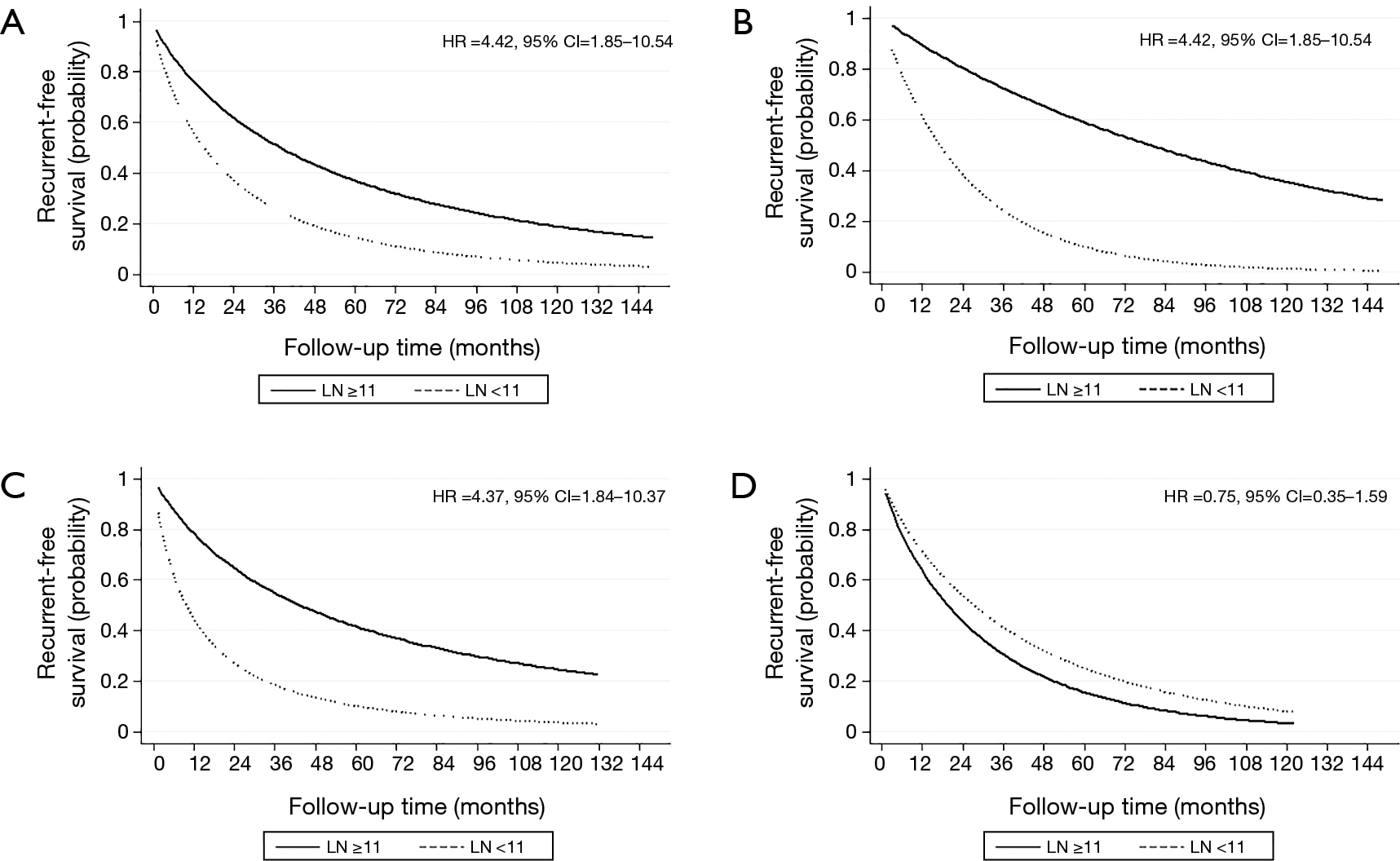 Figure 2 Recurrent-free survival curves according to the cut-point of dissected LNs of 11 LNs. (A) overall; (B) stage I; (C) stage II; (D) stage III, analyzed by mixed-effects Weibull regression. 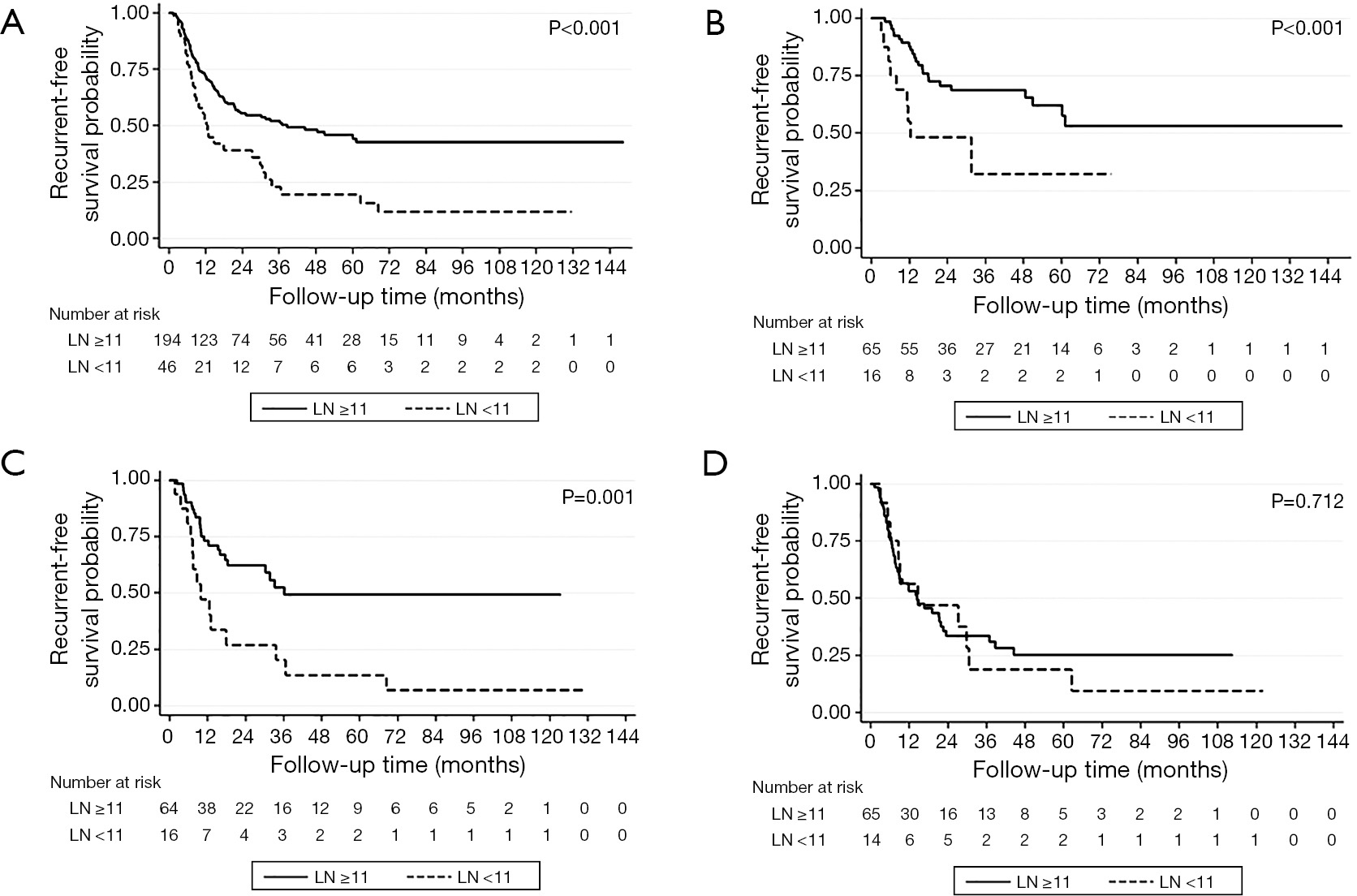 The location of the dissected LNs was not an independent prognostic factor for tumor recurrence (Table 4). However, if less than 11 LNs were resected, with ≤5 stations dissected, a significant worse recurrence prognosis was observed (Table S2, the interested reader can find a supplementary appendix in online). 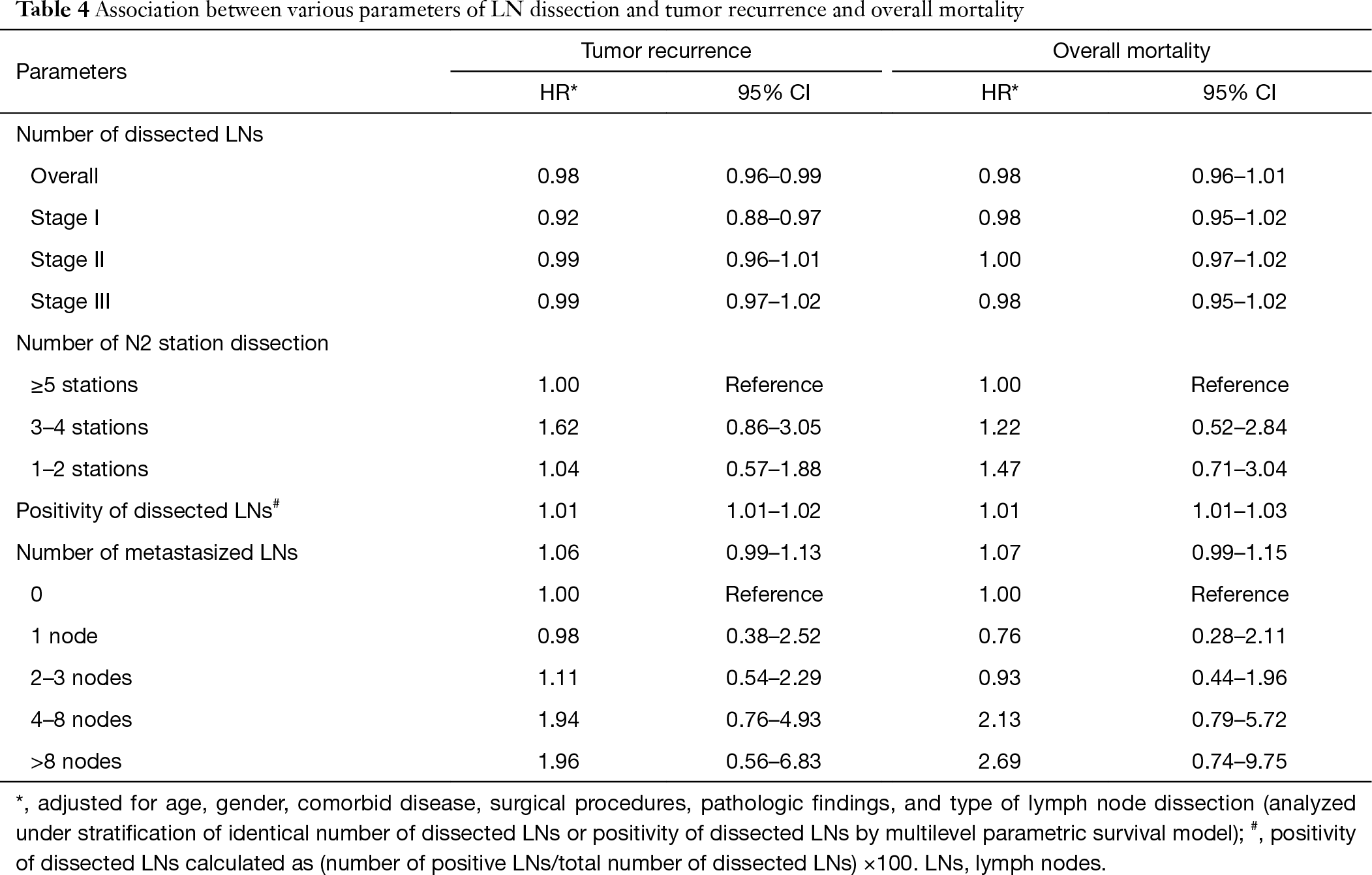 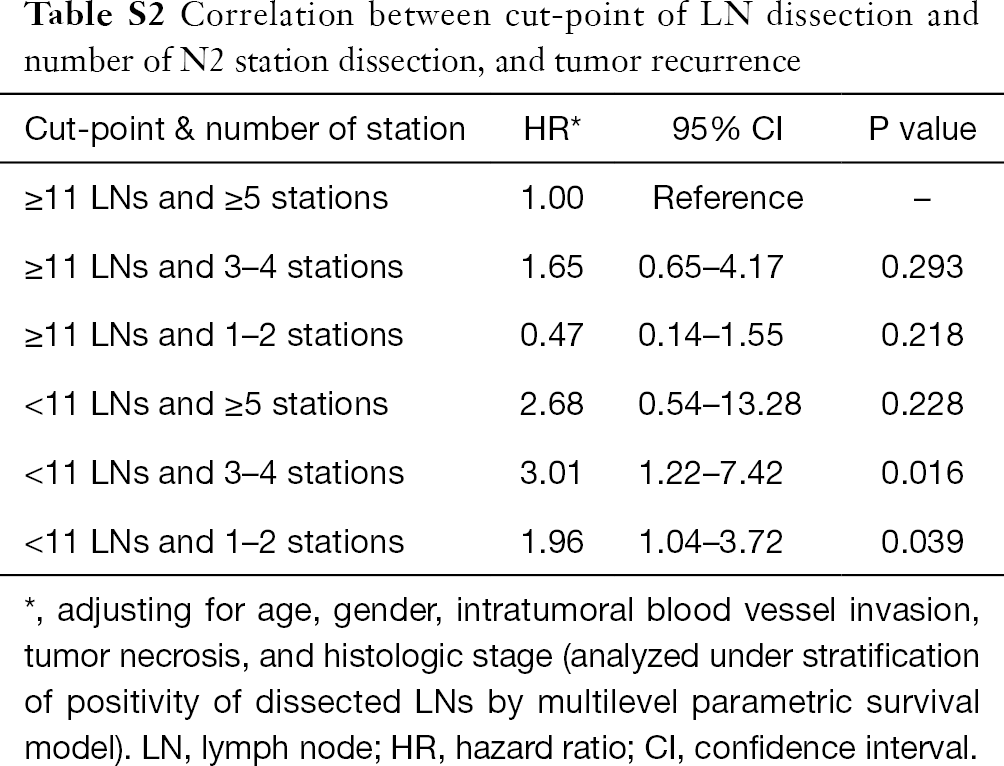 The number of metastasized LNs was not an independent prognostic factor for tumor recurrence at multivariable analysis (Table 4).

LN status is a major prognostic factor for tumor recurrence and survival in lung cancer patients. However, mediastinal LN dissection as part of NSCLC treatment is still controversial. The present results indicate that tumor recurrence and overall mortality after complete pulmonary resection and LN dissection are associated with the presence of positive LNs among those dissected. However, the number of LNs dissected is associated with tumor recurrence, but not with overall mortality. The cut-off point for recurrence was 11 LN in this study. Patients having had less than 11 LNs dissected had significantly less recurrent-free survival, but no effect on overall mortality. Previous studies have shown different results, with number of LNs dissected affecting both overall survival and lung overall survival (2,6,7,12). Possible reasons for the discrepancy could be the small sample size of this present study which carries less statistical power, the shorter follow-up time, or different techniques of data analysis. Some previous studies reported on the association between recurrence and number of dissected LNs (13,19). In this study the number of dissected LNs was an independent prognostic factor for tumor recurrence. Previous studies found that the optimal cut-point numbers of dissected LNs was varied, in the range of more than 6 to 15 LNs (2,13,19-21). In the present study, 10 or more LNs should be dissected in order to obtain a significant decrease in tumor recurrence, and this is especially true in pathologic stage I and II NSCLC.

The stations dissected are an important factor when performing LN dissection. Currently, the number of LN stations to be dissected is still under debate. Wang et al. suggested dissection of only 3 stations of N2 (7). Gajra et al. found that patients with a larger number of mediastinal stations dissected had an improvement in disease-free and overall survival compared to those with fewer mediastinal stations dissected, and suggested a dissection of more than 4 stations (13), similar to what was performed in this study. However, in the present study the number of N2 stations dissected was not an independent prognostic factor for tumor recurrence and overall mortality. The dissection of less than 5 stations and less than 11 LNs suggested significant adverse outcomes in terms of tumor recurrence. Recently, Liang et al. reported data from a Chinese multi-institutional registry and the US SEER database on stage I to IIIA resected NSCLC [2001–2008]; in this paper, a larger number of examined LNs was associated with more-accurate node staging and better long-term survival. The authors recommended 16 LNs as the cut point for evaluating the quality of LN examination and declaring a node-negative disease (22). However, the data of the stations of dissected LNs was not available in that publication.

This specific statistical analysis is one of the strengths of this study. There are some limitations in this study because of its retrospective nature. First, clinical stage was not available in the database; therefore it was not possible to compare stage before and after surgery (up-stage). However, all patients in this cohort were clinically resectable, thus the maximum nodal diameter of mediastinal LNs at CT scan was less than 1 cm, and were classified as clinical N0 patients. Second, the small sample size of this study may carry a lower statistical power than previous studies. Further large cohort studies, more complete data collection, and/or multi-center studies are warranted. Third, in 13% of patients LN sampling was performed, following ACCP guidelines (3) that recommend either SLND or sampling in early clinical stage, especially in stage I disease. SLND was routinely performed in all cases; in patients age >70 years with small tumor size (less than 1 cm) in the upper lobe, we performed sublobar resection or lobectomy with LN sampling. In order to address this possible bias which may be associated with patient survival or tumor recurrence, we adjusted the multivariable analyses for type of LN dissection (among other covariates. Finally, some important pre-treatment clinical features including the Charlson comorbidity index, pulmonary function test or other cardiopulmonary test, and patient’s socioeconomic status that may be associated with overall mortality are not available for adjusted in multivariable model.

This present study indicates that a dissection of less than 11 LNs, with less than 5 LN stations harvested is inversely associated with tumor recurrence after complete resection in clinical early stage NSCLC patients. Moreover, the positivity of dissected LN is an independent prognostic factor for tumor recurrence and overall mortality. SLND should be performed not only for identifying the exact positivity of dissected LN, but also for determining accurate nodal staging for NSCLC.

The authors would like to thank Miss Erlin Daley, research administrator of the Department of Thoracic Surgery, Icahn Medical School at Mount Sinai for review the English manuscript.

Ethical Statement: This study was designed as retrospective and approved by the Institutional Review Board of Faculty of Medicine, Chiang Mai University, Chiang Mai, Thailand with study code: SUR-2556-01811/Research ID: 1811, and ID of the approval 276/2013. Because this study is retrospective in nature and all procedures were routinely performed as part of the patients’ standard of care, the participants did not sign a specific research informed consent. However, all patients released their fully-informed written consent to perform all surgical procedures.