Lung herniation is a protrusion of the lung parenchyma beyond the normal boundary of the thoracic cavity (1). It is a rare condition, and most cases result from trauma (penetrating or blunt) or inadequate closure of the chest wall after thoracic surgery. Treatment of a lung hernia depends on symptoms, location, and size; there is no standard management of lung herniation. Since asymptomatic hernias generally remain asymptomatic, and do not change, they may not require treatment (2). For symptomatic lung herniation, surgical repair is generally recommended, if no surgical contraindications exist. Thoracotomy is more widely used than the thoracoscopic approach. Pericostal fixation of adjacent ribs with sutures is the most common way to repair chest wall defects; however, several other methods had been reported (3). We describe a case of traumatic lung herniation surgically repaired via the thoracoscopic approach. We repaired the chest wall defect with hernia mesh and an inner lining surgical membrane. We discuss and compare recent surgical treatments of traumatic lung herniation.

A 64-year-old man, with no history of systemic disease, was hit by a motor vehicle, and presented to our emergency room complaining of left knee and right hand pain. Physical examination revealed local tenderness and swelling of the left leg, limited range of motion due to pain, and an abrasion. Lower extremity computed tomography (CT) showed a non-displaced fracture of the medial condyle of the tibia, and a fibular neck fracture. Chest radiography (Figure 1) showed prominent bilateral lung markings. No other respiratory symptoms were complained and his vital sign was stable, no desaturation or tachypnea was presented, thus, no further examination was performed. The patient was discharged after application of a long leg cast. The patient presented to our ER three days later complaining of hemoptysis, dyspnea, chest pain, and swelling of the left chest. A 10 cm × 10 cm soft, mildly tender mass was identified over left chest wall. Erythema and ecchymosis were not identified in this area. Chest radiography showed ground glass pattern in the left lung, particularly in the left upper lobe, and subcutaneous emphysema in the neck and left axillary area (Figure 2). We reviewed his first Chest radiography we took three days ago and a subtle fracture over left 2nd fib was found. Chest CT showed the lung protruding through a chest wall defect, and a hemothorax (Figure 3). The patient underwent emergency surgery for lung herniation. Under general anesthesia, with double-lumen intubation and single lung ventilation, the patient was positioned in right decubitus position. The thoracoscopy was placed into the eighth intercostal space at the midaxillary line; a working port was placed in the seventh intercostal space in the auscultatory triangle; and an anterior working port was placed in the fifth intercostal space. Under thoracoscopy, partial herniation of the left upper lobe through the anterior chest wall defect was identified (Figure 4A). Disruption of the visceral pleura, with focal congestion, was noted on the herniated lung parenchyma (Figure 4B). The herniated lung was reduced, and a wedge resection of the diseased lung parenchyma was done. The 4 cm × 5 cm chest wall defect (Figure 4C) was repaired with a hernia mesh (BARD™ Mesh, Davol Inc.), and an inner side attached surgical membrane (Gore-Tex® Surgical Membrane, W.L. Gore & Associates, Inc.) was fixed with titanium spiral tacks (Auto Suture ProTack™ Fixation 5 mm, Covidien; Figure 4D). A 28-French chest tube was placed via the camera port. After surgery, the patient was admitted to the intensive care unit. The patient was extubated on the second postoperative day, and the chest tube was removed on the eighth postoperative day. The hospital course was uneventful, and the patient was discharged in stable clinical condition, two weeks after the operation. A chest radiograph, obtained in the outpatient department, one month after surgery showed clear lung fields and resolution of subcutaneous emphysema (Figure 5). There was no recurrence during the one year of follow-up. 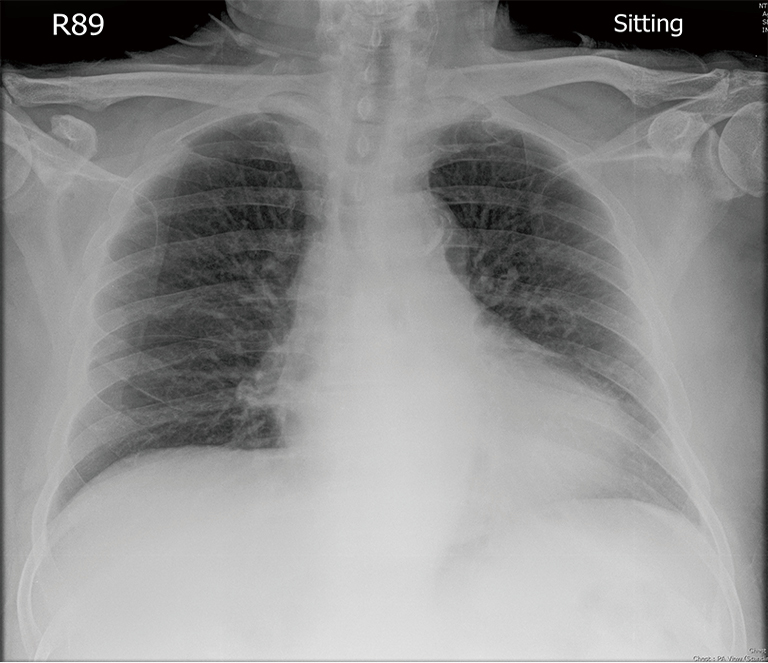 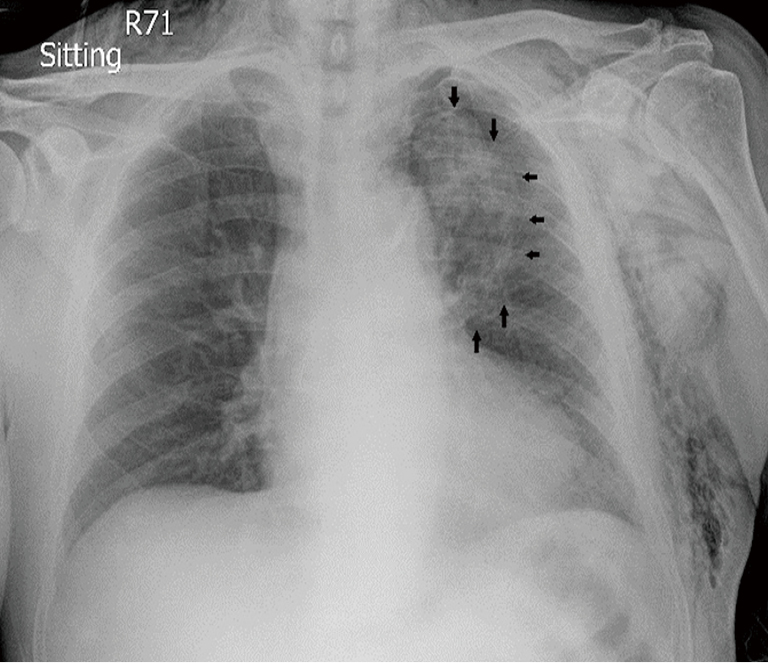 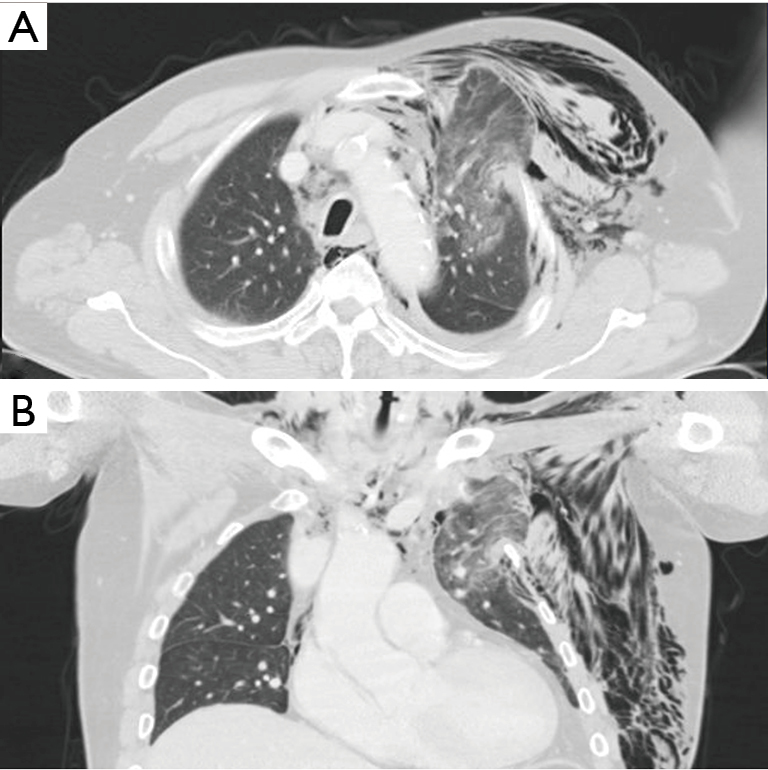 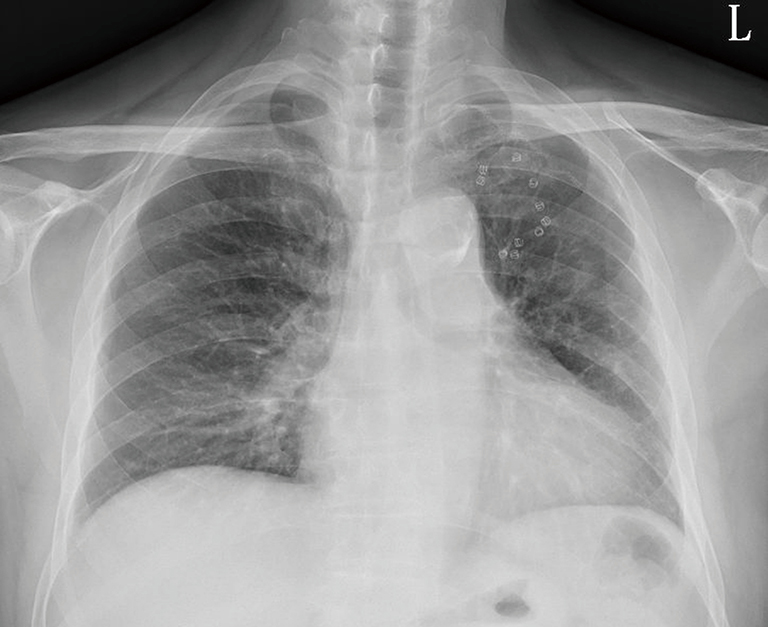 Figure 5 The chest radiograph obtained one month after surgery.

There is no consensus on the managements of lung herniation. The treatment can be conservative, or a surgical repair. Conservative treatment includes compression with pads and corsets, treating the underlying cause, and weight loss (7). However, chest wall compression is associated with limited thoracic wall motion, reduced pulmonary compliance, and the risk of atelectasis and infection (3). Wani et al. presented a case of spontaneous intercostal lung herniation complicated by rib fractures. Because of the patient’s high surgical risk, the case was managed conservatively. However, this patient experienced poorly controlled chest pain and shortness of breath, and the herniation progressed both clinically and radiologically, suggesting that surgical intervention is ideal if clinically feasible (1). Surgical decisions are made based upon the size of the hernia, the symptoms (pain, dyspnea), the risk of parenchyma incarceration (for example, difficult hernia reduction or small chest wall defect), and the patient’s comorbid conditions (7,8). In reported cases, the surgical techniques varied, and included direct closure of the defect, and closure with mesh or muscle flaps. Fackeldey et al. (3) reported that the most commonly used surgical method, after resecting the incarcerated lung parenchyma, is pericostal fixation of the adjacent ribs with absorbable sutures, via thoracotomy. For smaller defects, pericostal fixation is useful, but larger defects require reconstruction of the chest wall, using surrounding tissues or synthetic materials (7). Plastic surgical procedures, such as fascia lata grafts or muscle flaps, are seldom used in large thoracic wall defects. There are nonabsorbable (polypropylene; Prolene, Marlex, and expanded polytetrafluoroethylene; ePTFE, Gore-Tex) and absorbable (polyglactin; Vircyl) meshes that can be used in the repair of lung herniation. However, complications, such as fistula formation, seroma, and infection, had been reported with the use of meshes (3).

Most lung hernia repairs are performed via thoracotomy; however, there are several case reports demonstrating successful management using thoracoscopic assists (8-13). Owing to the difficulty of repairing the bony defect of chest wall from inside of thorax, most thoracoscopically managed cases are of a hybrid nature, and the important procedure of repair/reconstruction is done under direct visualization, through a mini-thoracotomy with thoracoscopy guidance. Spiral tacks, which are commonly applied in laparoscopy inguinal hernia repair, have been used for the management of lung hernia (9,13), and improve the ease of intracorporeal fixation. Van Den Bossche et al. (9) first described this method in a case of spontaneous intercostal lung hernia, which was repaired by using a polypropylene mesh. Hebra et al. (13) reported a pediatric patient, with a delayed onset handlebar intercostal hernia, 10 days after blunt chest trauma, managed with elective thoracoscopy. The defect was covered by using a Gore-Tex patch, which was fixed with multiple spiral tacks. No recurrence noted after one year of follow-up. In our case, there was no remaining intercostal muscle or fascia. Therefore, we used a dual-layered material to provide strength to the repair, and to prevent pleural adhesion.

In this case, the patient presented after a traumatic injury, complaining of pain and hemoptysis. Clinical and radiographic findings indicated the patient had a lung hernia. We successfully used a total thoracoscopic approach, with hernia mesh and surgical membrane, to repair the traumatic lung herniation. At the one-year follow-up, the patient reported no associated symptoms, and there was no evidence of recurrent herniation. We used a double-layer repair, which is stronger than either direct repair or the use of a surgical membrane. We suggest that, under the right circumstances, thoracoscopic surgery is a safe and effective method of treating traumatic lung herniation.