During the past two decades, thoracoscopic procedures have increasingly gained acceptance specially with the introduction of video-assisted thoracoscopic surgery (VATS) major pulmonary resections. Since introducing the VATS programme at our hospital in July 2007, we have evolved from 3 ports to single-port technique (introduced in June 2010) for lobectomy and pneumonectomy (1). Recent studies have reported on the feasibility and safety of thoracoscopic pneumonectomy compared with conventional thoracotomy for lung cancer (2).

The uniportal thoracoscopic resection of the whole lung is technically easier to perform than a lobectomy because the fissure do not need to be managed. However, extra care must to be taken during dissection and division of the main artery and transection of the main bronchus.

Once the lung is removed a radical mediastinal lymph node dissection is performed.

Initially, a 4-5 cm incision is made in the 5th intercostal space in the antero-lateral position (Figure 1). We introduce a 30 degree, high-definition, 10-mm thoracoscope in the posterior part of the incision and explore the chest cavity. Digital palpation confirms the need for a pneumonectomy. We only perform pneumonectomy when sleeve resection is not a feasible option. Optimal exposure of the lung is key to facilitate the dissection of the structures and to avoid instrument malposition (Figure 2). 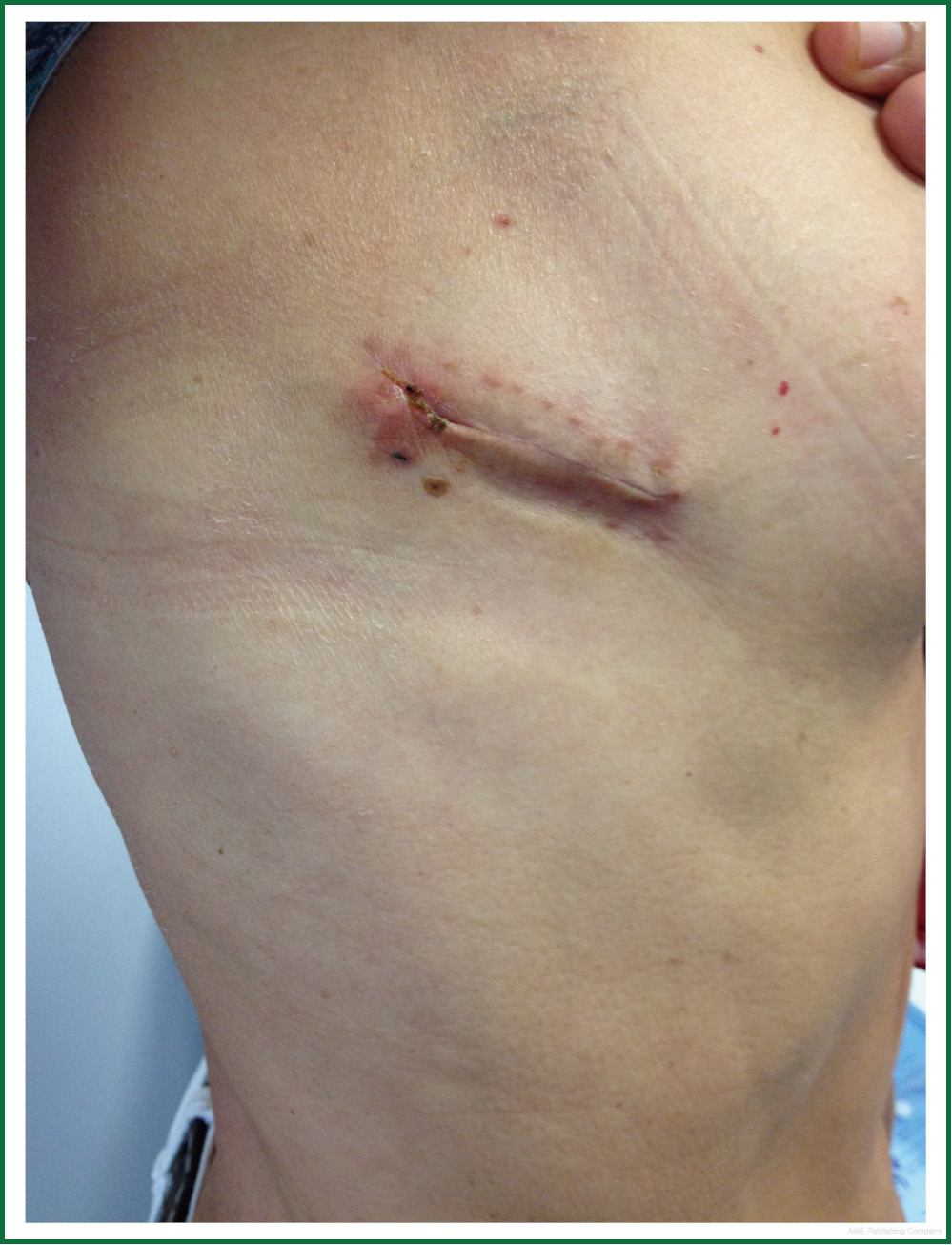 Figure 1. Incision on the right side. 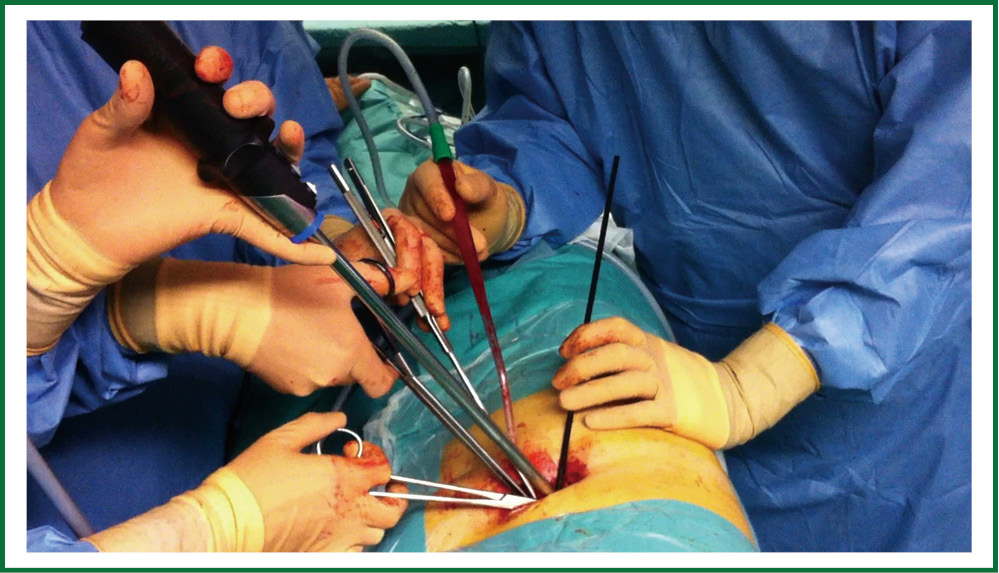 On the right side the procedure is similar to that of the left, except for differences especially concerning the anatomy of the right pulmonary artery and its relationship to the main bronchus and superior vena cava.

The transection of azygos vein is not necessary but in some cases could help the mobilization of main pulmonary artery and paratracheal lymph node dissection. The lung is retraced posteriorly and the upper and inferior pulmonary vein are dissected and encircled. To dissect the main pulmonary artery we recommend to first divide the boyden trunk with vascular endostapler or vascular clips (click aV, Grena). The uniportal approach provides a direct view to the artery. Once this branch is stapled, the lung is retracted caudally so as to havea good angle to staple the superior vein (Video 1). The next step is the dissection and division of inferior vein. We retract the lung cranially, towards the apex of the chest, divide the pulmonary ligament and use an endostapler to divide the inferior vein (Video 2).

Another option is to divide first the superior pulmonary vein by using 2 loads of (linear vascular stapler. and we could easily dissect the main pulmonary artery (therefore, the division of the boyden trunk is not necessary as the first step).

Finally the main bronchus is divided by using a bronchial endostapler (a linear stapler is not usually needed on the right side) (Video 2). Bronchial stump coverage with a vascularized flap is not usually performed. The lung is extracted in a protective bag. A systematic complete lymph node dissection is done upon completion of the procedure. A single chest tube is placed in the posterior part of the incision (Figure 3). If the tumor is too big to be removed by VATS, we enlarge de incision at the end of the surgery. In case of huge tumors we use a rib retractor to take out the specimen. In this unusual cases we recommend to perform another incision at the end of the surgery only to insert the chest tube (Figure 4). 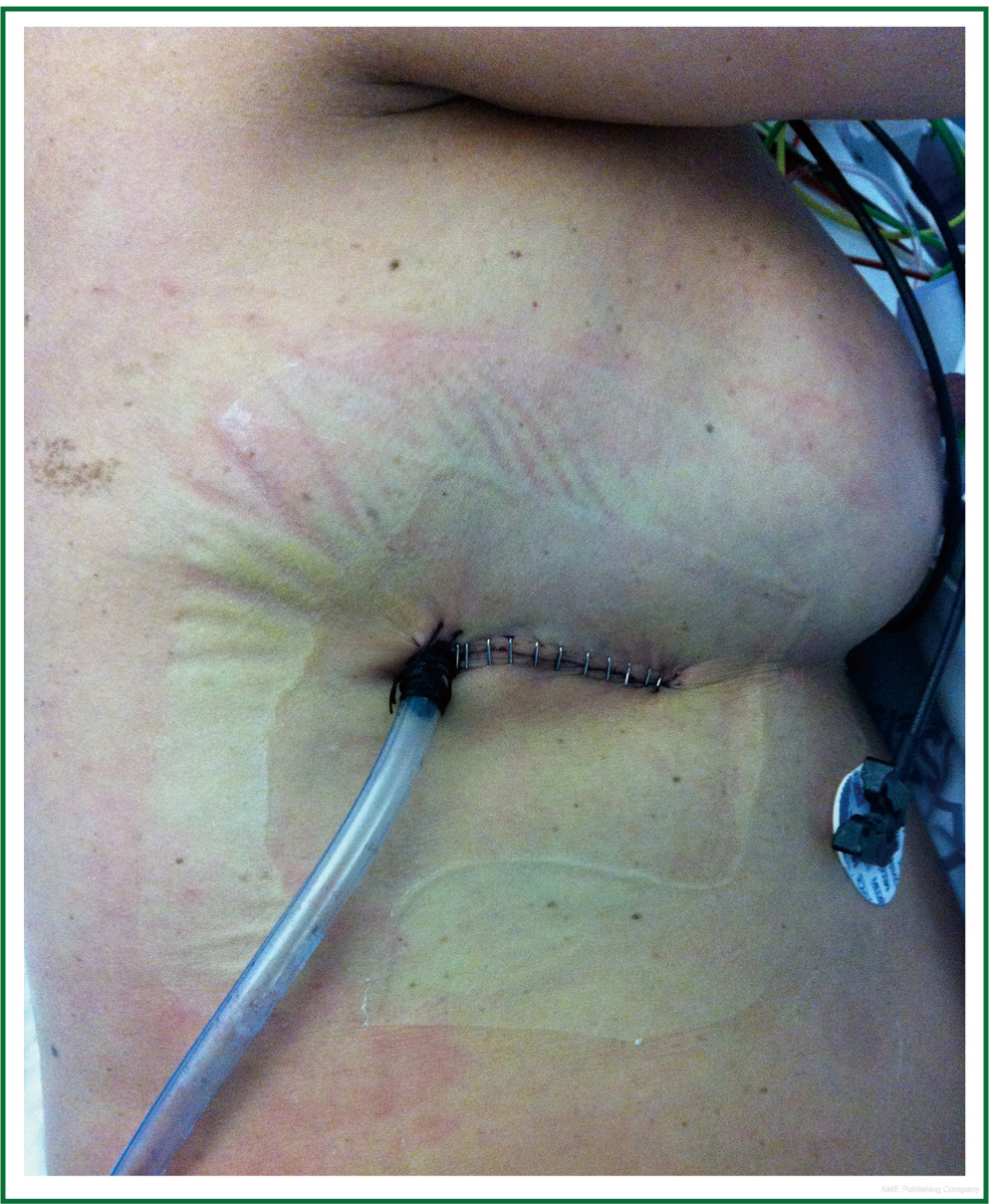 Figure 3. Postoperative result of right pneumonectomy with chest tube placed in the posterior part of the incision. 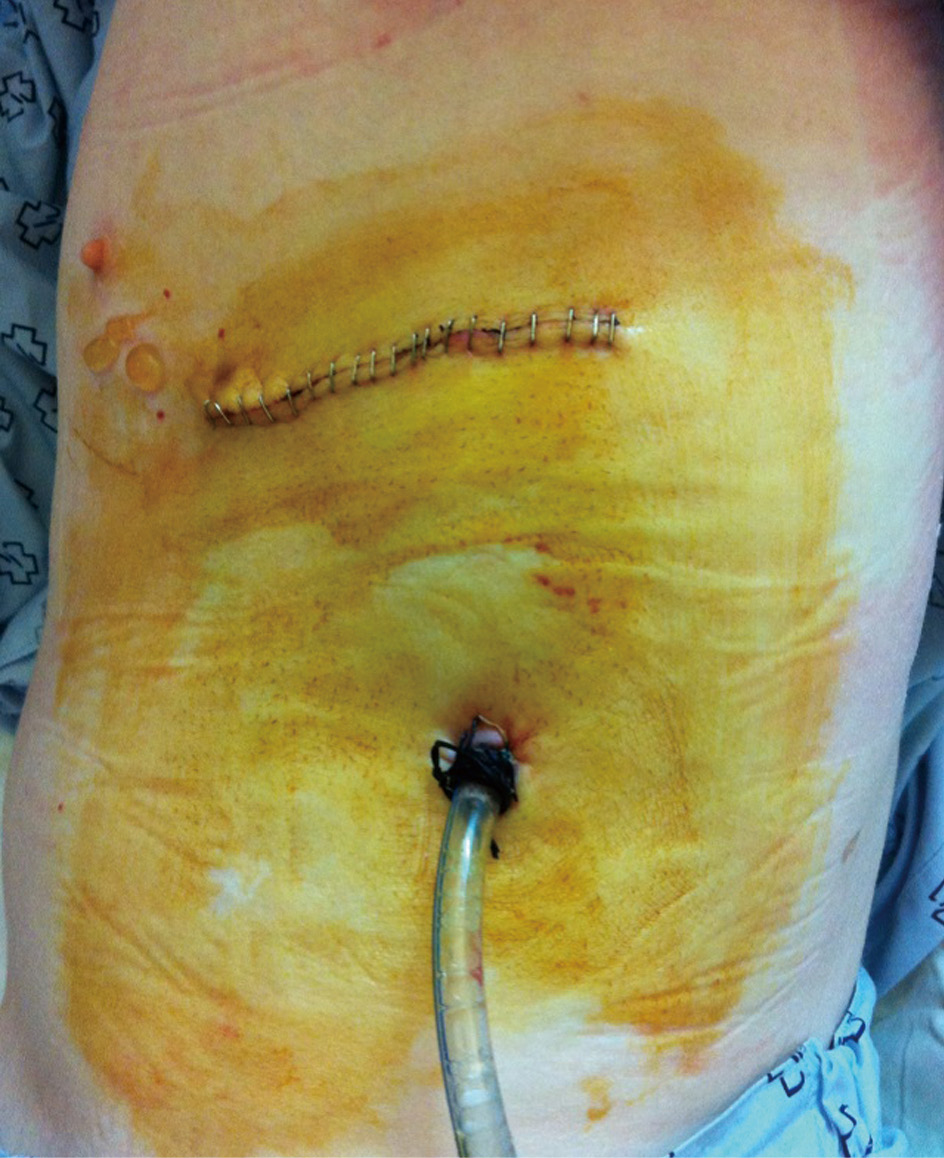 The lateral aspect of the mediastinum is approached. The sequence for pneumonectomy on the left side could be different to the right side and includes the main pulmonary artery, superior pulmonary vein, inferior pulmonary vein, subcarinal lymph node dissection, and left mainstem bronchus.

We retract the lung posteriorly and inferiorly and we start the dissection by opening the mediastinal pleura to expose the pulmonary artery and the upper vein. It is important to remove the lymph nodes from the aortopulmonary window and divide the posterior pleura to better expose the artery (Figure 5). On the left side, the uniportal approach provides with an excellent and direct view to dissect and divide the main artery as the first step (Figure 6). The dissection and retraction of the upper pulmonary vein helps the exposure of the main artery. The dissection on the right side of the main pulmonary artery is very complex before the upper vein is transected). We divide the pulmonary artery by using a vascular endostapler (Video 3). The superior pulmonary vein can then be divided with an endostapler. This is the most frequent sequence to divide the artery on the left side. 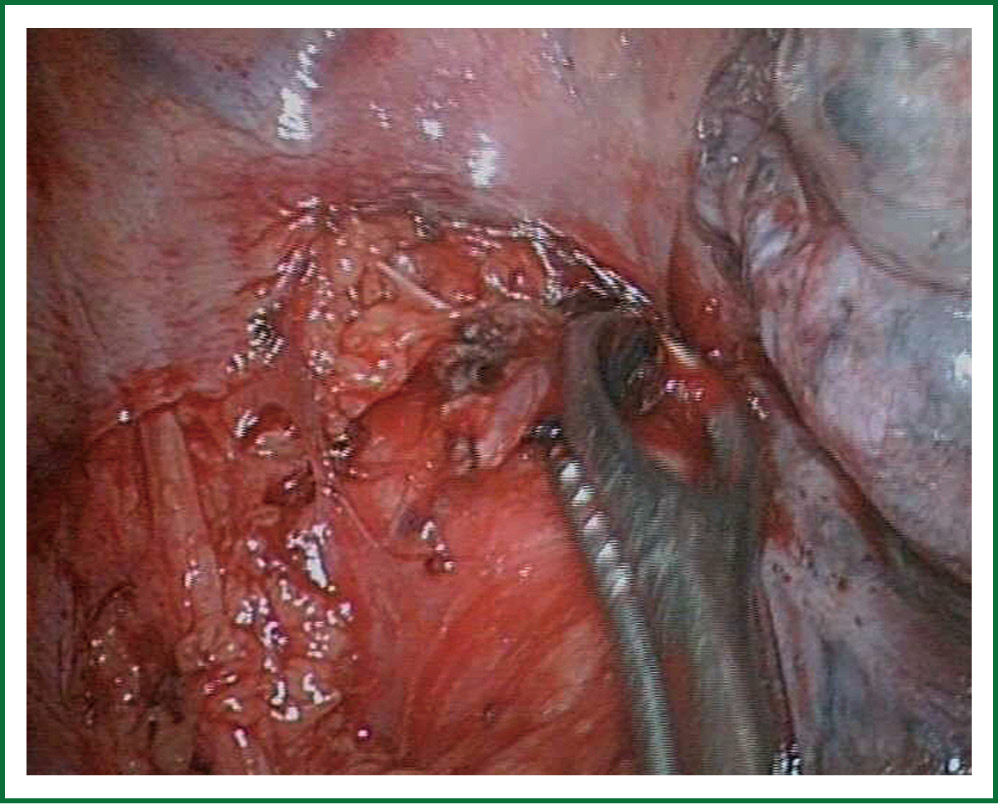 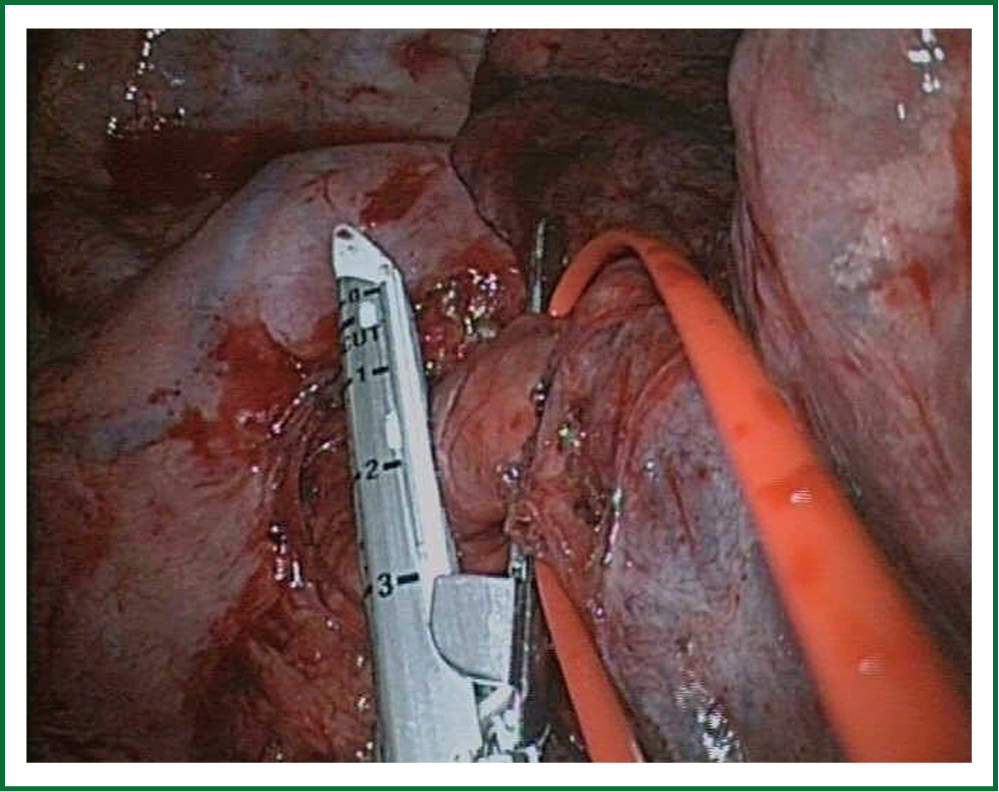 Access to the inferior pulmonary vein is granted by taking down the pulmonary ligament. The inferior vein can then be easily divided with an endostapler after retracting the lung cranially (Video 4). Subsequently, the lung is retracted anteriorly to perform a subcarinal lymph node dissection and to better expose the main bronchus. The lymph node dissection of level 5 mobilizes the superior aspect of the mainstem bronchus and level 7 lymphadenectomy mobilizes the posterior aspect of main bronchus.

When the angle for artery is not adequate for endostaplers we recommend to use a linear stapler for the main artery. We put the pin down and pull the lung through the stapler and we place an additional stapler, distally to the artery to avoid back bleeding when artery is cut with scissors or long knife.

The bronchus is dissected as proximal as possible after all the vascular elements have been divided (Figure 7). The bronchus is elevated by retracting the whole lung and we recomend to use an linear stapler used in open surgery, either a TA 30 (Covidien Inc, Mansfield, MA) or TX 30 (Ethicon Endosurgery, Cincinnati, OH). The pin is put down and we pull the lung through the stapler to achieve a short bronchial stump (Video 5). Bronchial stump coverage with a vascularized flap is not usually performed. A single chest tube is placed in the posterior portion of the incision at the end of the surgery (Figure 8) 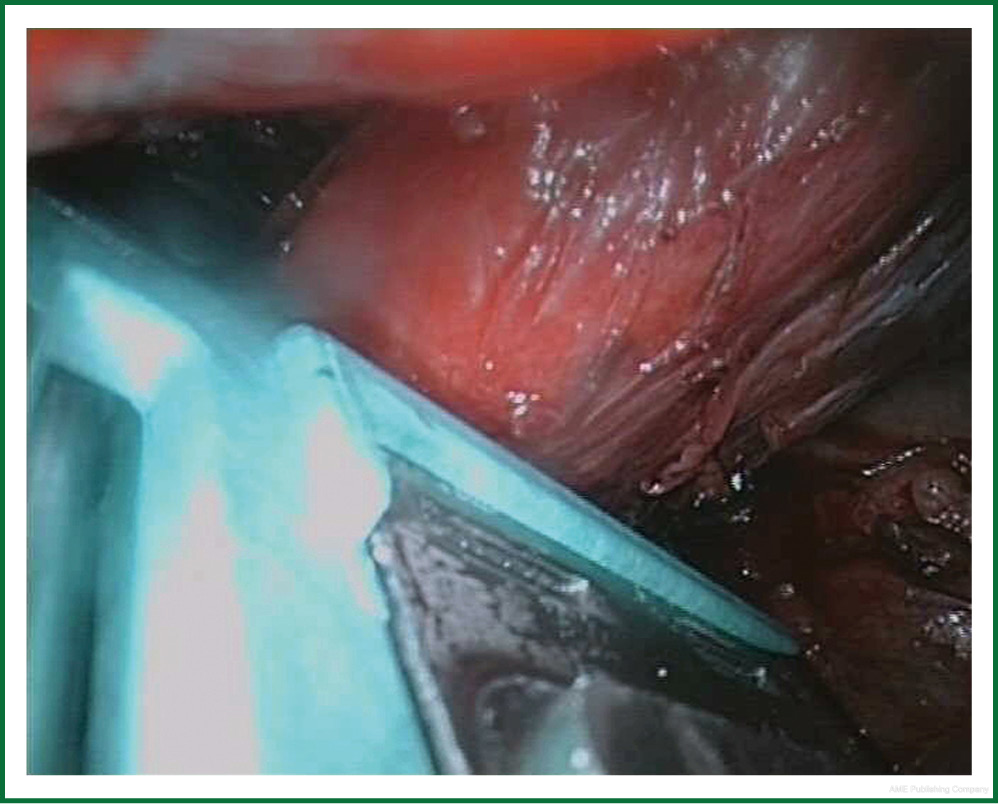 Figure 7. Use of TA 30 linear stapler to transect the left main bronchus. 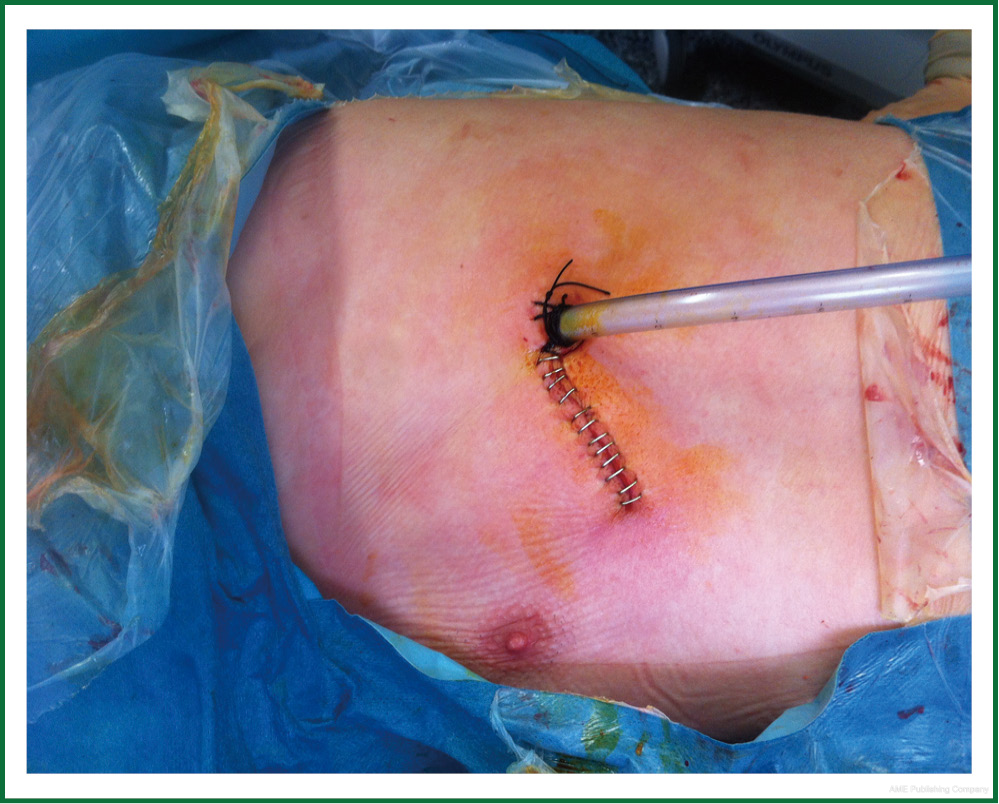 Figure 8. Single chest tube placed in the posterior portion of the left incision.

The performance of intrapericardial pneumonectomy is more complex but the steps are similar to standard pneumonectomy (Video 6). The pericardium is opened with scissors or cautery between the phrenic nerve at the anterior portion of the superior pulmonary vein. The incision is continued upward toward the pulmonary artery and downward toward the inferior pulmonary vein. Extra care must be taken in case of adhesions or fibrotic tissue. The intrapericardial proximal division of vessels facilitates the insertion of staplers to divide the main artery as the first step.

The main pulmonary artery and both pulmonary veins are encircled. The aortopulmonary window is dissected taking care to identify and divide the ligamentum arteriosum and to identify and protect the left recurrent laryngeal nerve which lies in the operative field. The main artery is divided by using an endostapler after caudal retraction of lung. Once the artery is divided the upper vein is stapled holding the lung in the same position. To divide the inferior pulmonary vein the lung is retracted cranially. The use of TA linear stapler for vessels is not usually needed but is an option in case of no good angles for endostaplers. The bronchus is mobilized from the pericardium and a TA stapler is used to transect the bronchus as deep as posible, closest to the carina.

The pneumonectomy can also be performed removing both lobes separately (lower and upper lobectomy). We have performed this procedure in case of N1 persistent interlobar lymph node affection discovered after lobe removal or positive margins (when sleeve reconstruction is not possible). It is an option to accomplish the pneumonectomy performing upper and lower lobectomy separately. If the lower lobectomy is performed first we need to assure that the main artery and bronchus is stapled as proximal as posible in order to minimize the risk of fistula (Video 7).

Uniportal Re-VATS for completion pneumonectomy refers to surgery intended to remove remaining lobe not resected during a previous operation. The procedure carries a higher risk of operative mortality and morbidity than does standard pneumonectomy, specially when chemo or radiotherapy has been previously administered (Video 8).

The use of induction chemotherapy or radiotherapy may increase the fibrotic tissue surrounding the hilum. This makes thoracoscopic surgery harder but does not necessarily contraindicate the procedure. A careful vascular dissection is mandatory and a sponge stick should always be available for compression in case of major bleeding. An energy device facilitates the dissection of hilar structures (Figure 9). Intrapericardial resection is usually frequent for completion pneumonectomy cases, especially after induction treatment. 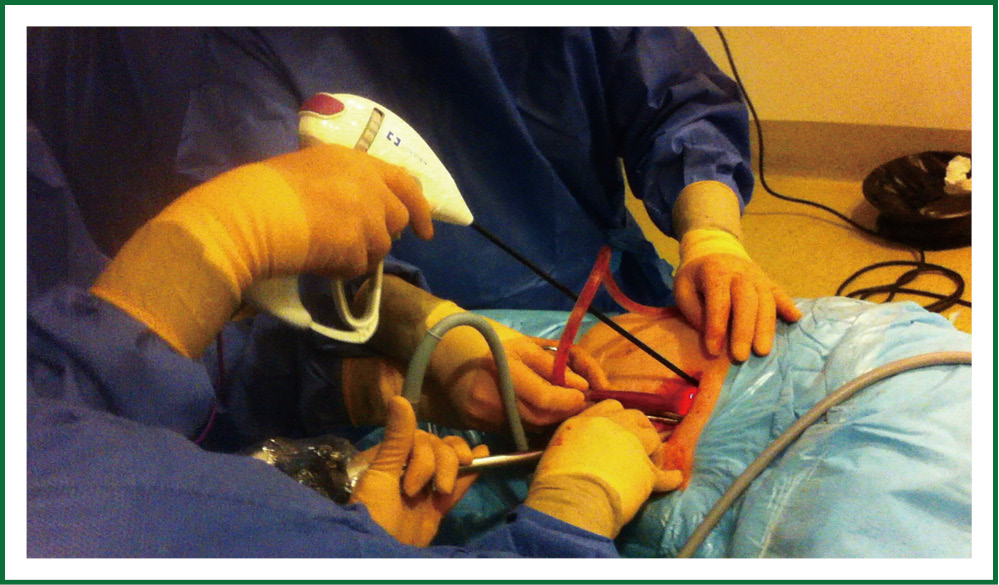 Recent advances in surgical and video-assisted techniques have allowed minimally invasive pneumonectomy to be safely performed. VATS pneumonectomy is not a new procedure. In fact, it was initially reported 15 years ago and associated with less postoperative pain and a faster return to normal activities (3). Despite this, there have been only a few series published (2,4).

Most of the authors describe the VATS approach to pneumonectomy using 3 to 4 incisions (5). The surgery can also be performed with 2 incisions with similar outcomes (6) and even by a single-incision (7).

Single-incision pneumonectomy is a feasible and safe procedure from a center with consistent experience with VATS lobectomy (7). Since June 2010, we started performing VATS major pulmonary resections by a single-incision and non rib-spreading (8). Individual division of all hilar structures and mediastinal lymph node dissection was performed in all patients. To date, we have performed 10 uniportal VATS pneumonectomies (80% intrapericardic; 4 right, 6 left). The mean surgical time was 201±40 minutes (range, 130-250 minutes).The mean number of nodal stations explored was 5.4±1 (range, 4-7) with a mean of 17.1±7 (range, 9-29) lymph node resections. The mean tumor size was 4.8±2.1 cm (range, 3-12 cm).The median length of stay was 4 days (range, 3-12 days). One patient needed a reoperation by VATS due to bleeding on the fifth postoperative day.

The size of the utility incision is comparable to the ones commonly used for double or triple-port approach. The incision is made at the level of the 5th intercostal space in a more lateral position as usually reported with VATS. The proper placement of this incision and an adequate exposure of the lung is crucial in order to get good access to the hilar structures. The parallel instrumentation achieved during the single port approach mimics inside the maneuvers performed during open surgery. The direct view to the target tissue facilitates the hilar dissection and the bleeding control in case of vascular injury. In our experience, resulting from the evolution from multiple port to single port VATS, the bleeding can be better controlled through a single incision approach when performed by experienced uniportal VATS surgeons.

Sequential extraction of the upper and lower lobe in a protective bag facilitated the entire lung removal through the 4-5 cm utility incision. We recommend to open the external bag neck to allow for air release and subsequently pull and slide the lobes. Decompression of blood and air from the surrounding pulmonary parenchyma facilitates the entire lung extraction.