Supracarinal dissection of the oesophagus and lymphadenectomy by MIE

Since the first report by Dallemagne with the patient in the left lateral position in 1991 and by Cuschieri in the prone position in 1992, minimally invasive oesophagectomy for cancer has gradually become popular and has been performed widely. After learning the technique, the previously undescribed fine anatomy, namely the microanatomy, became obvious under magnified view obtained by positioning the camera at close vicinity to the dissection and the thoracoscopic surgeon’s knowledge of the layer structure in the mediastinum became profounder. Reducing surgical trauma in the mediastinum by rational dissection along the anatomical layers is an important factor in minimally invasive surgery together with reducing the thoracic wound.

Three-field lymphadenectomy has been performed routinely since the mid-1980s in Japan (1), but the extent of lymph node dissection is still in discussion. According to the Efficacy Index [the incidence of metastasis to a region (%), multiplied by the 5-year survival rate (%) of patients with metastasis to that region and divided by 100] (2), the upper mediastinal nodes, such as the bilateral recurrent nodes and tracheobronchial nodes, should be dissected precisely, although dissection of these nodes requires substantial effort by surgeons and is associated with a risk of postoperative complications. The sensitivity for diagnosing the presence of metastasis in each lymph node station is low (3); therefore when retrieving nodes likely being metastasized, there is no excuse for omitting dissection of all nodes. In this chapter, the upper mediastinal microanatomy, which is essential for precise dissection through thoracoscopy, will be demonstrated.

As the left lateral position has been the preferred approach since introduction of thoracoscopy at our institute (4), all figures shown here were obtained from patients in the left lateral position (the upper and left sides correspond with the ventral and cranial aspects, respectively). In order to correspond with monitor images obtained from patients in the prone position, the figures need to be rotated 180 degrees to the right.

Table 1 shows our indication for VATS. Principally, we do not indicate VATS for patients who received radiation, because mediastinal fibrosis caused by radiation makes microanatomy obscure.

Principle of thoracoscopic dissection and layer structures in the upper mediastinum

Figure 1 demonstrates the layer structure of the upper mediastinum. The outermost structure under the mediastinal pleura consists of the neural branches. The sympathetic branches from the right trunk dominate over the left and surround the oesophagus and thoracic duct. Black heavy arrows indicate our layer of dissection for total mobilization in the upper mediastinum. Almost all structures divided in the mediastinal mobilization run transversally, except the oesophagus, vagal nerves, and thoracic duct. Therefore, mobilization should be done transversally or orthogonally to the aorta and tracheobronchus. Identifying the structures under magnified view, the neural branches are divided without sealing to avoid the use of energy devices and unnecessary tissue damage. Under magnified view, the epineurium of the recurrent and vagal nerves can be identified easily as shiny fine membrane with fine vessels running longitudinally (Figure 2). As no vessel penetrates the epineurium in the dissection field, exposing the epineurium is the ideal layer of dissection. Under magnified view, the tiny lymph node structure is clearly visible. Histologically, only the afferent lymphatic vessels are located on the convex capsule of the lymph node (Figure 3), while the artery and vasoactive unmyelinated nerve, and the vein and efferent lymphatic vessel are located at the hilum. These hilar structures serve to fix the node in place. In other words, each node has its own direction of hilar fixation. An understanding of the direction of the fixation facilitates nodal dissection (Figure 4). 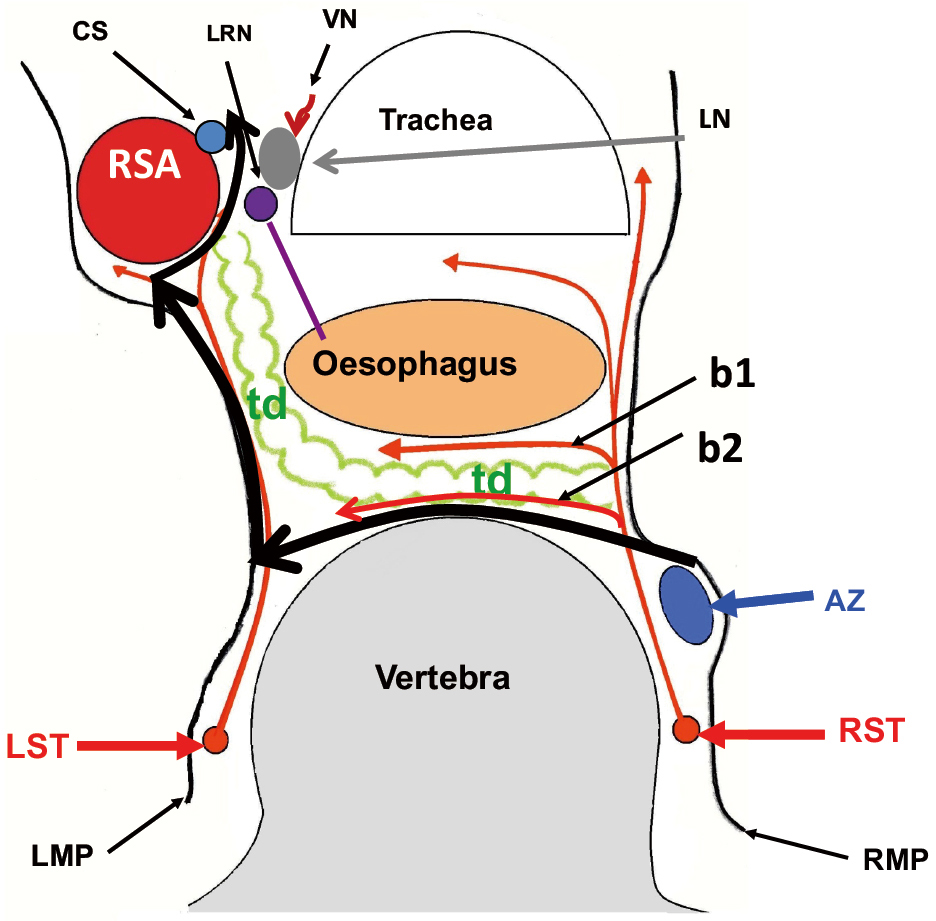 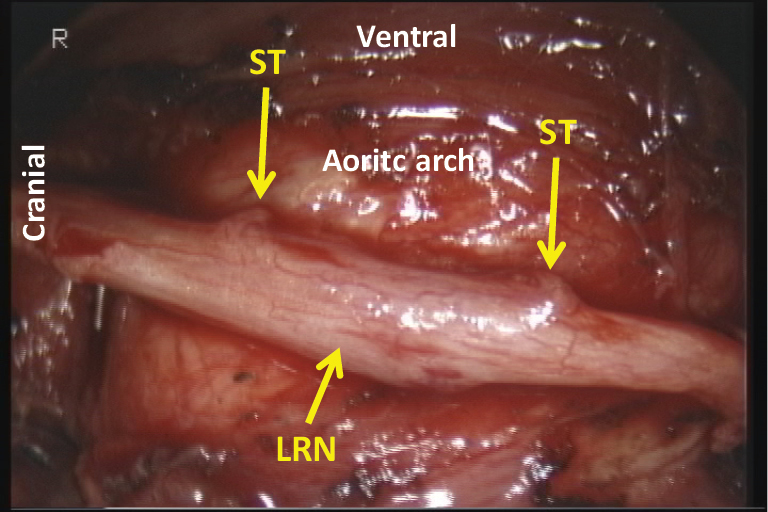 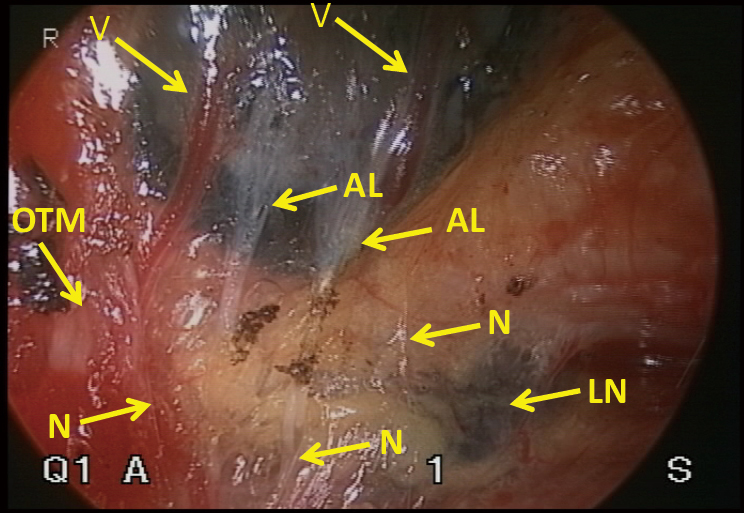 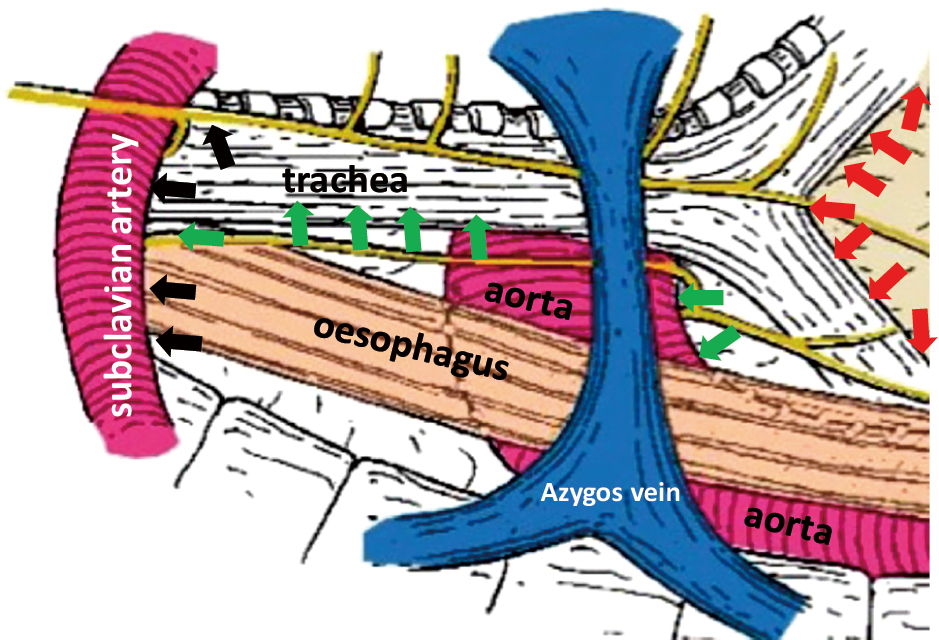 Dissection of the right recurrent nodes 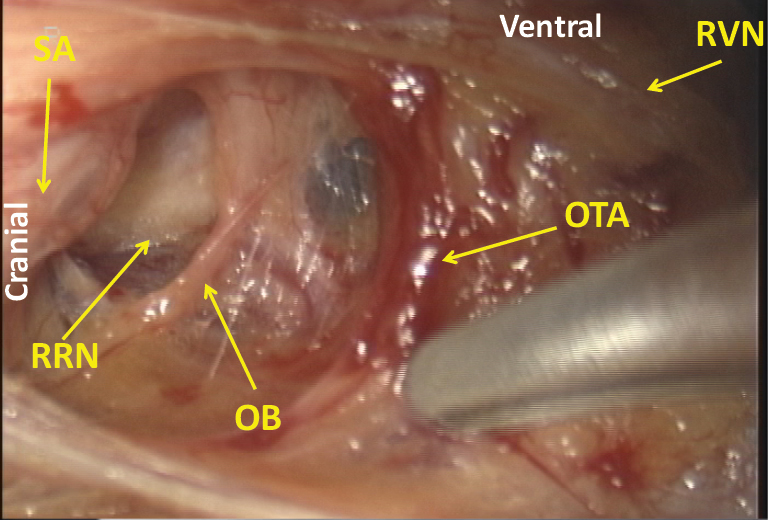 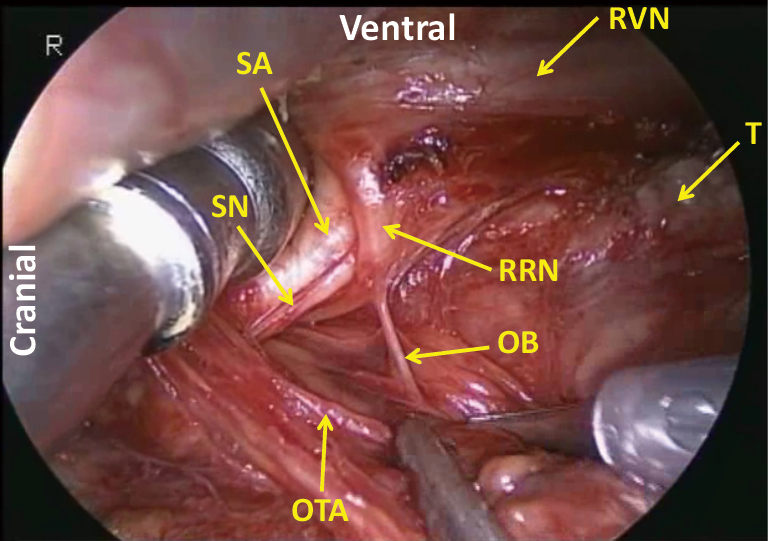 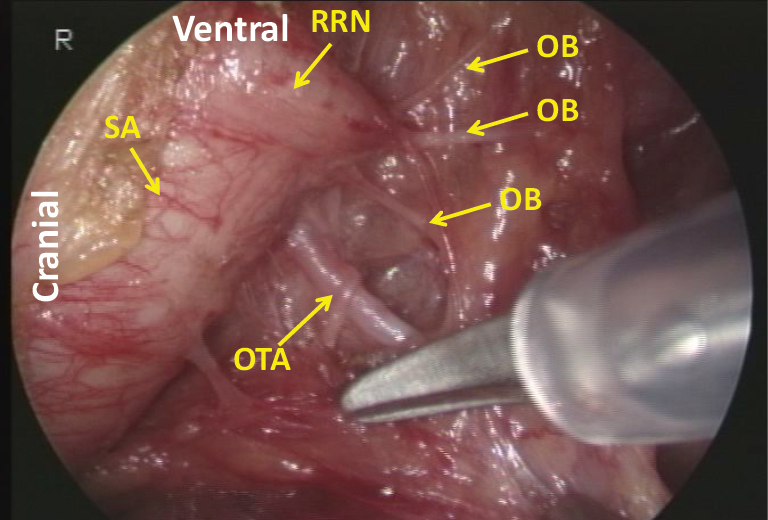 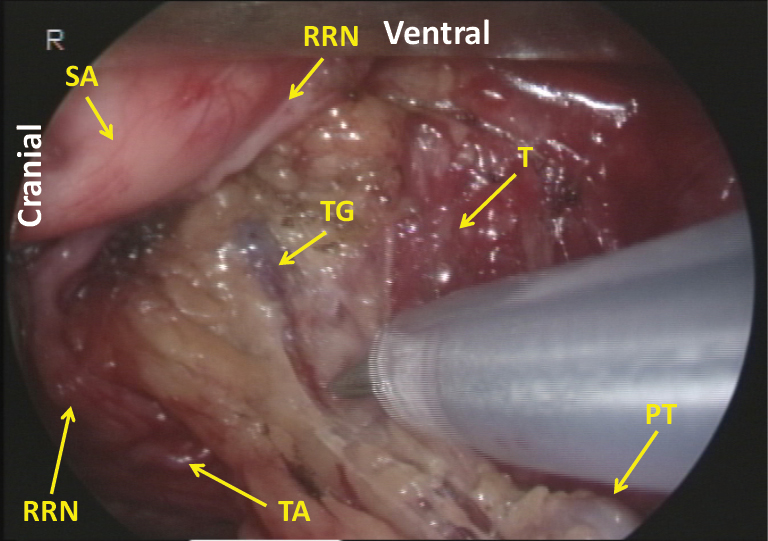 Mobilization of the dorsal aspect of the esophagus

Cranial to the aortic arch, the dorsal aspect of the oesophagus is rather avascular and anatomically simple. However, there can be three planes of dissection according to the right sympathetic branches (Figure 9). When the thoracic duct is preserved, dissection should be conducted along b1 in Figure 1. For total mediastinal mobilization, b2 in Figure 1 is excised and the branches of the left sympathetic trunk are cut (Figure 10), then the left mediastinal pleura are exposed (Figure 11). The azygos arch is mobilized and divided following double ligation. The ligated ends are retracted through the chest wall ventrally and dorsally to enhance mediastinal exposure. The pleura is then incised along the anterior edge of the vertebral column dorsally and the right bronchial artery is doubly clipped and divided at its root as it bifurcates from the intercostobrachial artery (third intercostal artery) (Figure 12). Dissection is continued exposing the ventral aspect of the intercostobrachial artery as far as the right wall of the aortic arch. Then the right wall of the aortic arch is exposed. Cranial to the aortic arch, dissection is carried out ventrally, exposing the left mediastinal pleura, until pulsation of the left subclavian artery is recognized. Because the thoracic duct is covered with this fibrous membrane, the fibrous membrane should be divided for combined resection of the duct (Figure 13). The stump of thoracic duct shows particular appearance because of its intramural smooth muscle (Figure 14). At the level of the pulmonary hilum, the lymphatic collecting ducts from the chest wall and the mediastinum, draining into the thoracic duct, are observed (Figure 15). 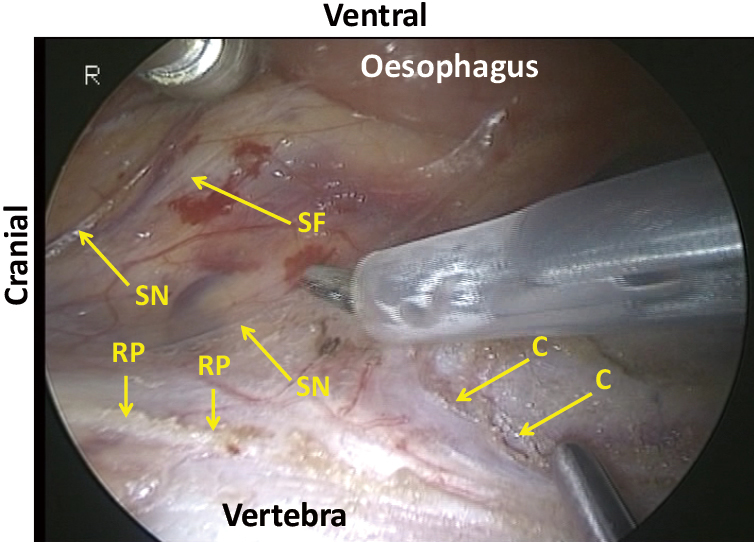 Figure 9 Mobilization of the dorsal aspect of the oesophagus (shallower layer). RP, cut edge of the right mediastinal pleura; SN, branch of sympathetic nerve (indicating b1 in Figure 1); C, cut edge of the layer consisting b1 in Figure 1; SF, Sibson’s fascia (the thickened portion of endothoracic fascia between the first rib and the transverse process of the seventh cervical vertebra. The vessel runs parallel commonly). 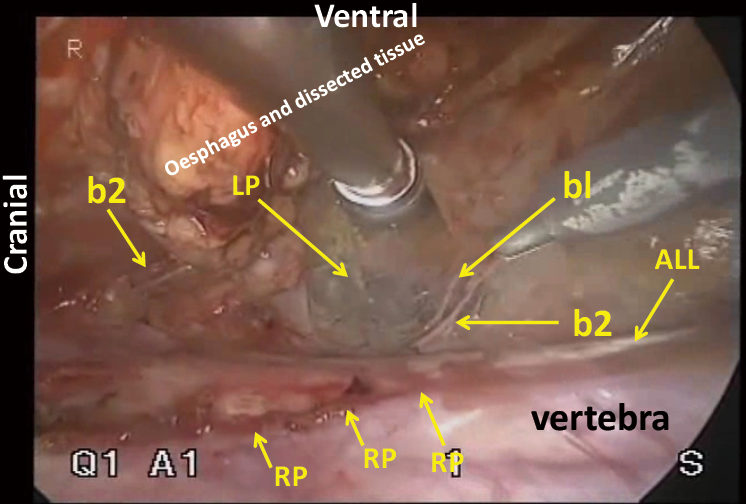 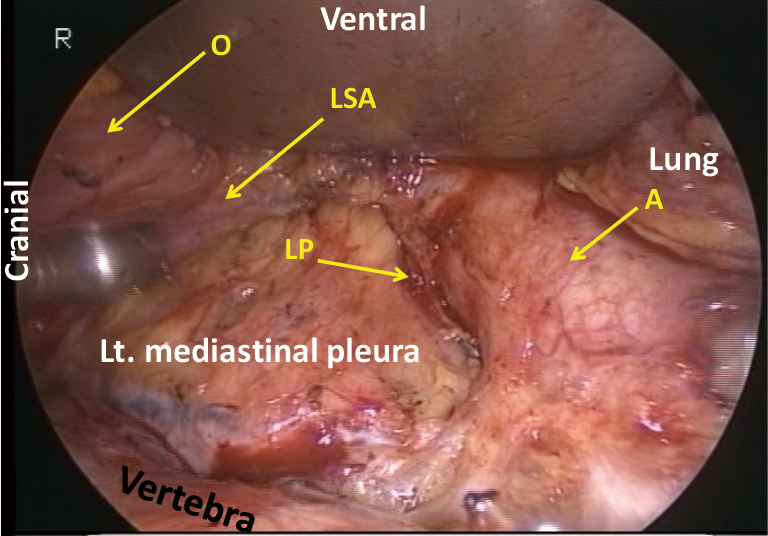 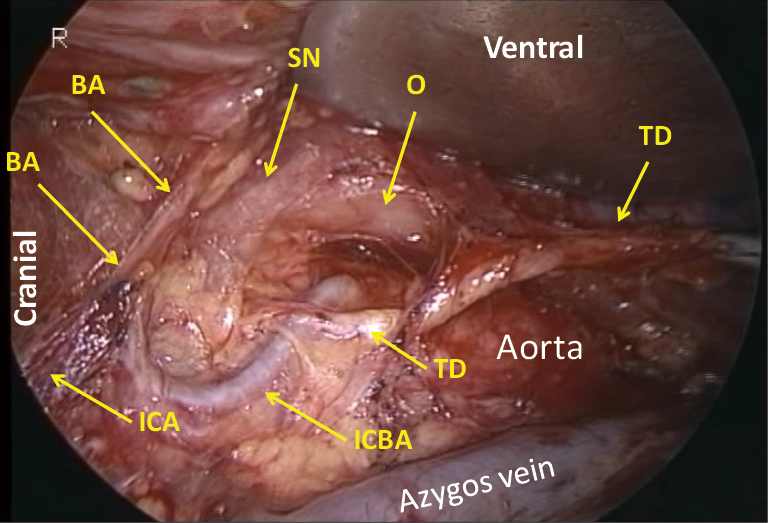 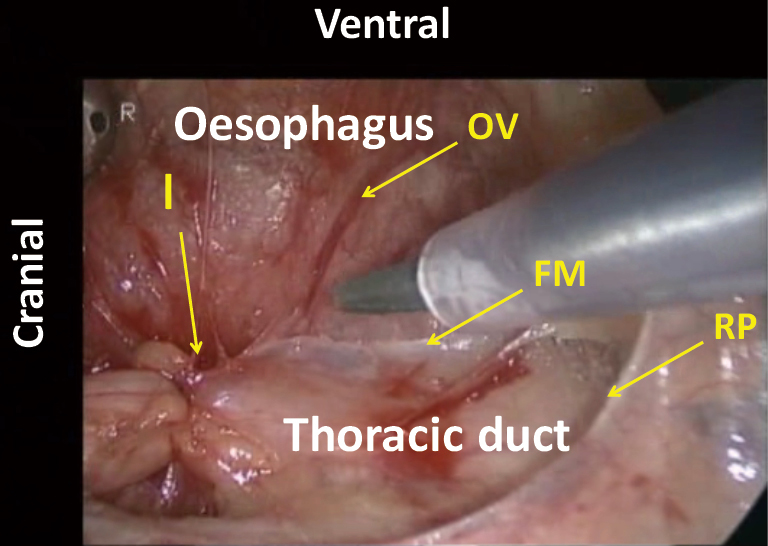 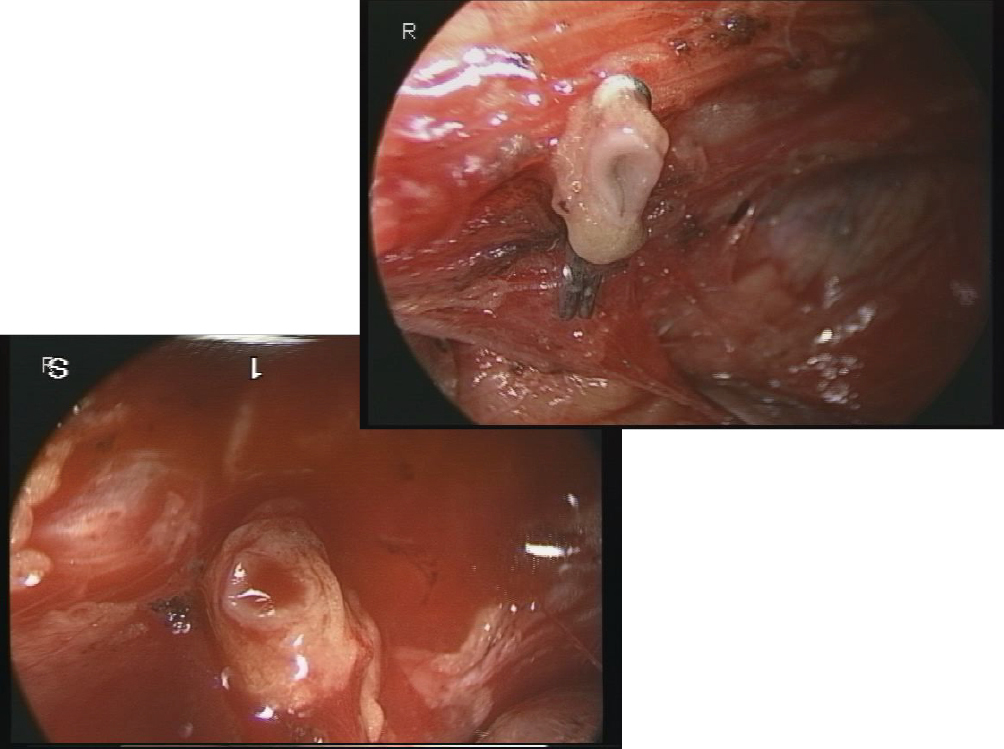 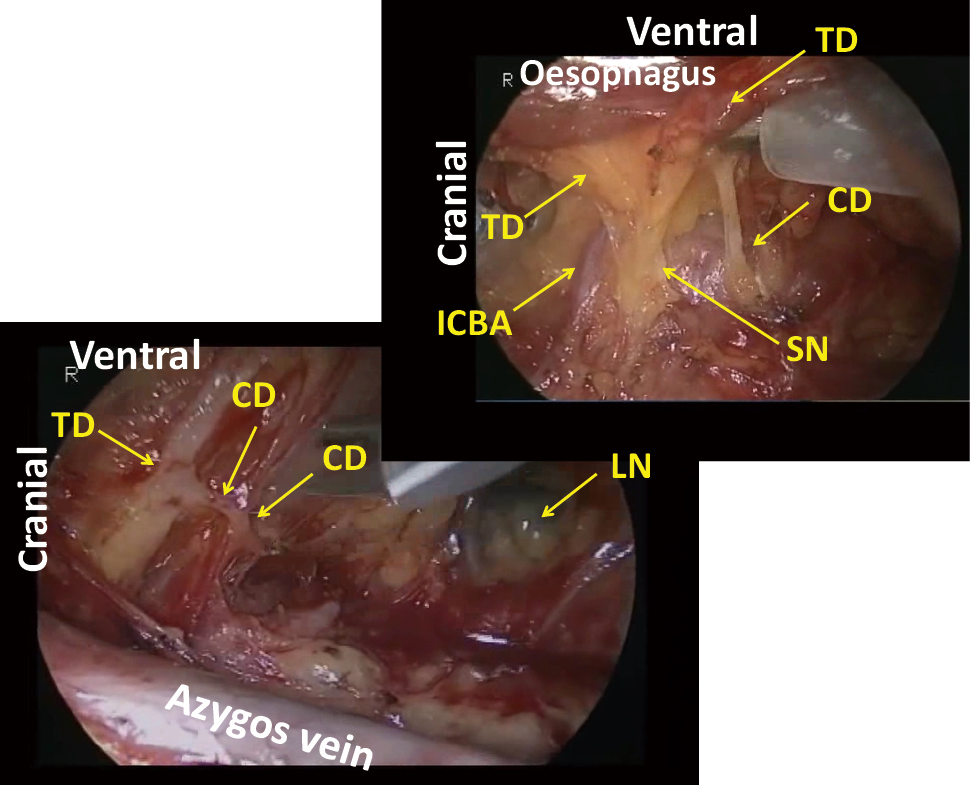 Mobilization of the ventral aspect of the esophagus 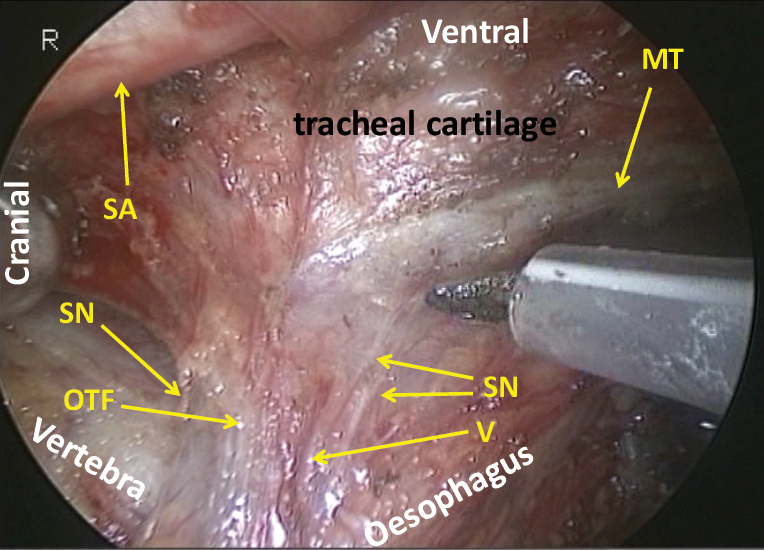 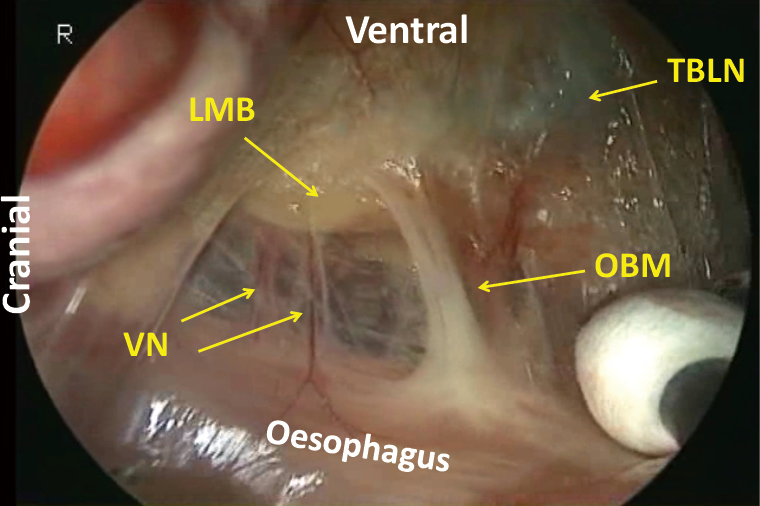 Dissection of the left recurrent nodes 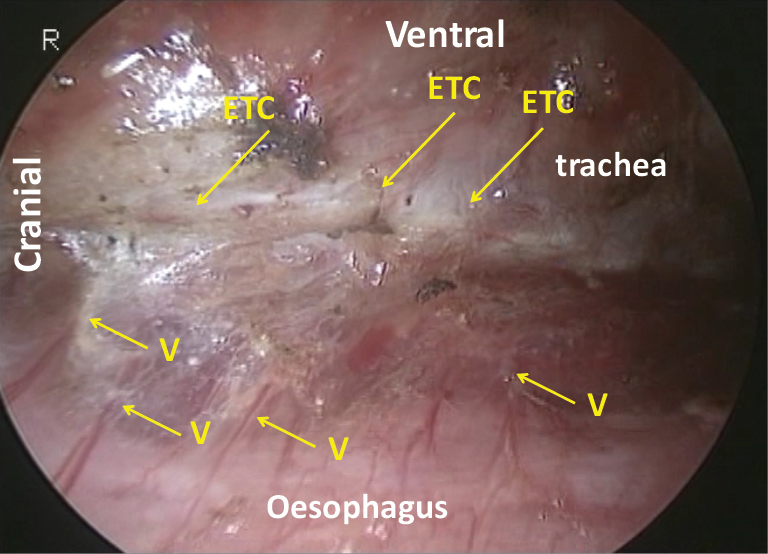 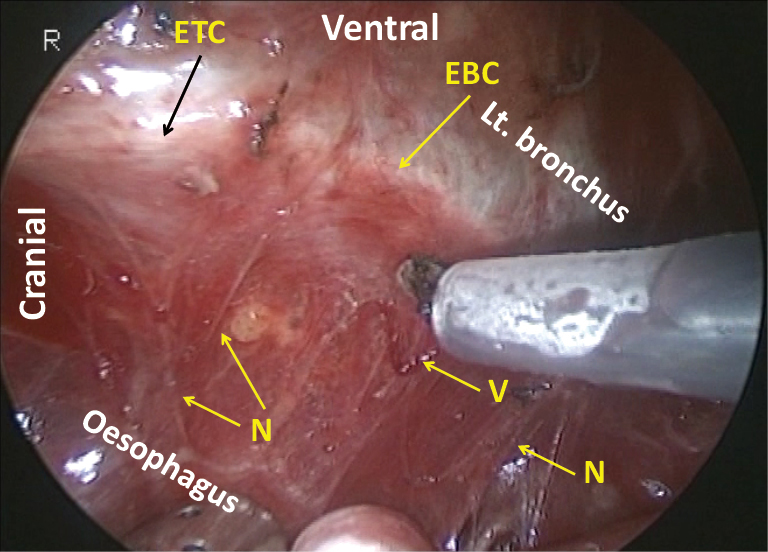 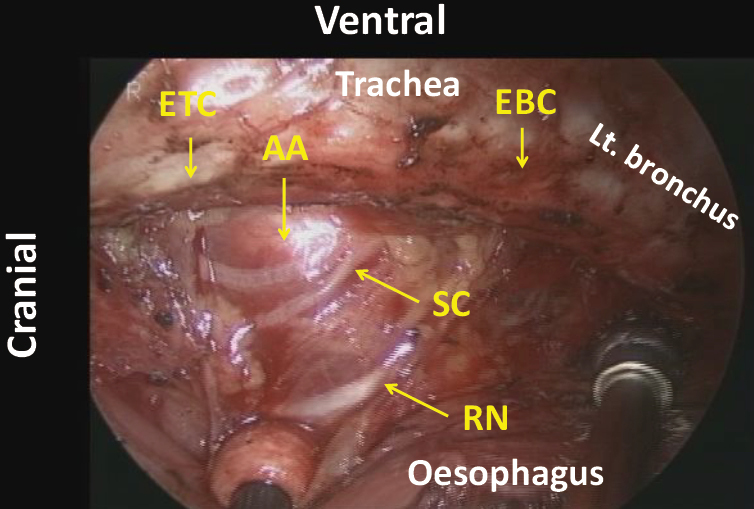 Figure 20 Exposure of cardiac branch of sympathetic nerve from the cervical ganglion. ETC, edge of the tracheal cartilage; EBC, edge of the bronchial cartilage; AA, right wall of the aortic arch; RN, left recurrent verve; SC, sympathetic cardiac nerve from the cervical ganglion (this nerve presents in front of the recurrent nerve and is covered with the fine fibrous membrane. There are no vessels penetrating this membrane). 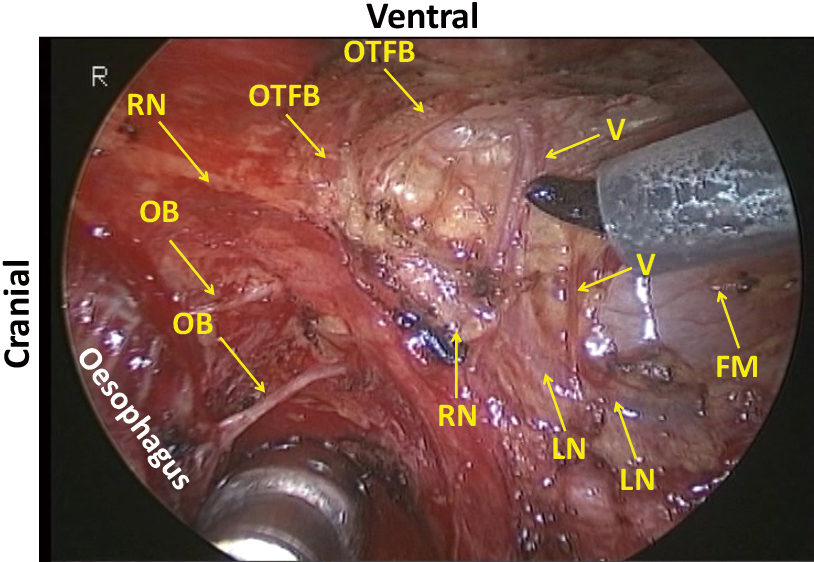 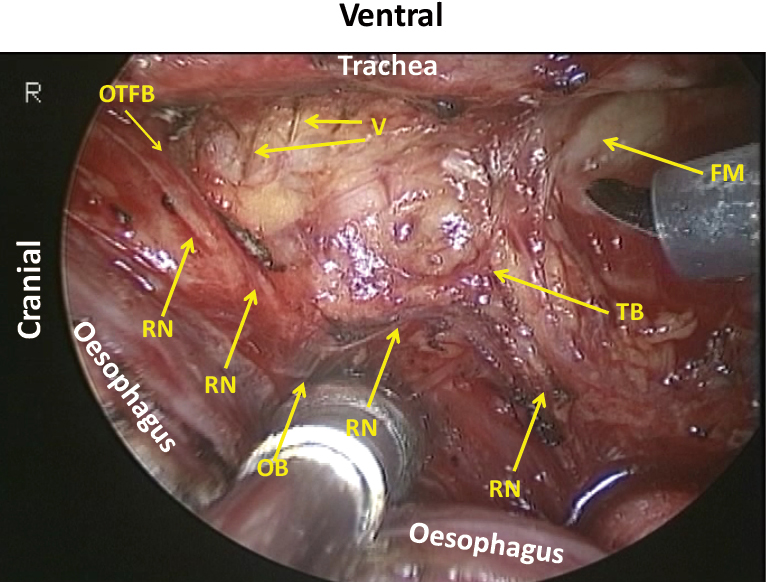 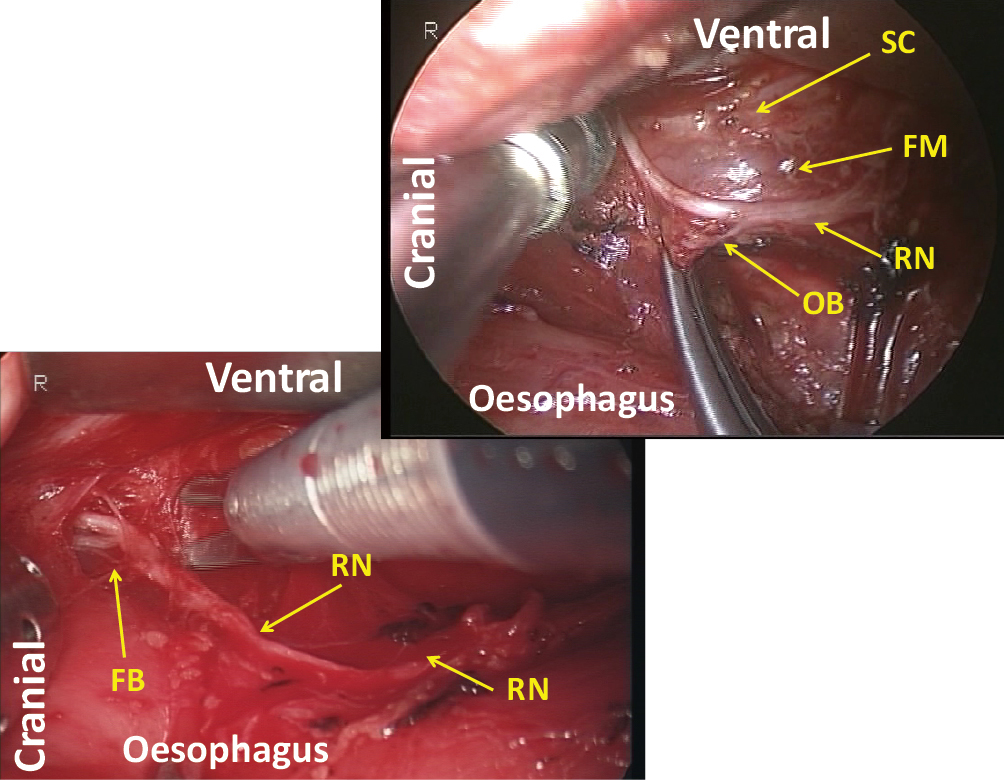 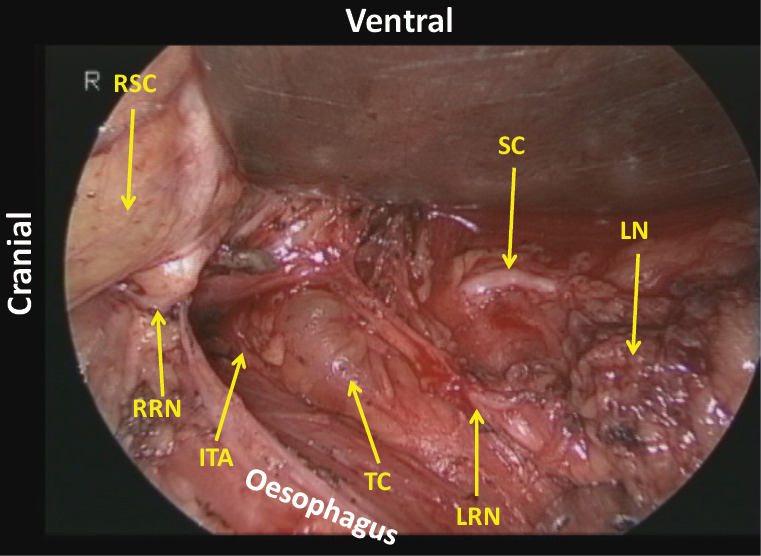 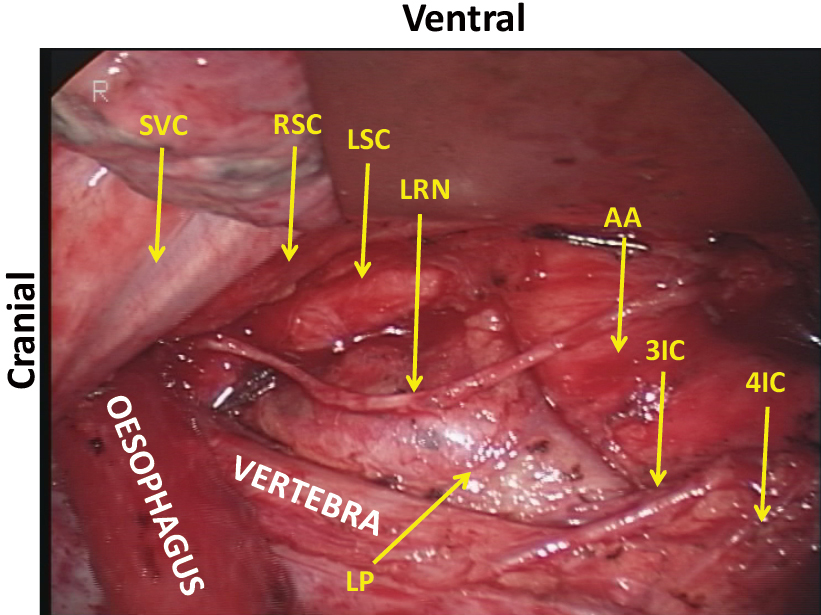 Recent population-based analyses revealed that slightly more than 30% of cases of oesophagectomy for cancer are performed thoracoscopically and the percentage is increasing (5-7). However, there is insufficient high-level evidence justifying the thoracoscopic approach. Only one prospective randomized controlled trial (8) and five meta-analyses (9-13) evaluating the benefits of thoracoscopy over open surgery have been reported. A British study demonstrated that there was no significant difference in outcomes between the minimally invasive group and the open surgery group, except for the former having a significantly higher risk of reintervention with increasing odds ratio with every progressive study year (5). Another study from Japan revealed that, compared with open surgery, minimally invasive oesophagectomy was associated with a higher incidence of overall morbidities (40.8% vs. 44.3%), anastomotic leakage (12.5% vs. 14.9%), and reintervention (5.6% vs. 8.0%) (6). Thoracoscopic oesophagectomies done by surgeons in the learning phase which are inevitably included in population-based analyses might be the cause of variance with the other studies. The operative and in-hospital mortality after oesophagectomy is conversely related with hospital volume (14) and the same result is seen after thoracoscopic oesophagectomy. The outcome of oesophagectomy strongly depends on the surgeon’s experience. When it is performed thoracoscopically, additional experience and skill are required of surgeons (15).

No oncologic adverse effects were detected in meta-analyses (9-13). The thoracoscopic approach did not negatively affect the quality of mediastinal dissection, retrieval of mediastinal nodes, or survival. In our experience, survival after thoracoscopic oesophagectomy was 92%, 88%, 69%, 52% and 27% at 5 years for pStage 0, 1, 2, 3, and 4, respectively (Figure 26). The indication was the same as that for open surgery and perioperative treatment consisted of neoadjuvant and/or adjuvant chemotherapy. Although the data are retrospective, survival was favorable compared with that after open oesophagectomy and similar to that for gastric cancer. However, the evidence of oncologic superiority of thoracoscopy over open surgery is still being evaluated with pragmatic randomized controlled trials. 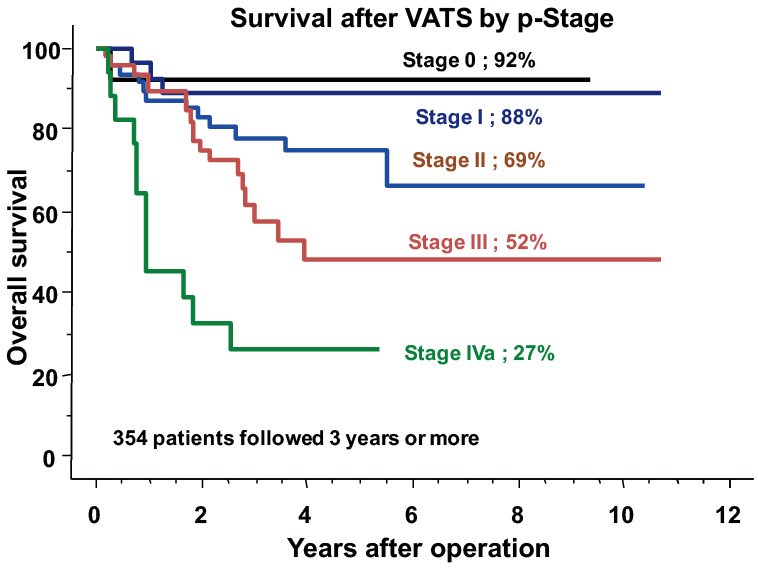 Figure 26 Survival after thoracoscopic oesophagectomy by p-Stage in patients followed for 3 years or more.

The quality of dissection has improved with increased understanding of the mediastinal anatomy in vivo under magnified view. The novel anatomical knowledge enhanced through thoracoscopy can serve as feedback for open surgery to improve the quality of mediastinal dissection. In this chapter, the microanatomy usually recognized in the treatment of non radiated patients is presented. It is supposed that in patients undergoing neoadjuvant treatment, especially radiation, the fine anatomy may become obscure because of mediastinal fibrosis. Even so, understanding of the innate microanatomy is essential to ultimately perform the ideal oesophagectomy, even in patients after neoadjuvant therapy.