Indication for VATS sublobar resections in early lung cancer
Video 1. Prompt identification and excision of a peripheral pulmonary nodule at the base of the left lower lobe.
Video 2. Division of pulmonary artery, vein and segmental bronchus during anatomical left apical upper tri-segmentectomy.

At present, surgery remains the most used radical treatment for early stage non-small cell lung cancer (NSCLC) (1). Lobectomy has been traditionally considered the gold standard procedure for early NSCLC following the Lung Cancer Study Group (LCSG) randomized controlled trial (2). However, the attempt to increase resection rates led to the need to offer surgery to patients with higher surgical risks: the elderly, the breathless and the ones with multiple co-morbidities (3-5). To manage these potential surgical risks and the possible long-term impairment in quality of life and respiratory function, surgeons have applied sublobar techniques to the management of lung cancer. These can be divided very clearly into two groups: non-anatomical resections (wedge) and anatomical resections (segmentectomies). The difference is the attempt during segmentectomies to follow the oncological principles of a lobectomy by achieving anatomical division of segmental veins, arteries and bronchi as well as good parenchymal clearance.

Video Assisted Thoracic Surgery (VATS) is on the increase in the management of benign and malignant processes. Large experiences have convinced the surgical community not only of the safety and possibilities of VATS surgery in early lung cancer, but of the benefits when compared to open surgery in terms of postoperative pain, length of recovery, return to activities, immune response to surgery and oncological results (6-9). As with open surgery where there is a variety of surgical approaches described (posterolateral, anterior, muscle-sparing, hybrid thoracotomies), VATS can also be performed with different surgical accesses: posterior approach, anterior approach, 2-port approach and single-port access (10-13).

We aimed to explore the potential possibilities and current experiences of the combination of sublobar resections and VATS techniques for early NSCLC.

Wedge resections involve the excision of a pulmonary lesion with clear parenchymal margins with no attempt to deal with the hilar lobar structures (arteries, veins or bronchi). Although traditionally has been considered as a compromise operation due to the results of the LCSG trial that reported increase local recurrence compared to lobectomy, the indications for wedge excisions may be on the increase (2). Invariably, it is necessary that the lesion is peripheral so it can be identified and “wedged out” safely with sufficient margins. Despite the theoretical limitations as a sound oncologic procedure, wedge resection has continuously been used in certain circumstances for patients with lung cancer (14,15).

Wedge resections can be performed via VATS using a number of incisions including the single-port approach (16). Ideally the lung should be collapsed as it facilitates location of pulmonary nodules and instrumentation, but it can potentially be performed in a ventilated lung in patients that can’t tolerate single lung ventilation. There are different ways to identify the lesions including palpation with instruments or the tip of the finger, but also more complex techniques using technology such as placement of metal wires/coils (17,18), instillation of different contrasts (19-21) or use of intraoperative ultrasound techniques (22).

Once the nodule has been identified, surgical staplers are applied to excise and seal the pulmonary parenchyma with clear margins. A brief example of a diagnostic excision of a nodule in the left lower lobe via a single port incision is demonstrated in Video 1 with the position of the incision and instruments is illustrated in Figure 1. 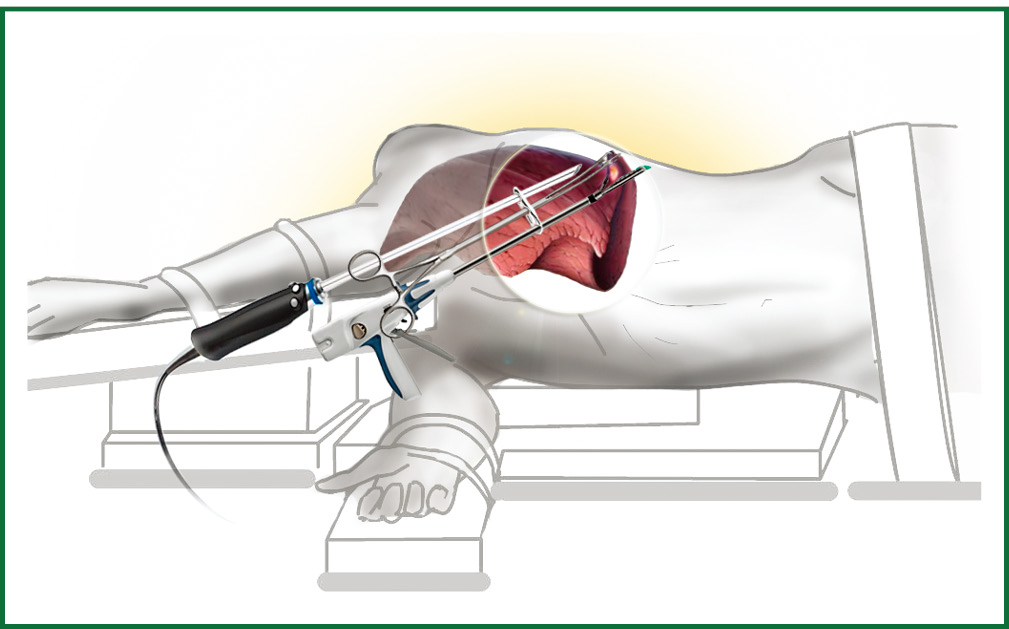 Figure 1. Diagram showing the position of the optics and instruments during VATS wedge excision of a pulmonary nodule.

There is very limited evidence available to assess the role of wedge resections in lung cancer. One randomized controlled trial by the LCSG reported a similar survival, but increased recurrence of cancer in patients undergoing sublobar compared to lobar resections (2). The surgical community accepted the results and acknowledged the effort of the trialists and, even accepting the trial limitations, considered lobectomy as the procedure of choice for early lung cancer thus reserving sublobar resections for specific cohorts of patients who might benefit of the preservation of the parenchyma or a quicker procedure.

The experiences reported in the use of VATS wedge resections when compared to lobectomy are consistent with traditional reports in the thoracotomy approach. Wolf et al reported a retrospective comparative series of 154 sublobar resections (43% via VATS) and 84 lobectomies (10% via VATS) performed in patients with small early lung cancer. Patients who underwent lobectomy had a better survival and disease-free survival, but the sublobar group was significantly older and with worse respiratory reserve, highlighting the selection bias in this and every other study of its kind (23). Landreneau et al. reached similar conclusions in a multicenter study evaluating 102 wedge resections (60% by VATS) when compared to lobectomies (24).

One of the potential limitations of the use of VATS in deep-sited small lesions is the difficulty to locate them during surgery. The use of technologies has helped the identification of these nodules. Lee et al. were successful in 101 of 103 cases with small pulmonary nodules with the wire location techniques with an average operative time of 11 minutes (16). Molins et al. reported 50 out of 52 patients successfully underwent VATS excision of small nodules also identified by wires in the ambulatory setting (18). Similar success rates are reported by surgeons using different markers (methylene blue, radionuclides or contrast) (19-21). Finally, the use of intraoperative ultrasound has been reported by VATS, even in the single-port approach (25). Whatever the technology available, all these techniques seem to aid in identification of deep or small nodules during VATS surgery.

Based on the limited available evidence and the reported use of wedge resections in certain cohorts of patients with lung cancer we can identify possible indications for sublobar wedge resection in early NSCLC:

Segmentectomies consist in the anatomical excision of one or more pulmonary segments. It is required to divide segmental branches of pulmonary artery, vein and bronchi related to the excised segments. The traditional technique of finding the segmental parenchymal plane by hand or electrocautery has now been substituted in many cases by the use of surgical staplers placed beyond the intersegmental plane with the potential benefit of reducing air leaks and parenchymal bleeding (26-28).

Segmentectomies for early lung cancer have been reported in the literature, and appear to be used more frequently (29,30). Surgeons have identified the potential role as an alternative to lobectomy in situations to increase operability (the elderly, patients with poor respiratory reserve, previous pulmonary resection) and resectability (multifocal ground-glass opacities, synchronous tumors, history of other solid malignancies where diagnosis of metastasis is a possibility), but also as the preferred option in small early stage NSCLC (31,32).

There is a limited but growing experience in the use of VATS segmentectomies, championed by experienced thoracoscopic surgeons but progressively being adopted by more units (33,34). The procedures can be performed via all the different VATS approaches including the Uniportal one (Video 2) and the instruments position is shown in Figure 2.

With the patient on the lateral decubitus and forced hyperextension of the chest cavity to increase the intercostal space, a 4 cm incision is performed anterior to the latissimus dorsi edge at the level of 4th-5th intercostal space. The 30-degree thoracoscope is inserted to explore the pleural cavity. The thoracoscope is kept at the most posterior end of the wound allowing the insertion of 2, 3 or even more thoracoscopic instruments without interfering with them. Initially adhesions are divided with electrocautery and the left apical upper trisegmentectomy is performed. The Pulmonary Artery is identified and the initial branches are isolated and divided with an endo stapler. The segmental veins with preservation of the branches draining the lingula are then isolated and divided. Slightly more difficult is the identification of the segmental bronchus. Once this is isolated, we recommend that an inflation test is carried out prior to bronchial division as errors have been reported in VATS procedures. Once the bronchus has been divided, the parenchymal plane is identified by the inflation method prior to the excision. The specimen is removed with the help of a specimen bag in order to facilitate extraction and to minimize theoretical risk of wound seeding.  A single intercostal drain is inserted after division of the inferior pulmonary ligament, lymph node excision and satisfactory lung re-expansion. Surgeons have employed other methods to identify the segmental plane: indocyanine green instillation or isolated inflation of the segments to be resected, all of them valid.

The only randomized controlled trial including anatomical segmentectomies for lung cancer is the LCSG that, unfortunately, grouped segmentectomies together with wedge excisions. It concluded that survival after sublobar resections was equivalent to lobectomy but recurrence rates were much higher making a strong case for lobectomy to be considered the procedure of choice in early lung cancer. Unfortunately, the conclusions were impossible to extrapolate into a whole segmentectomy cohort due to the trial design (2).

Following this, few case-matched reports and several comparative series have indicated the value of anatomical segmentectomies to be similar to lobectomies in small size lung cancers, not only in the high-risk but also in the overall population (35-37). While survival or recurrence rates appear to be similar, there is evidence to demonstrate the lesser impact on pulmonary function after segmental resections.

If we apply the potential advantages seen in large experiences of surgeons performing VATS lobectomies compared with open lobectomies (less pain, early recovery, less complications and reduce immune response) the prospect of VATS anatomical segmentectomies might be very appealing (6-9). Several authors have described their experiences with a variety of VATS approaches from 4 to Single-port, and there are some comparative series between VATS and Open segmentectomy for lung cancer (38).

Overall, authors have not seen any significant differences in perioperative outcomes, survival or rates of recurrence between VATS segmentectomy and VATS lobectomy (Table 1) (39-43). The loco-regional recurrence rates vary between 2.8% and 7.7% in the different reports, similar to after VATS lobectomy by the same surgeons. One manuscript by Atkins et al compared the outcomes between open and VATS segmentectomies performed in an experienced thoracoscopic unit, with perioperative results indicating that VATS techniques do not compromise outcomes (38).

Authors have not seen a significant reduction in the patients’ hospital stay after VATS segmentectomy compared to VATS lobectomy, maybe as a consequence of longer lasting air leaks after segmentectomy due to the more extensive parenchymal trauma than after a fisureless VATS lobectomy (39-43). In the VATS experience we are yet to confirm the benefits on pulmonary function that segmentectomy seems to have over lobectomy in thoracotomy cohorts (44).

Based on the limited available evidence, and pending the results of modern studies underway (CALBG-140503 trial of segmentectomy vs. lobectomy for early lung cancer), the possible indications for VATS sublobar resections in NSCLC include: