The American College of Chest physicians and the British Society of Thoracic Surgeons have published guidelines for the management of primary spontaneous pneumothorax (PSP) (1,2). Both reports stated that, after the first recurrence, PSP should be treated surgically, performing a thoracoscopic bullectomy associated with a procedure for inducing pleural adhesions.

A joint document from the American Thoracic Society and European Respiratory Society (3) recommends the use of surgical lung biopsy for obtaining an accurate diagnosis in patients affected by interstitial lung disease (ILD). The choice of performing this procedure, however, should take in to consideration a considered judgment of the surgical risk and general anesthesia. In this perspective, the minimally invasive approach should be preferred.

In 2004, Rocco and Colleagues published their first paper about the use of the uniportal video-assisted thoracic surgery (VATS) (4) as a novel mini-invasive surgical technique designed to perform pulmonary resections in patients affected by PSP or ILD. The authors described the theoretic aspects of this surgical approach and their results on an initial cohort of 15 patients. Since then, the uniportal VATS has been applied for treating several intra-thoracic diseases and its short and long term results have been reported, confirming the advantages in comparison with traditional techniques (5).

This paper presents the principal steps to follow in order to perform a uniportal VATS pulmonary resection, and reviews its role in managing PSP or ILD patients.

The uniportal VATS approach is a minimally invasive technique, which allows to perform intrathoracic surgical procedures through a single incision (2-2.5 cm long). The patient is usually positioned in lateral decubitus and the unique port represents the inlet for the optical source as well as for all the other operative instruments (4,6) (Figure 1 freezed image of the patient in OR). Usually no devices are used to dress the incision and generally the trocar used to insert the videocamera is retracted along the stem, in order to maximize the movement of the instruments. 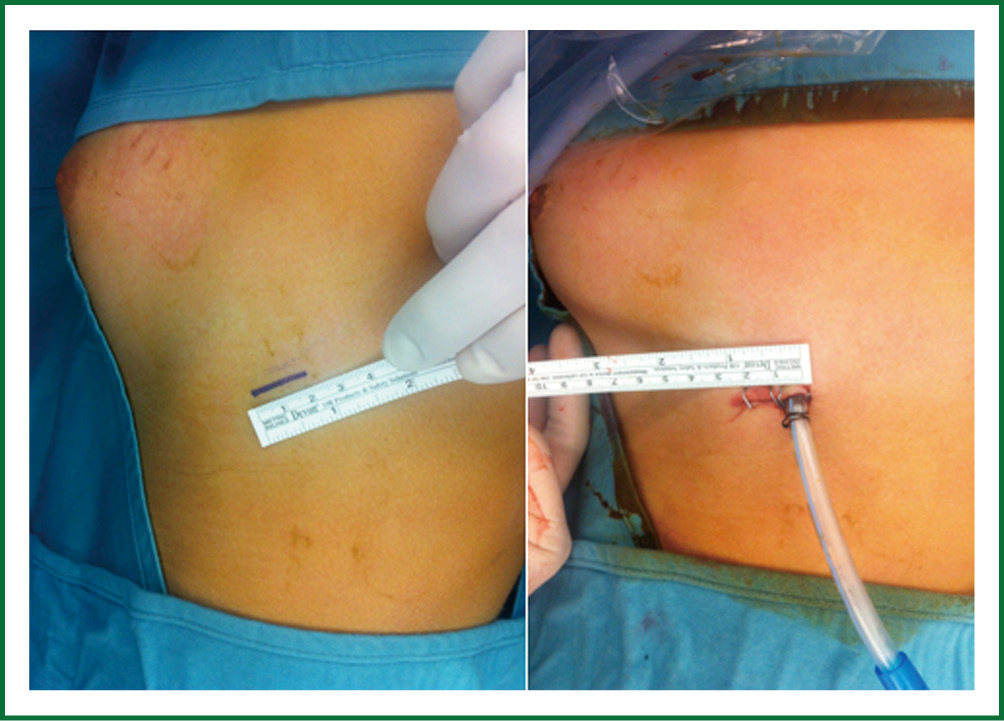 Figure 1. Uniportal access before the skin incision and at the end of the surgical procedure.

The position of the incision could vary depending upon the procedure and the site of the target lesion, even though most of the operations can be performed using an access lying at the level of the fifth intercostal space on the mid axillary line (5).

Differently from the standard three-port VATS approach, where the lesion represents the apex of an ideal pyramid and the camera and instruments are positioned in correspondence of the other three vertexes, the uniportal VATS technique implies that the lesion, the camera and the instruments all lie in the same sagittal plane. The single incision is the fulcrum from which the parallel instruments reach the target, arranging themselves in a cranio-caudal direction (4,6).

optical source allows to increasing their mutual mobility, facilitating the execution of the planned procedure.

The surgical approach is considered the best treatment to minimize the risk of recurrence in patients, who experienced a PSP (1,2). There is a solid evidence in the literature demonstrating that the minimally invasive approach should be preferred to the open procedure since it is able to reduce the postoperative pain and it is associated with a faster recover of the physical and working activity (2). The uniportal VATS technique allows to performing all the main surgical steps recommended for treating patients affected by PSP, amplifying the clinical advantages of the traditional three-port VATS (7).

In fact, as shown in the Video 1, using this surgical technique it is possible:

At the end of the procedure a chest tube can be positioned using the single thoracic access.

Compared to the traditional three-port technique, the uniportal VATS offers clinical and management advantages. Rocco and colleagues (7) retrospectively compared a group of 16 patients submitted to uniportal VATS with 19 patients treated by three-port VATS. They found that the use of a single access resulted in a lower early postoperative pain score measured by a visual analogic score ranging from 0 to 4 (mean postop pain: uniportal 0.4±0.5 vs. three-portal 0.8±0.7 P=0.06, maximum postop pain: uniportal 1.4±0.9 vs. three-portal 2.6±0.9 P<0.001). Moreover, at the telephonic interview follow-up (mean follow-up time: uniport 9.4±6.6 months, three-port 32.1±9.9 months), they found a reduction of long term neurologic symptoms (uniport 14% of pts, three-port 58% of pts).

All these three papers found that the uniportal VATS did not increase the operation time nor the incidence of PSP recurrences compared to three-port VATS.

The correct diagnostic definition represents the starting point to set an effective therapeutic protocol for patients affected by ILD. Even if, in some cases, the specific diagnosis can be established on the basis of clinical, laboratory, radiological and cytological examinations, it is often necessary to perform a surgical biopsy in order to obtain an adequate sample of lung tissue for the histopathological analysis. This surgical procedure should be proposed, taking into account the associated risks in a kind of patients already suffering for compromised respiratory function.

The most recent guidelines (3,10) recommend to taking at least two samples of lung tissue from two different lobes in order to optimize the diagnostic accuracy. At the same time it is suggested to perform the procedure using a minimally invasive approach in order to minimize the surgical risks.

As also emphasized by this article, it is evident that the uniportal approach is a viable option to reduce even more the impact of the surgical procedure compared with the traditional three-portal VATS, maintaining the required characteristics for an effective lung biopsy procedure.

In fact, in 2005 Rocco and Colleagues reported their experience about 20 patients submitted between January 2000 and April 2004 to uniportal VATS wedge resection of the lung for diagnosis of ILD (12). They demonstrated that using this technique was possible to obtain a median of two specimens for each patient without mortality nor major morbidity. All patients received a correct diagnosis, which altered the treatment protocols in 70% of them.

The following video (Video 2) shows how the use of the uniportal approach makes possible:

We have described the theoretical and practical aspects of the uniportal VATS technique for managing PSP and ILD. Our experience and the available data from the literature demonstrates that uniportal VATS is a well defined and standardized surgical technique which may be used to perform several intra-thoracic operation and, in particular, an effective approach for treating PSP and for achieving diagnosis in patients affected by ILD.