Anatomic segmentectomy was first described in 1939 for the treatment of benign lung conditions (1). The usual indications also include metastatic disease to the lung when ta parenchyma-sparing procedure is anticipated Nevertheless, anatomic pulmonary segmentectomy has been demonstrated to be effective in the resection of small primary lung cancers (2,3). Recently there has been a renewed interest in the use of anatomic segmentectomy, especially for patients unable to tolerate lobectomy because of poor cardiopulmonary function or severe comorbidities. Several recently published studies have shown that segmentectomy can be performed safely without compromising oncologic results (3-6).

The size of the utility incision is comparable to those commonly used for double-or triple-port approaches (8) and it is usually smaller than for a lobectomy, about 3-cm long. The incision is usually placed at the level of the 5th intercostal space (Figure 1) to get good access to upper hilar structures and lymph node stations. Adequate exposure of the lung is mandatory for successfully completion of the segmentectomy. The surgeon and the assistant must be positioned in front of the patient in order to have the some thoracoscopic vision during all these steps of the procedure and be more coordinated with the movements (Figure 2). Instruments must preferably be long and curved to allow the insertion of 3-4 instruments simultaneously (Figure 3). Optimal exposure of the lung is key to facilitate the dissection of the segmental structures and to avoid instrument interference. The HD 30° thoracoscope (the videolaparoscope with the distally mounted CCD design helps the instrumentation) is usually inserted in the posterior part of the incision and the instruments are placed below the camera. Bimanual instrumentation is crucial to achieve a successful segmental resection through a single incision VATS (Video 1). A single chest tube is inserted through the same incision at the end of the procedure (Figure 4). 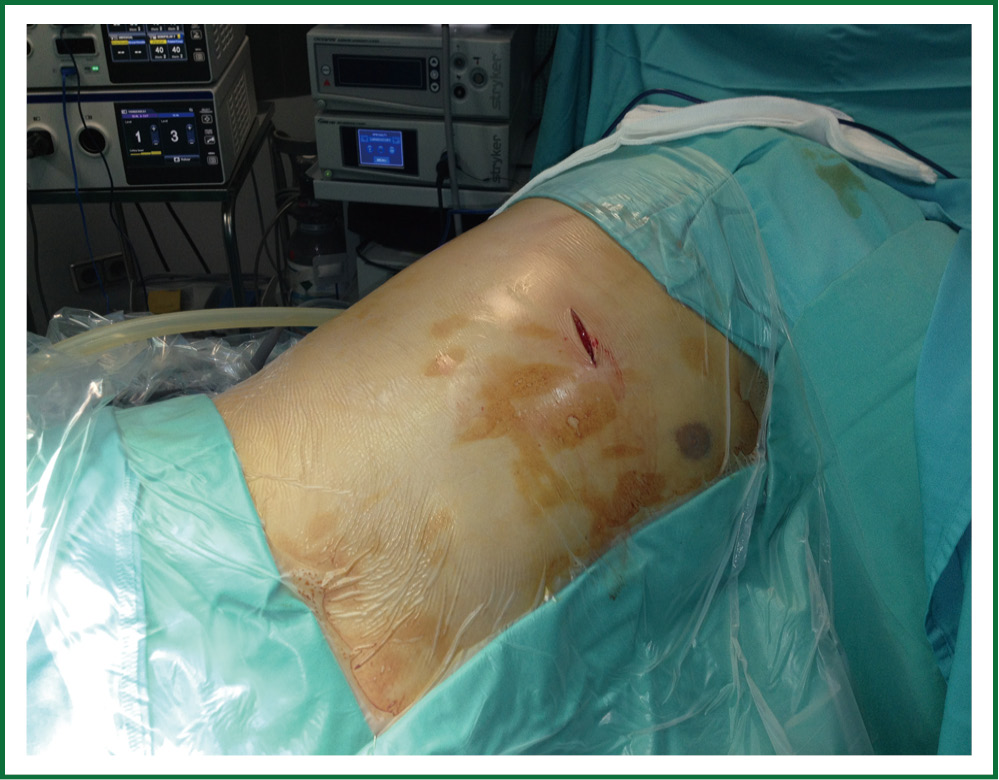 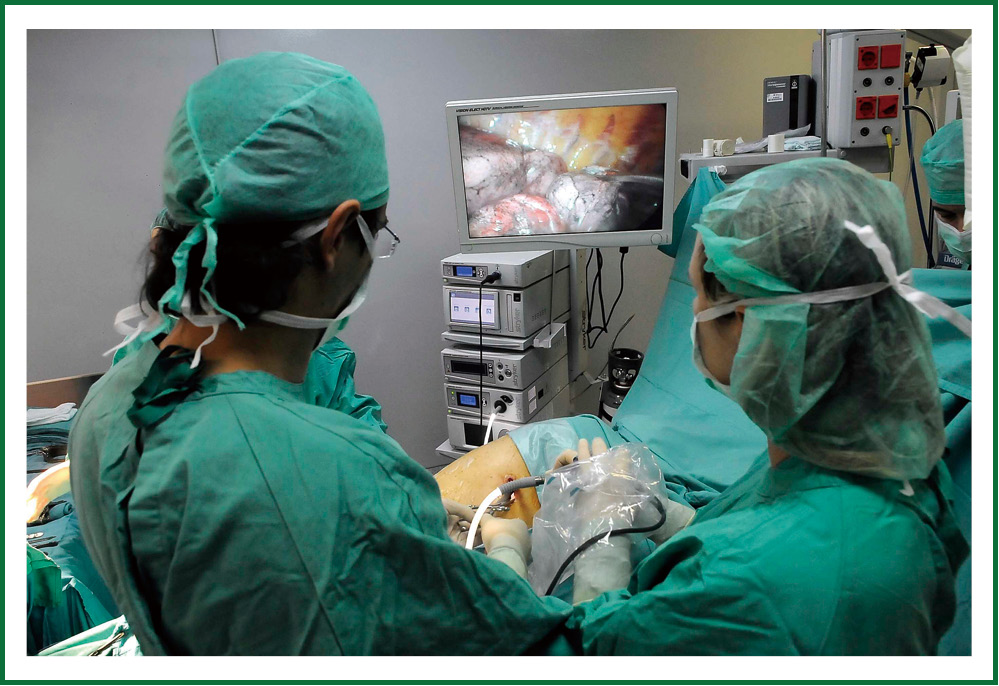 Figure 2. Surgeons positioned in front of the patient watching the same monitor. The scrub nurse is located on the opposite side. 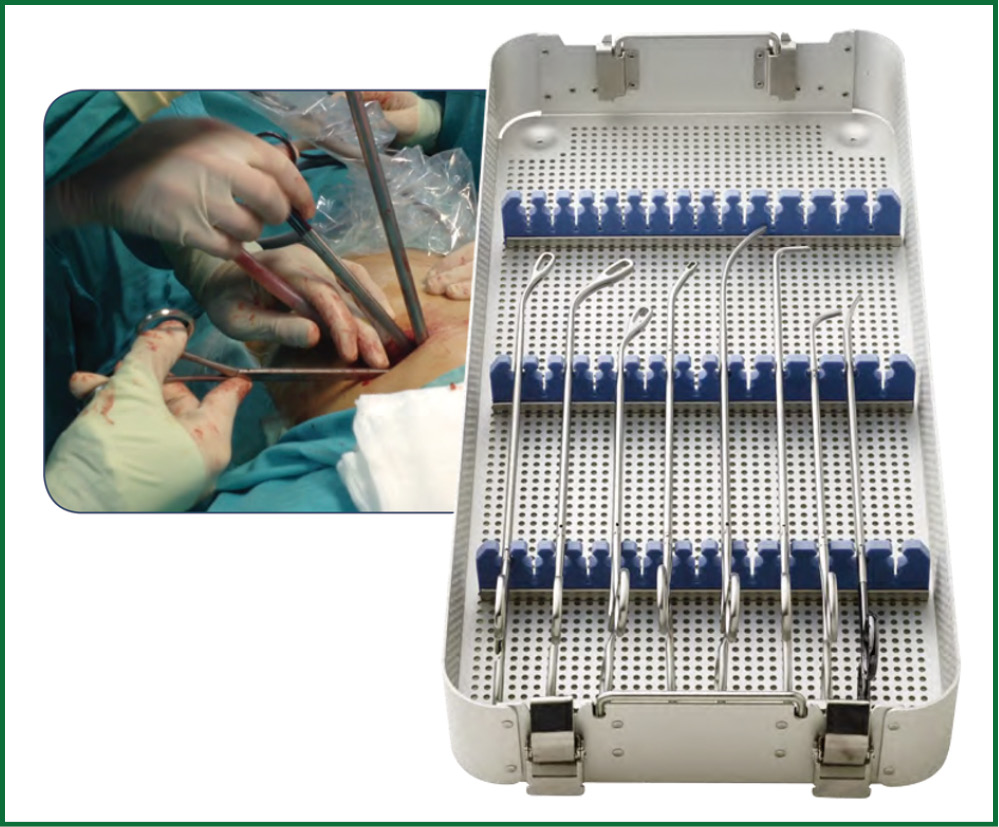 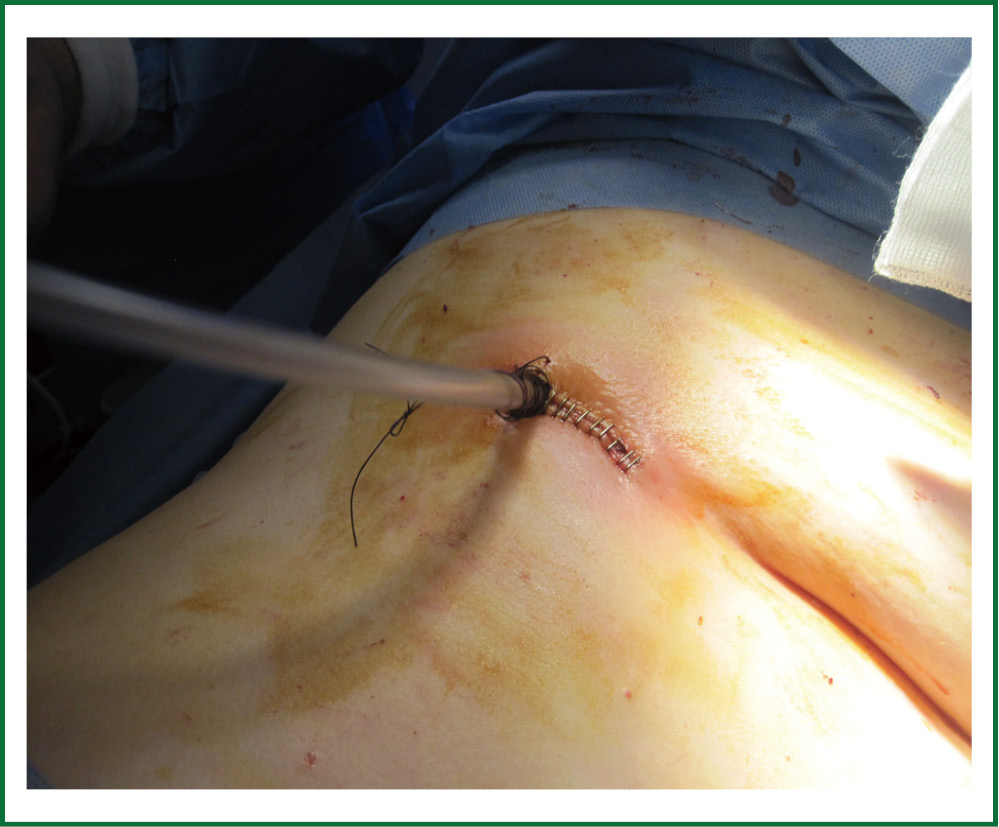 Figure 4. Single-chest tube placed in the posterior part of the incision.

Different types of segmentectomies can be performed according the segment to be resected:

The most frequent anatomic segmental resection is the superior lingulectomy and the superior segment of lower lobe (S6).

The lingula is retracted laterally and posteriorly and the pleura overlying lingular vein (LV) is incised. The identification of LV and lower lobe vein (LLV) indicates the location to place the stapler to divide the anterior portion of major fissure (the anvil of the stapler is placed between the LLV and LV, and we pull the parenchyma into the jaws of the stapler). This maneuver facilitates the dissection and insertion of stapler to transect the vein (Video 2). In some cases there is no angle for stapler insertion, then we use vascular clips, like click aV (Grena®) (Video 3). Other option is to tie off the LV (the short distance from the incision facilitates this maneuver). Once the vein is divided, the lingular bronchus is exposed, dissected and stapled. When there is no angle for stapler we can transect bronchus by using scissors and close the stump at the end of the procedure by using a stapler (Video 3). 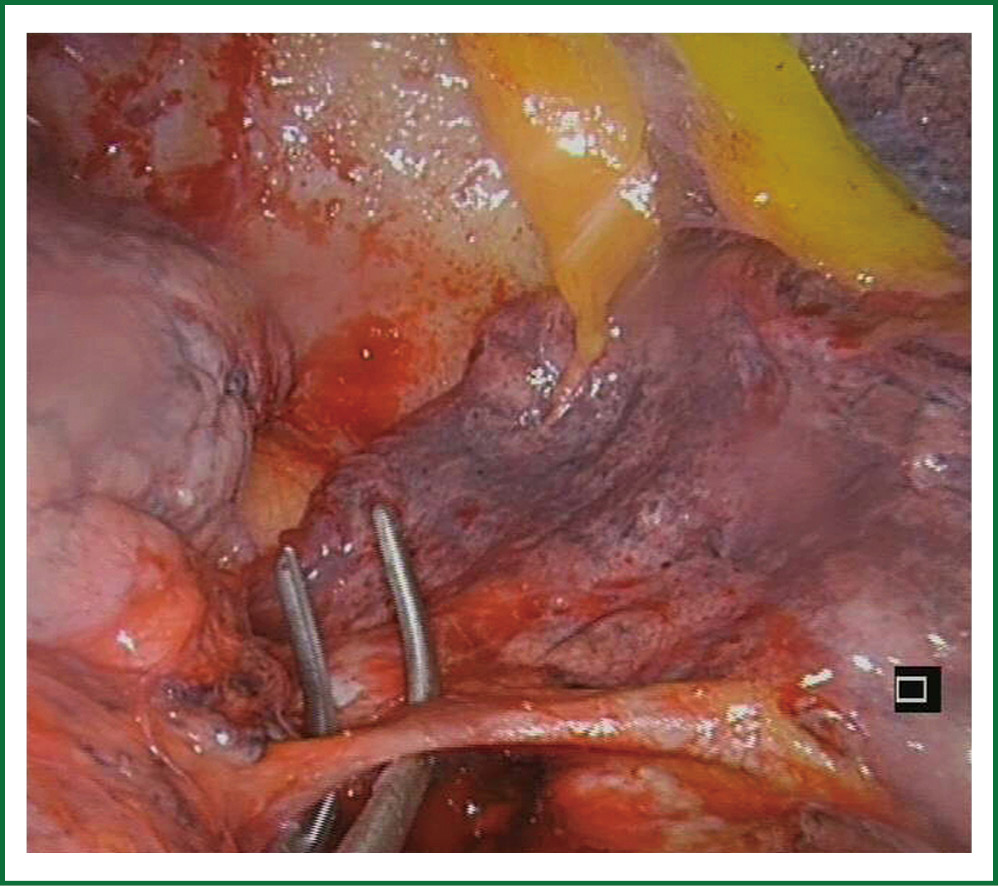 Figure 5. Dissection of lingular artery exposed in the fissure.

The anterior and apical arterial segmental branches are approached anteriorly, dissected and ligated by using stapler or vascular clips. The upper division of pulmonary vein is dissected and divided (anterior, apical and posterior veins) (Video 5). The posterior artery is usually visualized after vein division and is divided by using vascular clips (we can use clips for proximal control and energy sealant devices for distal division) (Figure 6). The trisegmental bronchus is easily visualized after ligation of the segmental vein and arteries. Care must be taken during this dissection to avoid injury of lingular artery. After the bronchus is stapled (Figure 7) and divided the parenchymal resection is then completed through the segmental plane by using staplers (Video 4). 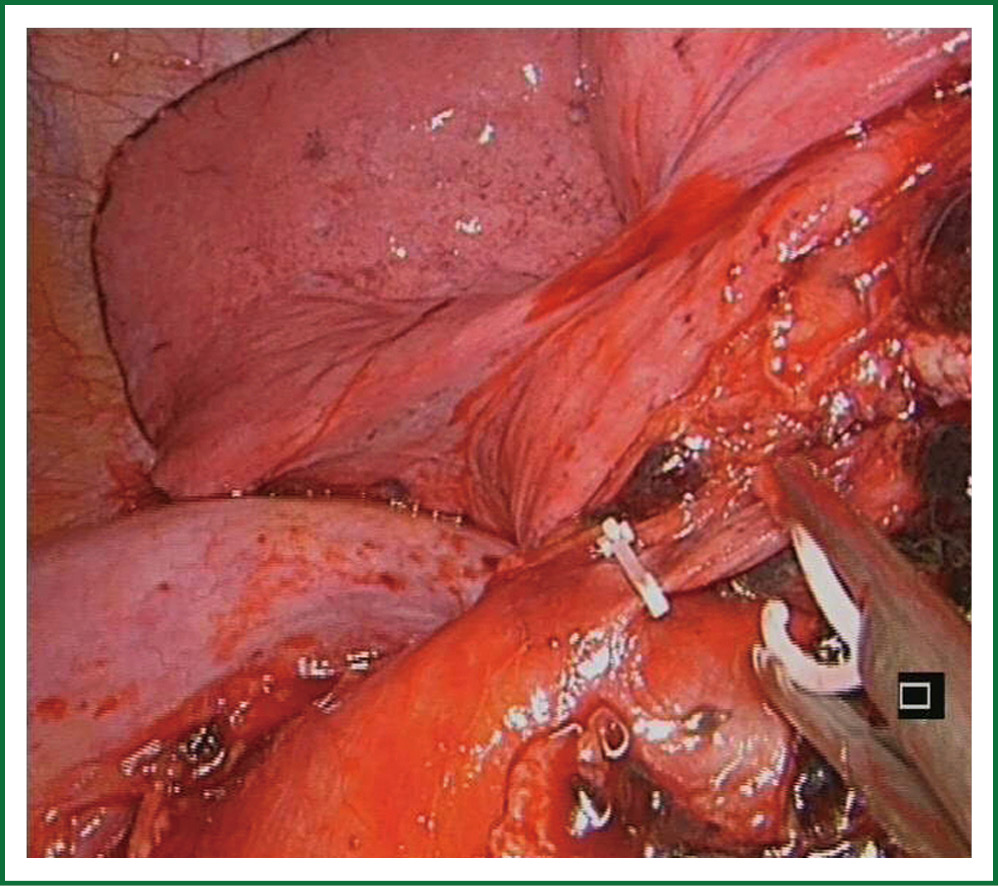 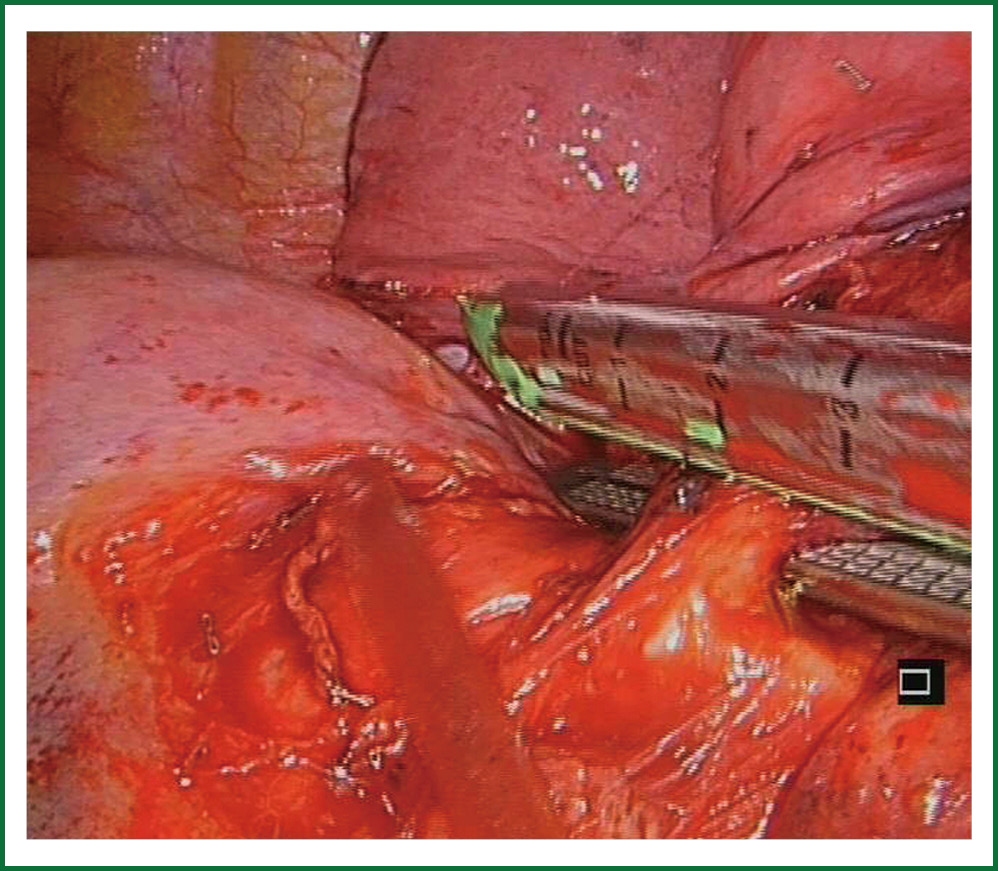 The resection of the superior segment (S6) of lower lobe is easy because of the constant anatomical landmarks. The segmentectomy is done differently depending whether the fissure is complete or not. If fissure is complete we try to expose the superior segment artery in the fissure. To staple the artery we use a vascular clip (click aV, Grena®) or an endostapler (Figure 8) (7). 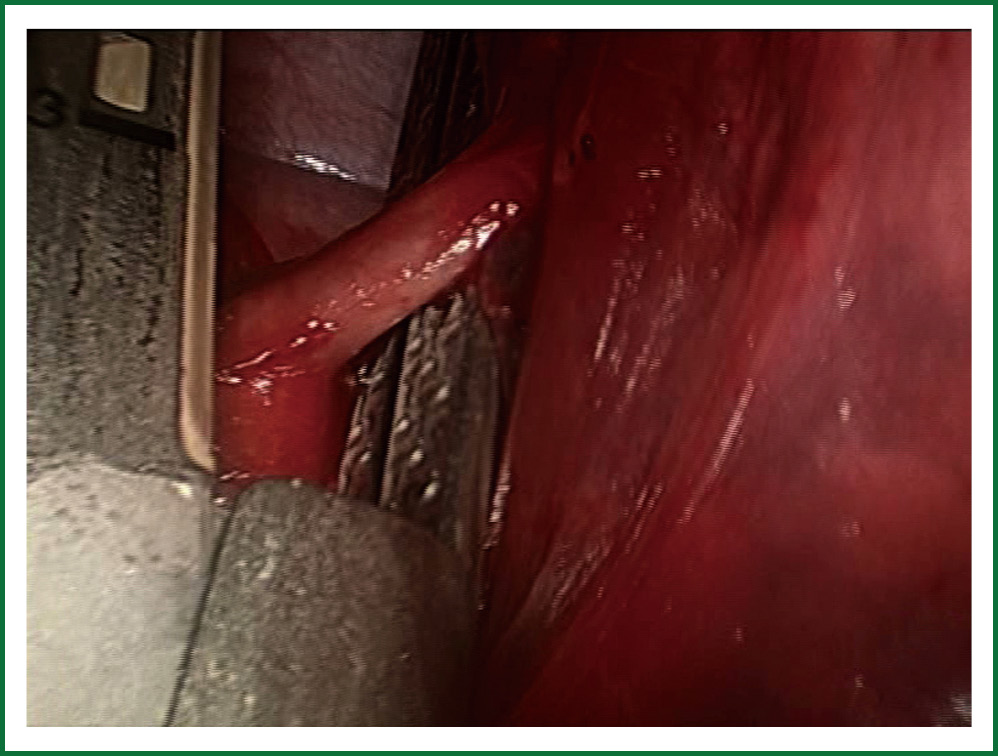 With a long ring forceps we retract the lower lobe and cut the pulmonary ligament to find the segmental vein (V6) for dissection and division by using a clip or a stapler. We dissect and expose the superior segmental bronchus and we staple it in the same way as mentioned for the vein (Figure 9). The last step is to divide the intersegmental plane (Figure 10) and remove the segment in to a protective bag (Video 6). 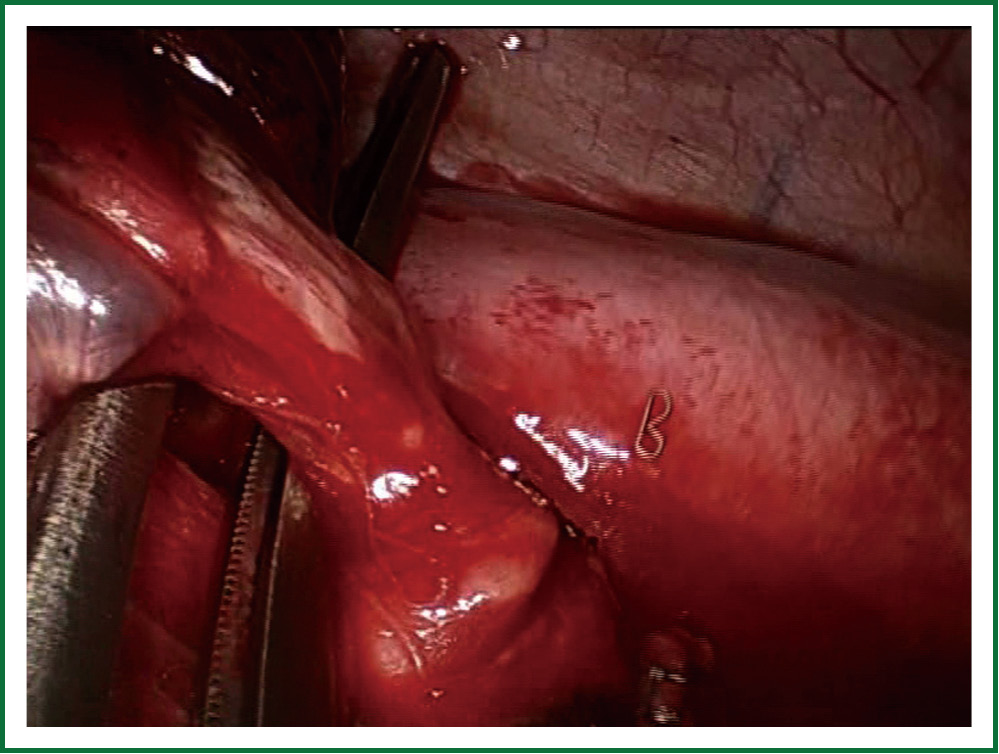 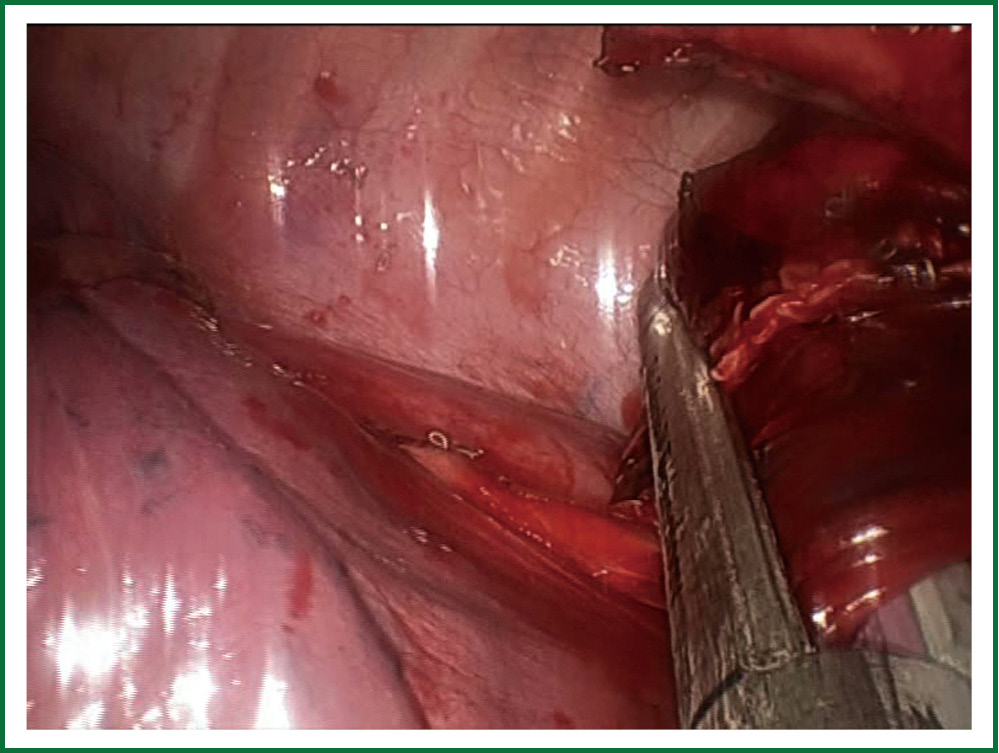 Regarding segmentectomies with incomplete fissure or with no visible artery the procedure must be different. The preferred method does not involve dissection within the fissure in order to minimize postoperative air leaks. The resection must be performed from bottom to top, leaving the fissure stapling as the last step (fissureless technique). After cranial retraction of the lobe, the sequence of the dissection should be: inferior pulmonary ligament; segmental vein; segmental bronchus, segmental artery and intersegmental plane. Once the segmental bronchus is stapled, the inflation of the lobe delimits the intersegmental plane. 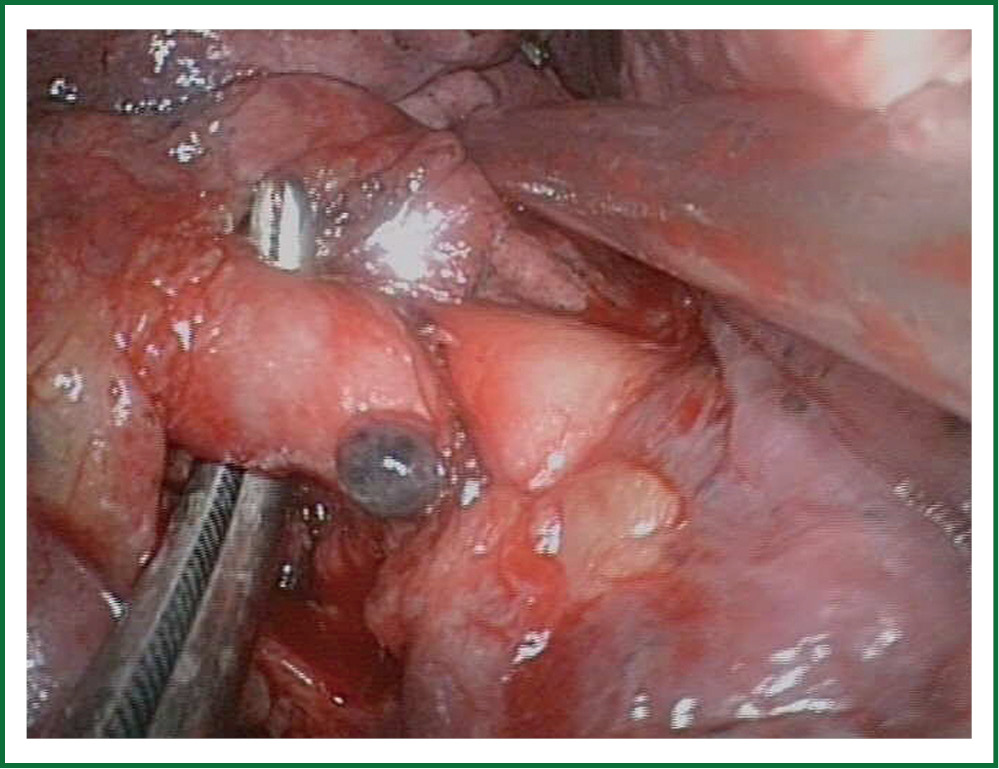 When performed stepwise in a caudo-cranial fashion, extra care must be taken to correctly identify the segmental structures. Once the inferior segmental vein has been divided, the lower lobe basilar segmental bronchus is exposed, dissected and divided from its inferior aspect to its bifurcation with the middle lobe bronchus on the right side or the upper lobe bronchus on the left side. Dissection of the bronchus with development of the plane between the bronchus and artery is performed with visualization of the artery. We recommend the removal of the interbronchial lymph nodes to better define the landmarks. The basilar segmental arterial branch to the lower lobe is identified (Figure 12) and divided and the intersegmental plane is stapled (Figure 13). 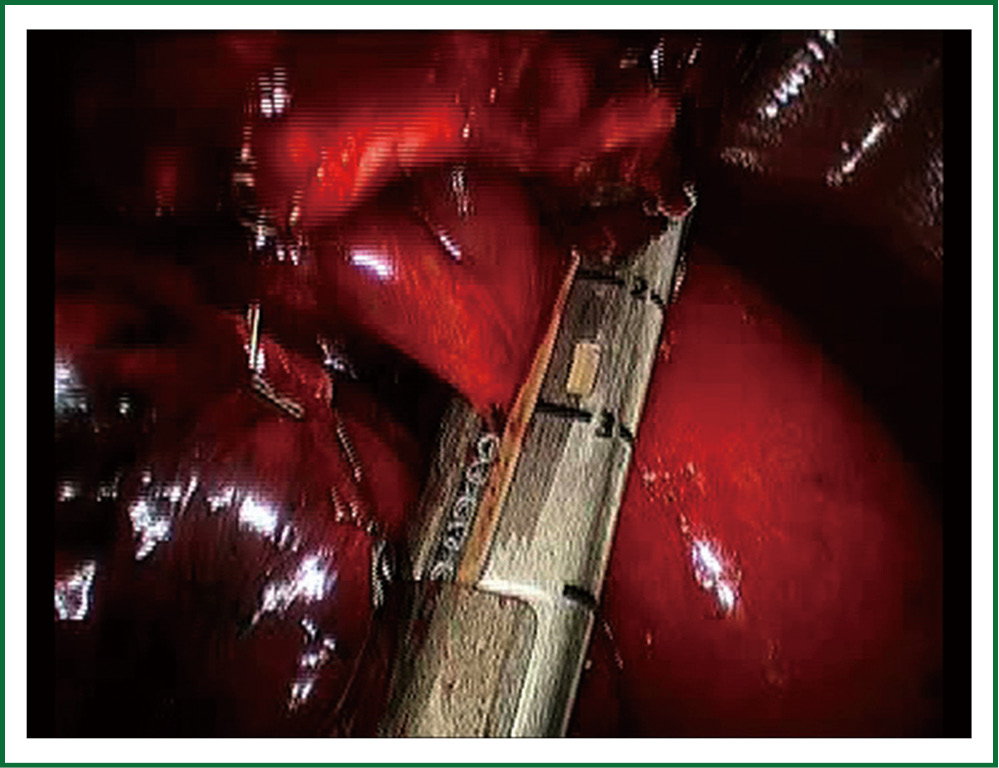 Figure 12. Division of basilar artery during left lower lobe basilar segmentectomy from down to up (fissureless technique). 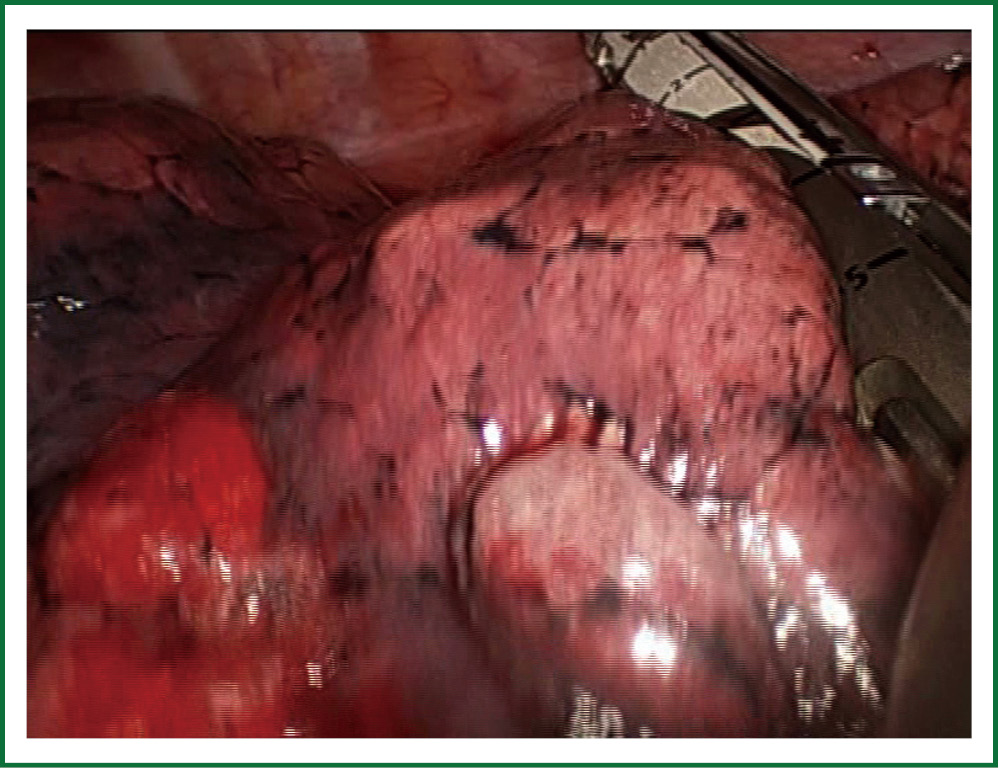 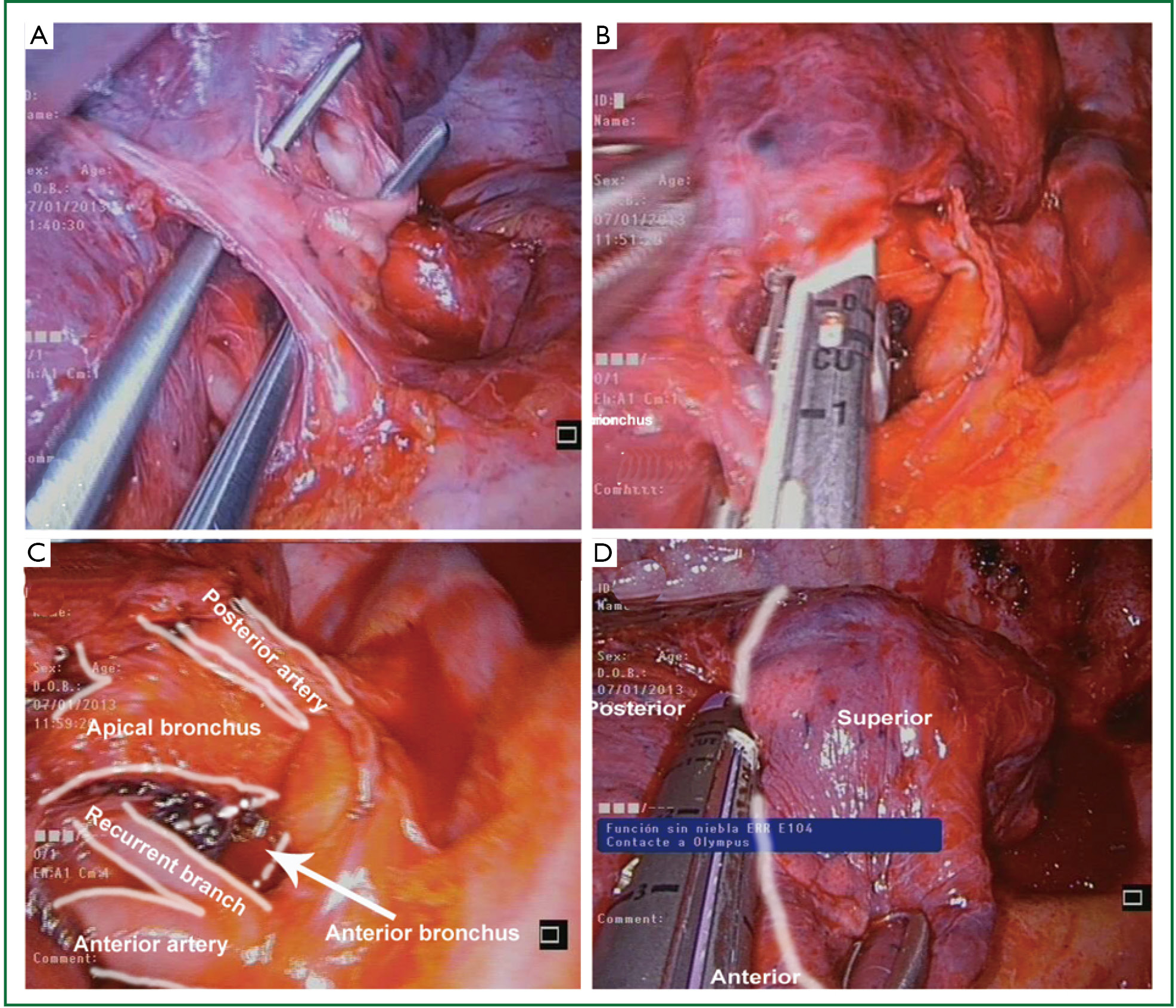 While the bronchial anatomy is very consistent, the arterial anatomy is variable. We always have to keep in mind that venous anatomy can drain multiple segments. It is very important to define the intersegmental plane. The ventilation of the lung delimitate the segmental plane once the segmental bronchus has been divided. To avoid collateral ventilation some authors have suggested following a reverse inflation-deflation technique, stapling the segmental bronchus once the whole lung is ventilated in order for the inflated segment to remain readily visible after deflation (6).

Uniportal VATS segmentectomies are usually more difficult than lobectomies. Most of reported segmentectomies are related to segments that can be easily excised, such as the lingular, superior, and basilar segments (1-3). In these segments the parenchyma can be separated by using staplers. To remove other segments via uniportal VATS, the procedure is more difficult but feasible. The preoperative evaluation of branches of pulmonary veins (8) or trans-bronchial indocyanine green injection and the use of infrared thoracoscope helps the intersegmental plane identification of complex segmentectomies (7). Since June 2010 we have performed 17 uniportal VATS anatomic segmentectomies. Lingulectomy for lung metastasis was the most frequent operation. The mean surgical time was 94.5±35 minutes (40-150 minutes). The mean number of nodal stations explored was 4.1±1 (range, 0-5) with a mean of 9.6±1.8 (range, 7-12) lymph node resections. The median tumor size was 2.3±1 cm (range, 1-4 cm).The median chest tube duration was 1.5 days (range, 1-4 days) and the median length of stay was 2 days (range, 1-6 days).

In our experience, there was no conversion of uniportal segmentectomy to conventional VATS or open and this outcome is a direct consequence of greater skills acquired with experience (9).

Compared to segmentectomy by thoracotomy, uniportal thoracoscopic segmentectomy was associated with a shorter length of stay and with equivalent morbidity and mortality (10). The procedure has some difficulties: it is technically demanding and more challenging than lobectomy, requiring a perfect knowledge of the bronchial and arterial relationships and possible anomalies of arterial branches. Once bronchovascular structures have been divided, the division of the intersegmental plane is the most difficult step.

The advantage of using the camera in coordination with the instruments is that the vision is directed to the target tissue, bringing the instruments to address the target lesion from a sagital perspective, thus we can obtain similar angle of view as for open surgery (11). Instruments inserted parallel to videothoracoscope mimic inside the chest maneuvers performed during open surgery.

Another potential advantage of this approach could be a reduction in post-operative pain. There could be several explanations for this issue: only one intercostal space is involved and avoiding the use of a trocar could minimize the risk of intercostal nerve injury (during instrumentation, we try to apply the force over the superior aspect of the inferior rib through the utility incision). We have observed that patients operated by conventional VATS sometimes refer their pain towards the posterior and inferior incision, and only a few times refer pain in the utility incision. We strongly believe that this pain could be explained by trocar compression over the intercostal nerve during camera movement. Some authors have reported less postoperative pain in patients operated on for pneumothorax through a single-incision, in comparison to the classical triple-port approach (12). Further studies will be required to demonstrate that there is less pain with single incision techniques, compared to conventional VATS for segmentectomy.

Single-port VATS segmentectomy is a feasible and safe procedure in experienced VATS centers. The uniportal thoracoscopic segmental resection should be performed by skilled VATS surgeons and is a good option for small primary tumors, metastasic lesions or benign conditions not suitable to be performed by wedge resection.