Lung cancer has been one of the leading causes of death in patients with chronic obstructive pulmonary disease (COPD). In the United States, the incidence of lung cancer in patients with COPD (16.7/1,000 person-years) is much higher than reported in the general population (76.4/1,000,000 in men and 52.7/1,000,000 in women) (1). Whilst surgical resection remains the treatment of choice for patients with non-small cell lung cancer (NSCLC) and co-existing COPD, reduced lung function and poor respiratory reserve make these patients higher risk for surgery. Traditionally, this has resulted in thoracic surgeons adopting a more conservative approach in this patient group, a consequence of which is relatively strict selection criteria for surgical intervention (2). However, recent advances in the field of thoracic surgery, in particular video-assisted thoracic surgery (VATS), have led to a recent decline in the morbidity and mortality associated with surgery in NSCLC patients in comparison to ten years ago (3,4). There is an increasing body of evidence to suggest that surgery can be performed safely in individuals with both COPD and NSCLC, with emphasis on the need to revise the current selection criteria for these patients (5-7). The aim of this study was to determine whether minimally invasive techniques are beneficial for patients with NSCLC and co-existing COPD.

Between March 2000 and September 2010, 152 NSCLC patients with a diagnosis of COPD, in accordance with the Global Guidelines for the Diagnosis and Treatment of COPD (8), were enrolled in the study. Those enrolled included 55 cases of mild COPD [forced expiratory volume in 1 second/forced vital capacity (FEV1/FVC) ≤70%, FEV1 ≥80% predicted), 38 cases of moderate COPD (FEV1/FVC ≤70%, 50%≤ FEV1 <80% predicted), 46 cases of severe COPD (FEV1/FVC ≤70%, 30%≤ FEV1 <50% predicted) and 13 cases of extremely severe COPD (FEV1/FVC ≤70%, FEV1 <30% predicted). All tumors were deemed operable based on anatomical location and staging as defined by the Union for International Cancer Control (UICC) guidelines 2007 [1]. Of the 152 patients with NSCLC Sixty-two cases were stage I, fifty-nine were stage II with the remaining thirty-one stage IIIA. There were no patients with significant contraindications of cardiovascular, digestive, urinary, endocrine or other systemic disease. The same surgical team performed the operations, and all cases were divided in two groups with randomly: 57 patients underwent VATS major resection (VATS major resection, approach that used both direct vision and television monitor visualization) whilst the remaining 95 underwent c-VATS (complete VATS) (Table 1). 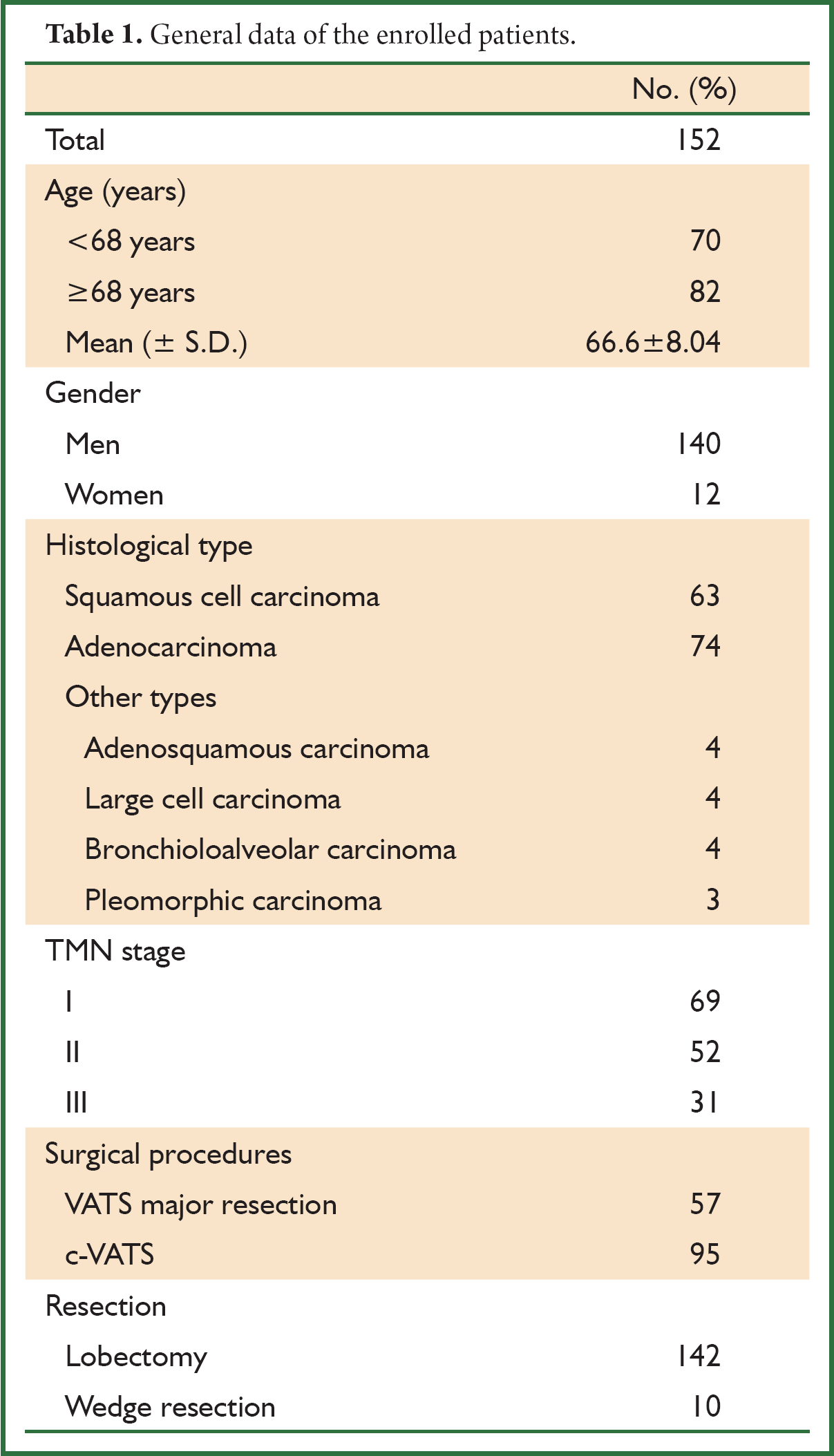 All patients recieved standardized COPD treatment for a minimum of one week, which included pharmaceutical therapy and chest physiotherapy to improve lung function. Intubation via a double-lumen endotracheal tube was used for all patients. Wedge resection was performed in 10 patients with severe/extremely severe COPD whilst the remaining 142 patients underwent standard lobectomy and lymphadenectomy. Patients were postoperatively managed with antibiotics, bronchial relaxation, spasmolytics, phlegm reduction techniques, oxygen therapy and physical expectoration. Patients with poor expectoration were managed with bronchoscopic suctioning, and those who experienced respiratory failure were treated with mechanical ventilation.

Postoperative pulmonary air leak was reported in twenty patients and managed with a prolonged (>14 days) indwelling chest tube, suction (where appropriate) and supportive treatment. Twenty-one patients experienced bronchospasm, which was treated with spasmolytic agents. Six patients were documented as having respiratory failure, hypoxia and carbon dioxide retention. Four of the six still required mechanical ventilation after symptomatic treatment. Two of these patients were discharged after removal of ventilation (three and six days). The other two patients unfortunately passed away (Table 2). 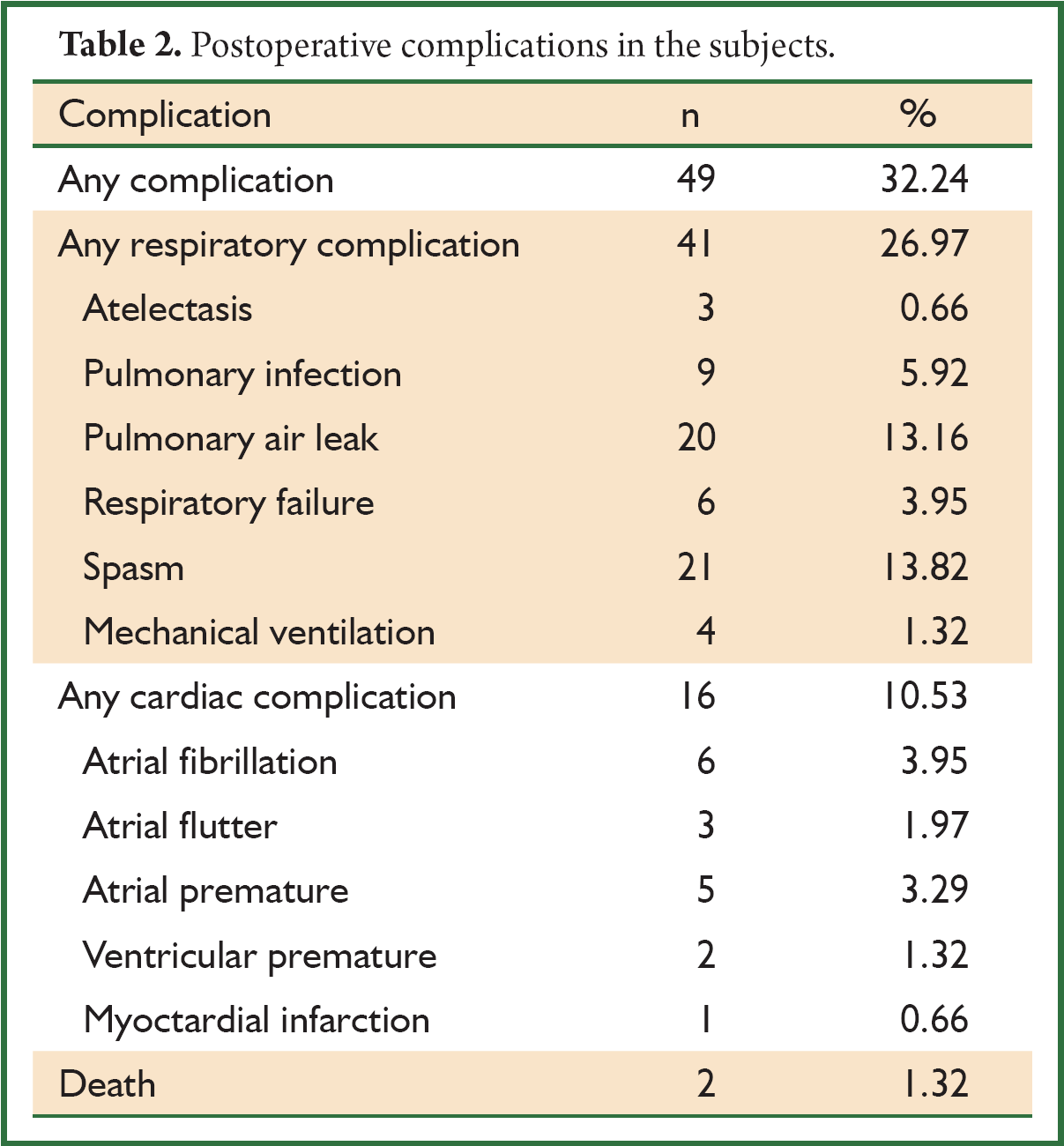 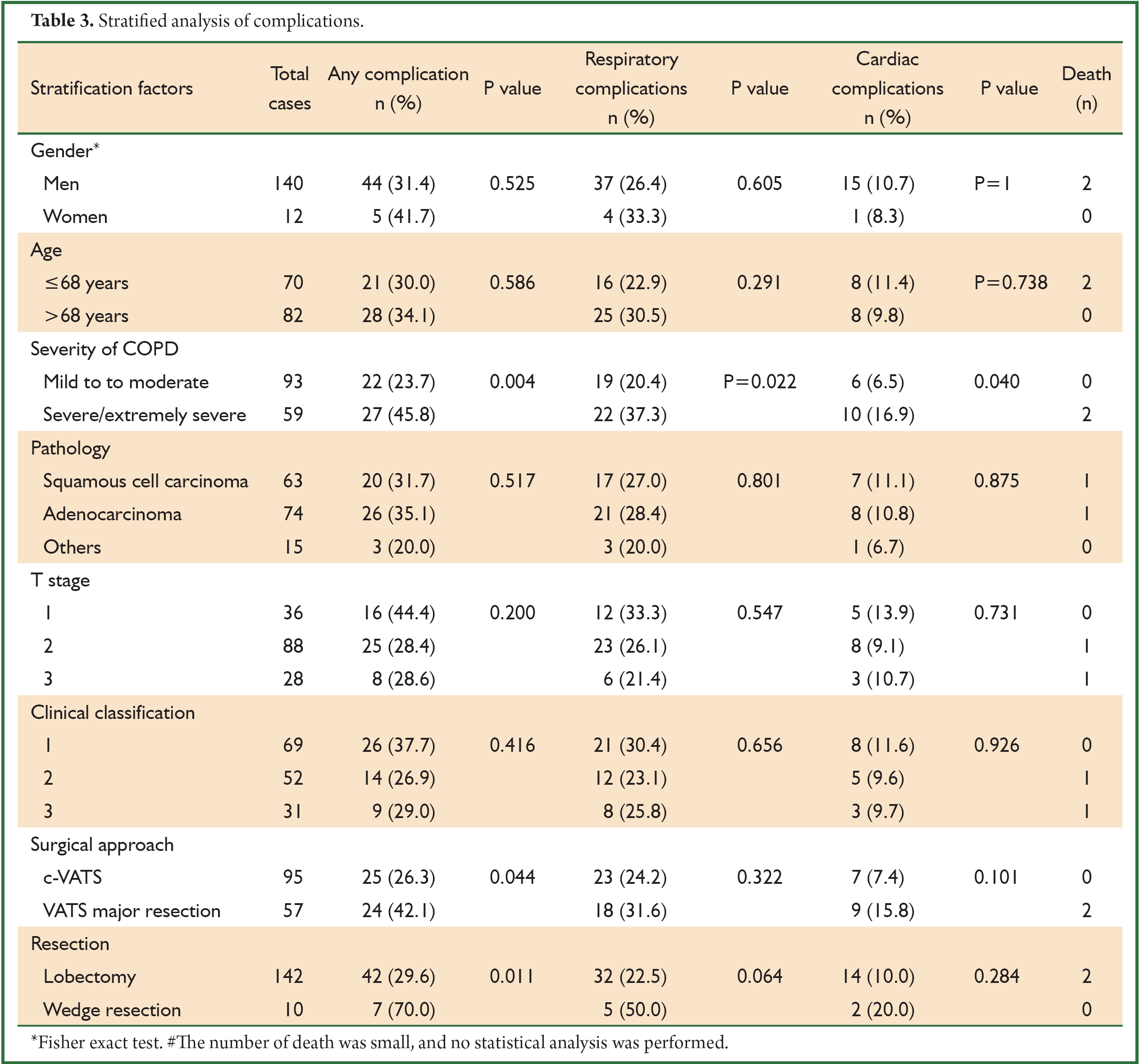 Patients with mild to moderate COPD had significantly shorter hospital stays than severe/extremely severe COPD patients (P=0.005) (Table 4). There was no significant difference in performance pre and post-operatively in the 6 minutes walk tests in the c-VATS group (P>0.05). A significantly reduced distance was observed in the VATS major resection group however (P<0.05) (Table 5).

Table 4. Influence of the severity of COPD on the surgery.
Full Table

The impact of surgical approach and resection extent on postoperative complications for the 59 severe/extremely severe COPD patients is reported in Table 6. Because of the poor lung function, 10 patients underwent a wedge resection considering that they cannot tolerate a lobectomy. A lower incidence of both respiratory and cardiac complications was shown in the c-VATS group compared with the VATS major resection group (P<0.05). No difference was found between the lobectomy group and the wedge resection group (P>0.05).

The reported benefits of c-VATS over traditional muscle splitting thoracotomy are many and include a reduction in post-operative pain and complications (9). The minimally invasive nature of the surgery reduces the adverse impact on pulmonary function; a result of limited damage to the chest wall and minimal trauma to the respiratory muscles. Therefore, for lung cancer patients with COPD in whom the risks of surgery are high, thoracoscopic minimally invasive surgery provides a safe alternative to conventional techniques. Even in individuals who can not tolerate radical lobectomy, partial resection via VATS may still be of therapeutic benefit.

In COPD patients who undergo surgery for NSCLC, the most common postoperative complication is parenchymal air leak (10). In the presented study, there was a difference in the morbidity mild to moderate COPD patients and those with severe/extremely severe COPD after surgery (20.4% vs. 37.3%, P=0.022), which was mainly attributed to parenchymal air leak (8.6% vs. 20.3%). This is likely attributed to the poor quality of the lung parenchyma and the diminished elastic recoil in emphysema, which, in turn, delays healing of the lung tissue. Other complications between the mild to moderate and severe/extremely severe patients included bronchospasm (8.6% vs. 23.7% respectively), and respiratory dysfunction (2.2% vs. 10.2% respectively). In addition, the rates of cardiac complications differed between the two groups (6.5% vs. 16.9%, P=0.040). This could be explained by chronic hypoxia, pulmonary hypertension and associated atrial volume-pressure function disorders in severe COPD patients. These disorders are known to precipitate arrhythmias and other cardiac complications in the presence of increased load in the right cardiopulmonary circulation.

Longer lengths of hospital stay were reported in the severe/extremely severe COPD group (16.0±8.8 vs. 9.7±4.1, P=0.005) as a result of an increase in complication rates. To minimize the effects of these complications, patients were encouraged to expectorate, undergo chest physiotherapy, and therapeutic agents which promote bronchial relaxation were administered during the post-operative period. Fiber-optic bronchoscopy and wound analgesia were also utilised to manage those having difficulty with expectoration. These active interventions are thought to be beneficial in the prevention of post-operative complications.

VATS major resection group and the c-VATS group, and revealed a significant difference (42.1% vs. 26.3%, P=0.044). This was particularly evident in patients with severe/extremely severe COPD. In this subpopulation, the frequency of pulmonary and cardiac complications was significantly lower in patients who underwent resection via c-VATS than in the VATS major resection group. These findings reflect the advantages of c-VATS attributed to its minimally invasive nature and are particularly relevant to patients with poor respiratory function as a consequence of severe/extremely severe COPD. It has also been proved that minimally invasive thoracoscopic surgery is reported to have less of an adverse effect to the residual lung function, whilst conventional thoracotomy is associated with a 30-50% decrease in pulmonary function (11-13).

The incidence of air leak in patients undergoing conventional thoracotomy for NSCLC has previously been reported at 52% among 21 severe/extremely severe COPD (10). In the current study, only 13.2% of patients in the c-VATS were reported to have a post-operative air leak. This was potentially related to optimization of our surgical technique where division and suture of pulmonary fissures was completed following the natural anatomical plane. Additionally, margins were trimmed in an inverted U-shape when dissecting the upper lung field. Vacuum suction and intensive bronchial relaxation were administered when appropriate, to improve postoperative lung compliance, reduced airway resistance and promote lung expansion. Optimization of post-operative nutrition was also employed to facilitate wound healing and prevent the occurence of air leakage.

The c-VATS approach was also more efficacious in reducing selective cardiac complications. In the presented study, only 5.3% of the patients with severe/extremely severe COPD in the c-VATS group suffered a cardiac arrhythmia. We have hypothesized that this was related to reduced postoperative pain and improved oxygenation in this subpopulation.

To assess postoperative recovery, quality of life and cardiopulmonary function in our cohort, we performed 6-minute walk tests before and one month after surgery. We found a remarkable decline in performance in the VATS major resection group regardless of COPD severity. On the contrary, no difference was observed in the c-VATS group before and after surgery. We believe that lung volume reduction contributed to this finding. In patients with severe COPD lung volume reduction can improve elastic recoil, reduce resistance to blood flow and blood perfusion is appropriately redistributed with an associated improvement in the ventilation/perfusion ratio. This has the combined effect of raising the oxygenation capacity. This benefit is demonstrated to be particularly evident when the tumor is located in an area severely compromised by COPD (10,14).

Standard radical surgery for NSCLC includes anatomical lobectomy plus lymph node dissection. It remains controversial however, as to whether patients with severe/extremely severe COPD can tolerate lobectomy. Sufficient residual lung function is a prerequisite for lung surgery, and good postoperative lung function can reduce both the risk of surgery and postoperative complications (15). Previous studies have suggested that eligibility for surgery in this population relies on a predicted FEV1 of not less than 0.8 L after surgery (16). In the general population a preoperative FEV1 ≥50% or predicted postoperative FEV1 of greater than 40% is generally considered acceptable (17,18). With improved surgical, anesthetic and perioperative care techniques however; the potential for curative surgery in patients with severe pulmonary insufficiency has become a reality. One study of 13 COPD patients undergoing lobectomy with a mean preoperative FEV1 of 49% reported a decline in lung function that was less than expected (19). In another study where radical resection of lung cancer for 29 severe COPD patients was performed, the authors concluded that patients with a predicted postoperative FEV1 of less than 40% could tolerate lobectomy if the tumor was located on the opposite side of emphysema with a perfusion of less than 10% (20). Taking advantage of the protective effects of thoracoscopic minimally invasive techniques, we can further expand the potential for curative surgery in patients with poor lung function. Following consideration of ventilation perfusion imaging, tumor location and size, and tracheal and vascular invasion, patients with preoperative FEV1 of less than 50% can be considered for surgery (Figure 1). These patients can be divided into two categories. The first group includes those who have lost the pulmonary function of the lobe where the tumor is located. This is typically seen in larger lesions that occlude the corresponding bronchi and compress the vessels, resulting in reduced perfusion. These patients may tolerate thoracoscopic resection with a FEV1 of <50% or even <30%, as long as there are no signs of respiratory failure. The second group includes patients who have satisfactory pulmonary function in the lobe, which corresponds to the tumor. In these patients, the postoperative lung function is predicted by formal assessment of lung function (pre-operative FEV1), heart function, pulmonary ventilation perfusion, chest CT examination, blood gas analysis, and calculation of the estimated postoperative FEV1 (epo FEV1) based on the BTS guidelines (21). With an estimated postoperative FEV1 of ≥35%, normal Ejection Fraction (EF) and PaCO2 of <50 mmHg, the patients can generally tolerate c-VATS lobectomy. In the case of an estimated postoperative FEV1 <35%, normal EF and PaCO2 of <50 mmHg, c-VATS partial resection is recommended to preserve postoperative pulmonary function. Surgery is contraindicated however if PaCO2 is ≥50 mmHg or contraction dysfunction is present at rest without oxygen administration. In this study, 49 patients (83.1%) successfully tolerated radical resection. This was less well tolerated in the patients with sever/extremely severe COPD. There was no significant difference in the incidence of any complication between those two groups (38.8% vs. 70.0%, P=0.072). 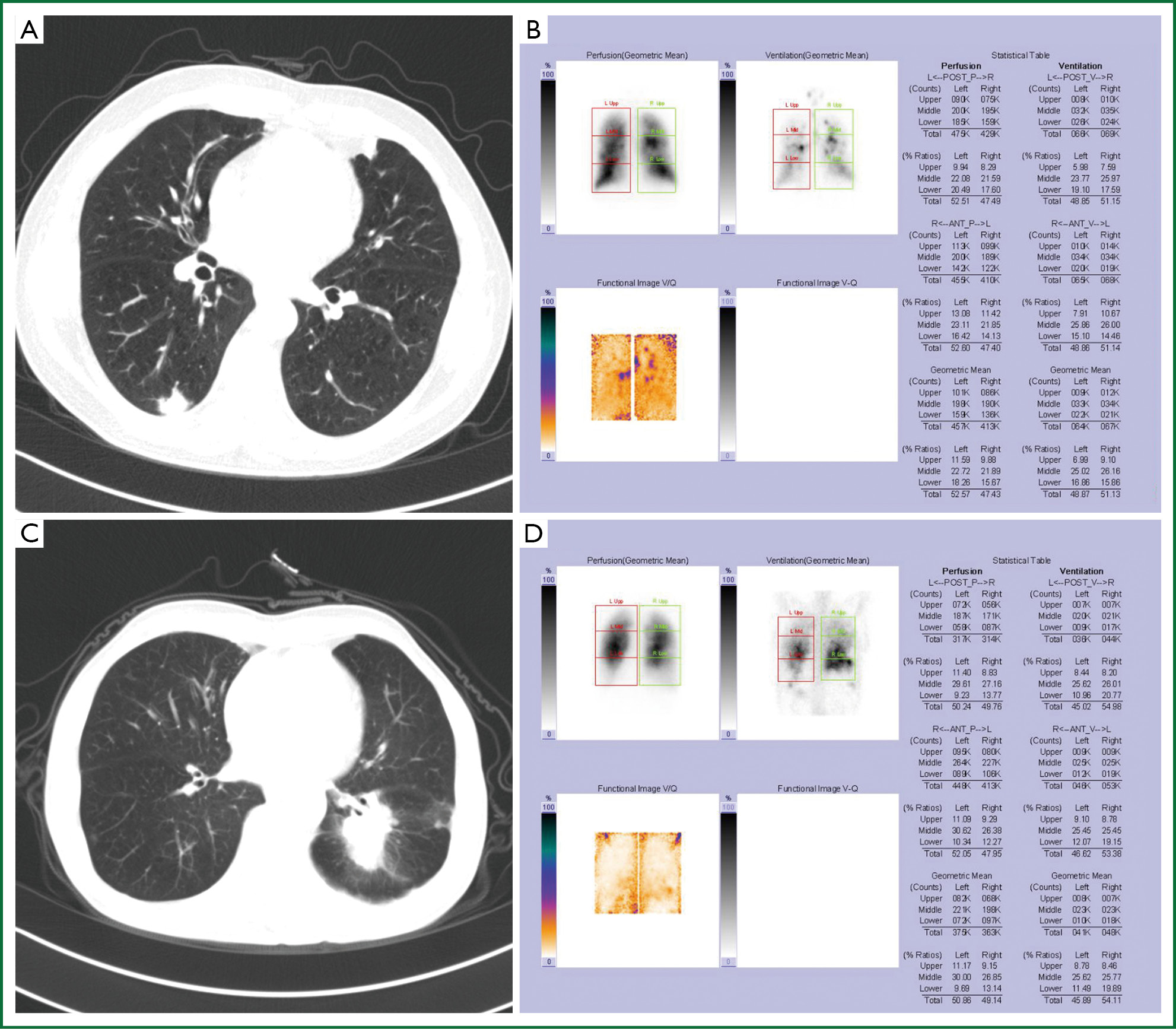 In conclusion, despite high incidence rates of postoperative complications in patients with NSCLC and COPD, VATS-guided approaches are suitable for the majority of patients and can significantly reduce post-operative morbidity. Controversy remains in regard to the selection criteria of patients with COPD for thoracoscopic lobectomy. In this population, radical or partial resection based on comprehensive evaluation can benefit patients with severe/extremely severe COPD and provide therapeutic opportunity for a wider subgroup of lung cancer patients with COPD.