Neoadjuvant therapy (preoperative chemotherapy, targeted therapy and radiotherapy, either alone or in combination) can significantly improve the resection rate for patients with locally advanced non-small cell lung cancer (NSCLC) and can prolong their survival (1). However, there is also concern that neoadjuvant therapy may promote pleural adhesion and vascular fragility, which is unfavorable to the anatomy and hemostasis and may increase the postoperative complication rate and perioperative mortality (2). The toxic effects of neoadjuvant therapy may undermine the constitution of patients and affect the patients’ ability to heal, making it difficult for patients to tolerate the conventional open thoracotomy (3), and the neoadjuvant therapy thus is not conducive to patients who were planed to undergo the surgical resection.

Compared with the conventional open thoracotomy, complete video-assisted thoracoscopic surgery (c-VATS) is less invasive and allows a faster recovery among patients (4,5). Theoretically, certain patients with poor physical fitness can still receive c-VATS after neoadjuvant therapy, even if they are unable to tolerate open thoracotomy. VATS has been performed in our center since 1994. To date, we have an accumulated experience of more than 1,000 cases of VATS (c-VATS, Hybrid VATS) lobectomies (6-10), including more than 150 cases of VATS sleeve lobectomies (7). Since 2006, we have attempted to perform c-VATS in locally advanced NSCLC patients after neoadjuvant therapy. To the best of our knowledge, there was no report on the feasibility and clinical effectiveness of c-VATS following neoadjuvant therapy for the treatment of locally advanced NSCLC. In this study, we explored the feasibility of c-VATS following neoadjuvant therapy (chemotherapy, targeted therapy and radiotherapy, either alone or in combination) for the treatment of patients with locally advanced NSCLC, and its perioperative complications.

A total of 43 IIA-IIIB NSCLC patients, who were treated in our center from January 2006 to March 2012, were included in this study. All patients were stratified based on their ECOG performance status [0-1]. These patients completed preoperative chemotherapy, targeted therapy, and radiotherapy (alone or in combination) and underwent c-VATS. There were 32 men and 11 women in the study, aged 35-76 years (mean: 56.30±10.15 years; median: 57 years). 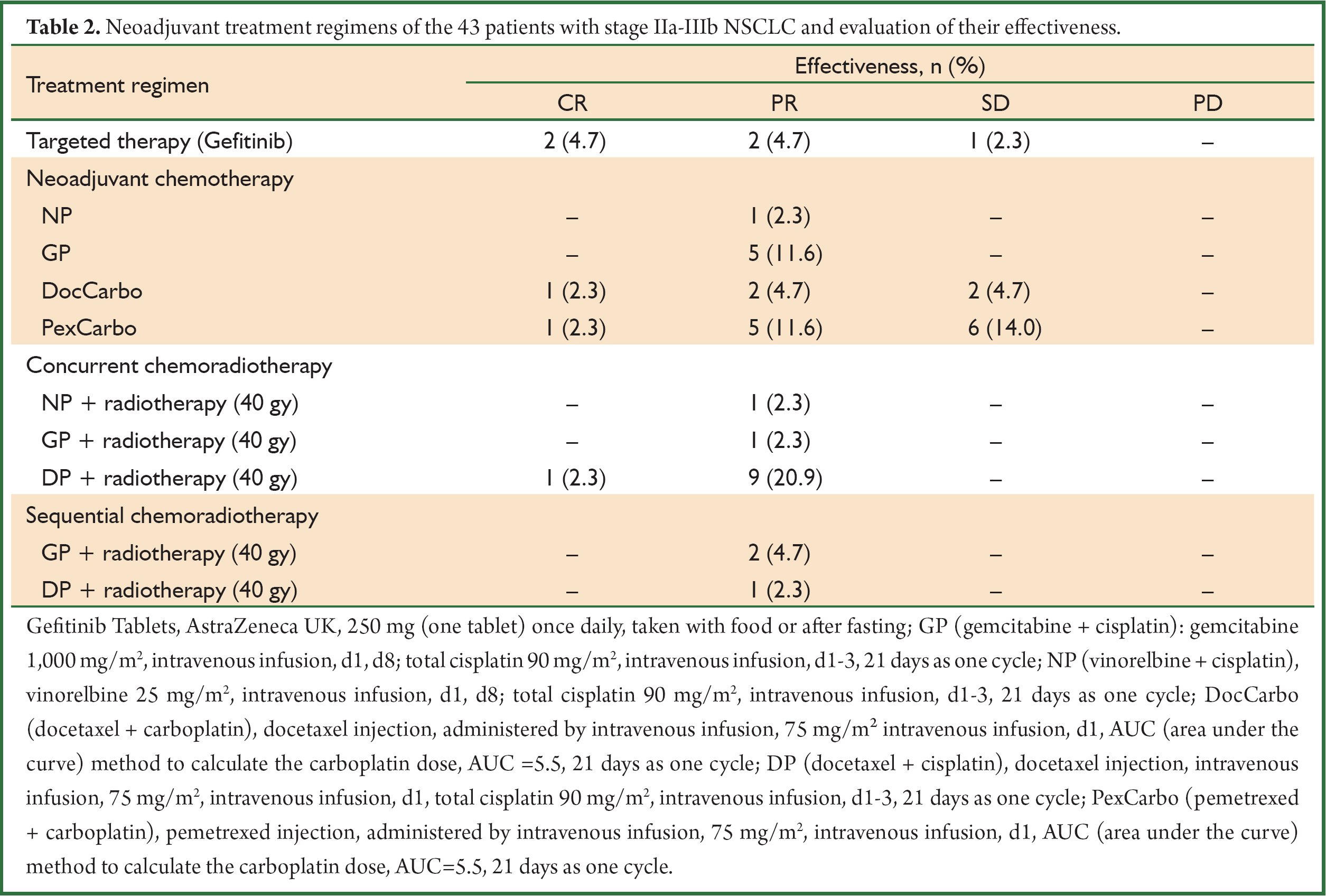 Table 2. Neoadjuvant treatment regimens of the 43 patients with stage IIa-IIIb NSCLC and evaluation of their effectiveness.
Full Table

The patients underwent a double-lumen endotracheal intubation under general anesthesia; in a contralateral supine position, the upper limb of the affected side was positioned on the hand bracket.

The surgeon stood in front of the patient, completing the procedures through the manipulative incision via the screen without using the rib distractor during the operation or operating under direct vision. The veins, arteries, and bronchia were separated anatomically, and the lymph nodes in stations 10 and 11 were dissected. The specimen bags were inserted to remove lung tissue, and the mediastinal lymph node dissection was subsequently performed again (on the left, stations 4, 5, 6, 7, 8, and 9; on the right, stations 2, 4, 7, 8, and 9). For patients whose tumor masses were closely related to blood vessels or bronchia, bronchial/vascular sleeve resection was selected as appropriate, and the patients were transferred to Hybrid VATS when necessary. The specific procedures were conducted in accord with the literature (4,11). The volume of the fluid replacement was strictly monitored intraoperatively, and the tracheal catheter was extubated in a routine manner after the operation.

A survival analysis was conducted using the Kaplan-Meier method, and survival was calculated beginning with the point in time that point patients were diagnosed with NSCLC. Follow-up continued until May 17, 2002. P<0.05 is considered to be statistically significant. Data were entered into the database and statistically analyzed using SPSS13.0 software (SPSS, Inc, Chicago, IL).

In terms of surgical complications, 5 patients developed postoperative complications (11.6%). Air leakage, chylothorax, wound infection, and respiratory failure were observed in five different patients. Another 67-year-old male patient died of heart failure three days after the operation. The patient had a history of preoperative hypertension and had received sequential radiochemotherapy. The patient continually suffered from radiation esophagitis, but his symptoms were remitted after symptomatic treatment. The operation went smoothly. On the second postoperative day, the patient died of sudden heart failure due to the inability to control the volume of fluid replacement. This patient represented the only perioperative death in this study (Table 3). 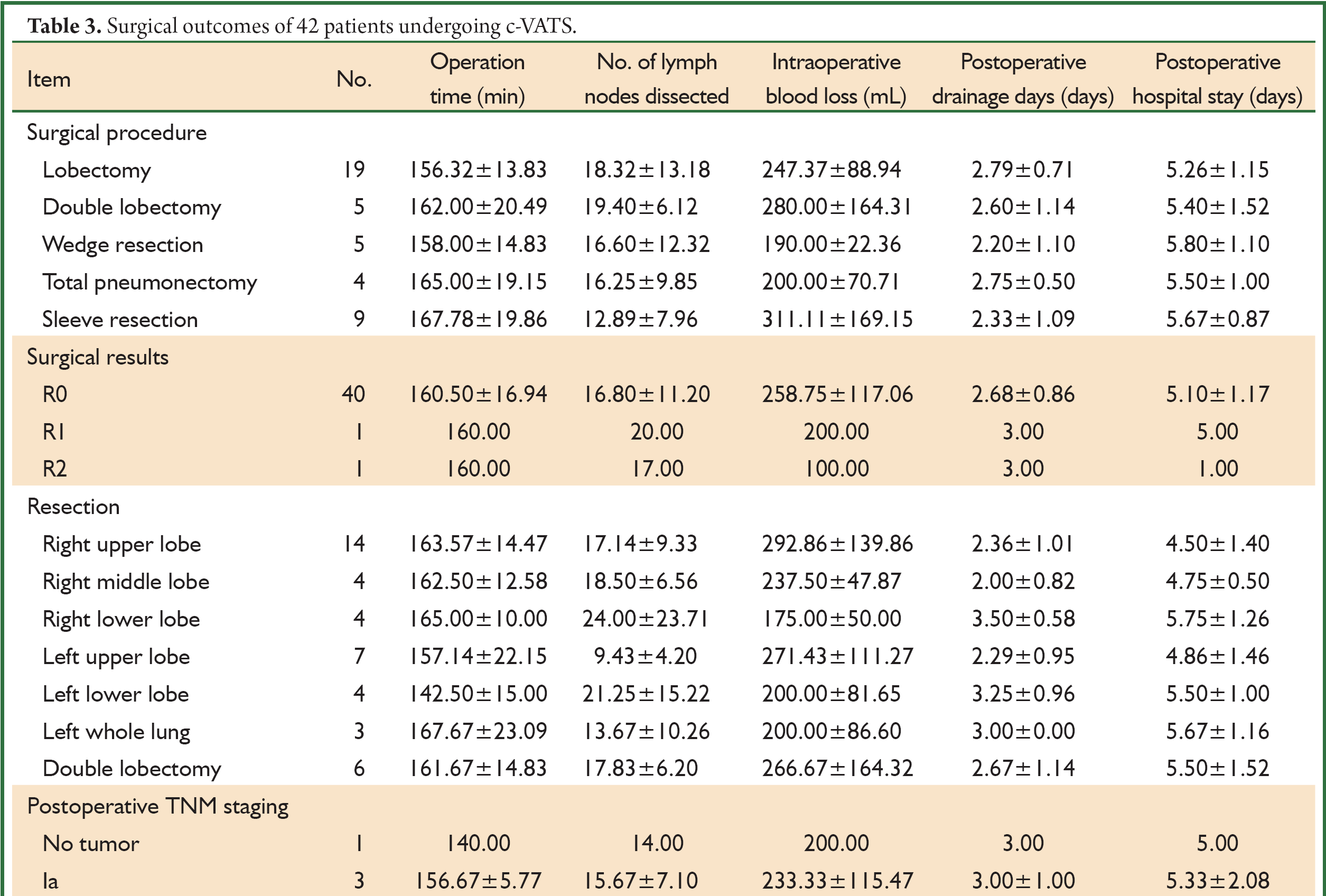 The rate of conversion to thoracotomy is another important indicator to evaluate the safety of VATS procedures. The literature shows that the rate of c-VATS conversion to thoracotomy ranges from 0-15.7% (14). No patient was converted to conventional thoracotomy in our study, but 7 patients were converted to Hybrid VATS with a conversion rate of 16.7%. It is believed that the preoperative adjuvant therapy (especially preoperative radiotherapy) has an obvious effect on a patient’s body. In fact, this treatment can easily induce local tissue inflammation, edema and organization and thus increase the tissue’s fragility, which can cause gap fuzziness and dense adhesion, making the surgery even more difficult. In this regard, Hybrid VATS has the advantages of thoracotomy under direct vision and a large operational space and at the same time can avoid the limitations of c-VATS; therefore, this therapy can replace thoracotomy in operations including tissue isolation, anatomic lobectomy, and systematic lymph node dissection (20). Lymph node dissection can be performed on different stations in line with the standards in this study with an average dissection number of lymph nodes of 16.88±10.93, which fully meets the criteria of conventional c-VATS and thoracotomy (14,15,21).

In this study, the incidence of postoperative complications and the mortality rate were 11.9% (5/42) and 2.4% (1/42), respectively, similar to those of thoracotomy following neoadjuvant therapy [Gilligan et al. (22): 10%, 224/229] and similar to those reported for other pure c-VATS procedures [McKenna et al. (16): 15.3%; Kim et al. (23): 9.1%]. A common concern is that adhesion due to neoadjuvant therapy can often result in a long operation time, high operational risk, and a high incidence of postoperative complications. However, this phenomenon was not observed in our study, which may be due to the following factors: (I) c-VATS is minimally invasive and less painful and predisposes patients to coughing. This treatment can therefore reduce infection, atelectasis, respiratory failure, and other complications caused by poor expectoration. In our current study, the mean postoperative drainage time did not exceed 3 days, which is more conducive to postoperative expectoration and also reduces the incidence of infections of the drainage opening; (II) c-VATS has a locally magnifying ability, which is not only beneficial to the identification of intraoperative vessels and bronchia but also conducive to the detection of small bleeding spots, lung fissures and bronchial fistulas, thereby reducing the occurrence of operation-related complications; (III) The surgeon’s experience in managing complex and highly difficult procedures under c-VATS is also important to reduce the occurrence of postoperative complications and to lower the operative mortality. Our rich experience in VATS lobectomies (3) facilitated the launching of this study, which enrolled nine patients who received bronchial sleeve resection/plasty, four of whom received c-VATS (completed), 5 of whom were converted to Hybrid VATS (completed), and only one of the nine patients experienced chylothorax but without a bronchopleural fistula; (IV) The application of neoadjuvant therapy was based on gene mutation detection and drug gene (protein) test results, which are conducive to increasing the tumor response rate and reducing the damage to normal tissues. In this study, all five of the EGFR mutation-positive patients selected gefitinib therapy; TS enzyme expression-negative patients selected pemetrexed therapy (12); all of the patients without remarkable clinical significance in multi-drug gene (protein) expression selected the third-generation platinum-based chemotherapy with an overall response rate of 58.1%. These approaches can avoid poor impacts (e.g., poor target effects, strong impact on normal tissue, and impaired immunity) due to less optimized neoadjuvant therapy; (V) Because the impact of the different neoadjuvant therapy regimens on postoperative recovery differs, it is important to reduce the difficulty of the operation by selecting neoadjuvant therapy regimens based on genetic testing and drug gene (protein) detection results while reducing the proportion of preoperative radiotherapy. As shown by our study, the pre-operative application of targeted therapy drugs had a minimal impact on human tissues and typically did not cause remarkable tissue adhesion, scarring, or edema while maintaining a vascular toughness that was close to normal. On the contrary, radiotherapy often leads to breast tissue edema or adhesion, thus increasing the difficulty of the procedures. Among the 16 patients receiving preoperative radiotherapy, 6 patients (6/16, 37.5%) were converted to Hybrid VATS; among the remaining patients who did not receive radiotherapy, only one patient (1/27, 3.7%) was converted to Hybrid VATS. In addition, several scholars (17) have argued that a preoperative radiotherapy dose of >45 Gy might significantly increase the incidence of postoperative complications. This finding was validated in our current study: the incidence of postoperative complications was not high among patients receiving preoperative radiotherapy, which might be observed because the radiotherapy dose in this study was not higher than 40 Gy.

The long-term efficacy of this study was satisfactory with a 1-year survival rate of 94%, a 2-year survival rate of 79%, and a 3-year survival rate of 65%, which may be observed because c-VATS is minimally invasive. After neoadjuvant therapy, patients may still tolerate c-VATS, even with a poor constitution or impaired lung function. Therefore, more patients can receive this procedure, and the overall survival rate is also increased. Patients can recover from c-VATS faster and were able to complete postoperative adjuvant radiochemotherapy. Lymph node dissection of c-VATS is not inferior to conventional thoracotomy. The rational combination of c-VATS with neoadjuvant treatment improves the overall response rate. However, a larger sample size is warranted to validate this conclusion further.

This study investigated the impact of neoadjuvant therapy on c-VATS among NSCLC patients, but it failed to compare the findings with those of thoracotomy. Furthermore, the success of c-VATS is highly dependent on the surgeon’s experience and skills. The postoperative complications and long-term efficacy differ if the c-VATS is performed by different surgeons. Additionally, the small sample size of this study can easily cause bias. Neoadjuvant therapy for tumors has become increasingly popular (24), and in our current study, we assessed neoadjuvant treatment regimens based on the results of genetic tests and drug molecular detection and assessed the relevant indicators. However, these detection methods also resulted in a diversity of neoadjuvant treatment regimens, causing the statistical analysis to be more difficult. No definite conclusion was reached on the impact of diverse neoadjuvant regimens on the perioperative and long-term survival rates of c-VATS. Finally, because this study was initiated in 2006, during which both the 6th and the 7th editions of the TNM staging system were adopted, and although the 7th edition of the system was used during patient enrollment, the criteria used for assessing the efficacy of neoadjuvant therapy were not fully consistent. Thus, multi-center, prospective, randomized and controlled trials with larger sample sizes are warranted to clarify further the role of c-VATS following neoadjuvant therapy in the treatment of NSCLC.

In conclusion, c-VATS following neoadjuvant therapy is safe and feasible for the treatment of locally advanced NSCLC, and its long-term efficacy is satisfactory. In our current study, the application of multiple preoperative assessment methodologies, including fibrobronchoscopy, EBUS, PET-CT, mediastinoscopy, and chest CT, improved the outcomes by displaying the scope of the intrabronchial and peripheral tumor invasion and enabling the assessment of the effectiveness of the surgical regimens. Furthermore, the routinely performed intraoperative frozen pathological examination of the resection margins ensured a cancer-negative surgical margin and effectively reduced postoperative local recurrences.