Initially, sleeve lobectomy was considered as an alternative procedure to pneumonectomy for patients with low-grade, centrally located lesions and limited cardiopulmonary reserve. While, as the rapid development of surgical techniques in last decades, sleeve lobectomy has become the first line intervention, rather than a compromise to pneumonectomy, for centrally located lesions of all grades. With the widespread of thoracoscopic instrument, video-assisted bronchial sleeve lobectomy (VABSL), a minimally invasive with more technically challenging procedure, has gradually been an attractive treatment option for qualifying patients. Here we present a video-assisted bronchial sleeve lobectomy case for communicating operative techniques.

Sleeve lobectomy is commonly indicated for lesions involving main or lobar bronchi. So the flexible bronchoscopy is the most important diagnostic step in identifying potential candidates for sleeve procedure. Further, the tissue biopsy can also be done by bronchoscopy to defining the malignancy and to assess the tumor extension. In addition, computed tomography (CT) as well as Magnetic resonance imaging (MRI), which provides better appreciation of lesion size, extent and location relative to thoracic structures, play a supplement role to bronchoscopy in assessing the potential candidates. In addition to anatomic location, the lymph node metastasis condition, i.e. the N factor, is another important factor for potential candidates screening. The presence of N2 does not contraindicate the sleeve procedure while impairs long term outcomes for the risk of systemic recurrences.

About 20 days prior to admission to our institution, the patient suffered from irritable cough, occasionally with blood-stained sputum accompanied by low grade fever. After the chest radiograph examination, the patient was diagnosed as left pulmonary infection by local hospital and given anti-inflammatory, symptomatic treatment. But the symptom did not alleviate after the therapy. Chest CT shows left upper lobe space occupying lesion (Figure 1). 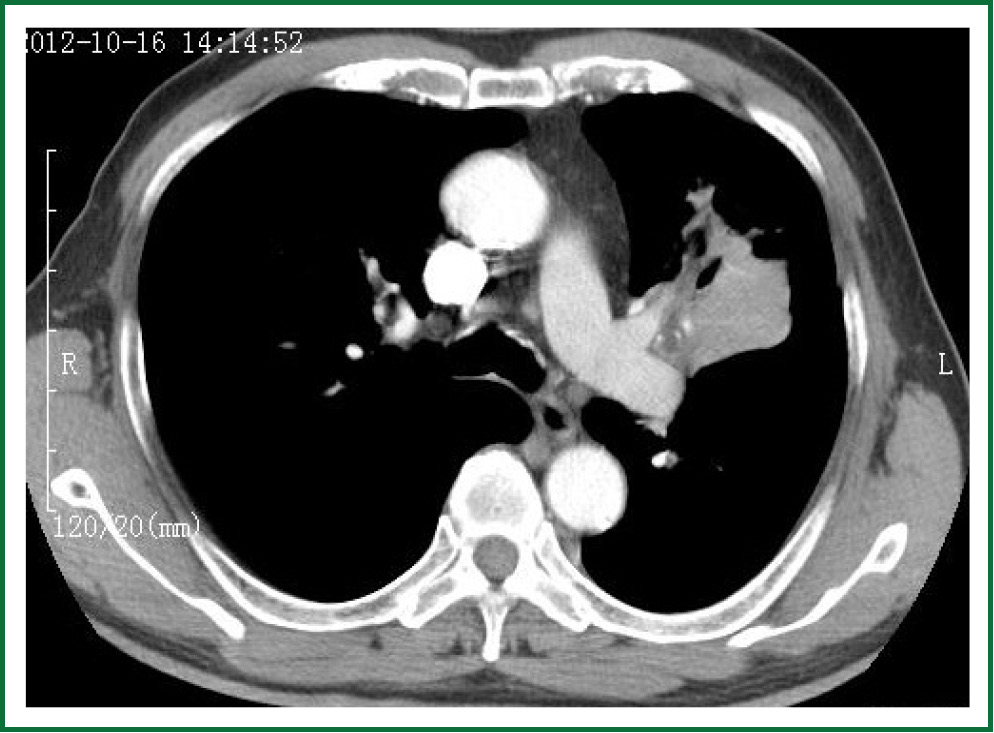 After admitted to our department, the patient is receiving complete medical examination and diagnosed as left upper lobe squamous-cell carcinoma. History, clinical and laboratory data indicate the patient’s cardio-pulmonary function is in good condition and without any sign of metastasis.

Bronchoscope examination shows a neoplasm, fully obstruct the lumen, in the opening of Left Upper Lobe Bronchus (Figure 2). The neoplasm is brittle and prone to bleeding when touched. Brush biopsy and sputum examination both shows squamous-cell carcinoma. 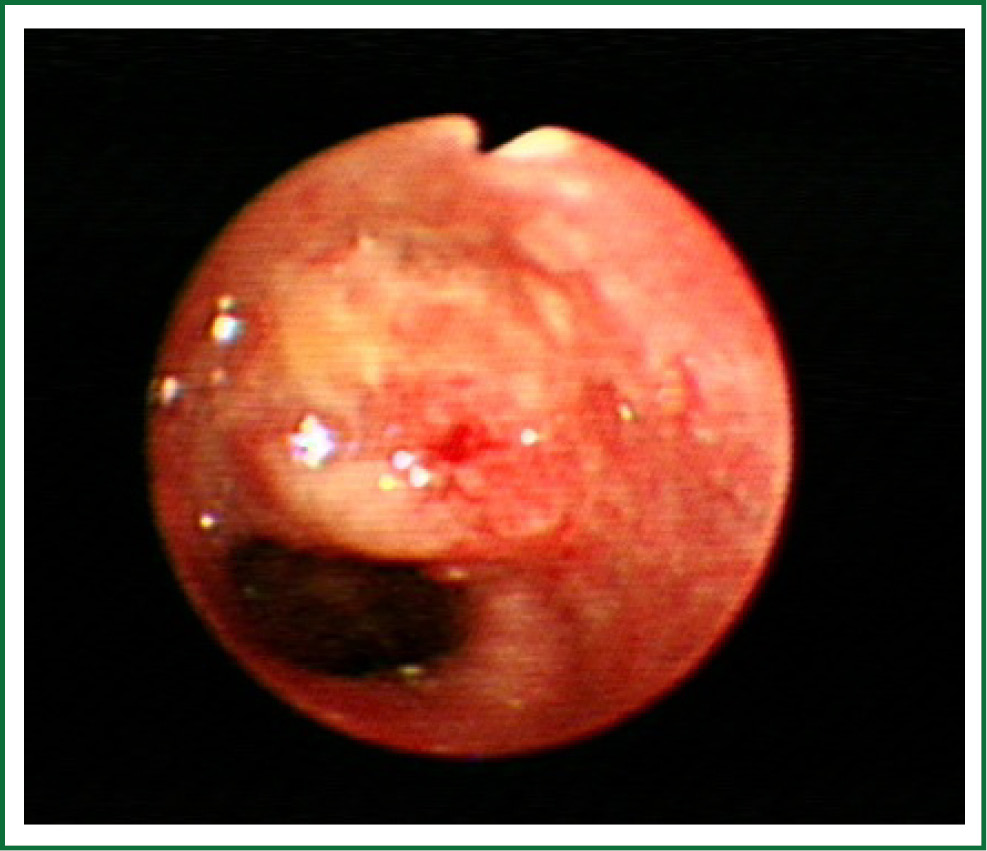 The procedure is generally mirrors that of open surgery: releasing of inferior pulmonary ligament is recommended to bring enough mobility, dissection begins at anterior wall of the hilum, followed by the mobilization and transection of the left superior pulmonary vein, then open the fissure to mobilization and transection of the pulmonary artery and it’s lobar branches. Finally is the bronchial resection, frozen histological evaluation and anastomosis.

Although both absorbable and prolene suture are applied in this procedure, we prefer to use the 3-0 absorbable sutures to avoidance of foreign body left.

We perform the anastomosis in a running technique reinforce with three point interrupted suturing. We chose the mind point of offside wall of bronchus as the starting point in interrupted fashion. Once the starting point is located, a U-shape suturing technique is recommended to enhance the tensile strength. Absorbable 3-0 sutures, with knots placed outside the bronchial lumen, are used to decrease the possibility of stricture and granuloma formation. Then followed by the continuous suturing clockwise and counter clockwise for one third of the circumference. Another two points of interrupted suturing is followed when the continuous suturing is finished. The final step is to anastomosis the remaining one third of the bronchus circumference in uninterrupted fashion. This anastomosis method can secure the tensile strength as well as saving the operation time. Besides, according to our practice, patient enjoys the comparable post-operation outcomes compared with interrupted suturing.

In last decades, the minimally invasive surgery prevailed in the thoracic surgery and more patients are willing to take the minimally invasive surgery rather than open surgery if indication qualified. These technically break though greatly propel the development of thoracic surgery and almost every procedure done in open way could be done in VATS fashion either.

When compare to the open surgery, the VATS procedure is generally more technically challenging for the transmission from direct-view to locally 2D screen, from multi-angle multi-direction operation field to one directional operation field. So demands much more clear anatomical view of travel, distribution and variation of pulmonary vessels than open surgery.

Like all other procedures, VATS sleeve lobectomy has its’ nature learning curve for both the surgeon and the assistant. According to my own experience, at least 200 cases VATS lobectomy and 30 cases open sleeve procedures should be done, as to lay the anatomical as well as operative technique foundation, before you can perform the video-assisted bronchial sleeve lobectomy procedure.

Finally, Blocked view as well as limited operation space set obstacles for offside of bronchus anastomosis. Under the guidance of “from difficult to easy” principal, we choose the farthest point from surgeon, mid-point of offside of bronchus, as the starting point. Once the first point is settled, the rest anastomosis is easier than the traditional approach. Hence, this method can lower the difficulty and increase the smoothness of anastomosis as a whole.

Thanks for the guidance of Dr, Ara A. Vaporciyan, Section Chief of the Division of Cardiothoracic Surgery, I learn the VATS procedures at The University of Texas MD Anderson Cancer Center from April 2006 to October 2006 in which period I accept the systematic training and master key techniques in those procedures. When returning to China, I began to perform VATS procedures to treat early-stage NSCLC and benign disease patients at our department. In 2009, we report the first video-assisted bronchial sleeve lobectomy case in china.