Over the past several years, the long-term-survival of patients suffering from coronary heart disease has been considerably enhanced by improved pharmacological and surgical interventions (1). However, this has led to an increased prevalence of chronic heart failure (2), a symptomatic disease, accompanied by various other end-organ dysfunctions as a result of low cardiac output.

As the percentage of cardiac output delivered to the kidneys is 25% (3), the function of the kidneys is particularly dependent on blood circulation conditions. Chronic heart failure in conjunction with low cardiac output could therefore lead to so called ‘cardiorenal syndrome’ type 2, which is defined by cardiac abnormalities resulting in impaired kidney function as a result of hypoperfusion, venous congestion and inflammation (4-6). It is also known, that there is a direct correlation between the prognosis of heart failure patients and the grade of kidney dysfunction (7,8). The simultaneous development of both cardiac- and renal failure is associated with increased chances of mortality (9).

In case of end-stage chronic heart failure, cardiac transplantation is still the therapy of choice, although new treatment strategies have to be developed to overcome the ongoing insufficient donor organ supply. One promising alternative to address the aforementioned issue is the implantation of left ventricular assist devices (LVAD) which is one of the fastest-developing techniques in cardiac surgery, due consistent technological advancements allowing less invasive surgical techniques and miniaturization (10-13).

In contrast to the standard surgical approach (SAS) the less invasive implantation technique (LIS) is associated with reduced trauma, blood loss and infection rate (14) and should therefore lead to a better outcome in terms of kidney function.

Although the effects of conventional LVAD implantation on short- and long-term renal function (5,15) has been well studied, little information is available on the corresponding effects of less invasive surgical approaches.

In this study, we have therefore assessed the impact of LVAD implantation with a minimally invasive technique on the renal function of heart failure patients who underwent dialysis due to perioperative kidney failure.

Patient plasma creatinine- and urea-levels were assessed on the hospital admission and discharge dates. GFR was calculated using the MDRD (Modification of Diet in Renal Disease): 186 × Serum Creatinine−1.154 × Age−0.203 × [0.742; for female patients].

This study was performed as per the principles outlined in the Declaration of Helsinki and approved by the local institutional review board. 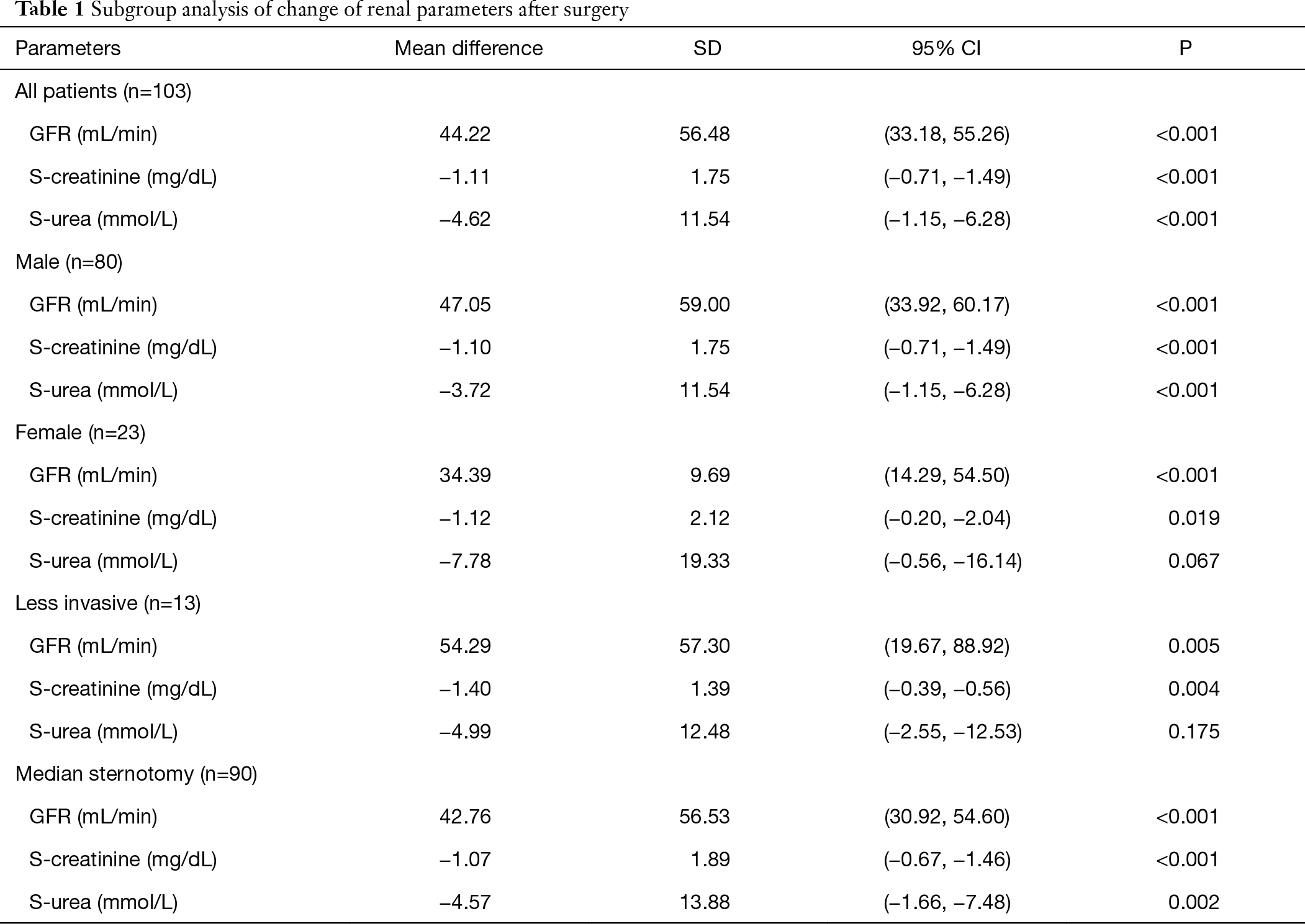 Cardiac output is crucial for renal function: chronic heart failure accompanied by low cardiac output leads to decreased effective circulating volume as well as backward failure with a high venous pressure, which is directly transmitted to the renal tubular system. This leads to decreasing net filtration and therefore to a decreased GFR, resulting in an activation of the neurohumeral system (4,5,16). Hence a therapy for improvement of cardiac output could enhance renal function in heart failure patients.

In endstage chronic heart failure, the gold standard for therapy is still cardiac transplantation however the implantation of an LVAD is a promising alternative. Due to consistently improved technology, e.g., pump size miniaturization and less-LISs, the implantation of LVADs is one of the fastest-developing fields in cardiac surgery (10,17), thus the number of LVAD implantations worldwide has surpassed the number of cardiac transplantations (18). It is known that the major advantages of a less invasive surgical approach are reduction of trauma, reduced blood loss and less infections as well as decreased duration of intensive care unit and in-hospital stay (14,19), but little is known on the impact of LIS on renal function. The aim of our study was therefore the assessment of the relationship between LVAD implantation and its impact on kidney function with regard to minimally invasive surgery.

These results corroborate data from preceding investigations, as the impact of ventricular assist device on renal function has been well investigated (20-22). In summary, short term results show that the implantation of a continuous flow LVAD maintains or improves renal function.

A study conducted by Brisco et al. showed that there is a significant change of renal function in patients who underwent mechanical circulatory support. In their study, the median improvement of GFR in the first weeks was 48.9% (P<0.001), with 22.3% of the population improving ≥100% (23). However, they also stated that the improvements appeared to be transient: after one year of follow up, the GFR was only 6.7% higher than the pre-implant value (23). Further studies are therefore necessary to confirm the long-term effects of SAS ventricular assist device implantation and to assess the long-term results of LIS implantation in view of renal function.

Table 2 Mean difference of LIS vs. SAS and female vs. male
Full table

The reasons for these contradictions remain unclear, but might be related to the lower number of female patients (male vs. female: n=80:23) and the patients, who underwent less invasive surgery (SAS vs. LIS: n=90:13) in our study, or to potential baseline differences in those groups (e.g., mean age, degree of renal failure or preoperative ejection fraction).

It is likely that a larger study population with equally distributed baseline characteristics may provide a clearer dataset for the differences between both gender and surgical approach should be found, with regard to statistical significance.

Our study therefore confirms the findings of previous studies investigating the impact of ventricular assist devices on kidney function. Moreover, we found a higher improvement of renal parameters after less invasive LVAD implantation in comparison to the standard surgical approach via sternotomy. There was also no significant difference between the mean change of renal parameters between male and female patients. Nevertheless, we expect that in a higher study population with equally distributed baseline characteristics, significant differences in the mean changes of renal parameters may be found.

Further studies on a larger data set are warranted to improve statistical significance of the data and uncover long term results of less invasive LVAD implantation.

LVAD implantation improves kidney function in patients with renal dysfunction. A considerable difference in the change of renal parameters was detected in patients with LIS as compared to SAS, which was not significant possibly due to the limited size of the patient cohort (n=13).

Conﬂicts of Interest: JDS is a consultant for Thoratec Corporation as well as HeartWare Inc. The other authors have no conﬂicts of interest to declare.

Ethical Statement: This study was performed as per the principles outlined in the Declaration of Helsinki and approved by the local institutional review board.