Recent frequent use of biological valves (1) and longer life expectancy has increased the number of reoperative aortic valve replacements (AVR). From 1997 to 2006, number of patients undergoing AVR who had previous coronary artery bypass grafting (CABG) has also increased by 60.4% (1).

Minimally invasive approaches for valve surgery were introduced in the late 1990s (2,3). Upper hemisternotomy is a typically used approach and has multiple clinical advantages such as decreased postoperative mechanical ventilation, bleeding and hospital stay (4,5). We adopted this approach for reoperative aortic valve replacement. Reoperative minimal access AVR (re-mini AVR) avoids the dissection of mediastinal tissues and protects previous grafts from iatrogenic trauma especially the left internal mammary artery (LIMA) to left anterior descending (LAD) artery (6). This approach is suitable for all re-AVR, but especially for high risk patients such as octogenarians (7).

Re-mini AVR is indicated for all isolated reoperative aortic valve replacements. Concomitant surgery in the ascending aorta can be performed.

Contraindications for re-mini AVR are the following:

Three dimensional computed tomographies are performed in all patients undergoing re-mini AVR. This allows assessing the anatomic relationship between the sternum, the coronary graft(s), ventricle and the wires. Other routine tests such as coronary angiogram and echocardiogram are performed prior to the operation.

Endotracheal intubation followed by pulmonary artery catheter insertion is performed by the anesthesiologist. A pacing port pulmonary artery catheter is used, due to the difficulty placing ventricular wire when re-mini AVR is performed. Transesophageal echocardiography (TEE) probe is inserted to allow monitoring of the valve insertion, left ventricular distention and the de-airing process. External defibrillator pads are attached to the patient prior to prepping and draping.

Prior to sternotomy, CPB access is obtained. We use peripheral cannulation for almost all cases. For arterial access, right axillary artery or femoral artery is cannulated. Right axillary artery is the preferred approach. 6-10 mm polytetrafluoroethylene (PTFE) graft is sutured to the native artery as an interposition graft (Figure 1). For venous cannulation, percutaneous femoral venous approach is used. Using Seldinger technique, needle puncture followed by guidewire, dilator and venous cannula insertion is performed. Position of the cannula is confirmed using TEE. 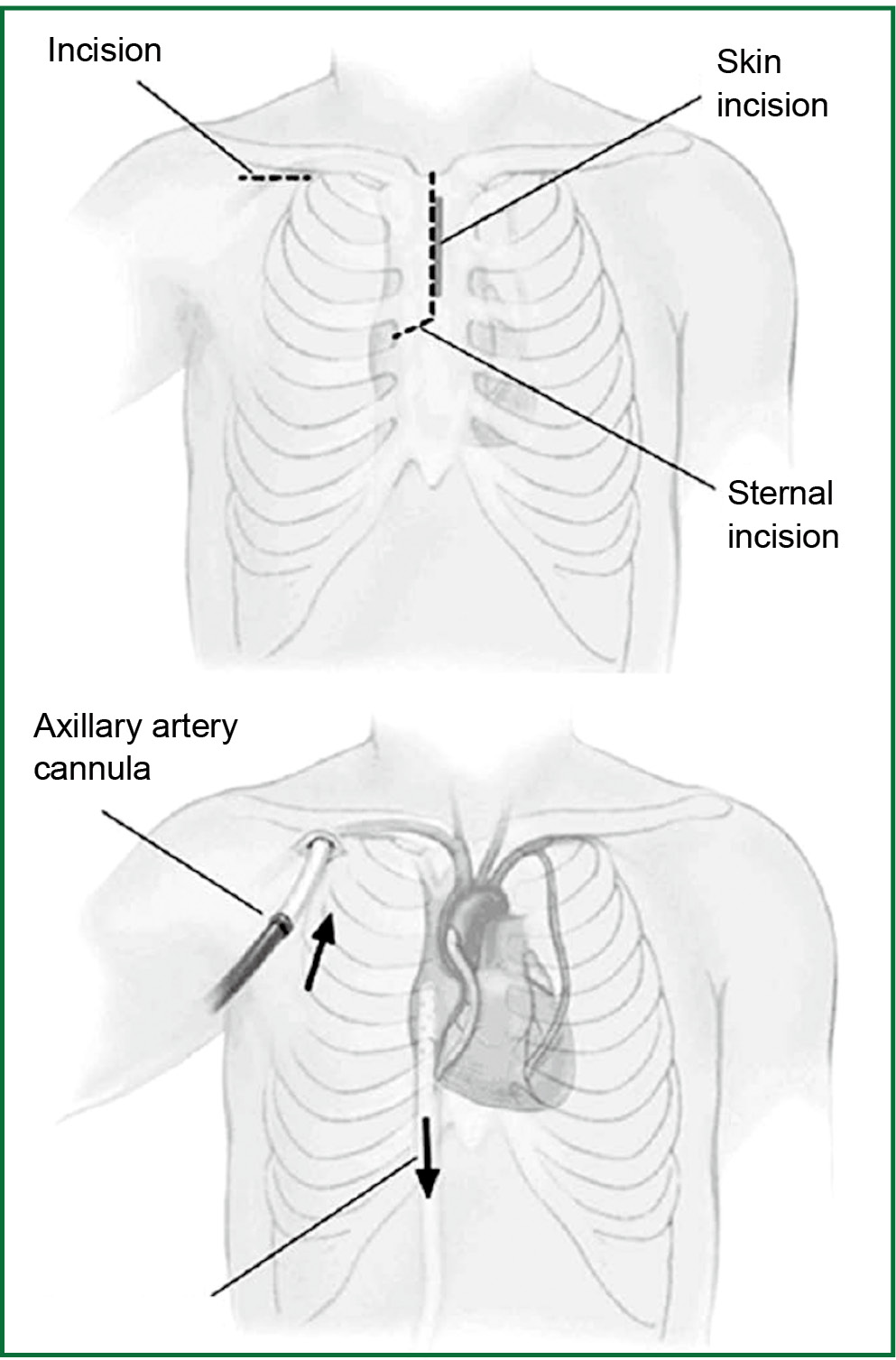 The upper J-shaped hemisternotomy is performed to the 4th intercostal space using oscillating saw. CPB is established prior to dividing posterior table of the sternum. Once sternum is divided, sternal retracter is applied.

The key to this procedure is to limit the amount of mediastinal dissection. Dissection is performed around ascending aorta for application of aortic crossc-lamp and aortotomy. Only proximal aortocoronary graft is dissected and previous LIMA graft is left untouched. 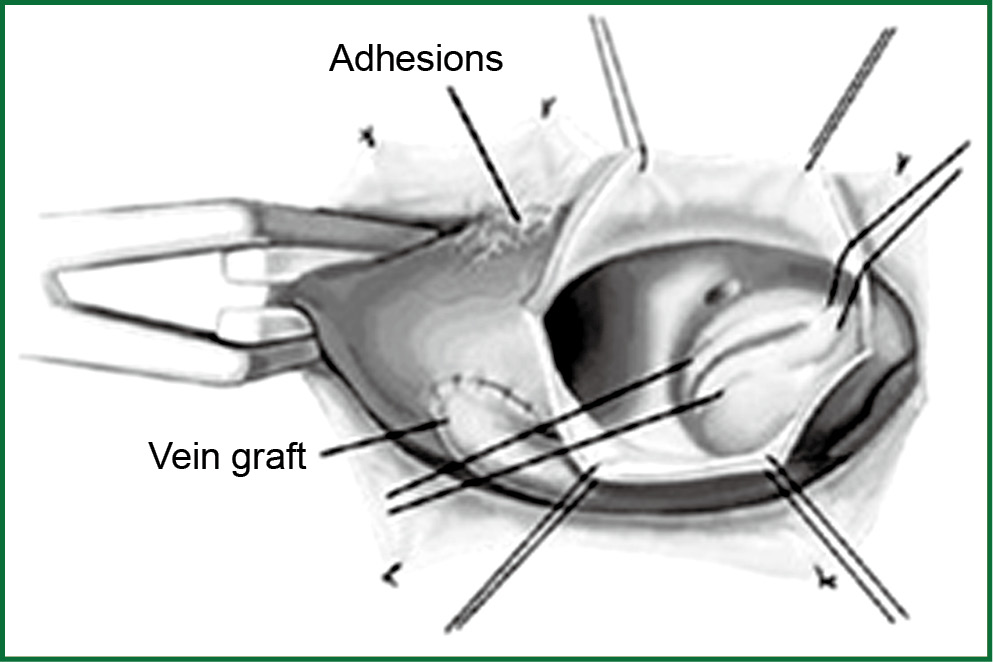 When a patent LIMA to LAD graft is present, constant blood is supplied to the myocardium through the subclavian artery which can cause ventricular fibrillation while blood return through coronary ostium obscures the view during annular suture placement. The goal of cooling is to achieve 25-30 °C with the patent LIMA. When cardiac activity is observed due to patent LIMA graft, additional systemic potassium (40 mEq) is given through the pump to a goal of 6.0-7.0 mEq. Ultrafiltration is used to lower the potassium level at the end of the case if this technique was used. When the field is obscured by blood return from the left coronary ostium, pump flow is temporarily lowered for a few seconds to place the annular sutures. Details of the steps and safety in patients with patent LIMA are discussed in previous publications (9).

Defibrillation after unclamping is performed using external pads. Deairing is monitored by TEE and carbon dioxide is used in the field to limit the amount of air. A ventricular pacing wire is placed in right ventricular muscle if it is impossible to place a transvenous pacing wire due to technical or anatomical reasons. Chest tube is placed in the right pleural space and CPB is weaned and patient decannulated. Chest is closed in standard fashion.

The largest case series to date confirming the safety of re-mini AVR is the series from Tabata and associates reporting outcomes of 146 patients who underwent re-mini AVR at BWH (8). The operative mortality was 4.1%, conversion to full sternotomy was 2.7%, reoperation was 0.7%, packed red blood cell (PRBC) requirement was 78.8% and median hospital stay was 8 days. Five year actuarial survival was 85%. There was no LIMA injury using this technique. They concluded that this approach is safe and feasible. Some small case series have reported no death (11,12), but most reported operative mortality of 3-6% (8,13-16) with minimal rates of complications.

Re-mini AVR for the elderly

Recently transcatheter aortic valve replacement (TAVR) has gained spotlight for patients with high risk. TAVR has established outcomes in patients with inoperable risks and has equal outcomes to surgery in high risk patients (18,19).

Kaneko and associates compared 51 octogenarians who underwent re-mini AVR to 54 octogenarians who underwent conventional re-AVR (7). Although operative mortality was similar between two groups (3.9% vs. 9.2%, P=0.438), Kaplan-Meier analysis showed survival benefit at both 1 year and 5 years (38%±17.6% vs. 65%±15.7%, P=0.028) favoring re-mini AVR. Predictors of mortality were heparin induced thrombocytopenia, reoperation for bleeding, increase in age, full sternotomy and infectious complication. They concluded that re-mini AVR may have advantage in these patients by limiting dissection and trauma in a patient group that has low tolerance to morbidity. Re-mini AVR may have a role even in high risk patients who have risks undergoing TAVR such as annular calcification extending to aorto-mitral curtain or low coronary ostium.

This approach requires careful attention to myocardial protection especially in case of patent LIMA and coordination with perfusionist when systemic hyperkalemia and brief stopping of CPB is used. Not only good judgement from surgeons but also good teamwork by surgeon, anesthesiologist and perfusionist is required to successfully perform this minimally invasive procedure.

Re-mini AVR is a safe and feasible procedure. It limits the amount of mediastinal dissection hence less trauma to the patients. It also avoids dissection of LIMA graft and prevents injury to this critical bypass vessel. Benefits of this procedure over conventional full re-AVR include longer survival, less mortality, less blood loss and transfusion, shorter ventilation, less reoperation bleeding and shorter hospital stay, although no randomized control study has been performed to confirm these. This procedure may be particularly useful in high risk patients such as elderly to reduce morbidity and possibly increase their survival.