Minimal access coronary surgery remains a significant niche for various reasons. Non-sternotomy approaches are preferred for redo coronary bypass operations in the management of regional ischemia (1-5). Many patients have a cosmetic preference for a submammary incision as opposed to sternotomy. Patients often have a perception of a lesser procedure when minimal access is used. The results of minimal access surgery in institutions with experience have been excellent (6). There are several conduits that have been successfully used in minimal access coronary surgery (7,8), but the left internal mammary artery (LIMA) remains the gold standard for all coronary surgery (9). This review will focus on the available methods for minimal access harvest of the LIMA in patients undergoing minimally invasive direct coronary artery bypass grafting (MIDCAB).

There are several characteristics that need to be considered when deciding on the best option for mammary takedown. The length of the mammary artery is important particularly for distal lesions and when a significant portion of the left anterior descending (LAD) artery is intra-myocardial. The difficulty of the procedure is important particularly as it pertains to the learning curve. Additionally, when operating with minimal access, it is difficult to repair any damage to the LIMA. Patients also focus on pain and cosmesis. The size and location of the incisions and the manipulation within the intercostal space therefore need to be carefully considered. Finally, from an institutional stand point, cost including the need for expensive capital and disposable equipment is a major consideration. Based on these considerations, we will evaluate the three major options available today namely the standard open MIDCAB, the robotically assisted MIDCAB, and the thoracoscopic LIMA harvest.

The patient is positioned supine with the left side raised up with a large roll placed longitudinally under the patient. One lung ventilation is ideal but the procedure can easily be done by lowering the tidal volume and packing the left lung away from the field. A left submammary incision centered over the mid-clavicular line is used to enter the chest through the 5th intercostal space (Figure 1). Other authors have used a 4th space incision (16). It should be noted however that the mammary harvest can only proceed from the incision cephalad since the chest wall caudal to the incision cannot be visualized. It is therefore our preference to start the harvest in a lower space and obtain the additional length. 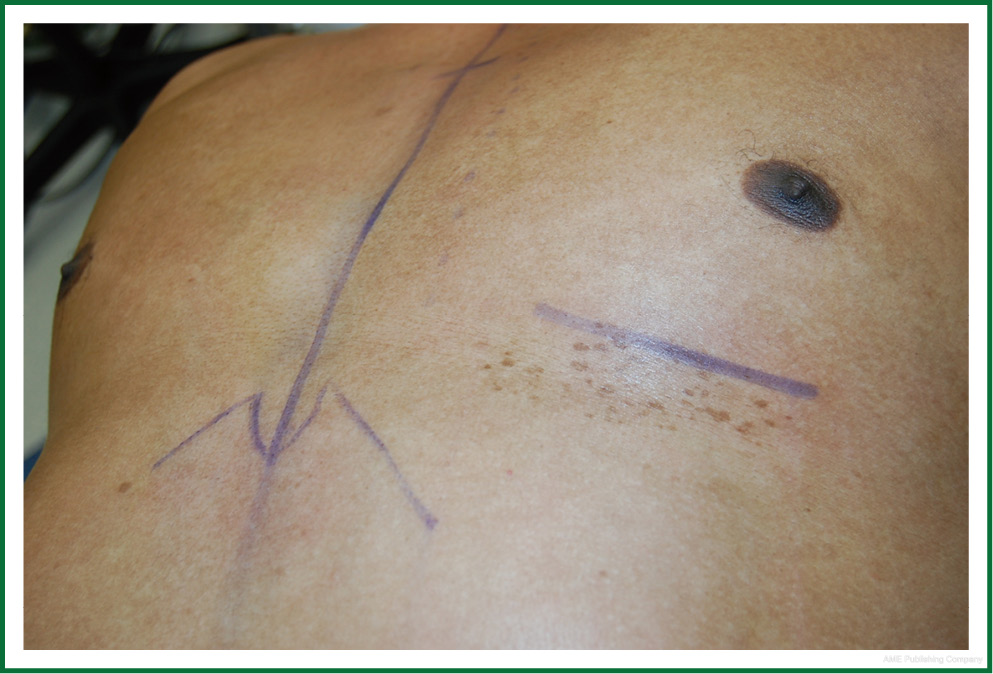 In general, retractors used for LIMA harvest have two blades with the inferior one being similar to a standard chest retractor and the superior blade being elongated to allow rib separation without the superior ribs forming a shelf that limits visualization of the LIMA. Once the retractor is positioned, the pleural fat is carefully dissected away to expose the endothoracic fascia that covers the LIMA. With direct vision using a headlight, the fascia overlying the LIMA is scored with electrocautery and the LIMA is taken down using a skeletonized technique. Often it is easiest to locate the LIMA in the medial portion of the incision and it can then be followed cephalad. The LIMA is harvested all the way to the level of the subclavian vein.

The thoracoscopic approach to mammary takedown has been widely reported starting in 1994 (11,17). The largest series is from Vassiliades and coworkers who reported a 96% patency rate of LIMA LAD anastomosis in their series of 607 patients (18).

The patient is positioned for a MIDCAB. One lung ventilation is mandatory but the operation can be accomplished with standard non-disposable thoracoscopic instruments. Three ports are placed in the left mid axillary line in the 3rd, 5th, and 7th spaces respectively. A 5 or 10 mm 30 degree thoracoscope is placed through the 5th space while a grasper is placed through the 3rd space and the electrocautery is introduced via the 7th space. The endothoracic fascia is exposed carefully by dissecting away the pleural fat. Once the LIMA is visualized, the fascia is incised about a centimeter away and parallel to it. With downward traction on the fascia, the electrocautery is applied to the chest wall thereby freeing up the mammary artery in a pedicled fashion. The mammary branches are cauterized not clipped. The entire length of the mammary artery starting superiorly at the level of the subclavian vein and down inferiorly to the level of the xyphoid process is harvested. The anastomosis to the LAD is performed through a separate small submammary incision guided by the thoracoscope. One of the port sites is used to place an endostabilizer and later the chest tube while the other port sites are closed.

Endoscopic mammary takedown using the daVinci robot (Intuitive Surgical, Sunnyvale, CA) was first described by Loulmet and colleagues in 1999 (19) and has since been widely reported (20). Srivastava and colleagues (21) and Balkhy and colleagues (22) have reported large experiences with good results.

The patient is positioned for a MIDCAB. One lung ventilation is essential and the chest cavity is insufflated with carbon dioxide to create additional space. The camera port is placed about 3 cm lateral to the mid-clavicular line usually in the 4th or 5th space and two other ports are placed two spaces above and below this first port. Once the endothoracic fascia is exposed, the LIMA is taken down using a skeletonized technique. Care is taken not to place too much traction on the LIMA. Side branches are clipped and cauterized. The entire length of the mammary artery is mobilized. If required, both mammary arteries can be harvested. The anastomosis is performed through a separate incision guided by robotic visualization of the LAD. One of the ports is used for the endostabilizer and later for the chest tube. The other ports are closed.

A summary of the comparative characteristics of these techniques is given in Table 1. The standard open MIDCAB is a low cost option that requires little special equipment but is difficult to teach and can be technically challenging. The major issues include obtaining an adequate length of a mammary artery and the exposure for the takedown particularly in obese and large breasted individuals (23). Starting the mammary harvest in a lower space, using a skeletonized technique and harvesting all the way to the subclavian vein can ameliorate the issue of length. If the proximal LAD needs to be bypassed, a counter incision in a higher space through the same skin incision can be used. Pain is a major issue for the first few days because of the amount of intercostal retraction required. Epidural analgesia may be useful in the perioperative period. The cosmetic results are reasonable since the incision is placed in the submammary crease but skin necrosis can occur particularly in obese individuals. 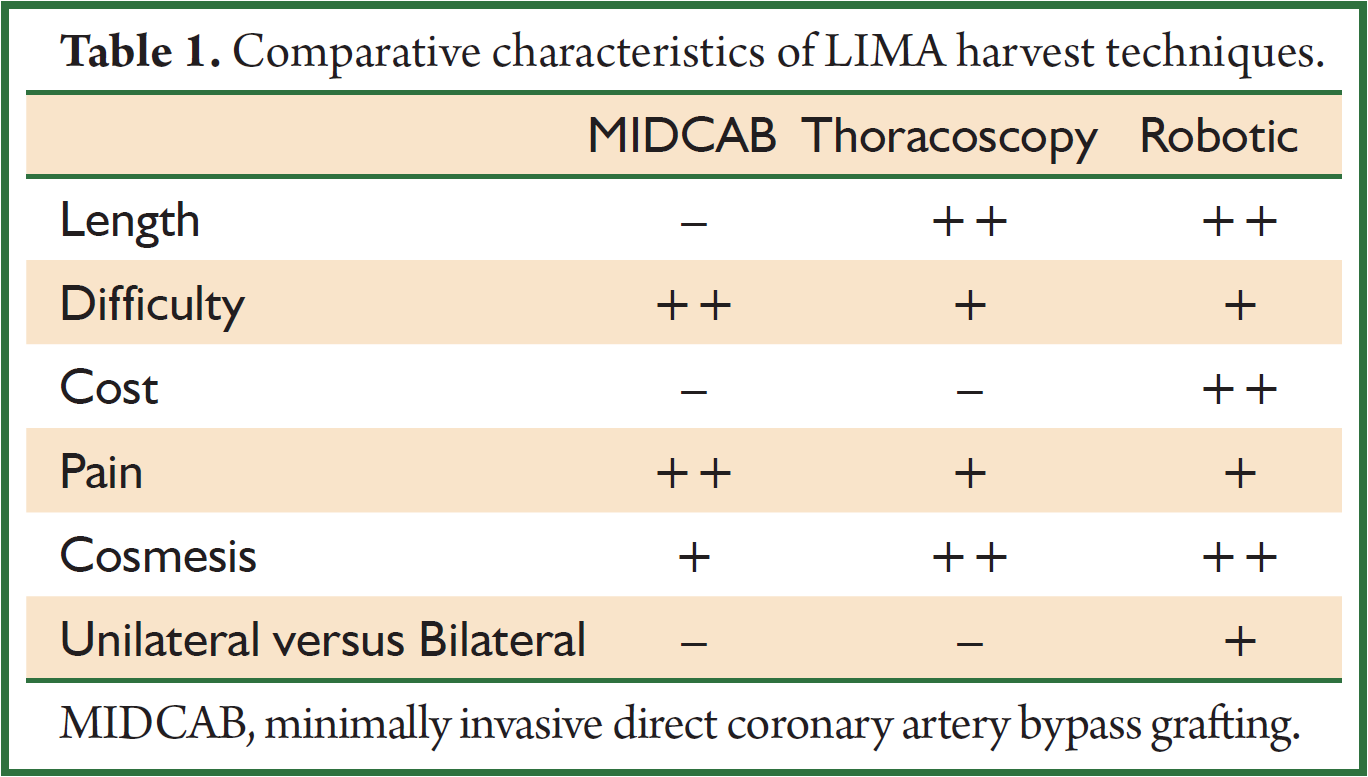 Thoracoscopic mammary takedown can be accomplished with little additional equipment in institutions that already perform thoracoscopy. It does require experience with thoracoscopy and the ability to work with long instruments. The visual feedback with modern thoracoscopes is good but the depth perception may be lacking and needs to be supplemented with tactile feedback. The cosmetic appearance is excellent but pain is dependent on the amount of maneuvering required in the intercostal spaces. Epidural analgesia is not commonly used but may be required. Bilateral mammary takedown is not feasible but the entire length of the LIMA can be harvested.

Mammary harvest with the robot is an elegant technique and has been proven to be safe in most institutions. However it requires an extensive setup with increased costs for the robot, and for disposable instruments. There is a significant setup time in the operating room. The entire length of the LIMA can be harvested and both mammary arteries can be taken down from the same ports. The cosmetic results are excellent and the pain is similar to the thoracoscopic approach though the EndoWrist reduces need for intercostal manipulation. There is a significant learning curve but extensive thoracoscopic experience is not required.

In summary, while all three techniques are feasible and well described, the choice of technique should be individualized to the surgeon, the institution and the patient. The standard MIDCAB remains the most accessible technique and the robotic takedown the most elegant. The thoracoscopic approach may be the most versatile combining the advantages of both techniques. However it is best practiced by surgeons with extensive thoracoscopic experience.