After institutional review board approval from Uijeongbu St. Mary’s Hospital (UC17RESI0116) had been obtained, a retrospective review was conducted of all consecutive patients with PSP under 40 years of age who had undergone outpatient observation (room air group) or had received oxygen therapy (O2 group) between March 2005 and February 2016. Informed consent was waived according to the institutional review board standards.

The criteria assigned to the group could not be strictly applied because this was a retrospective study. Most of the cases were decided by the physician who examined the chest posteroanterior (PA) radiograph; however, some cases were observed in the outpatient clinic because the patient refused admission.

Physical activity was not strictly limited for patients in the room air group. Patients were advised to avoid strenuous exercise, such as playing soccer or basketball, but were permitted mild activities of everyday life, such as class participation. In the O2 group, continuous oxygen was administered via a nasal cannula at 2–4 L/min, and bed rest was recommended on admission.

The initial chest PA radiograph was compared with the last chest PA radiograph taken when the pneumothorax was not completely absorbed. The chest radiographs were reviewed independently by two researchers. The size of the pneumothorax was measured using the Collins’ method (9). The formula requires measurements of the interpleural distance at the apex (A) and to the lateral wall at the midpoint of the upper and lower halves of the collapsed lung (B and C) (Figure 1). Estimated pneumothorax size (%) = 4.2+4.7× (A + B + C). The time at which the radiograph was taken was entered in Microsoft Excel 2010 to the minute. The time interval (days) between two radiographs was automatically calculated using Microsoft Excel 2010. The resolution rate was calculated as resolution rate (%/day) = [initial size (%) − last size (%)]/time interval (days). Descriptive data were expressed as frequencies and means ± standard deviation. Frequencies were compared using the χ2 test or Fisher’s exact test for categorical variables; continuous variables were compared using the independent two-sample t-test or Mann-Whitney U test. 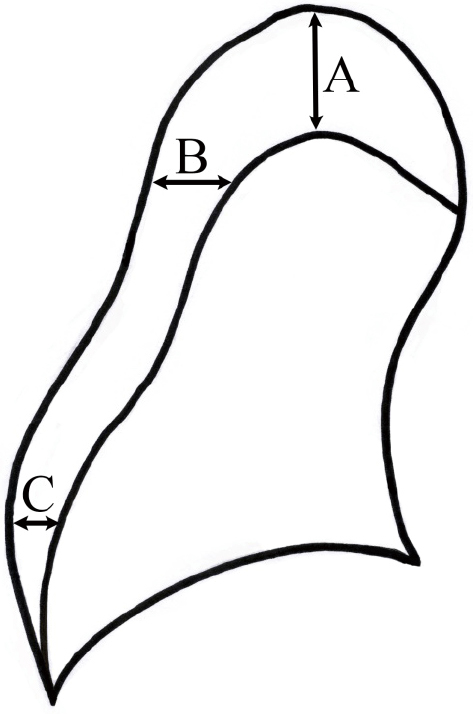 Our study suggested that the resolution rate of PSP was related to initial pneumothorax size, the time interval between radiographs, and oxygen therapy.

In 1954, Kircher et al. suggested that the resolution rate of pneumothorax was 1.25%/day in room air (12). The authors used a method to indirectly compare lung areas by plotting virtual rectangles in calculating pneumothorax size (Figure 2). Two later clinical studies suggested that the resolution rate was increased three or four times by oxygen therapy (5,6). These two studies had the following limitations. First, the studies had only 6 and 10 participants. Second, most patients were older, with secondary pneumothorax. Third, the more recent study was published in 1983. The measurement method was the same as Kircher’s method, which is rarely used at present (Figure 2). 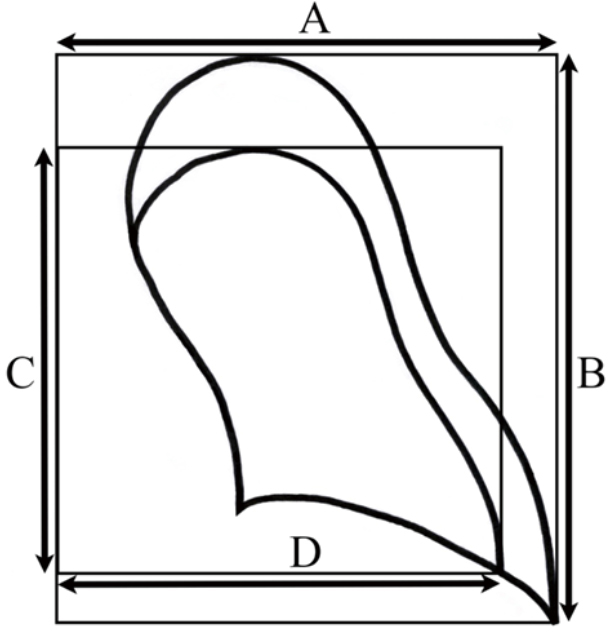 Pneumothorax size is a very important determinant of therapy (13,14). However, the accuracies of the commonly used methods of estimating pneumothorax size, such as the Rhea’s method, light index method, and Collins’ method, have not yet been clearly validated. Our study was conducted using Collins’ method, which is a helical computed tomography (CT)-derived formula using interpleural distance on an erect chest PA radiograph to estimate pneumothorax size (9). This method can predict the three-dimensional volume of a pneumothorax through the two-dimensional area on chest PA radiography.

Current studies of the clinical use of hyperoxic management have found various adverse outcomes (16). Oxygen supplementation induces the release of reactive oxygen species, which inhibit the generation of vasodilators such as prostaglandins and nitric oxide. Vasoconstriction caused by hyperoxia decreases perfusion, and regional oxygen delivery is decreased. The tracheobronchial tree is exposed to the highest oxygen partial pressure, and the airway lining fluid has high antioxidant activity. Continued exposure to hyperoxia can lead to chest pain, cough, headache, visual disturbances, and convulsions (17). To avoid these adverse effects, careful administration of oxygen is recommended.

The adverse effects of oxygen therapy in patients with PSP have not been previously investigated. Our study demonstrated the effect of oxygen therapy in the resolution of PSP. The resolution rate was (4.27%±1.97%)/day in the O2 group vs. (2.06%±0.97%)/day in the room air group (Table 1). Although the difference between these rates is statistically significant, its clinical usefulness is uncertain for the following reasons. First, the absolute difference in resolution rate is not great. Second, PSP is also resolved in room air. Third, oxygen therapy has potential adverse effects. Fourth, patients with small pneumothoraces usually maintain adequate oxygenation without oxygen therapy.

Our study has the following limitations. First, the initial pneumothorax size and the interval between radiographs were significantly different between the two groups. These variables are significantly related to the resolution rate. Second, it is difficult to clarify the effect of differences of physical activity during treatment between the two groups. Third, we could not investigate adverse effects associated with oxygen therapy. Well-controlled prospective studies are required to investigate the effectiveness of oxygen therapy for PSP.

The resolution rate of PSP was increased with oxygen supplementation. However, taking into consideration current concerns about adverse outcomes of hyperoxia, the routine use of oxygen therapy in patients with small pneumothoraces should be considered carefully.

Conflicts of Interest: Presented at the 25th European Conference on General Thoracic Surgery of the European Society of Thoracic Surgeons, Innsbruck, Austria, 28–31 May 2017.