Atrial septal defect (ASD) is the most prevalent type of congenital heart disease and one of the most commonly recognized congenital cardiac anomalies that present in adulthood. It is characterized by a defect at the atrial level that allows pulmonary venous return to directly enter the right atrium. ASDs are classified into four types: ostium secundum (75% of cases), ostium primum (15–20% of cases), and sinus venosus (5–10% of cases) and, less commonly, an unroofed coronary sinus (1). The overall prevalence of ASD has been estimated to be 0.85 per 1,000 adults, which is likely an underestimate considering that some patients remain clinically asymptomatic, with a normal life expectancy (2). From a physiological perspective, the left-to-right shunt between systemic and pulmonary circulations leads to right ventricular (RV) volume overload with excessive pulmonary blood flow. Consequently, sequelae and complications include exercise intolerance, pulmonary vascular disease, RV dysfunction, paradoxical thromboemboli, and atrial arrhythmias (3-5).

Pregnancy in women with ASDs is generally well tolerated and considered to be at low risk for maternal and fetal morbidity and mortality (6,7). Nevertheless, hemodynamic and hemostatic changes throughout gestation may unmask previously unrecognized heart disease during pregnancy and increase the risk for maternal, fetal and obstetrical complications. This review focuses on issues related to pregnancy in women with repaired and unrepaired ASDs (Table 1).

Several hemodynamic changes during a normal pregnancy contribute to the overall increase in cardiac workload (8-10). The two predominant changes consist of a reduction in vascular resistance and an increase in cardiac output. Hormonal alterations in early pregnancy lead to a reduction in both systemic and pulmonary vascular resistance, accompanied by a decrease in blood pressure by 5–10 mmHg in the first 2 trimesters. From the onset of pregnancy until the end of the second trimester, plasma volume increases progressively by up to 50% and is associated with a 20–30% rise in the red blood cell volume, resulting in relative anemia. Additionally, the increase in plasma volume initially contributes to a higher cardiac output, which peaks between 28 and 30 weeks of gestation. At this point, cardiac output may be 30–50% higher than the baseline pre-pregnancy value. The increase in cardiac output is driven by an initial increase in stroke volume and a heart rate that accelerates 10–20 bpm in the second trimester. Overall, oxygen consumption increases by 30% during a normal pregnancy.

During delivery, stroke volume increases by 300–500 mL with each contraction, which combined with pain-induced heart rate spikes, can result in an 80% increase in cardiac output when compared to pre-pregnancy values. Furthermore, blood loss differs according to mode of delivery and is less pronounced with vaginal births (~500 mL) compared to caesarean sections (~1,000 mL). Hemodynamic parameters gradually return to normal during a 4–6-week postpartum period (Figure 1) (11). 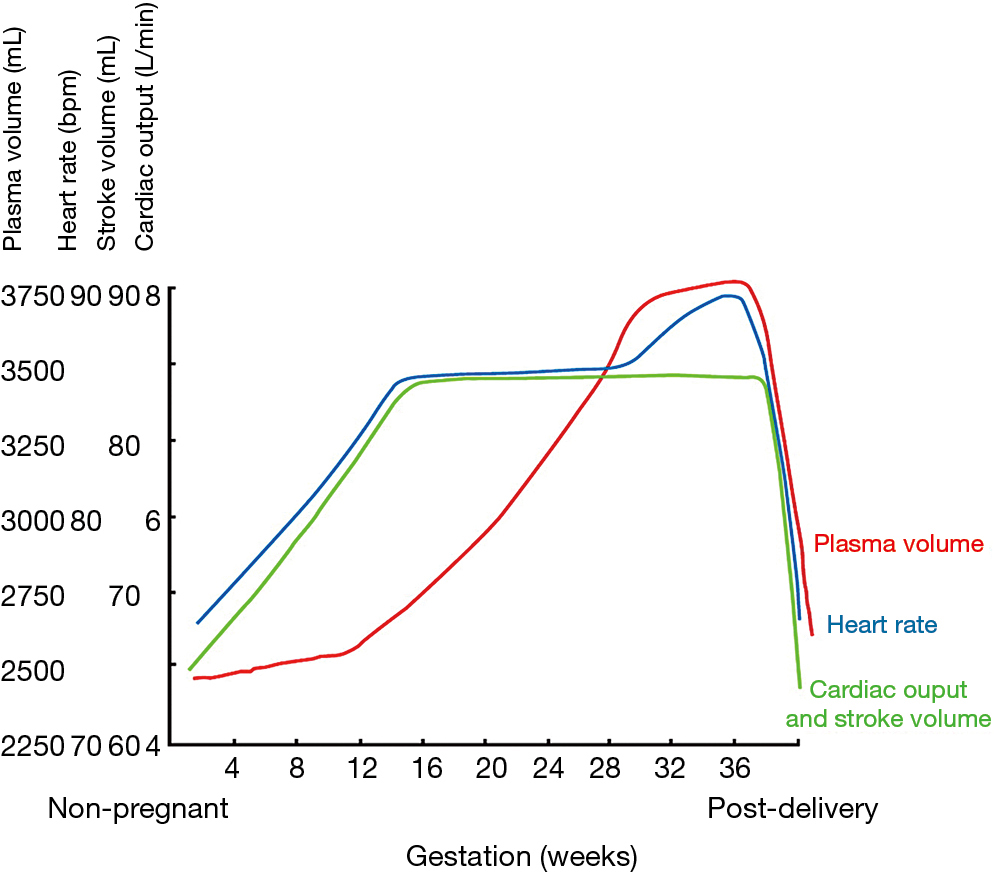 Normal pregnancy is also accompanied by changes to coagulation and fibrinolytic systems. These include increases in a number of clotting factors (e.g., VII, VIII, IX, X, XII and von Willebrand factor), fibrinogen and platelet activation, a reduction in protein S and inhibition of fibrinolysis. The latter is mediated by an increase in plasminogen activator inhibitor-1 and inhibitors of plasmin formation (e.g., α2 anti-plasmin and α2 macroglobulin). These changes underlie the hypercoagulable state associated with pregnancy, along with the increased risk for thromboemboli (12). Thromboembolic risk increases 5-fold in the third trimester, peaks in the early postpartum period, and remains elevated up to 6 weeks after delivery (13).

In patients with unrepaired ASDs, these pregnancy-induced physiological changes can aggravate RV volume overload, with the potential to trigger heart failure and contribute to atrial dilation and the genesis of atrial arrhythmias (i.e., atrial fibrillation and flutter). The reduction in systemic vascular resistance can favor transient pulmonary hypertension, with potential for shunt reversal, especially in the setting of pre-existing elevated pulmonary arterial pressures. This can result in a reduction in oxygenated blood in maternal and fetal circulations (14). Moreover, the hypercoagulable state combined with the potential for shunt reversal can increase the risk for paradoxical embolism.

In addition to the risk of stroke related to arrhythmias (15) or incomplete prosthetic device endothelialization following percutaneous closure (16), patients with ASDs are likewise susceptible to paradoxical emboli. Paradoxical embolism is defined as the embolic migration of thrombus into the systemic circulation through a right-to-left shunt. The exact prevalence is unknown in the general ASD population. Paradoxical emboli have been shown to occur in patients with smaller defects and to be associated with deep venous thrombosis (5,17,18). In women without congenital heart disease, coagulation changes combined with venous stasis in the lower extremities contribute to the 1 to 2 per 1,000 risk of venous thromboembolism (13). These observations are consistent with the higher risk of paradoxical embolism observed during pregnancy in patients with unrepaired ASDs, reported to be between 2% and 5% (19,20). Although routine thromboprophylaxis is not recommended during pregnancy in patients with ASDs, clinical suspicion for deep venous thrombosis should incite prompt investigation considering the association with paradoxical emboli.

Atrial fibrillation and flutter are more prevalent in patients with unrepaired ASDs, or those with ASDs closed at an older age, when compared to the general population (15,20). It has been estimated that 10% of patients with unrepaired ASDs develop supraventricular arrhythmias, primarily atrial fibrillation, by 40 years of age (21,22). Adults with repaired ASDs remain at risk for atrial arrhythmias following surgical or percutaneous closure, with a higher risk in those with preceding arrhythmias (23-27). Overt symptomatic arrhythmias frequently occur during pregnancy in women with ASDs. Indeed, arrhythmias may be aggravated by the volume overload state associated with pregnancy, with its attendant electrophysiological and structural atrial remodelling effects.

In a retrospective study of 188 pregnant women with unrepaired (N=133) or repaired (N=55) ASDs, the most common cardiac complication was arrhythmia deemed to be of clinical significance, with an incidence of 4.3% (28). These included episodes of atrial fibrillation, sustained supraventricular tachycardia with syncope, and bouts of non-sustained ventricular tachycardia. No differences in arrhythmic complications were observed according to whether the ASD was repaired or unrepaired. However, in this particular study population, ASD repair was performed at a mean age of 26 years, with 14% and 18% of women with unrepaired and repaired ASDs, respectively, having had prior arrhythmias (28).

Evidence is scarce regarding the safety and efficacy of anti-arrhythmic and rate-slowing drugs during pregnancy. Challenges include achieving and maintaining stable drug levels in the context of hemodynamic, gastrointestinal, and metabolic changes. Two agents are considered relatively contraindicated, i.e., amiodarone and atenolol (29). Amiodarone has been associated with complications such as fetal hypothyroidism, goiter, premature birth, and a prolonged QT interval. Atenolol has been linked to fetal hypoglycemia, growth retardation, and bradycardia. Most other agents including digoxin, metoprolol, bisoprolol, propranolol, verapamil, diltiazem, adenosine, procainamide, quinidine, and flecainide have been insufficiently studied in humans but may be of benefit in selected patients despite potential risks and animal reproduction studies suggesting the possibility of adverse fetal effects. Animal studies have failed to demonstrate fetal risks associated with sotalol and lidocaine, although bradycardia can occur with either agent. In the event that arrhythmia is associated with hemodynamic instability, prompt electrical cardioversion should be considered (6,30). In women with ASDs and documented arrhythmias that are amenable to catheter ablation, procedures should ideally be performed prior to pregnancy. Under exceptional circumstances involving pregnant women with recurrent, refractory, and/or poorly tolerated supraventricular arrhythmias, catheter ablation with minimal or no fluoroscopy may be considered after carefully weighing potential risks and benefits (31).

Unless corrected in childhood, all forms of congenital heart disease in which a left-to-right shunt allows unrestricted volume and pressure overload to the pulmonary circulation can lead to pulmonary arterial hypertension. In comparison to patients with closed defects, those with unrepaired ASDs have a higher prevalence of increased pulmonary arterial pressures (35% vs. 13%), RV dysfunction (31% vs. 8%) and RV volume overload (18% vs. 1%) (32). These hemodynamic changes impair exercise capacity, even in patients considered asymptomatic, with exertional dyspnea noted in approximately 30% by the third decade of life (33-37). Pulmonary arterial hypertension is considered a late complication of an uncorrected ASD and uncommonly occurs before the age of 40. The prevalence has been estimated to be 10–35% in adults with secundum ASDs (38-40). However, the spectrum of pulmonary vascular disease is wide. Some adults with ASDs have only mild pulmonary vascular disease despite large shunts, whereas others develop severe irreversible pulmonary vascular disease, shunt reversal and chronic cyanosis (i.e., Eisenmenger syndrome) (4,41-44).

During pregnancy, the reduction in systemic vascular resistance associated with increased cardiac output can worsen right-to-left shunting and hypoxia. This may provoke pulmonary vasoconstriction and lead to refractory right heart failure. The impaired ability to adapt to vascular changes further contributes to poor maternal and fetal outcomes when pulmonary hypertension is present in women with congenital heart disease. In the late 1990s, studies reported maternal and fetal mortality rates up to 50% and 60%, respectively (45). More recent studies suggest that these rates are far lower (i.e., 5% and 2–13%, respectively), although maternal and fetal morbidity remain high (i.e., 30–50% and 20–40%, respectively) (46-48). Moreover, the incidence of premature delivery is also increased in this population. Thus, based on such reports, patients with ASD and pulmonary hypertension should be counselled against pregnancy (6).

Infective endocarditis is a rare complication following ASD closure (49-51). It has been described up to 7 years after the procedure. Incomplete prosthetic device endothelialization has been proposed to explain late infections after percutaneous ASD closure. Currently, endocarditis prophylaxis is recommended for 6 months after patch or device closure if there is no evidence of a residual shunt (52,53). To our knowledge, only one case of endocarditis has specifically been described in a pregnant woman with an ASD, although the details surrounding the case are unclear, including site of infection, putative infectious agent, and associated abnormalities (19). Antibiotic prophylaxis is not recommended during delivery.

Obstetrical and fetal outcomes in repaired and unrepaired ASD

Closure of an ASD is rarely required during pregnancy. Transcatheter closure of an ostium secundum ASD may be considered in pregnant women with cyanosis because of right-to-left shunting and poor fetal growth. However, this should not be performed in the context of an elevated pulmonary vascular resistance. Small case series have reported percutaneous ASD closure during pregnancy with good maternal and fetal outcomes (54-56). In these studies, indications for closure were heart failure with non-severe pulmonary hypertension, worsening functional class and recurrent stroke. Radiation exposure to the mother and fetus is a critical safety issue. To minimize risks to the developing fetus, when indicated, percutaneous ASD closure should be performed during the 2nd trimester under echocardiographic guidance with as little fluoroscopy exposure as possible (57). Transcatheter ASD closure under transesophageal echocardiographic guidance without fluoroscopy has been reported (58). Transthoracic or intracardiac echocardiographic guidance may be considered as alternative imaging modalities to avoid risks related to general anaesthesia. The rare case of surgical ASD closure during pregnancy has also been described. Cardiopulmonary bypass during pregnancy does not generally increase maternal mortality risk but is associated with an up to 10–15% fetal mortality risk. Indeed, continuous flow and hypothermia may lead to uterine contractions and a reduction in placental flow (59,60). Therefore, surgical ASD closure should be avoided during pregnancy and delayed until after delivery whenever possible.

Risk of congenital heart disease recurrence in the offspring

While most ASDs occur sporadically and are isolated, they may be associated with genetic mutations (TBX5, GATA4 and NKX2.5) (61,62). In the absence of a maternal genetic syndrome associated with the ASD, the incidence of congenital heart disease in the offspring is 2–4%, which is higher than the 0.6–0.8% baseline incidence in the general population (19).

Pregnancy in women with ASDs is generally well tolerated, with good maternal and fetal outcomes. Arrhythmias are the most common cardiac complication and occur in <5% of pregnant women. Nevertheless, an unrepaired ASD is associated with a higher risk of maternal and neonatal events. Although there is no definitive evidence demonstrating superiority, ASD closure may be considered prior to pregnancy. It is common in current practice to electively close asymptomatic but large and/or hemodynamically significant ASDs prior to childbearing years. Pregnancy remains contraindicated in patients with ASDs associated with severe pulmonary hypertension due to poor maternal and fetal outcomes. Cardiology follow up during pregnancy should be adapted to clinical symptoms.

Dr. P Khairy is supported by a research chair in electrophysiology and congenital heart disease.