Surveillance imaging for follow-up of patients with advanced stage non-small cell lung cancer during remission is endorsed by prominent oncologic societies due to the high rate of recurrence and clear benefits of second-line therapy in patients with an initial response to first-line chemotherapy (1). Cancer patients with new pulmonary findings on surveillance imaging present a diagnostic dilemma and often require tissue acquisition to differentiate between infectious versus neoplastic etiologies, among others, in order to determine the appropriate treatment course. Herein, we describe a case of newly appearing multiple pulmonary nodules representing pulmonary Langerhans cell histiocytosis (PLCH) in a female patient with an established synchronous diagnosis of metastatic adenocarcinoma of the lung. Written informed consent was obtained from the patient for publication of this case report and any accompanying images.

A 56-year-old female patient presented in November 2015 for evaluation of expanding upper lobe-predominant nodular lung opacities, observed on computed tomography (CT) imaging. Approximately one year prior to her presentation, she was diagnosed with multifocal adenocarcinoma of the lung metastatic to mediastinal lymph nodes, left adrenal gland, and pleura. The tumor was negative for epidermal growth factor receptor (EGFR) mutation, anaplastic lymphoma kinase (ALK) translocation, and ROS proto-oncogene 1 translocation, but positive for B-Raf proto-oncogene V600E (BRAFV600E) mutation. The patient was a cigarette smoker with 55-pack year history and she admitted significant increase in her smoking habit from one to two packs per day after learning about her diagnosis with cancer. She completed six cycles of chemotherapy with carboplatin and pemetrexed as well as radiation therapy to the main lesion in the right lung and her condition was considered stable, allowing for a “chemotherapy holiday”. Surveillance CT imaging obtained in May 2015 revealed new ill-defined ground glass lung nodules in a bilateral upper lobe distribution. Since the patient was asymptomatic at that time, a mutual decision was made to pursue watchful waiting. Follow-up imaging obtained in September and November demonstrated an increase in number of the nodules, some of which developed a central lucency. The primary tumor and mediastinal lymph nodes remained stable in appearance (Figure 1). The patient remained in her usual state of health and without new constitutional or respiratory symptoms. A comprehensive review of systems was negative. Vital signs were within normal limits and physical examination was unrevealing. However, at this point the patient requested to pursue work-up by an approach that will maximize the diagnostic yield.

She was referred for a video-assisted thoracoscopic lung biopsy. Examination of a wedge biopsy of the right upper lobe revealed areas of previously known adenocarcinoma (Figure 2) as well as cystic changes and nodular proliferation of mixed inflammatory cells including numerous eosinophils and histiocytes in a stellate configuration around the airways accompanied by areas of respiratory bronchiolitis and interstitial fibrosis. The histiocytes showed abundant eosinophilic cytoplasm and grooved nuclei, and displayed characteristic reactivity for S100 protein and CD1a antigen (Figure 3), confirming the diagnosis of PLCH. Stains and tissue cultures for microorganisms were negative. Pyrosequencing of a PLCH nodule was negative for the BRAFV600E mutation. Examination of a right middle lobe wedge biopsy revealed additional areas involved with adenocarcinoma, but not with PLCH. The patient was reassured as for the non-malignant nature of the new lesions and educated regarding complete smoking cessation as an essential component of treatment of both her malignancy and PLCH. Unfortunately, further information about the state of her disease or condition is unknown as she has elected to continue follow-up with an alternative healthcare provider. 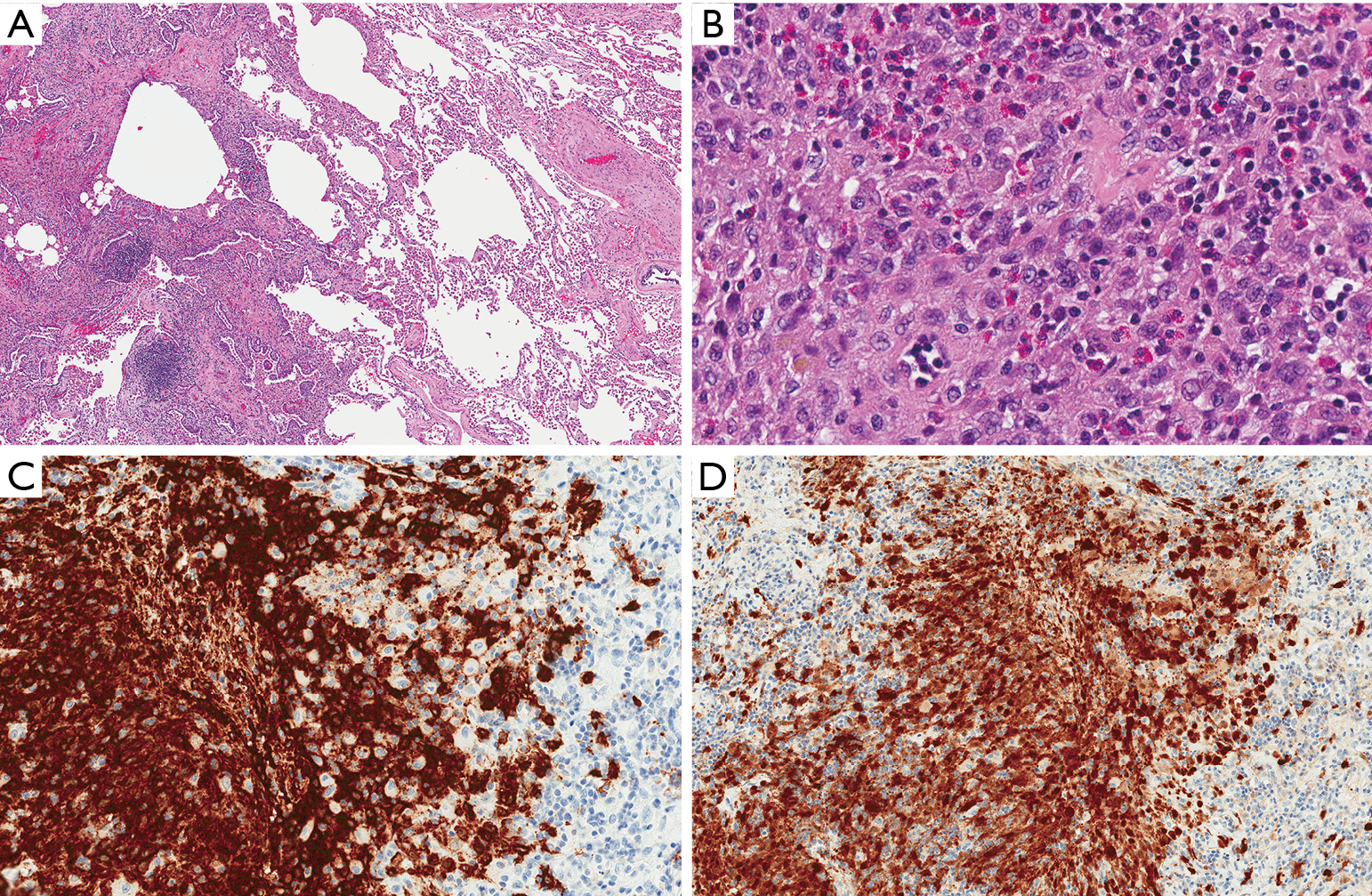 PLCH is a rare interstitial lung disease of unknown pathogenesis affecting primarily young adults and strongly associated with cigarette smoking. Radiologically, the disease classically involves the mid-upper lung zones, supporting an inhalational mechanism of injury. CT findings include ill-defined reticular and nodular bronchiolocentric opacities, which often assume a stellate appearance. Over time, those nodules tend to cavitate and coalesce assuming a cystic appearance and may eventually be replaced by fibrous tissue. Pathologically, the stellate nodules correspond with large clusters of S100 protein- and CD1a antigen-positive histiocytes as well as a mixed infiltrate of eosinophils, lymphocytes, plasma cells, and/or neutrophils (2).

Langerhans cells (LC) can often be demonstrated in lesions of lung neoplasia, most frequently adenocarcinoma, but were shown to be immunophenotypically different and less effective in T-cell activation when compared with LC obtained from PLCH lesions (3). Co-occurrence of PLCH and lung cancer is exceedingly rare. In a natural history series of 314 PLCH patients from Mayo Clinic, only 5 had PLCH and concurrent lung cancer, of which 4 were adenocarcinoma and one was small cell carcinoma (4). Associations between PLCH and bronchogenic, large cell, and squamous cell carcinomas have also been reported (5,6). While in many cases PLCH precedes the appearance of cancer and may represent a risk factor for the development of lung neoplasia, it can also appear after a diagnosis of lung cancer has been established, as seen in our case. Hence, it was proposed that PLCH may represent a local reaction of LC in the lung to the tumor (7).

Although generally regarded as a polyclonal non-neoplastic process, a subset of PLCH patients with monoclonal disease has been described. Among several genetic mutations associated with clonal PLCH, the BRAFV600E activating mutation is the most established (8). The BRAF protein coordinates cellular responses involved in cell cycle regulation and cell proliferation, differentiation, survival, and apoptosis. Hence, activating mutations in the BRAF gene have the potential to contribute to clonal cell expansion (9). Indeed, treatment of advanced PLCH with the BRAF inhibitor, vemurafenib, was reported to have resulted in a favorable outcome (10). Interestingly, the same mutation is also observed in 1–3% of non-small cell lung cancer cases, predominantly adenocarcinoma (11). This association, however, was not observed in our patient, whose adenocarcinoma was positive while her PLCH lesions were negative for BRAFV600E, lending support to the assumption that her PLCH represents a separate smoking-related disease process.

Both BRAFV600E-positive lung adenocarcinoma and PLCH occur almost exclusively in smokers (12,13). Although PLCH pathogenesis is poorly understood, it is hypothesized that constituents of cigarette smoke promote cytokine production, specifically granulocyte-monocyte colony stimulating factor (GM-CSF) and tumor growth factor β (TGF-β), by airway epithelial and other airway associated cells. While GM-CSF can facilitate the activation of LC (14), TGF-β promotes local expansion of LC and contributes to tissue remodeling as seen in PLCH (15). Interestingly, both of these cytokines have also been shown to be produced in large quantities by human adenocarcinoma cell lines (16).

Management of patients with PLCH involves primarily smoking cessation. Immunosuppressive therapy, such as glucocorticoids and cytotoxic agents, are reserved for symptomatic subjects not responding to smoking cessation, although no firm data regarding efficacy exits. Lung transplantation may be considered in advanced cases not responsive to medical measures, although recurrence in the transplanted lung can occur.

To conclude, this rare case illustrates the complexity of our expanding knowledge regarding the genetic foundations and the role of different immunologic pathways in both benign and malignant conditions. The finding that in our patient the PLCH lesions were negative for the BRAFV600E mutation, lends support to the theory maintaining that PLCH may have been a result of intensification of tobacco use, possibly facilitated by cytokines produced by the lung adenocarcinoma. This case underscores the need to emphasize complete smoking cessation in order to prevent, or at least reduce the incidence of, all smoking related lung diseases.