Cardiovascular disease (CVD) continues to be the major cause of death worldwide, with dyslipidemia as a well-known primary target and modifiable risk factor (1). Numerous observational studies found that the risk of CVD and mortality is inversely associated with serum levels of HDL-C in several patient populations including those with and without CVD (2). Thus, a consensus has formed over the past few decades that low serum HDL-C levels can serve as a marker of risk for adverse events whereas increasing concentrations of HDL can be considered protective. In addition, major efforts were undertaken to devise strategies aimed at increasing serum HDL-C concentrations as a means for reducing CVD and thereby overall mortality. However, several large randomized clinical trials using pharmacologic agents such as niacin and cholesterol ester transfer protein (CETP) inhibitors to increase serum HDL-C levels were not proven to be effective in reducing the risk of mortality (3-5). A series of recent investigations have indicated that there are certain instances where elevated levels of serum HDL-C are not only not associated with improved outcomes, but paradoxically increased risk of CV and all-cause mortality. These include patients with inflammation, polymorphisms in certain genes (such as CETP, lipoprotein lipase, hepatic lipase and scavenger receptor B-I), end stage renal disease (ESRD), diabetes, and coronary artery disease (6-13).

These discoveries together with preclinical studies examining the mechanisms by which HDL mediates its cardiac and overall protective effects have shed light on clinical scenarios and conditions which can render HDL dysfunctional. However, the overarching belief has been that outside of some particular conditions, which are marked by inflammation, the HDL particle plays a protective role in the most patient populations and increasing serum HDL-C levels are associated with improved CV and overall outcomes. However, there is now emerging evidence that elevated serum HDL-C concentrations can also be associated with worse outcomes in the general population (14,15). In this regard, a recent study by Madsen et al. examined the association of significantly elevated serum HDL-C concentrations with outcomes including mortality in men and women of two separate Danish general population cohorts (the Copenhagen City Heart Study and the Copenhagen General Population Study) (16). While the median serum HDL-C concentrations in this study were reported to be 52 mg/dL for men and 67 mg/dL for women (as expected women had higher levels of HDL-C than men), a small but notable subset of patients had significantly elevated serum levels of this lipoprotein (greater than 97 mg/dL for men and 116 mg/dL for women) which they identified as “extreme high” HDL-C group. In line with previous reports, they found a U-shaped association between serum HDL-C concentrations and all-cause mortality in both men and women, with extremes of high and low HDL-C being associated with a significant increase in the risk of death. While men with HDL-C levels <39 mg/dL had an all-cause mortality hazard ratio of 1.27 (1.12–1.45), those with extreme high levels such as 97–115 and ≥116 mg/dL also had increased hazard ratios of 1.36 and 2.06 when compared with the reference group (58–76 mg/dL). Similar findings were noted in women given that serum HDL-C levels between 116–134 mg/dL and 135 mg/dL were associated with hazard ratios of 1.68 and 1.78, respectively, when compared with the reference group (77–96 mg/dL). These associations remained robust after extensive adjustments for numerous covariates including age, body mass index, current smoking, cumulative tobacco smoking, alcohol consumption, physical activity, systolic blood pressure, diabetes mellitus, lipid-lowering therapy, LDL cholesterol, triglycerides, menopausal status and hormone replacement therapy for women. Additionally, U-shaped associations between HDL-C and cardiovascular mortality were also reported for both men and women in this study.

To account for some of the factors which could have affected the validity of their findings, these investigators also performed extensive sensitivity analyses. For instance, given that the subjects included in the main analyses were combined from two independent studies; they evaluated each study separately and found similar results. They also evaluated the potential role of reverse causation explaining their findings by assessing whether severe disease which can lead to death in the short term and possibly high serum HDL cholesterol levels can account for the results being reported. For this they re-examined the association of all-cause mortality for the extreme high HDL-C group when compared to the reference group while excluding individuals with less than 1 to 5 years of follow-up. Therefore, those with severe disease who may have not been present past one year were removed from their analyses. They found that while there was a slight attenuation of risk for women, the overall hazard ratios remained robust making it less likely that reverse causation could be the underlying cause of their findings. Whereas the authors admit that residual confounding can be a source of bias and a limitation of this observational study, given the evolving literature in this area with converging results, it is essential that the results of these studies are taken seriously and a closer evaluation of the HDL-C as a marker/therapeutic target be undertaken. This is a critical point given that HDL-C cholesterol is used for risk assessment and the commonly held belief that increasing concentrations of serum HDL-C are associated with improved outcomes may not necessarily be true. In addition, the accruing evidence indicating that significantly elevated HDL-C levels are associated with higher risk of death would raise concerns regarding use of serum HDL-C as a target for therapy. The latter notion is supported by the disappointing results of the recent clinical trials using niacin and CETP inhibitors.

While caution should be exercised in drawing conclusions regarding a causal relationship between increased serum HDL-C levels and mortality based on observational studies, these investigations do indicate that the physiologic role of the HDL particle is complex and the currently used system for evaluation of HDL-C is inadequate. Additionally, these findings highlight the clinical need for markers which can predict not only the quantity of HDL cholesterol in the serum but also quality of the HDL particles. In fact, there is a vast volume of literature which indicates that the size of HDL particle, its enrichment with proinflammatory mediators, HDL apolipoprotein content/other constituents and its functional capacity can play a critical role in determining its overall effects and hence its association with clinical outcomes (17) (Figure 1). For instance, it is now becoming clear that aside from its role in reverse cholesterol transport, the normal HDL particle also possesses a number of protective functions including anti-inflammatory, antioxidant, vasomodulatory and antithrombotic properties which can play a key role in its ability to prevent and reverse atherogenesis. 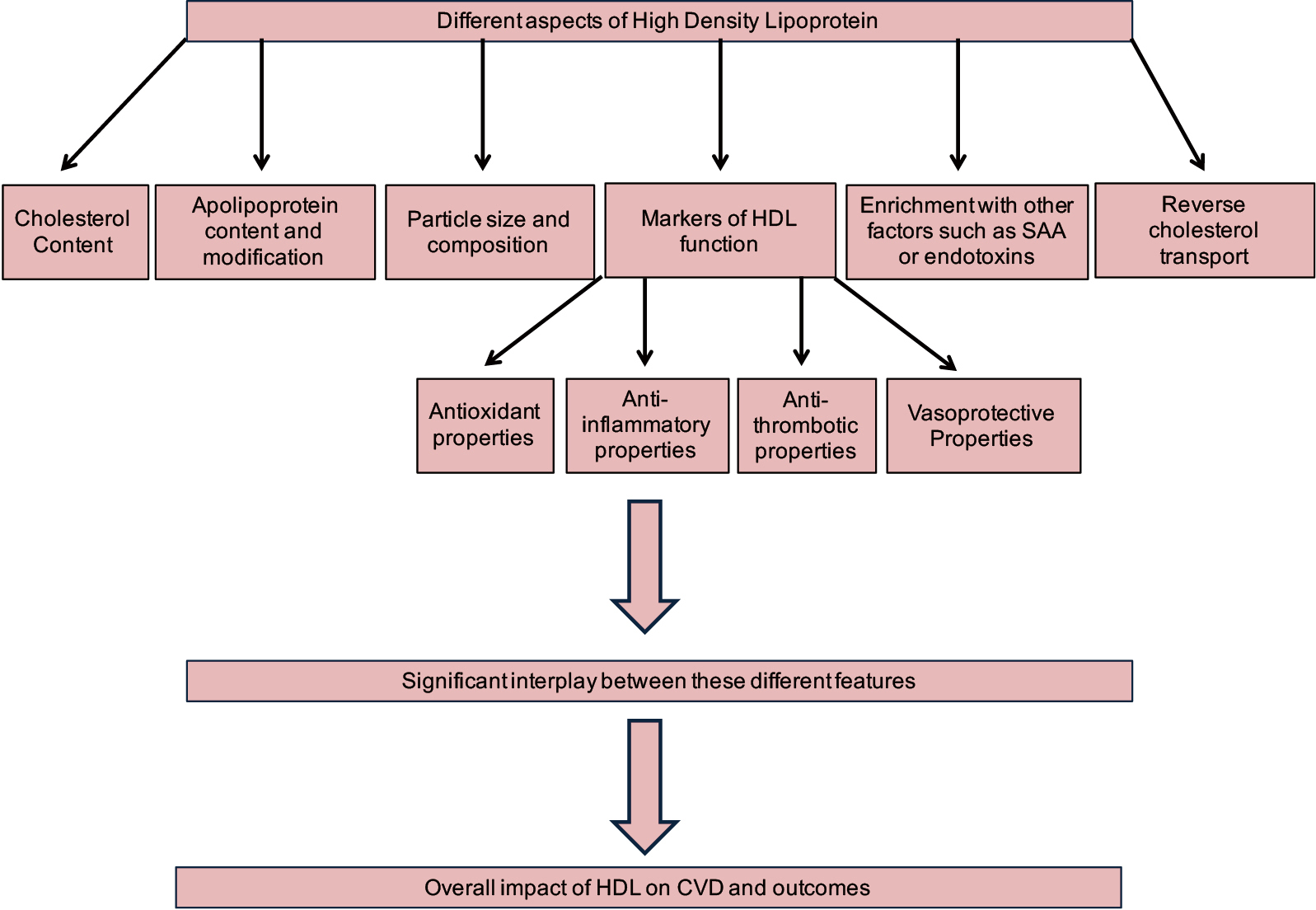 Figure 1 Significant interplay between different features of HDL with one aspect impacting the other which likely determines the overall impact of HDL on CVD and outcomes. SAA, serum amyloid A; HDL, high density lipoprotein; CVD, cardiovascular disease.

There are many conditions in which these markers of HDL function have been documented to be deficient including in patients with ESRD. Furthermore, composition of the HDL particle and its enrichment with pro-inflammatory constituents has been shown to play a crucial role in determining its overall protective properties (18-20). As an example, increased serum amyloid A (SAA) content of HDL in patients with ESRD not only decreased HDL anti-inflammatory properties, it was in fact associated with deleterious HDL proinflammatory activity (21). Therefore, it is no surprise that elevated levels of serum HDL-C levels in patients with ESRD are associated with a higher risk of CV and all-cause mortality (11). Furthermore, it is important to note that measurement of serum concentrations of HDL-C do not provide any information regarding the critical qualitative aspects of HDL which is essential for its overall impact on CVD and thereby outcomes. Therefore, it is possible that extreme high concentrations of HDL-C in the general population may be associated with HDL particles which are dysfunctional or pro-inflammatory hence explaining their association with worse outcomes in these observational studies. In addition, while the HDL functional properties mentioned here are just some examples of the many different complexities involved in evaluation of the HDL particle as a whole, they do provide an insight as to why measurement of serum HDL-C level in the serum only reveals a small part of the entire HDL story. In fact, the translational studies which have evaluated HDL in a variety of conditions such as ESRD indicate that the HDL particle may in fact play a dual role, protective and pathogenic, in CVD and the factors that determine its overall effect are not limited to its serum cholesterol concentrations but also on a range of other features including its composition and function (22). Hence, future investigations need to focus on identifying elements of HDL function which can be measured in a laboratory to complement the serum HDL-C levels.

Furthermore, more comprehensive analyses of HDL particle size, composition and content should be developed to accompany the functional studies thereby providing a thorough assessment of HDL in each individual. Development of these markers will not only improve our ability to identify patients at risk, it will also help guide our therapy given that different aspects of HDL dyslipidemia may require different therapeutic approaches. For instance, a patient with HDL-C deficiency may benefit from a pharmacologic agent that increases HDL cholesterol content, however, this approach may not be helpful in a patient with proinflammatory HDL or HDL dysfunction. Furthermore, the development of a more comprehensive approach to HDL testing will also assist in identifying novel targets for therapy including potential pharmacologic agents which may improve HDL function or alter HDL composition in a therapeutic manner. Finally, using this precision medicine oriented approach will help us personalize management of HDL-related dyslipidemia so that each patient can be assessed and treated individually thereby accounting for the genetic, environmental and lifestyle factors unique to each patient.

Funding: Hamid Moradi and Elani Streja are supported by a career development awards from the Office of Research and Development of the Department of Veterans Affairs (H Moradi: 1 IK CX 001043-01A2, E Streja: IK2-CX001266-01).

Disclaimer: The content in this editorial is the sole responsibility of the authors and in no way should be seen as official policy or interpretation by the US Department of Veterans Affairs or the United States government.