We retrospectively reviewed the medical data of patients with resectable lung cancer who underwent lobectomy and systematic mediastinal lymph node dissection in the Department of Thoracic Surgery II, Peking University Cancer Hospital between July 2012 and June 2016. Patients with the following conditions were excluded from this analysis because each of these conditions can dramatically affect the duration of chest tube drainage: bronchoplasty and/or pulmonary arterioplasty, prolonged air leakage, reoperation due to chylothorax, atelectasis, liver cirrhosis, renal insufficiency, wound infection, costectomy, or severe subcutaneous emphysema.

The Institutional Review Board of Beijing Cancer Hospital approved the study (ID: 2017KT27), and patient consent was waived.

All patients underwent lateral thoracotomy or video-assisted thoracoscopic surgery (VATS) and were operated on by the same thoracic surgical team. No pleural tents or buttressed staple lines were used in this series. At the end of operation, the lung parenchyma was submerged in sterile saline to test for air leakage, and a single 24-Fr chest tube was placed in each patient.

The chest tube management protocol was modified in January 2014. Before that time, patients (control group) were managed with gravity drainage (water seal only, without suction). Since January 2014, patients (clamping group) were managed with gravity drainage during the first 12–24 h (depending on the time of surgery completion) after surgery. Once a radiograph confirmed re-expansion of the lung on the morning of the first postoperative day and no air leak was detected, the chest tube would be clamped, and the nurses would check the patient every 6 h. If the patient had no problems with compliance, the clamp was removed for half an hour in the morning to record the drainage volume every 24 h.

If patients developed intolerable abnormal symptoms, such as dyspnea, pneumothorax, and severe subcutaneous emphysema after chest tube clamping, the clamp would be removed for 30 min and reapplied after the symptoms had resolved. Such patients were placed under more rigorous surveillance after re-clamping, which required the medical staff to check on the patients every 2–4 h in order to promptly detect abnormal symptoms. This protocol was continued until another radiograph excluded the presence of pneumothorax. The chest tube clamping protocol in the clamping group has been illustrated in Figure 1. 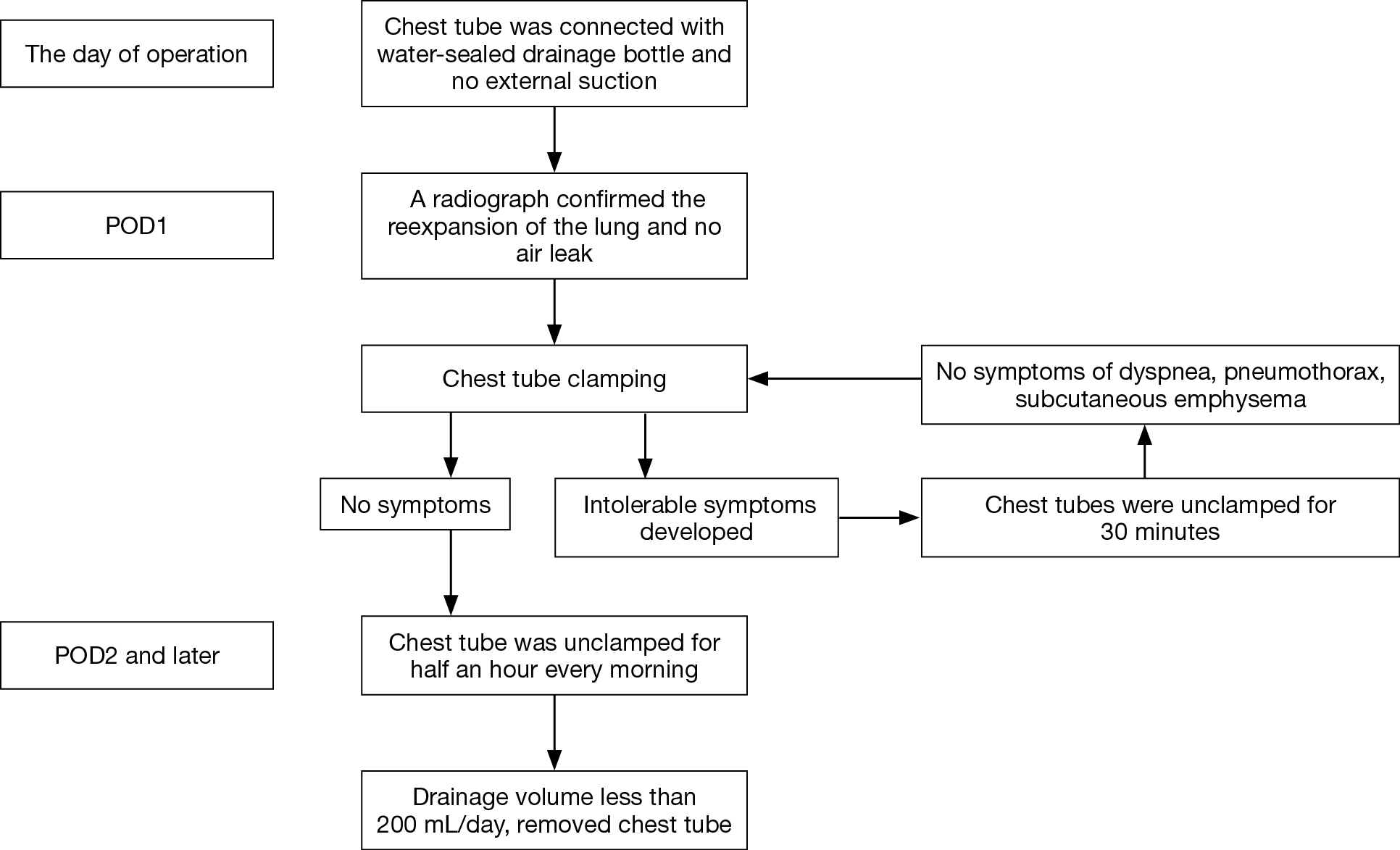 The daily output of pleural fluid was recorded. The criteria for chest tube removal were as follows: (I) drainage volume <200 mL in 24 h; (II) absence of air leakage and intrathoracic hemorrhage, and (III) absence of signs of purulent pleural effusion and atelectasis.

All clinical data were recorded. The pleural drainage volume was recorded on each day after the surgery until chest tube removal. Multivariate logistic regression analyses were performed for binary outcomes in order to identify factors significantly associated with duration of chest tube drainage. Continuous variables were expressed as mean ± standard deviation (or median and interquartile ranges for non-normally distributed data). Categorical variables were expressed as frequencies and percentages. The Student t-test was used to analyze normally distributed data after confirming homogeneity by the Levene test. The Mann-Whitney U-test was used to analyze non-normally distributed data. The Pearson chi-square (χ2) test or the Fisher exact test was used to compare proportions, as required. The P values for differences were calculated with a significance level of P<0.05. Propensity scores included the following variables: sex, operation side, VATS, and chylothorax. These variables were tested as factors that potentially determine the duration of chest tube drainage through multivariate logistic regression analysis, representing the probability of being assigned to either the control group or the clamping group. We matched propensity scores 1:1 using nearest neighbor methods, no replacement, and 0.2 caliper width. SPSS software (version 20.0; SPSS, Chicago, IL, USA) was used for all analyses.

Between July 2012 and June 2016, a total of 327 lung cancer patients underwent lobectomy and systematic mediastinal lymph node dissection in our hospital. Of these, 42 patients were excluded from the analysis owing to the following reasons: bronchoplasty and/or pulmonary arterioplasty (n=27), prolonged air leakage (n=8), reoperation due to chylothorax (n=2), atelectasis (n=1), liver cirrhosis (n=1), renal insufficiency (n=1), wound infection (n=1), costectomy (n=1), and severe subcutaneous emphysema (n=1, combined with prolonged air leakage). Thus, finally, 285 consecutive patients with operable lung cancer treated using lobectomy and systematic mediastinal lymphadenectomy were retrospectively analyzed. There were 130 male patients and 155 female patients. The mean age of the patients was 61.3±9.6 years. The overall duration of chest tube drainage was 3.9±1.4 days, and the overall postoperative stay was 5.6±1.6 days. Before January 2014, 63 patients (control group) were managed with gravity drainage (water seal only, without suction), and after January 2014, 222 patients (clamping group) were managed with the intermittent clamping protocol.

Figure 2 Number of patients for different durations of chest tube drainage in the (A) clamping and (B) control groups. 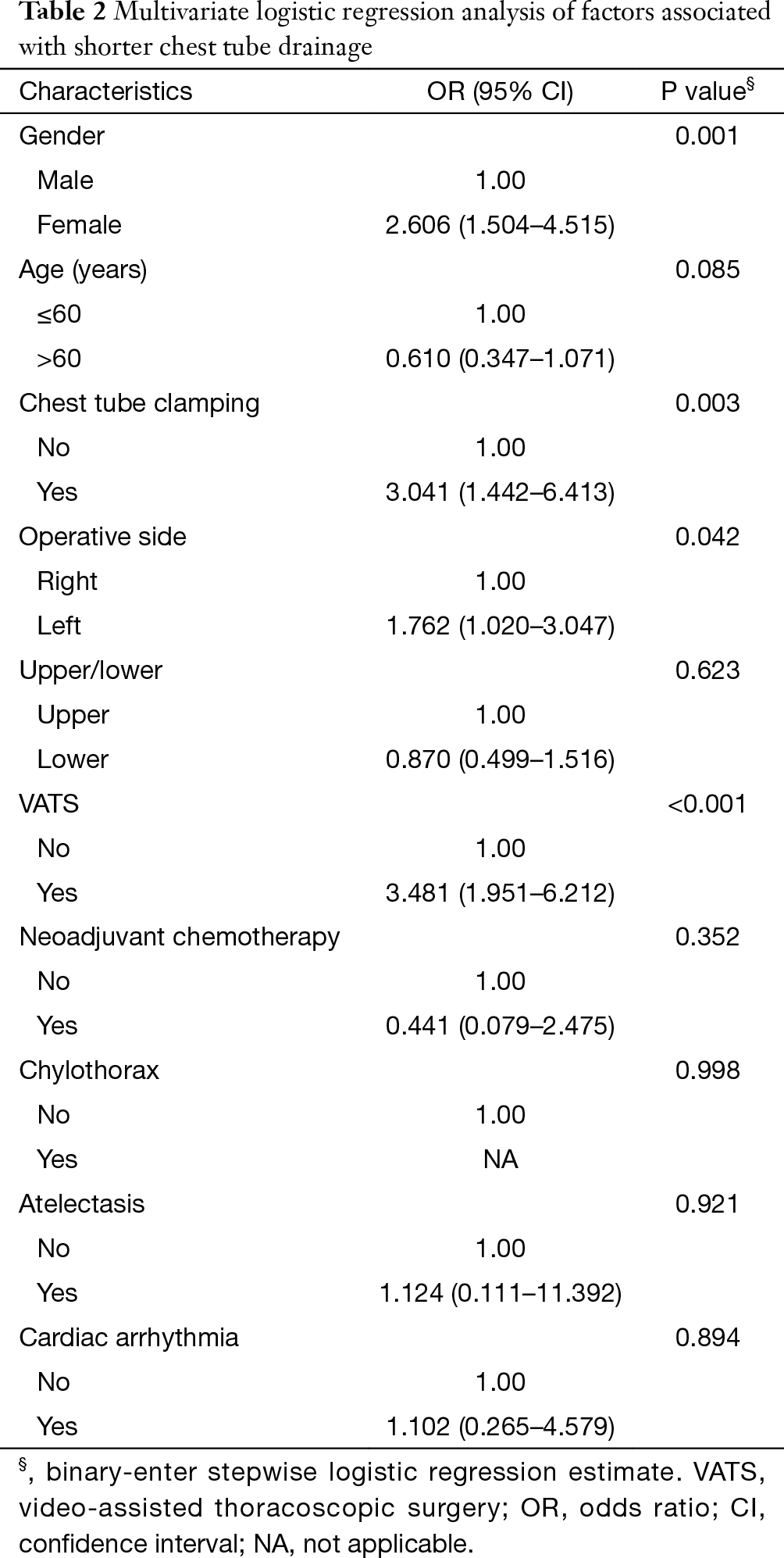 In pulmonary resection, the aims of chest tube insertion are to evacuate air and fluid from the pleural space, ensure complete pulmonary re-expansion, and restore respiratory mechanics (12). The criteria for chest tube removal include complete expansion of the remaining lung tissue, and cessation of air leakage and high-volume fluid drainage. Since chest tubes can exacerbate postoperative pain, cause ineffective ventilation, decrease sputum evacuation, and lead to atelectasis, thoracic surgeons aim to reduce the duration of chest tube drainage. In one study that examined the correlation between duration of chest tube drainage and pulmonary function after wedge resection, chest tube removal after 90 min postoperatively was found to be beneficial in terms of earlier respiratory rehabilitation, shorter hospital stays, and less analgesic use (5). However, it seems dangerous to remove a chest tube within a couple of hours after lobectomy, which is frequently performed in lung cancer patients. Thus, we had been working on finding a more reasonable method to reduce the duration of chest tube drainage in lung cancer patients, when we noticed the effect of tube clamping. To date, no study has investigated chest tube clamping for earlier chest tube removal after lobectomy for lung cancer.

The present study demonstrated that chest tube clamping decreased the duration of chest tube drainage. This finding may be explained by the revised Starling law (13). Pleural fluid is drained by an absorptive pressure gradient through the visceral pleura, by cellular mechanisms (14), and by lymphatic drainage, as the lymphatics open directly on the parietal pleura (lymphatic stomata) (15,16). According to the Starling equation, absorption and lymphatic drainage increase with increase in interstitial hydrostatic pressure, which occurs when the chest tube is clamped. This mechanism may explain how clamping facilitates chest tube removal.

Since thoracic drainage is intended to maintain negative intrapleural pressure, it is necessary to closely monitor for pneumothorax and subcutaneous emphysema after chest tube clamping. Although the procedure was uneventful in our study, our protocol required that medical staff check each patient every 6 h after chest tube clamping. If abnormal symptoms developed, this interval would be shortened to 2–4 h after re-clamping, depending on the subjective symptoms of the patient and objective evaluation by the surgeon. In this study, there were no severe adverse events related to chest tube clamping. The rate of thoracocentesis after chest tube removal in the clamping group was comparable with that in the control group. A few patients had mild symptoms like dyspnea or pyrexia after clamping, but these were relieved after unclamping the chest tube in most cases. We have not reported the exact rates of such mild discomforts in this study, and this is a limitation that should be overcome in subsequent randomized clinical trials.

In the clamping group, the chest tube could not be removed in all cases in a short-time period. About 72.1% of the patients had duration of chest tube drainage less than or equal to 4 days in clamping group, while this proportion lowered to 50.8% in control group. It seems that the clamping protocol could make the clinical pathway more uniform and therefore standardize clinical procedure after lobectomy. For patients who still had high drainage volume after 4 days’ clamping, the decision to remove chest tube should be made more cautiously. Possible reasons include higher protein-rich content of the pleural drainage and impaired absorption rate of the pleural surfaces due to unknown causes.

In a multivariate logistic regression analysis, patients treated with VATS procedure experienced earlier chest tube removal. The mechanism may be attributed to the less invasive approach and decreased exudation from wound surface. Furthermore, clamping still played a role in shortening chest tube duration in this VATS subgroup (3.5±1.0 vs. 4.4±1.4 days, P=0.036). Thus, with the growing enthusiasm to adopt VATS approach as routine practice in the future, clamping protocol should furtherly enhance recovery by a possible synergistic effect with mini-invasive procedure in terms of reducing chest drainage.

A number of limitations in the present study must be considered. First, this was a retrospective cohort, with all its recognized limitations. Second, the application of propensity score matching shrank the sample size. It is necessary to investigate patient tolerance to the protocol more precisely by using a larger sample size. Third, historical comparisons between patients from different time periods may introduce bias into the study. As surgical techniques are continually updated, we could not exclude the possibility that the results were influenced by technological improvements. Therefore, further prospective investigation is warranted.

In conclusion, the findings of this study indicate that chest tube clamping may decrease the duration of chest tube drainage and shorten postoperative hospital stays without causing adverse effects.

Conflicts of Interests: The authors have no conflicts of interest to declare.

Ethical Statement: The Institutional Review Board of Beijing Cancer Hospital approved the study (ID: 2017KT27), and patient consent was waived.