Chronic bronchitis is associated with severe exacerbation and prolonged recovery period in Chinese patients with COPD: a multicenter cross-sectional study

Chronic obstructive pulmonary disease (COPD) is a world-wide disease that characterized by persistent respiratory symptoms and airflow limitation. COPD exacerbation impacts patients’ health condition and quality of life negatively, accelerates disease progression and leads to hospitalization and even death (1). Among the COPD’s phenotypes, there are two main ones: emphysema phenotype or pink puffer and chronic bronchitis (CB) phenotype or blue bloated. CB, which is defined as the presence of cough and sputum production for at least 3 months in each of two consecutive years (2), has been found to be closely associated with the frequency and severity of COPD exacerbations. Chronic cough and sputum production increase the total number of COPD exacerbations per patient per year, as well as hospitalization (3,4). The COPDGene study found that patients with COPD concomitant with CB reported more exacerbations and severe exacerbations due to emergency visit or hospitalization (5). The PLATINO study also found that CB increased more respiratory symptoms and more exacerbations among patients with COPD (6). A recent study showed that COPD patients with persistent and newly developed CB had greater exacerbation frequency (7). Besides that, CB has other clinical consequences, including accelerated decline in lung function (6,8-10), worse health-related quality of life (6,7,11), and increased COPD-related or all-cause mortality (11-13). Additionally, in the patients without COPD at baseline, CB or chronic respiratory symptoms will increase the risk of airflow limitation (13) and the incidence of COPD on follow-up, independently of smoking habit which is the most common risk factor of developing COPD (14,15). Small data are available on relationship between CB and recovery following exacerbation (16,17). Therefore, COPD concomitant with CB has been considered to be an important clinical phenotype of COPD. However, studies on CB phenotype in COPD are rare in Chinese population.

The first aim of this study was to investigate the association between CB and frequency and severity of COPD exacerbations in a large Chinese cohort of patients with COPD. Second aim was to explore whether CB would lead to prolonged recovery period or poor recovery following the last exacerbation.

A nation-wide multicenter questionnaire study was conducted from September 2007 to December 2008. A total of 11 hospitals in 7 provinces (Beijing, Liaoning, Inner Mongolia, Sichuan, Shanghai, Hubei, and Guangdong) in China participated in this study. The patients who were clinically diagnosed as COPD were invited to complete a standardized questionnaire and spirometry function testing. Chest X-ray was performed to exclude the presence of other active pulmonary diseases.

COPD was diagnosed according to Chinese Thoracic Society guideline that post-bronchodilator forced expiratory volume in one second (FEV1)/forced vital capacity (FVC) was <0.7 and other airflow limitation diseases should be excluded. The exclusion criteria included: asthma, bronchiectasis, active tuberculosis, mental disease, cognitive dysfunction, communication difficulties, malignancy and severe heart dysfunction. Each patient was recruited once and data was analyzed anonymously. The study protocol was approved by the ethics committee of Peking University Third Hospital (No. M2017120), which is the primary research institution of this study. All the patients had signed the informed consent forms and the study outcomes would not affect the future management of the patients.

All subjects were individually interviewed by well-trained doctors from each center, utilizing a standardized questionnaire which was strictly designed by respiratory specialists from each center (18). The questionnaire covered demographic data, tobacco exposure, COPD characteristics, presence of CB, quality of life, characteristics of COPD exacerbation, recovery period and recovery of health status following the last COPD exacerbation.

CB was defined as the presence of cough and sputum production for at least 3 months in each of two consecutive years, in the absence of other causes of chronic cough (2). 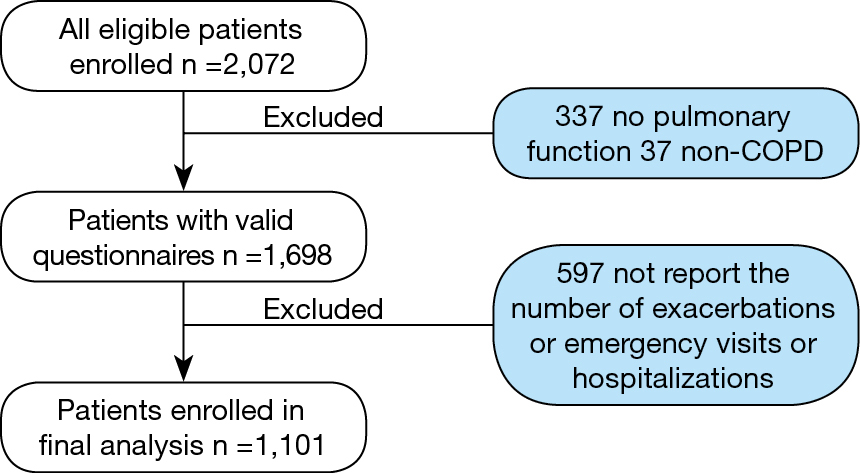 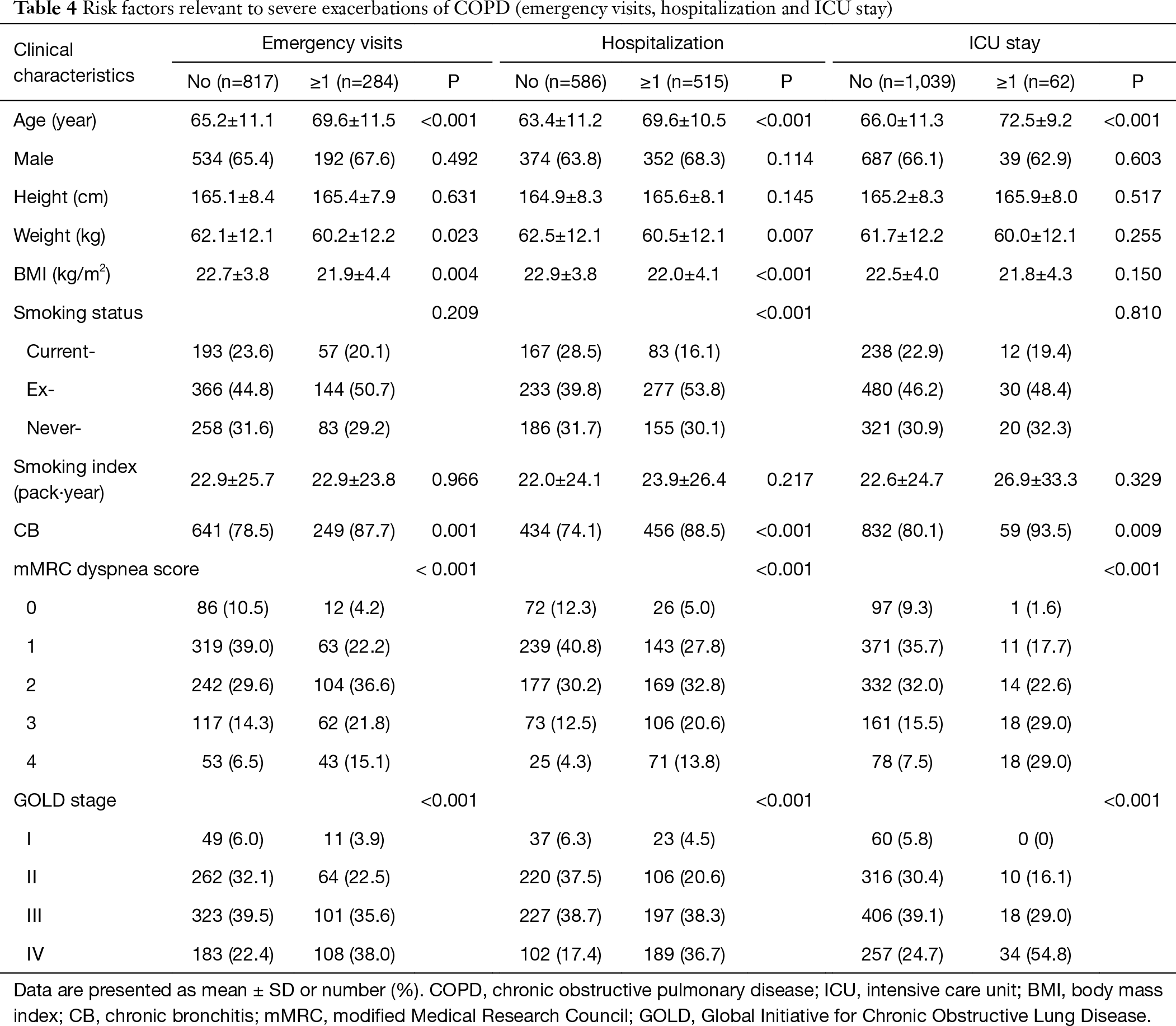 In the 62 patients who experienced ICU hospitalization, the lengths of ICU stay following COPD exacerbation were compared between patients with and without CB (10.1±8.3 vs. 9.5±9.5 days, P=0.889). 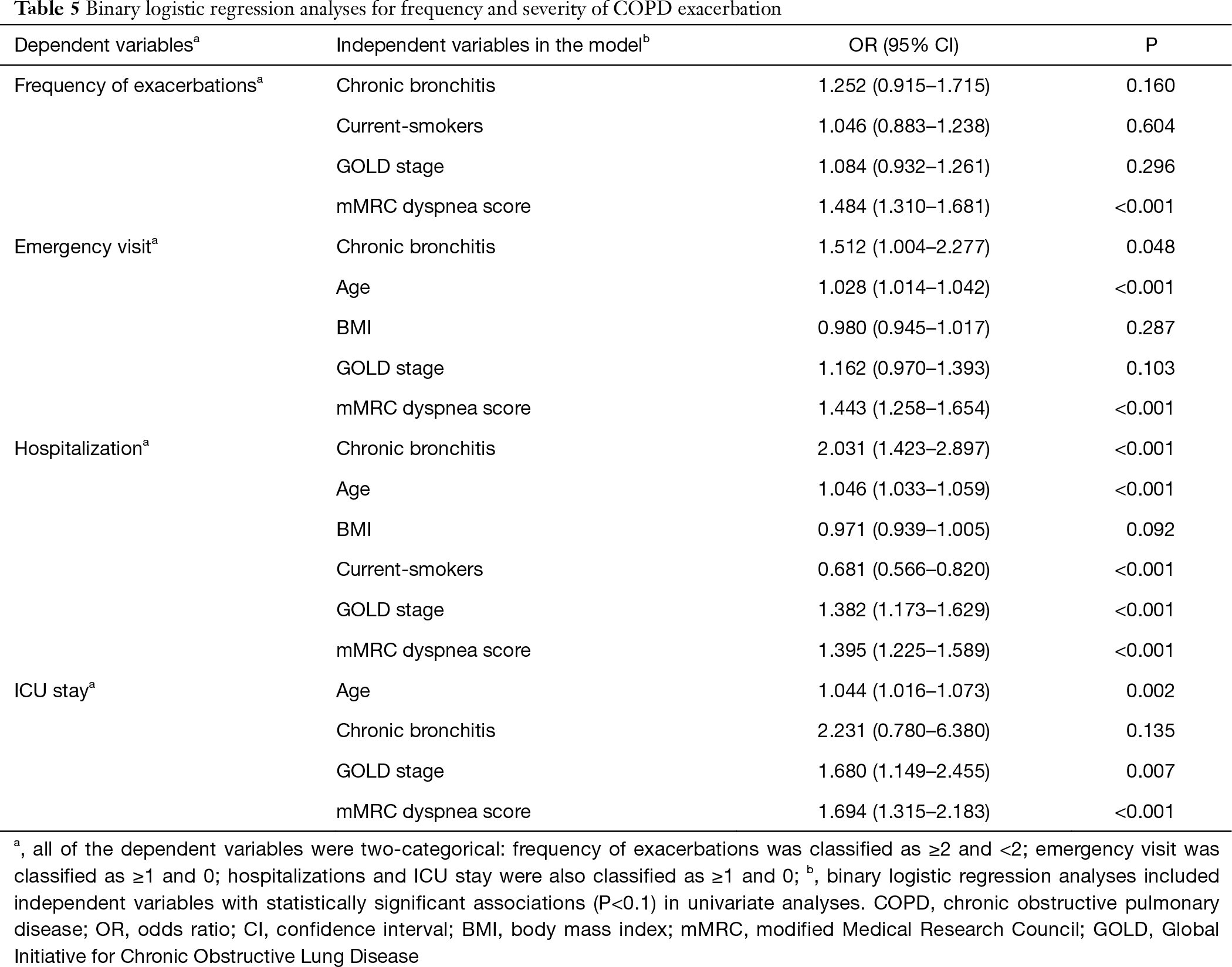 Of the 1,101 patients, 1,063 patients had answered the question “Did your physical condition recover to pre-exacerbation state following the last exacerbation”. Six hundred and fifty-four (59.4%) patients answered “Yes” and were placed in “well-recovery group”; the others were placed in “poor-recovery group”. Patients in poor-recovery group were older and more often current- and ex-smokers. Moreover, they were predominantly males and were characterized by CB, lower BMI, greater mMRC score and GOLD stage IV (Table 6). 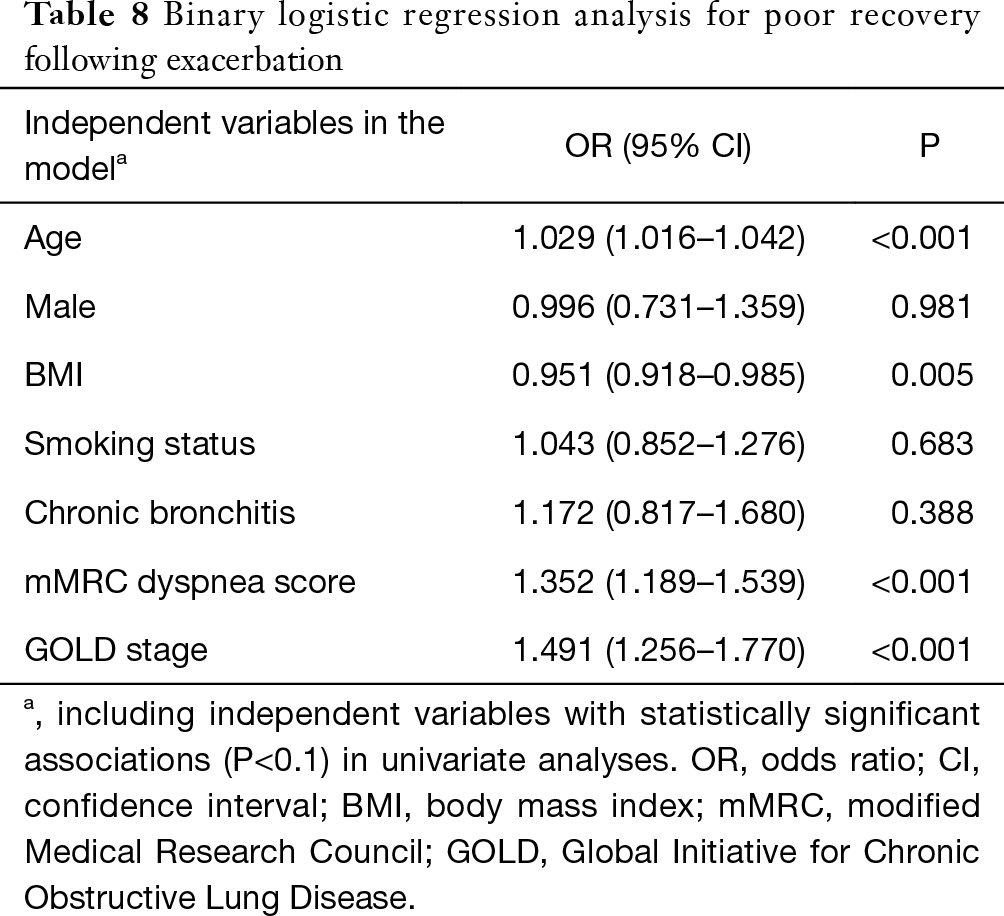 In this nation-wide, multicenter cross-sectional study, we assessed the relationship between CB and COPD exacerbation (including frequency, severity and recovery) in the prior year in a large Chinese population. Our data showed that in COPD patients, CB was associated with frequent exacerbator status (≥2/patient/year) and severe exacerbations, requiring emergency visit and COPD-related hospitalization.

Regarding the relationship between CB and COPD exacerbation, our data were consistent with the previous studies (3,5,6,9). In the Copenhagen City Heart Study, chronic mucus hypersecretion was associated with an increased risk of COPD-related hospitalization (9). A multicenter cross-sectional study found that CB was associated with frequent exacerbations and hospitalizations in COPD subjects (3). In COPDGene study, patients with COPD concomitant with CB reported more histories of exacerbation and severe exacerbation. CB phenotype was considered as a new clinical phenotype of COPD (5). Similar results could be seen in PLATINO study (6). Kim et al. further found that COPD patients with persistent and newly developed CB had greater exacerbation frequency. Even in those patients whose CB were resolved by quitting smoking, exacerbation frequency was still higher (7).

Another important result of our study was that patients with CB needed longer time to recover following the last exacerbation independently of age, GOLD stage and severity of dyspnea. A large number of patients could not reach well-recovery and most of them (>80%) had CB. To our knowledge, evidences regarding the relation between CB and recovery following COPD exacerbation were limited. Spencer et al. found that recovery period following infective exacerbation of CB was long (up to 6 months) and a further exacerbation within 6 months limited recovery markedly (16). In a large observational study, Anzueto et al. found that late recovery following exacerbation of CB/COPD were associated with aging, duration of CB >10 years, cardiac comorbidity, etc. (17). However, these two studies did not recruit patients without CB and could not illustrate the impact of CB on recovery period following COPD exacerbation adequately.

The prevalence of CB in patients with COPD was relatively high (80.8%) in the present study. In previous studies, the prevalence of CB in patients with COPD varied from 14% to 74% (3,5,6,21,24), which are clinic-based studies. In those population-based studies, the prevalence of CB was not so high, varying from 3.4 to 22.0% (25-28). Among these studies, the race, age range, and smoking status were different. For example, patients enrolled in our study were more often ex-smokers regardless of presence of CB, while in a Finnish study, the cumulative incidence of CB was 42% in continuous smokers and only 26% in ex-smokers (12). On the other hand, CB patients had more severe dyspnea and worse physical function (lower SF-36 PCS) in our study. Worse respiratory symptoms would precipitate these patients to seek medical treatment more frequently. Therefore, the proportion of CB would be greater in this clinic-based survey.

It is interesting that patients with the CB phenotype showed a lower BMI in our study, which was inconsistent with previous studies in which CB phenotype was associated with higher BMI and emphysematous phenotype was associated with lower BMI (31,32). The reason was not clear. First, we thought that it could not be excluded that some patients had CB and emphysematous phenotypes combination because patients enrolled in our study were mainly male and male subjects have been shown to be more likely to have a diagnosis of emphysema (33). However, not all patients underwent CT scans and it was very difficult to confirm in our study. Second, nearly 30% of the patients with CB were in GOLD stage IV. Fat free mass index had been proved to decrease as airflow limitation aggravating (34), suggesting the association between malnutrition and severe COPD and partly explaining the relation between lower BMI and CB in our study.

There are some limitations in our study: (I) our study was a cross-sectional questionnaire study based on the patients’ self-report, which is relatively subjective. In addition, memory bias cannot be excluded and some exacerbations were underdiagnosed; (II) comorbidities of COPD and treatment information which can influence mortality and hospitalizations in patients with COPD (35) were not included in our study. These two parts had been designed and included in our questionnaires. However, less than a half of patients had completed to report their concomitant chronic diseases and treatment effectively. Therefore, further follow-up study will be conducted to address these data and assess the relation between presence of CB and further exacerbation and long-term prognosis; (III) the recovery of health condition was only based on the patients’ answer and lack of objective and scientific assessment in such a questionnaire survey. The understanding of well-recovery would be various among different individuals. Peak expiratory flow rate and St. George’s Respiratory Questionnaire before and after exacerbation can be used to assess the recovery state (36). We will utilize these measurements to investigate the association between CB and recovery from COPD exacerbation in future study; (IV) CB was not independently related to ICU stay in multivariate analysis. We speculated that it was due to the small number of ICU hospitalization event, which may decrease statistical efficiency and make the confidence interval relatively wide. We noticed that the point estimate of adjusted OR of CB for ICU stay was similar to that of CB for hospitalization. CB would be independently related to ICU stay if more individuals experienced ICU stay.

Ethical Statement: The study was approved by the ethics committee of Peking University Third Hospital (No. M2017120), which is the primary research institution for this study and written informed consent was obtained from all patients.