Post-cardioversion ST-segment elevation: a case-based review of the pathophysiology

A 69-year-old woman with mitral regurgitation, diabetes, hyperlipidemia, and recurrent persistent atrial fibrillation (AF) was referred to the electrophysiology laboratory for transesophageal echocardiogram (TEE) and synchronized direct current cardioversion (DCCV). She was anticoagulated with warfarin for a CHADS2-Vasc score of 4. The remainder of her medication regimen included amiodarone, insulin, and atorvastatin. A recent coronary angiogram revealed no significant coronary artery disease. Baseline electrocardiogram (ECG) revealed AF, at a ventricular rate of 100 beats per minute, left axis deviation, and non-specific T-wave abnormalities (Figure 1). Cardioversion pads were placed in the anterior-posterior position. The TEE revealed normal function, mitral regurgitation, left atrial enlargement, and reduced left atrial appendage emptying velocity. There was no evidence of thrombus present. The patient then underwent DCCV with delivery of a single 200 joule biphasic shock. The rhythm converted to sinus, but the immediate post-cardioversion ECG revealed sinus arrhythmia, bradycardia, left axis deviation, and prominent ST-elevations in the anterior precordial leads (Figure 2). The location of ST-segment elevation raised concern for a possible left anterior descending territory infarct. However, within 30 seconds, the ST elevation resolved, with a repeat ECG demonstrating sinus rhythm, left axis deviation, and new biphasic anterolateral T waves (Figure 3). The patient awoke from sedation and was asymptomatic. After careful monitoring in the electrophysiology holding room, her ECG remained at baseline and she had no symptoms. She was discharged home and seen in follow-up clinic, without any long-term sequelae. 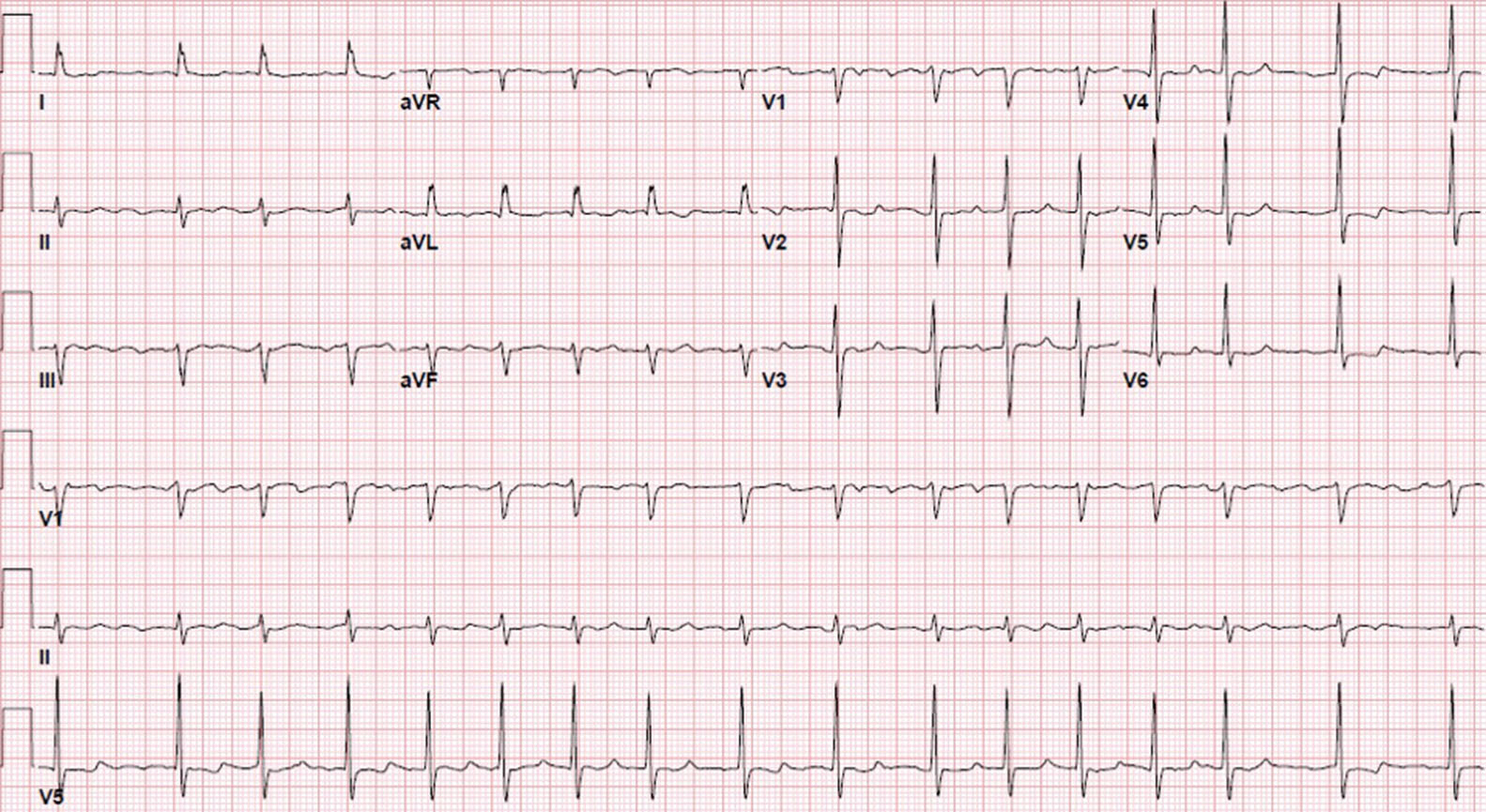 AF is the most commonly encountered arrhythmia in clinical practice. Cardioversion of AF carries the risk for potential complications, including bradycardia, asystole, ventricular tachyarrhythmia, stroke, myocardial infarction, thromboembolism, or death. The presence of ST-segment elevation immediately after DCCV raises concern for coronary embolism. Although this can occur in a variety of conditions, it is most common in patients with AF, and must be considered when the post-cardioversion ECG demonstrates ST changes consistent with myocardial ischemia. Importantly, acute MI due to coronary embolism is associated with a significantly higher risk of major adverse cardiac events, including all-cause and cardiovascular death, when compared to acute MI not due coronary embolism (1).

ST-segment elevation in the setting of ischemia occurs due to deranged cellular mechanisms, resulting in an injury current that reflects changes in resting membrane potential and cardiac action potential. Transmural infarct results in cellular hypoxia, depleting intracellular adenosine triphosphate (ATP) and thereby inhibiting the sodium-potassium (Na+/K+) ATPase pump, which normally transfers potassium into cells in exchange for sodium. Ischemic depletion of ATP activates the sarcolemma ATP-sensitive potassium (KATP) pump, allowing more potassium to leave the cell. The extracellular accumulation of potassium leads to partial depolarization of the ischemic tissue. In this diastolic component of the injury current, the resting electrical vector is then directed away from ischemic tissue and toward normal tissue, resulting in a negative voltage recorded as the diastolic isoelectric line. Represented as the T-Q segment on the ECG, which is used as the baseline for most ECG machines, the diastolic current of injury actually appears as elevation of the ST-segment (2).

The systolic current of injury results from changes in the cardiac action potential, including slower phase 0 upstroke, decreased amplitude, and shorter duration. Ischemia-induced partial depolarization closes fast Na+ channels responsible for the initial upstroke. Furthermore, lactic acid formation due to ischemia activates the sodium-hydrogen (Na+/H+) pump, sending H+ out of the cell in exchange Na+ and thereby slowing local conduction. This results in slower phase-0 depolarization and decreased amplitude of the cardiac action potential. As noted, ischemia opens KATP channels, causing K+ efflux, which shortens the action potential duration and leads to earlier repolarization. In concert, these changes cause a net positive extracellular charge and incomplete depolarization in the ischemic tissue. Therefore, the net electrical vector during depolarization is directed from normal to ischemic tissue, resulting in elevation of ST-segment. The sum of the systolic and diastolic currents of injury manifests as ST-elevation on ECG (3).

ST-segment elevation after DCCV is a well-documented phenomenon, with transient ECG changes that occur as early as the first QRS complex after cardioversion. Most commonly seen in V2, these ST-elevations typically resolve within seconds to minutes (4), there is typically no evidence of myocardial injury, either via simultaneous echocardiography or subsequent laboratory examination, with normal cardiac enzymes in most patients (5). These transient ST-elevations are not otherwise associated with adverse clinical outcomes (4). Risk factors for ST-elevation after cardioversion include monophasic DC shocks and use of propofol; though the amount of energy does not contribute to this risk (5).

The pathophysiology of this phenomenon is unclear, though several theories have been proposed, including vasospasm, pericarditis, ischemia, and direct electrical myonecrosis. However, laboratory, angiographic, and scintigraphic data do not support these theories. One of the earliest proposed mechanisms may offer the most likely explanation: sustained non-transmural depo (5) larization of myocardial cell layers leading to a voltage gradient within the ventricular wall, resulting in ST-elevation on the surface ECG.

Though characteristically benign, ST-elevation after cardioversion can represent plaque rupture or coronary embolism, emphasizing the importance of clinical history, serial ECGs, and in some cases, cardiac enzymes. In most cases, this finding resolves quickly without any short- or long-term sequelae for the patient, obviating the need for further intervention.