Lung transplantation is a viable option for a selected group of patients with end stage lung disease. Notwithstanding the encouraging results in terms of quality of life and survival, the surgical procedure itself and the administration of immunosuppressive drugs pose these patients at increased risk for a number of complications both during the early and late post-transplant course. Malignancies are among these complications.

We hereby report the case of a patient with a devastating fast-growing lung cancer after single lung transplantation (SLT) for pulmonary fibrosis (PF).

A 62-year-old non-smoking woman received left single lung transplantation for pulmonary fibrosis as part of a “twinning procedure” with another patient with chronic obstructive pulmonary disease (COPD). The immediate postoperative course was uneventful; during the following fifteen months the patient experienced a cytomegalovirus exacerbation managed with gancyclovir and repeated episodes of acute rejection. After 15 months she came in the transplantation clinic with cough, dyspnea and mild fever. At that time her immunosuppressive regimen included: FK 506 (range, 8–12 µg/L whole blood), prednisone (25 mg/day) and azathioprine (100 mg/day). Steroids were administered at this dosage due to repeated episodes of acute rejection during the first year after the transplant. Azithromycin was also administered beginning one month after the transplant (500 mg every other day). Chest X-ray performed one month before was clear. At the time of presentation of symptoms chest X-ray showed the presence of an area of consolidation on the right side (native lung) (Figure 1A). The first clinical diagnosis was pneumonia, given the symptoms, the radiological appearance and the relatively rapid onset. The patient was admitted and computed tomography (CT) showed the presence of a right-side area on parenchymal consolidation with very mild pleural effusion and hilar lymph nodes enlargement (Figure 1B). A bronchoalveolar lavage (BAL) showed the presence of gram positive and negative Cocci and Candida. The polymerase chain reaction (PCR) for CMV DNA in the peripheral blood was consistent with a CMV exacerbation. A broad-spectrum antibiotic therapy associated with antifungal drugs and gancyclovir was started. Notwithstanding this aggressive regimen dyspnea increased and the patient was transferred to the intensive care unit and intubated. Chest X-ray showed an increase of pleural effusion. Thoracentesis was performed for cytological examination. In the meanwhile, the functional parameters of the patient further deteriorated. A new CT scan showed enlargement of the parenchymal infiltrate and pleural effusion and also enlargement of the contralateral mediastinal lymph nodes Figure 2. Cytology of the pleural effusion was positive for adenocarcinoma. Total body CT scan was negative for extrathoracic cancer. Preoperative total body CT scan was negative. The patient died 14 days after admission, one month and a half after the last negative chest X-ray. 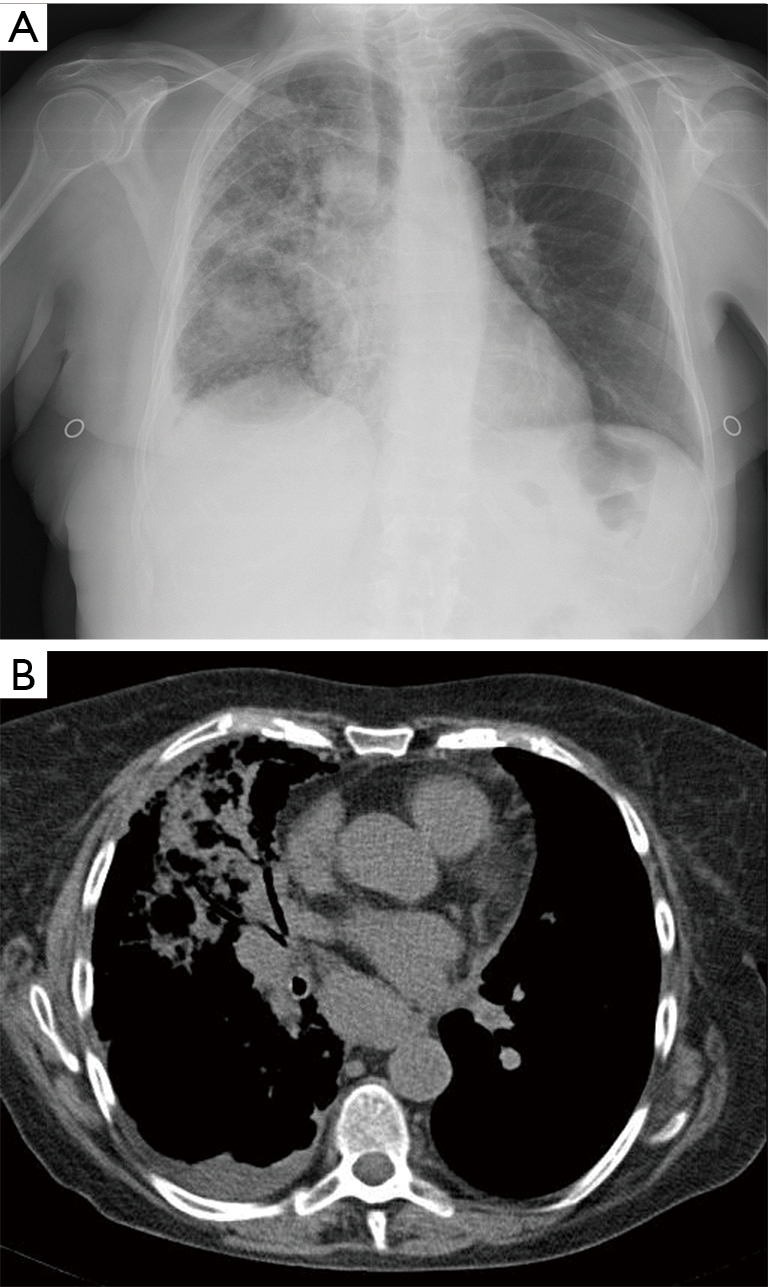 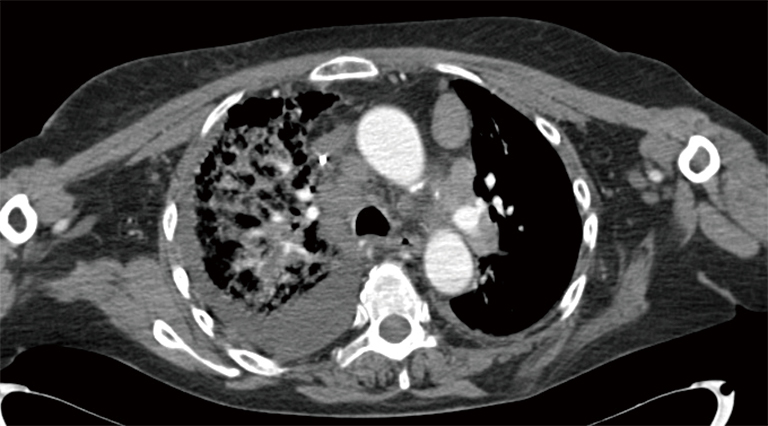 Figure 2 Computed tomography of the chest after ten days showing an increase of the pulmonary infiltrate and pleural effusion and enlargement of contralateral mediastinal lymph nodes.

Solid organ malignancies are well known complications after lung transplantation (1). Transplant recipients show a 2–3-fold increased risk compared to the general population and approximately 16% and 32% of them develop cancer within 5 and 10 years after the transplant respectively (2). At our center the overall incidence is 4.2% (1). The most common malignancies are lymphoproliferative disorders and skin cancer (3) although a variety of them has been described (lung, breast, prostate, colon and virus-associated malignancies).

Primary lung cancer is relatively rare with an incidence of 3.8% (4) and it may grow both in the native and in the transplanted lung, when SLT is performed (5.9% and 0.3% respectively) (5). The mean interval between the transplant and the onset of cancer is 56 months (2). The disease in the native lung (emphysema, PF) certainly plays an important role as remarked by the different incidence in the native and transplanted lung (5). The mean age of these patients is around 60 years (6). Age and a history of smoking are independent risk factors; however, they appear to be less powerful when compared to SLT that greatly increases the risk (7); our patient never smoked.

Also the immunosuppressive regimen plays a crucial role as shown by several studies, although the pathogenesis of lung cancer in this specific subset of patients is not completely known (8). Non-small cell lung cancer (NSCLC) occurs in up to 93% of the cases (5) with a prevalence of squamous cell carcinoma (38.4%), adenocarcinoma (30.7%) and adenosquamous (7.6%); small cell lung cancer (SCLC) is rarer (4).

The outcome of patients who develop bronchogenic carcinoma after lung transplantation is extremely poor due to the aggressiveness of the disease and the potentially late diagnosis related to presence of non-specific symptoms and late diagnosis. The most common radiological findings are pulmonary nodules (60%), parenchymal infiltrates (3%) and pleural effusions (12%). Many patients are not suitable for surgical resection due to the extension of the disease and reduced pulmonary reserve. Raviv et al. in 2011 (2) reported a 2.4% incidence of bronchogenic carcinoma in 290 lung transplant recipients and 74% of them were at stage IV at the time of diagnosis with a one-year mortality of 85% and a mean survival time of 120 days. Other studies showed that only 22% of them were at early stage with an overall survival ranging between 25% and 33% at 1 year (5).

Interestingly, the patient who received the contralateral lung is doing well with no sign of cancer or any other disorder related to the donor lung.

This case report demonstrates that not only late diagnosis may be an important issue, but also the potential dramatic rapid course of the disease poses serious problems when trying to design the appropriate treatment. Simply, there might be not enough time even for diagnosis. This is probably related to the immunosuppressive regimen required after lung transplantation.

In conclusion, strict monitoring of these patients should be mandatory also late after the transplant; double lung transplantation (DLT) should be preferred, when feasible, not only for functional reasons, but also to reduce the risk of cancer and other complications in the native lung.

Informed Consent: Informed consent was waived due to the patient died and her relatives live far from Rome, and only radiographic images are produced in the manuscript and they can’t in any way be referred to any specific patient.