Retrospective review of the diagnosis and treatment of pulmonary sequestration in 28 patients: surgery or endovascular techniques?

Currently, people choose surgical resection to treat symptomatic PS and prevent possible infection (5,6). Recent studies have suggested transcatheter endovascular embolization to be a less-invasive alternative technique to surgery, especially for neonates and children (7-9). Therefore, questions arise as which method should we select to primarily treat such patients: surgery or endovascular techniques? Nowadays, no treatment guidelines have been established.

In this retrospective study, we analyzed the diagnoses and treatments of PS, which consists of 28 patients (21 patients underwent surgery, 7 patients underwent interventional therapy) from a single hospital, to evaluate the presentation and outcomes of PS. Our study will provide valuable information for better understanding of pulmonary malformations.

We retrospectively reviewed the medical records of 28 patients with PS who underwent surgery or interventional therapy at Southwest Hospital from May 2005 to June 2016. Age, sex, clinical symptoms, chest computed tomography (CT) results, type and localization of sequestration; diagnostic methods, operative techniques, postoperative complications, and outcomes were collected and analyzed in all patients. The study was approved by the Ethical Committee of Southwest Hospital. Informed consent of the operation was obtained from all patients before surgery or intervention.

All patients were conducted under single lung ventilation in a lateral decubitus position. A standard lateral thoracotomy was performed in thoracotomy cases, and conventional 3 ports were placed in VATS cases. Anatomic lobectomy was performed for patients with ILS, and mass excision was carried out for patients with ELS. In all surgeries, one chest tube was placed for continuous drainage, but this tube was removed if drainage was less than 100 mL/day and no air leak was recognized.

Endovascular stent-graft exclusion was carried out under general anesthesia, systemic heparinization (intravenous, 5,000 IU), and a percutaneous right femoral artery approach. Participants and their family signed informed consent for the procedure. Thoracic aortic stent-grafts (COOK, Bloomington, IN, USA) were used to completely exclude the feeding arteries. The dimensions of device were chosen according to the aortic diameter in the landing zone with additional 20% oversize. 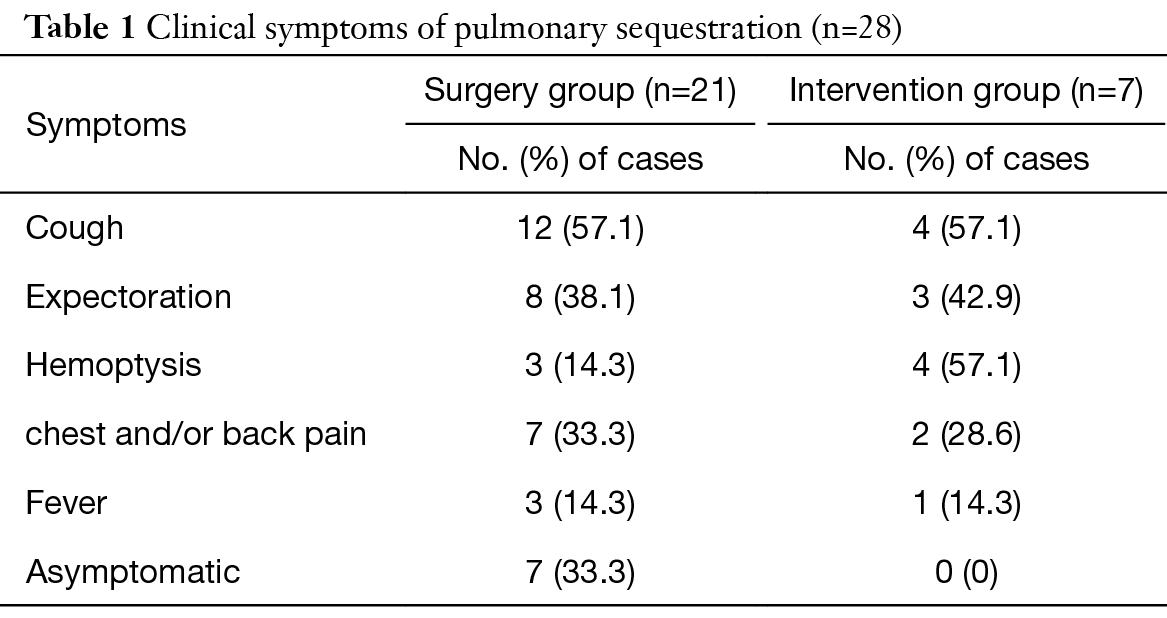 Types and localization of PS 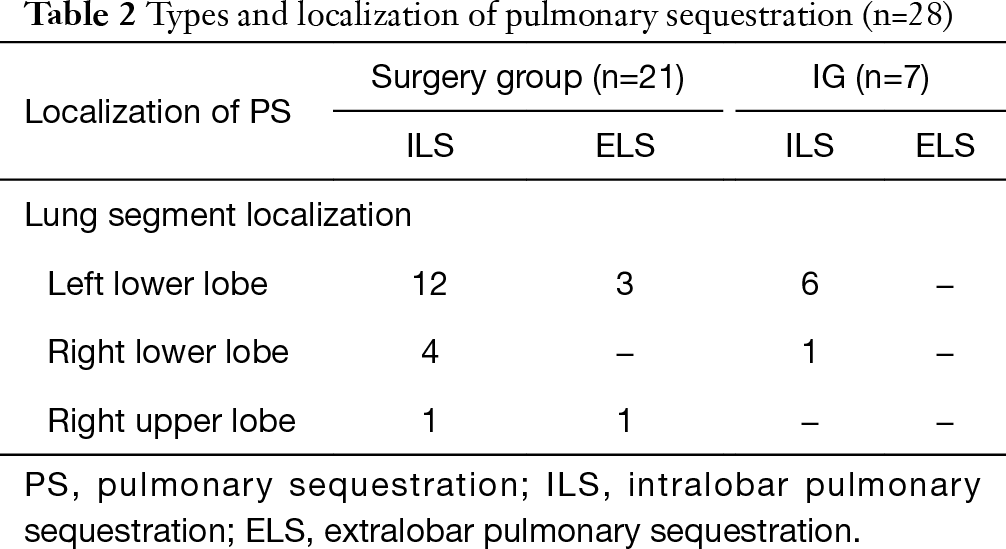 General chest CT scans were performed for all involved-patients in this study. Mass lesion was the most common CT finding (13 cases). Cystic lesion was found in 10 patients including one 7-year-old boy accompanied with bronchiectasis and 2 adults with air-containing cyst. Pneumonic lesions were discerned in 5 of them including 1 adult accompanied with bronchiectasis and another patient with secondary pulmonary hemorrhage.

Treatment and outcomes of surgery group

Twenty-one patients underwent surgery. Among them, 17 ILS patients were subjected to lobectomy (13 cases via thoracotomy and 4 cases via VATS). Other 4 ELS patients were subjected to mass excision of the sequestered lung tissue (2 cases via thoracotomy and 2 cases via VATS). Two patients without definite diagnosis preoperatively had over 1,000 mL of blood loss during operation via thoracotomy. Patients in surgery group underwent postoperative histopathologic examinations, all of whom showed negative bronchial communications. The examination results also excluded any other alternative diagnosis. One adult patient had a postoperative complication 2 weeks after discharge in surgery group: hydropneumothorax. The resulting hydropneumothorax was treated with tube drainage.

Treatment and outcomes of intervention group

Three cases of PS (2 cases in left lower lung and 1 case in right lower lung) performed endovascular embolization. Mid-embolization DSA revealed marked reduction of the abnormal vascular blush and occlusion of the feeding artery (Figure 2). Post-embolization syndrome with fever and pain at embolism site from 1 to 3 days were observed in 2 patients. Body temperature in both patients subsided with administration of a simple anti-inflammatory and analgesic treatment. 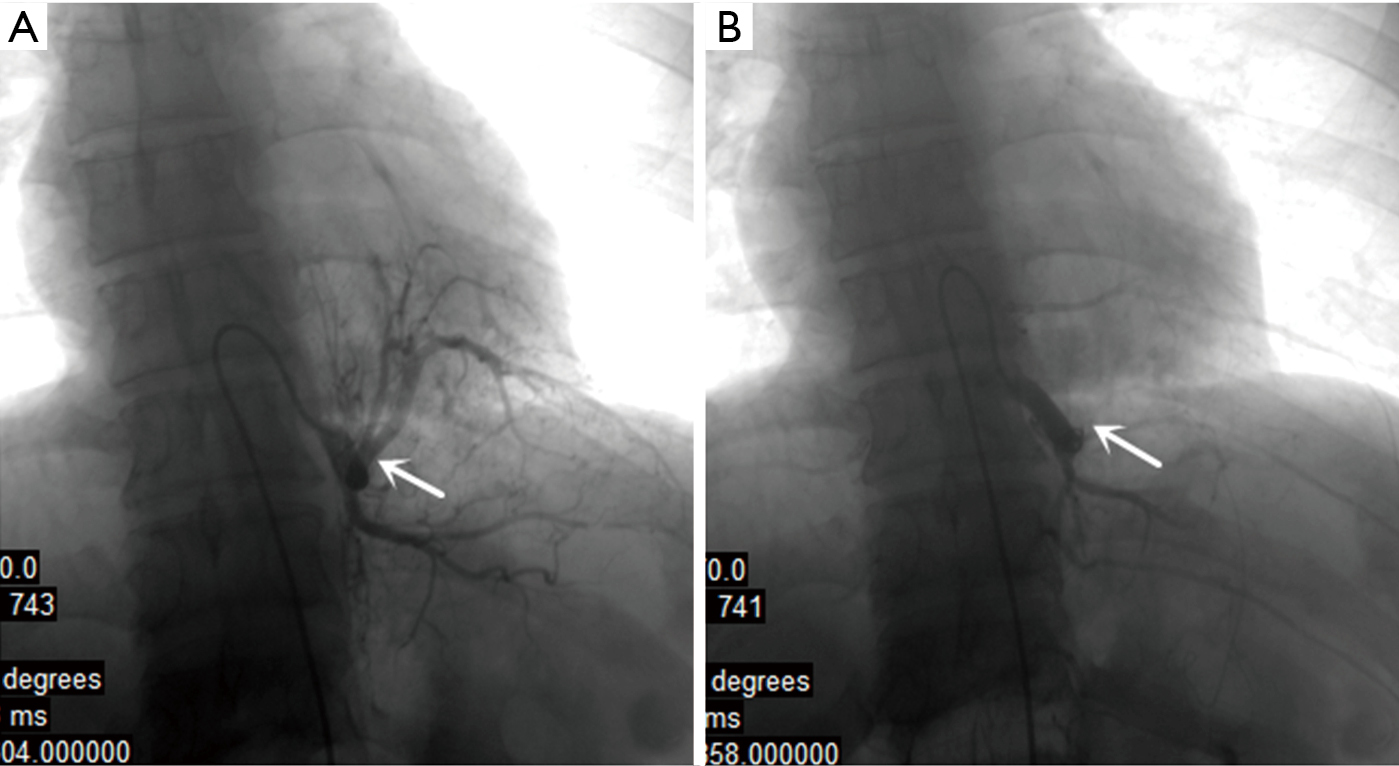 Four cases of PS located in left lower lung underwent endovascular stent-graft exclusion. They had aneurysmal dilation (3 cases) and aortic dissection (1 case) on the initial part of feeding artery. An immediately aortogram after the procedure showed that the initial placement of feeding artery was excluded successfully. CT images revealed no complications including endoleaks, migration, or access vessels injuries during the perioperative period. Significant regression of sequestered lung tissue on the size was observed 3 months after operations (Figure 3). 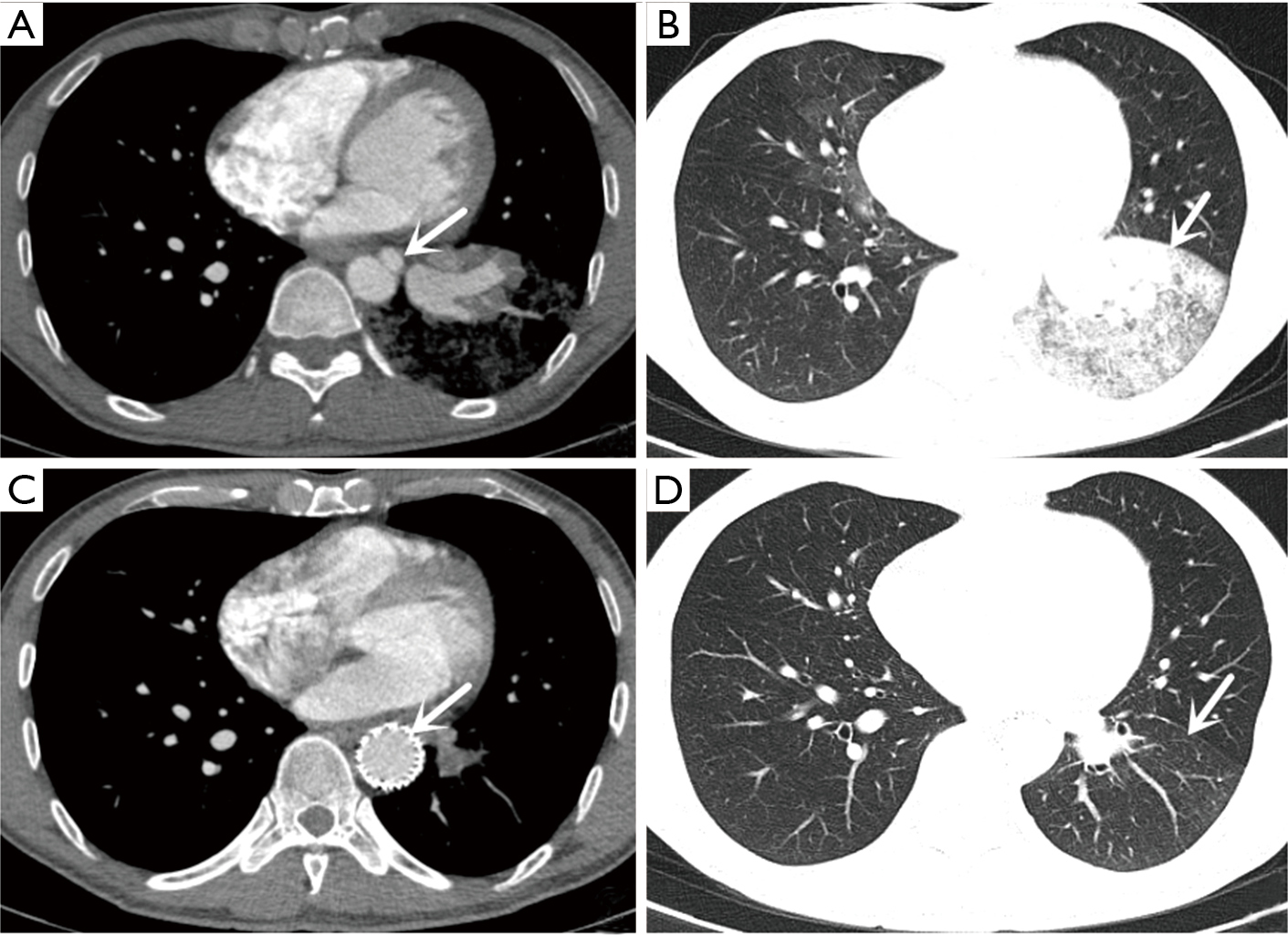 The duration of postoperative hospital stay was 9.6±2.3 days in surgery group and 4.7±1.5 days in intervention group, respectively.

Follow-up for a postoperative period of between 6 and 84 months was achieved in all 28 patients, with a median follow-up of 36 months in surgery group and 30 months in intervention group, respectively. In the surgery group, 3 patients had slight wound pain and 1 patient felt a little numbness of skin near the incision site. In the intervention group, complete regression of the sequestrated pulmonary tissue was observed in 2 patients who were treated with endovascular embolization, partial regression (>60%) was observed in 5 patients, of whom 1 patient was treated with endovascular embolization and 4 patients were treated with thoracic aortic endovascular stent-graft exclusion, but without clinical problems. No recurrences or further complications such as respiratory distress, infection, intrathoracic bleeding, or hemoptysis were observed in all patients.

ILS is the most common form, accounting for approximately 75–84% of PS cases in the literature (1,10) and 85.7% in our operation group. ELS is more frequently associated with other congenital malformations such as hypoplasia, congenital cystic adenomatoid malformation, congenital lobar emphysema, or bronchogenic cyst (2,11). Four of our patients were diagnosed with ELS combined with bronchogenic cyst. Lesions in posterior basal segment of left lower lobe andposterior basal segment of right lower lobe accounted for 80–90% of all PS (1,10). Our results showed the sequestration was located in the left lower lobe in 22 (78.6%) patients and in the right lower lobe in 4 (14.3%) patients.The most common symptom of PS was cough or expectoration, fever, hemoptysis, and chest pain (2,3). Our results showed consistent observations. Some studies reported higher percentage of asymptomatic patients with up to 31.8% (12,13) and 25.0% in our study. The discrepancy is probably due to lack of regular checkups and chest radiographs examination, which would only be taken until obvious symptoms were observed.

Traditionally, chest radiography or general chest CT scan is firstly applied to determine PS. However, these approaches cannot detect aberrant bleeding artery. On the chest CT film, mass lesion, cystic lesion, and pneumonic lesion are the most common imaging findings suggesting a PS, but cannot lead to a define diagnosis. To obtain a definite diagnosis of lung lesions, 10 of the patients underwent percutaneous needle biopsy and 7 of the patients underwent bronchoscopy in our study. Unfortunately, lung space-occupying lesions were not diagnosed by such invasive examination. In our cases, 21 patients were diagnosed preoperatively by enhanced CT scanning and CTA. Another 7 patients who could not be diagnosed preoperatively were the patients without performing enhanced CT scan. With the development of diagnostic approaches and increase of experience, chest radiography suggested PS-suspected patients can be definitively diagnosed through noninvasive procedures, such as enhanced CT or CTA.

The most consensus treatment for PS currently is surgical resection, which can prevent possible infection (5,6). Preoperative imaging evaluation should identify the location of the arterial supply and pattern of venous drainage to avoid surgical transection of an unsuspected artery and prevent fetal outcomes. In our studies, 2 patients had over 1,000 mL of blood loss during operation. Blood loss was due to lack of preoperative identification of the aberrant vessels and the severe adhesion. Although preoperative localization of the aberrant blood vessels is not required in literature (6), we still strongly recommend preoperative identification of the aberrant vessels to prevent major hemorrhage during operation. Both conventional thoracotomy and VATS can be used during a segmental resection or a lobectomy in PS (14-16). In this study, 15 patients received thoracotomy surgery, and 6 patients received thoracoscopic surgery within the last 2 years, suggesting VATS as a better approach than thoracotomy for PS resection with the continuous improvement of thoracoscopic techniques.

As a treatment of arterial bleedings, transcatheter endovascular embolization has been reported to successfully treat PS since 1998 (7). Embolization reduces the risk of blood loss during operation. Recently, this method has emerged as a less-invasive alternative to surgery, especially for neonates and children (8,9). At our institution, we used PVA particle soaked in microcoils (MWCE-35-5-5, COOK) as the embolic materials, 2 patients showed fever and pain at embolism site post-embolization for 1 to 3 days. We speculated that it was probably due to extensive and rapid necrosis of the sequestration. Treated patients were completely asymptomatic in long-term follow up including partial regression of the sequestrated pulmonary tissue.

Fragile blood vessels were observed in PS patients, possibly due to inflammation, atherosclerosis, and even aneurysms. Very few reports have been published describing aortic aneurysmal dilatation at the origin of the aberrant systemic artery (17,18). Surgical resection is applied to patients under urgent or semi-urgent circumstances like a possible rupture during the treatment of PS. In our study, 3 cases of PS have aneurysmal dilation and 1 case of PS has aortic dissection at the initial part of feeding artery. Although the etiology of the aneurysmal dilation and aortic dissection is uncertain, we and others suspect it may be due to systemic arterial high-pressure flow in the sequestered lung (17,18). Low wall shear stress occurs at arterial bifurcations, branch ostia, and curvatures, with aneurysm growth occurring at these low shear stress regions (19). In this case, the origin of an aberrant artery was located on the thoracic aortic with systemic arterial hypertension, the hemodynamics of which may have driven progressive dilatation and aortic dissection. We took endovascular stent-graft exclusion to completely exclude the feeding arteries to avoid the risk of hemorrhage and rupture of the aneurysm or dissection. Significant regression of sequestered lung tissue on the size was observed 3 months after operations. None of the patients had a problem during follow-up period.

Because of the significant improvement of symptoms, there was no need to patients of intervention group for surgery. But they were informed that surgical treatment could be considered in case of clinical symptoms recurrence or lesions enlarged. Long term follow-up was required to determine whether surgical resection of PS was needed. Initial follow-up was performed 3 months after endovascular embolization or endovascular exclusion by CT-scan and, thereafter, follow-up was performed after 6 months and then annually.

However, some strongly suggested performing surgical resection on all PS patients, including asymptomatic ones, to exclude the risk of infection, complication after embolization, and any other pathology (20). Given this contradictory result, questions raised as which method should we select as the primary treatment: surgery or endovascular techniques? Nowadays no treatment guidelines have been established. In our study, endovascular techniques were considered for patients when pulmonary lesions were small-sized (<3 cm), which partially explained the reason that there were 2 cases with complete regression and 5 cases with partial regression (>60%) during the follow-up period. Due to a retrospective study and a limited number of cases, we cannot conclude the specific size of the sequestrations as a basis for treatment options in our study. Prospective studies and large sample are needed to clearly establish criteria for treatment options based on lesion size, type, symptoms, and age.

Clinical presentation of PS is non-specific and hard to diagnose. Noninvasive procedure, such as enhanced CT or CTA, may be an economical and effective mean for the diagnosis of PS. Surgical resection for PS is the major treatment approach with VATS and posterolateral thoracotomy as feasible alternatives. Arterial embolization of PS could be considered when pulmonary lesion is small-sized. Endovascular stent-graft exclusion could be used to treat combined arterial aneurysm and dissection of PS.

Ethical Statement: The study was approved by the Ethical Committee of Southwest Hospital. Informed consent of the operation was obtained from all patients before surgery or intervention.