The link between spontaneous coronary artery dissection and takotsubo cardiomyopathy: analysis of the published cases

Spontaneous coronary artery dissection (SCAD) and takotsubo cardiomyopathy (TTC) are two non-atherosclerotic causes of myocardial infarction. They share several common features. Firstly, they have a predilection for the female gender and, in both, the exact mechanism has yet to be fully established. Nonetheless, hormonal effects and sympathetic burst associated with a stressful event are known to be involved. In a recent prospective registry including patients admitted to the Vancouver General Hospital with a diagnosis of SCAD, emotional stress was defined as currently experiencing major stress prior to admission and categorized as severity level of almost 3 on a 4-point scale. Presence of physical stress was then defined as a new or unusually intense physical activity performed within 1 week from hospitalization or an intense isometric activity defined as lifting more than 50 pounds (1). Clinical manifestations of both diseases include angina and acute coronary syndromes.

Interestingly, these two conditions have been historically separated at birth; the proposed Mayo Clinic Criteria for the diagnosis of TTC (2) include in fact the absence of images consistent with acute plaque rupture, even though the presence of non-obstructive coronary artery disease (luminal stenosis <50%) is allowed. On the other hand, angiographic appearance of SCAD varies from the classic hallmark of contrast dye staining with multiple radiolucent lumen (Type 1) to diffuse and smooth narrowing causing different degrees of vessel obstruction (Type 2) and focal stenosis mimicking an atherosclerotic plaque (Type 3). In this scenario, coronary angiography is mandatory to confirm (Type 1 SCAD), suspect (Type 2 and 3 SCAD) or exclude (in TTC) both diagnosis. Nevertheless, about 70% of SCAD (3) need intravascular imaging to be assessed.

Furthermore, one of the main differences between the two conditions, is that regional wall motion abnormalities in TTC extend beyond a single epicardial vascular distribution.

Notwithstanding, it is possible, even if rare, that a patient with obstructive coronary atherosclerosis may develop TTC (4). In this regard, Napp recognized that left ventricular motion abnormalities in post-ischemic myocardial stunning and TTC have similar clinical presentation and course, ECG, imaging and histopathologic findings (5).

Moreover, natural history of both SCAD and TTC is often represented by spontaneous healing.

Recently a chicken or egg question on the topic has been raised by several authors: is it possible that SCAD and TTC overlap? Two main hypothesis have been made: (I) SCAD could be the stressful event leading to TTC, as previously suggested for MIs in general (4); (II) The external torsion forces and mechanical solicitations associated with typical wall motion abnormalities in TTC could cause the dissection of intima especially in segments located at the border between basal hyperkinesia and mid-apical akinesia (6).

Coexistence of SCAD and TTC has been reported in five case reports and one retrospective case series until today, including a totality of 14 patients. Their features are listed in Table 1 and in Table S1 and analyzed below. 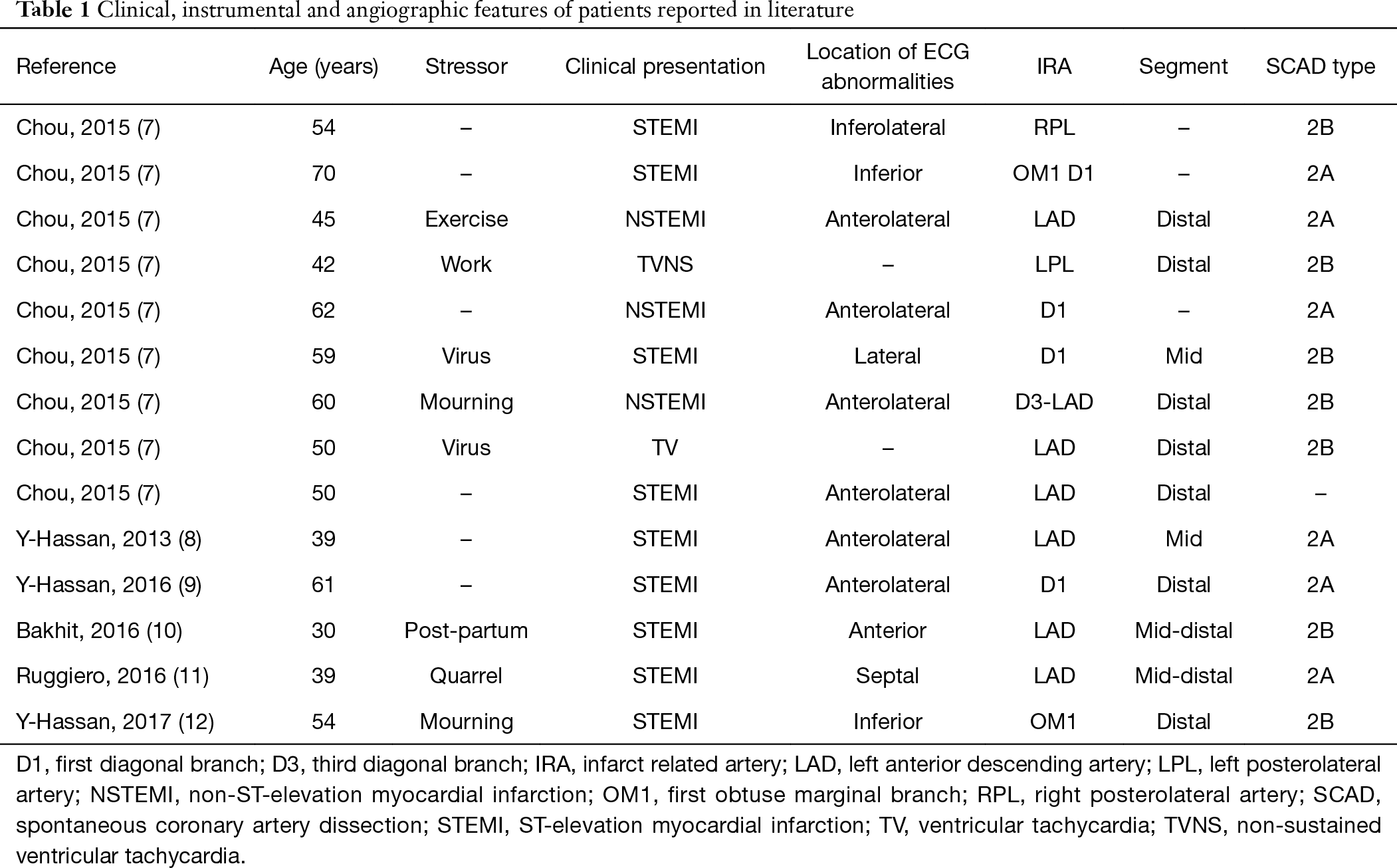 All patients were female with an average age of 51 years. Only one-third of them had cardiovascular risk factors (hypertension) whether none had remarkable past medical history. Eight cases (57.1%) followed stressful precipitating factors.

Twelve patients presented with elevation of troponin (the remaining two case reports do not refer to cardiac biomarkers).

ECG showed ST-elevation in 9 patients (64.3%), ST-depression or anterolateral T-wave inversion in 3 patients (21.4%) and ventricular tachycardia in 2 patients (14.3%). Evolution of ECG in case reports showed the appearance of widespread or anterior T-wave inversion and prolongation of QTc, stereotypical evolution of TTC that can also be found in myocardial stunning (Wellen’s pattern).

Echocardiographic findings and/or ventriculography were consistent with the typical takotsubo pattern of wall abnormalities, namely basal hyperkinesia and ipo/akinesia of the mid-apical segments, with concurrent ballooning in 5 patients (35.7%).

Importantly, cardiac magnetic resonance was performed in three patients and late gadolinium enhancement was only present in the supply region of the dissected arteries, typically sparing mid and apical regions. This could be the proof of the simultaneous presence of TTC (with its typical absence of delayed enhancement) (2) and myocardial ischemia, confirmed by regional subendocardial delayed hyper enhancement, caused by a coronary dissection.

Coronary angiography was always performed. 13 out of 14 angiograms (one was not available in the Table S1 of the case series) showed Type 2 SCADs, the most common angiographic appearance (3) of coronary dissection. This diffuse and usually smooth narrowing frequently involves the mid to distal segments of coronary arteries and may need intravascular imaging for diagnostic certainty. Nevertheless, IVUS was performed in only two of this cases. Seven lesions were subtype B.

In 12 angiograms (85.7%) the culprit lesion was found in the left anterior descending artery or in one of its branches and in 4 patients, the mid segments were involved. In these patients, the mechanism proposed by Madias (6) (hypothesis 2) seems plausible.

In 13 patients (92.9%) a conservative strategy was chosen, in line with the evidence. In three of these patients, coronary angiography was repeated in the follow-up period and showed complete spontaneous healing. One patient was treated with the implant of a biodegradable vascular scaffold.

In conclusion, while it is virtually impossible to declare whichever occurs first, it appears likely that each of them may have provoked the other equally. The key to this dilemma could be represented by coronary angiography, and furthermore by intravascular imaging, especially optical coherence tomography (OCT), since (I) SCAD could be underestimated because of its misleading angiographic appearance; and (II) the prognostic value of coronary slow flow in patients with TTC has been previously described. These findings could be in fact associated with microvascular dysfunction as well as with an underlying dissection of the infarct related artery.

We believe that given the absence of international guidelines or expert consensus documents on the topic, a systematic approach for the early detection of SCAD is needed. Our group already proposed a scoring system in this respect (13). Expanding the role of angiography and, moreover, of intravascular imaging, currently underperformed and restricted to exclusion tools for the diagnosis of TTC, could increase the diagnostic certainty and improve prognosis in these two clinical conditions.