Case report: improvement of cardiac remodeling with shock wave therapy of a patient with ischemic cardiomyopathy

Percutaneous coronary intervention (PCI) and coronary-artery bypass grafting (CABG) are two major preferred reperfusion strategies to restore the ischemic-related artery patency, but PCI and CABG do not necessarily guarantee the recovery of post-procedure left ventricular (LV) dysfunction and release of symptoms. Microcirculation dysfunction not shown in coronary angiography is thought to be one such mechanism (1). Furthermore, microcirculation is thought to cause no-reflow phenomenon (2,3). Currently, there is no consensus on the definitive effective way to enhance microcirculations under clinical circumstance (4).

Shock wave (SW) is a longitudinal acoustic was, traveling with the speed in water of ultrasound through body tissue. SW therapy (SWT) is expected to produce improvement of the coronary circulation with stimulation of angiogenesis through the induction of growth factors such as vascular endothelial growth factor and nitric oxide synthase, and the recruitment of endothelial progenitor cells (5-7). SWT have been proved to improve the microcirculation in both basic and clinical trials (2,5,7-9). However, majority reports of SWT is either short-term follow-up less than 1 year, or no improvement in LV ejection fraction (LVEF) and ventricular remodeling over long term. In addition, few study has reported the efficacy and safety of SWT on heart failure.

Therefore, we report the effect of SWT on a patient who was diagnosed as heart failure and had no valid drug therapy, with a long-term follow-up for 1.5 years and review the pertinent literature.

A 59-year-old man with a 10-year history of diabetes and frequently exhibited chest pain for 20 years was admitted to our hospital. The patient had received CABG in 2002, the bypass grafts were: left internal mammary artery (LIMA)-left coronary artery (LCA), aorta (AO)-saphenous vein graft (SVG)-the first diagonal (D1)-obtuse marginal (OM), AO-SVG-right coronary artery (RCA). Follow-up angiography showed all blood vessels are stiff and rigid, among which the largest degree of the stenosis for AO-SVG-D1-OM and AO-SVG-RCA were both 90%, and unfortunately this patient cannot undergo a second CABG according to the current guidelines. He suffered from chest pain and exertional dyspnea after a 200-m walk and was hospitalized more than 3 times due to dyspnea and other manifestations of chronic heart failure per year. His angiography in 2015 showed new lesions: distal stenosis of 80% of left main coronary artery (LM), total occlusion of left anterior descending artery (LAD) after branching interval artery, distal stenosis of 99% of left circumflex (LCX), diffuse lesions through the bridge vessels with stenosis of 90% and of 60% (Figure 1). The drugs that the patients take include: clopidogrel, aspirin, beta-blocker, angiotensin II receptor blocker (ARB), statin, diuretics, isosorbide dinitrate. We changed angiotensin-converting enzyme inhibitors (ACEI) to ARB because the patient couldn’t tolerate the cough symptom when he took ACEI (Table 1). 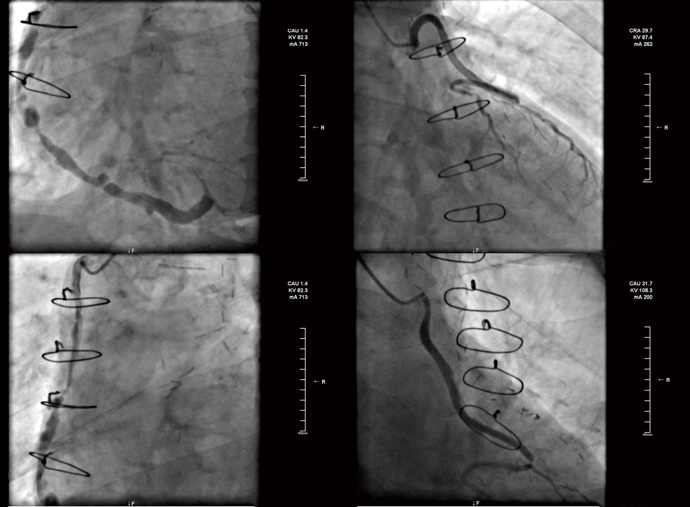 Figure 1 The image of coronary angiography in 2015.

Considering that the drug therapy was invalid to improve the symptom of this patient, cardiac SWT treatment was given to this patient to improve the symptom and life quality of this patient (our investigation was approved by the hospital’s ethics committee). Shockwaves were applied using a commercially available cardiac shockwave generator system (Jingcheng, China) under echocardiographic guidance. With this generator, the energy flux density can be adjusted between 0.09 and 0.2 mJ/mm2, with a focus size of 6.6 mm (width) × 40 mm (length) to ensure transmural coverage. The focus can be applied up to a depth of 14 cm to enable coverage of all cardiac segments. The system includes a shockwave generator system with a therapeutic shockwave applicator head, an external ultrasound system with an adjustable transducer holder mounted on the shockwave device, and an ECG-trigger monitor. The treatment schedule was one session per month, for 3 consecutive months. And after monitoring of the patient for a period of 3 months, we repeated the same treatment regime for an accumulative period of 1 year, the reason that we apply 2 cycles of SWT was that the symptoms of this patients improved significantly after 1 cycle of SWT, and thus we wondered whether 2 cycles of SWT can further improve the quality life of this patient. The targeted spots were pre-evaluated by single-photon emission computed tomography (SPECT), each ischemic area was targeted with no less than 10 points every time, with a 200/click each point. Up to 6 target spots (total of 1200 pulses) were treated.

After cardiac SWT treatment for 1 year, the patient’s overall clinical symptoms, myocardial infusions, and the cardiac function were significantly improved. In terms of the overall clinical symptoms, the degree of chest pain decreased and the exercise tolerance increased. Before the SWT treatment, the 6-minute walk test showed that the patients had chest pain within a walking distance less than 350 meters, while after SWT for 1 year, the patients can tolerate a walking distance more than 430 meters. The myocardial perfusion tomographic imaging indicated that the survived myocardium increased from 41% to 77% by half year after SWT treatment, significantly, the survived myocardium finally increased to 100% after 1-year treatment (Figure 2,Table 2). For the cardiac function, LVEF was 34% calculated by SPECT and 43% by cardiac uhrasonography (UCG) at the time of admission, LVEF increased to 51% by SPECT, and 45% by UCG after half year, and finally increased to 55% indicated by UCG by 1 year (Table 2). The cardiac remodeling was also improved, LV end systolic volume (LVESV) and LV end diastolic volume (LVEDV) were decreased from 135 and 203 mL to 97 and 171 mL indicated by SPECT. The 1.5-year follow-up of UCG showed that LVEF remained at 55%, LVESV and LVEDV were 83 and 177 mL respectively. 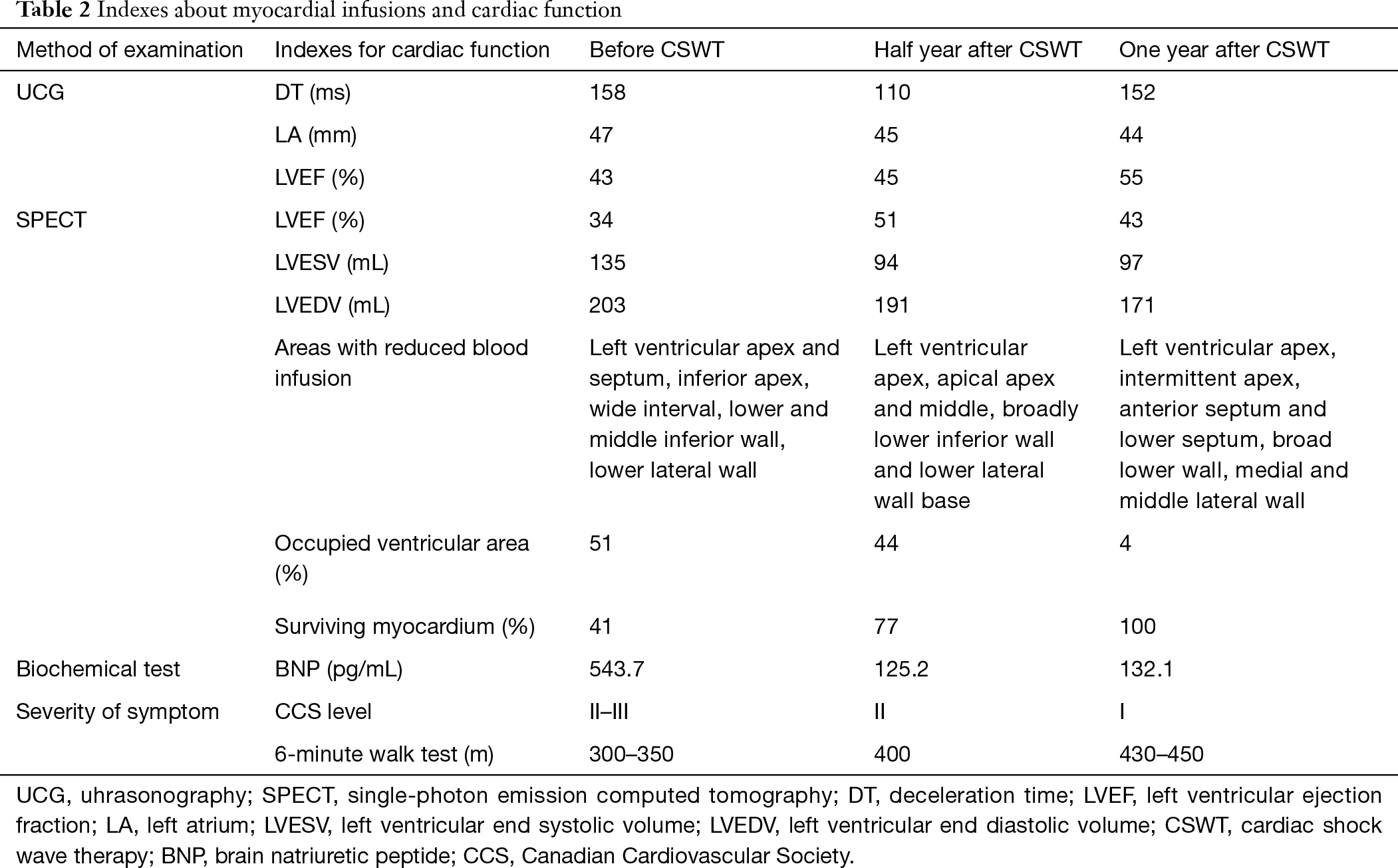 We hereby presented a case in which the patient with ischemic cardiomyopathy had no chance for revascularization and still suffered from chronic heart failure induced by myocardial ischemia. The drug therapy was insufficient to improve the symptom of this patient. Cardiac SWT could be an alternative mean for such kind of patients. In our case, cardiac SWT significantly improve symptoms of heart failure, the cardiac function, cardiac remodeling, and the odds of cardiac muscle survival. More importantly, cardiac SWT is non-invasive and reports of no side effects. To the best of our knowledge, this is the first report of 2-cycle cardiac SWT treatments (different methodology) with a 1.5-year follow-up (long-term follow-up).

Blood supply via microvessels in the heart is a critical determinant of the outcome of myocardial infarction (10,11). Disruption of coordinated cardiomyocytes growth and blood supply can eventually lead to the transition from cardiac hypertrophy to heart failure (12,13). Treatments that increase blood supply in an ischemic area through angiogenesis have thus been examined in order to prevent/treat the development of heart failure (14). Cardiac SWT has been shown to reduce ischemia by stimulating angiogenesis and revascularization in ischemic myocardium. The possible mechanism could be due to “cavitation effect”, which utilize mechanical shear force on vascular and myocardial endothelial cells. Up-regulation of vascular endothelial growth factor (VEGF) (5), endothelial nitric oxide synthase (6,15), and basic fibroblast growth factor, etc., is an additional factor.

In this case, after 2 cycles of cardiac SWT for 1 year, the symptom of heart failure, cardiac function and cardiac remodeling had a remarked improvement. The possible mechanism is due to the enhanced ability to maintain the partially damaged cells still able to be viable with degrees of further amendment, so that the myocardium surviving increased. The cardiac SWT treatment had promoted blood supply (microvessels) and coordination of the cardiomyocytes growth which explicates further the heart function recover. Previous studies had shown that SWT was effective in patients with coronary heart disease or angina (16-18), with the improvement of symptom and cardiac function. However, only few study reported the improvement of cardiac remodeling. Although Yang et al. (9) have reported the data on cardiac remodeling, the follow-up period was only half year, and we need to know the long-term benefits analysis of SWT. Furthermore, the patient in our case report is characterized by the following factors: (I) the symptom of heart failure was severe; (II) the stenosis severity of coronary artery was still high even after CABG; (III) the drug therapy was insufficient for this patient, and the patient had no chance for another PCI. And thus, we aimed to give some clues on the therapy protocol of such patients. For further evidence, we will also set a longer follow-up period for these patients. Nevertheless, we believe this kind of therapeutic method has the possibility to be an alternative treatment for patients with severe heart failure and without valid drug therapy.

In conclusion, cardiac SWT have the potential to be used as a new non-invasive angiogenic therapy for ischemic cardiomyopathy patients who suffer from chronic heart failure induced by myocardial ischemia who had no chance for revascularization.

Funding: This work was supported by the Shanghai Health and Family Planning Commission (No. 20164Y0036) and Young Investigator Fund of Zhongshan Hospital, Fudan University (No. 2016ZSQN05).