Atrial fibrillation (AF) is the most frequent cardiac arrhythmia and present in 0.4% of the general population (1). The risk of systemic embolization, cardiac morbidities and mortality are increased in the patients with AF (2,3). In patients undergoing off-pump coronary artery bypass grafting, postoperative AF could even cause delayed stroke (4). Anticoagulation therapy has been recommended for prevention of systemic embolization. However, the attitude for anticoagulation therapy for the patients with AF at peri-stroke period is rather conservative due to the concern regarding the late hemorrhagic complication (5). In the patients underwent mitral surgery, concomitant AF is present in as high as 50% of patients (6). Cox et al. developed Cox Maze procedure and successfully treated the patients with drug-refractory AF (7,8). Since the original maze procedure required extensive cut-and-saw in both atria, modified maze procedure using variable energy sources to achieve the ablative purpose were developed (9-14). However, the long-term results and predictors for late AF recurrence are still under investigation. This study investigated the long-term results and the predictive values for late AF recurrence in 207 consecutive patients after mitral surgery and radiofrequency (RF) maze procedure for persistent AF.

A single-center retrospective clinical database analysis of 207 consecutive patients who underwent the RF maze procedure for persistent AF concomitant to the mitral surgery from December 1995 to November 2011 was conducted. Associated procedures including tricuspid surgery, aortic valve surgery, and atrial septal defect closure were carried on 164 patients (Table 1). There were 106 female. The mean age was 54±12.4 (ranged from 21 to 81) years old. This study was approved by the Institutional Review Board of Chang Gung Medical Foundation (IRB number 201600911B0), and the need for written informed consent from the patients was waived.

The RF maze procedure was initially conducted with a handmade saline-irrigated quadripolar steerable electrode catheter (Mansfield, Watertown, MA, USA) and a RF generator (EPT-1000; EP Technologies, Inc., Sunnyvale, CA, USA) guided by direct visualization during the period when the commercialized surgical ablation device was not available. Subsequently, since May 2005, the same procedure was carried with Cardioblate Monopolar RF ablator (Medtronic, Parkway, MN, USA). This technique was described elsewhere in detail and has been demonstrated to create transmural and continuous lesions (12-14).

Both atrial and ventricular temporary pacing wires were employed in case of perioperative dysrhythmia. Cardiac rhythm was constantly monitored in the intensive care unit. In the general ward, a 12-lead electrocardiogram (ECG) was performed once each day and whenever subjective symptoms of dysrhythmias were noted. In contrast to other reports, any class I or III antiarrhythmics were not used in our practice in order to exclude chemical conversion. The patient was discharged after 2 weeks of heparinization. Persistent sinus restoration or spontaneous sinus conversion was considered as successful sinus conversion at discharge after 2 weeks of postoperative monitoring. Any atrial dysrhythmia was not converted either electrically or chemically during this period. Warfarin was administered in all patients and stopped 6 weeks later only in patients with successful sinus rhythm and atrial contraction restoration following reparative surgery or tissue valve replacement.

Cardiac rhythm and dimensions at follow-up

After hospital discharge, patients received monthly to trimonthly follow-up for medication adjustment, rhythm analysis, and chamber size evaluation with 12-lead ECG and two-dimensional echocardiogram. A 24-hour Holter ECG monitor was performed whenever symptoms or signs of dysrhythmia were noted or detected during the routine ECG and echocardiographic follow-up. M-mode measurements were performed following the recommendations of the American Society of Echocardiography for atrial dimensions (15). Atrial areas were measured by planimetry in a 4-chamber view. The maximum areas were the average of measurements over 5 beats. Early diastolic ventricular filling, filling by atrial contraction across the tricuspid and mitral valves, and total time-velocity integrals were recorded for analysis, as well.

Statistical analysis was performed using the Statistical Package for the Social Sciences for Windows software system, Version 22.0 (SPSS Inc., Chicago, IL, USA). Continuous variables acquired from the clinical characteristics were expressed as the mean ± standard deviation and were compared using the student t-test. The chi-squared test or Fisher’s exact test according to the number of events for variables appraised was used for comparisons made between categorical variables. Cox survival regression model was used to determine factors of AF recurrence after surgical ablation. Factors for which the univariable analysis gave a p value of less than 0.1 were included in the multivariable analysis. Hazard ratio (HR) and 95% confidence interval (CI) were calculated. Youden index (sensitivity + specificity − 1) of receiver operating characteristic (ROC) curve was calculated to find out the best cutoff values of persistent AF duration, preoperative left atrial (LA) diameter and preoperative right atrial (RA) area to predict late AF recurrence. Sensitivity, specificity and accuracy were investigated by the Fisher’s exact test. Survival curves for the incidence of AF recurrence by persistent AF duration, preoperative LA diameter, and preoperative RA area were calculated with the Kaplan-Meier method and a log-rank test was used to assess the statistical significance. A two-tailed probability value of less than 0.05 was considered statistically significant.

Among the 207 patients, there were 8 in-hospital deaths (3.9%). The remaining 199 patients including 109 rheumatic and 90 degenerative patients were divided into success sinus restoration (success, n=154) and failed sinus restoration (failure, n=45) groups according to the rhythm at discharge after 2 weeks of postoperative continuous monitoring (Table 1). The follow-up was 100% complete. During the mean follow-up period of 101±50.9 months, stroke was documented in 3 patients (1.4%), 8 patients (3.9%) developed sick sinus syndrome and received dual chamber permanent pacemaker implantation. There was no any sustained atrial arrhythmia documented over the whole course till the last follow-up of this study in 154 of 207 patients (74.4%). There were no complications associated with the RF maze procedure. The Failure group had longer persistent AF duration, worse preoperative New York Heart Association functional class, larger preoperative LA diameter, poorer left ventricular ejection fraction, larger preoperative left ventricular end systolic and end diastolic diameters. Late mortality occurred in 17 patients (8.2%). In these 17 patients, 13 patients (76.5%) restored sinus rhythm. 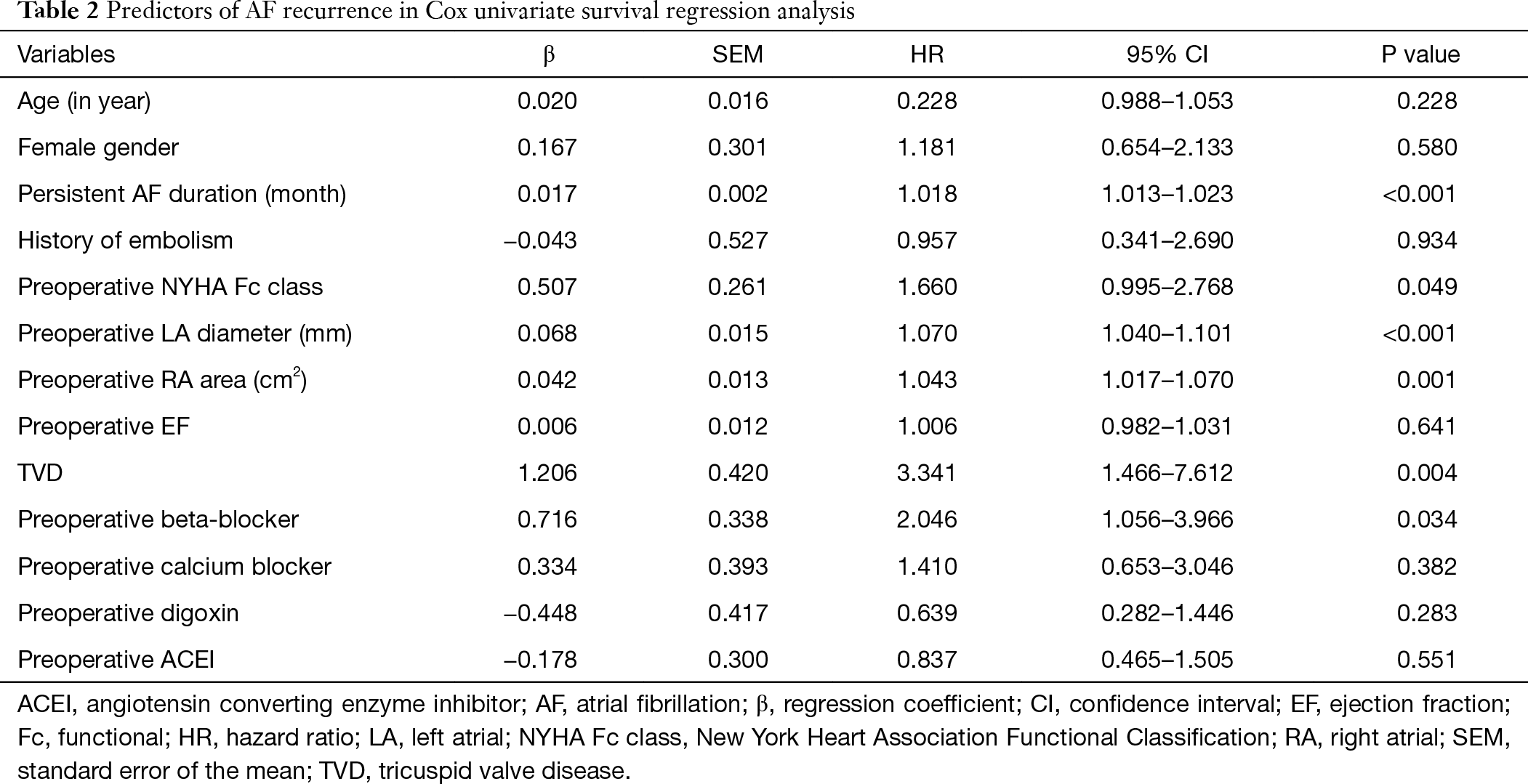 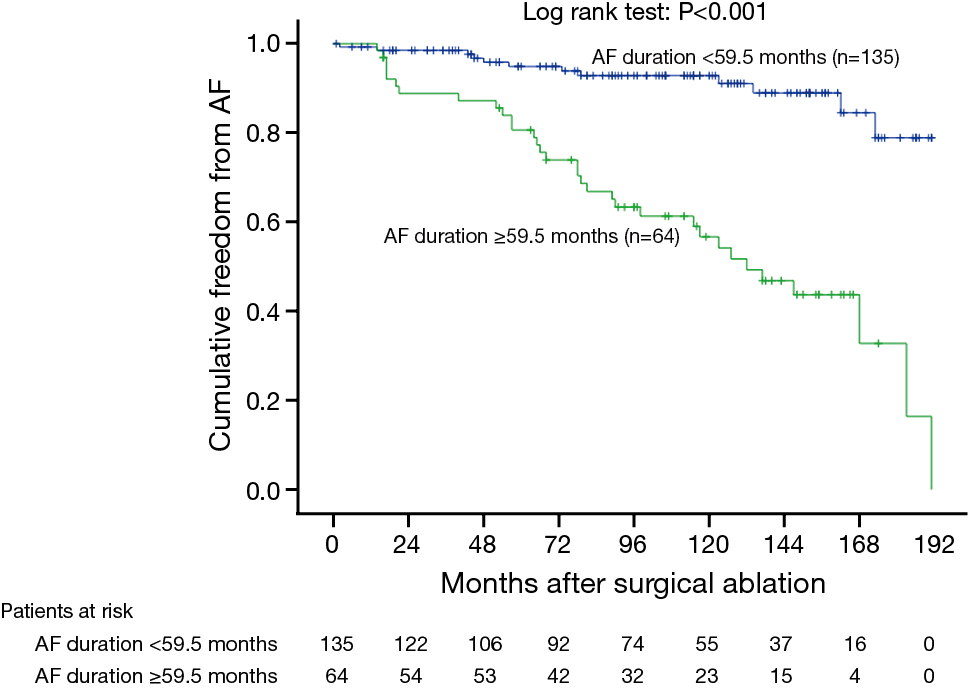 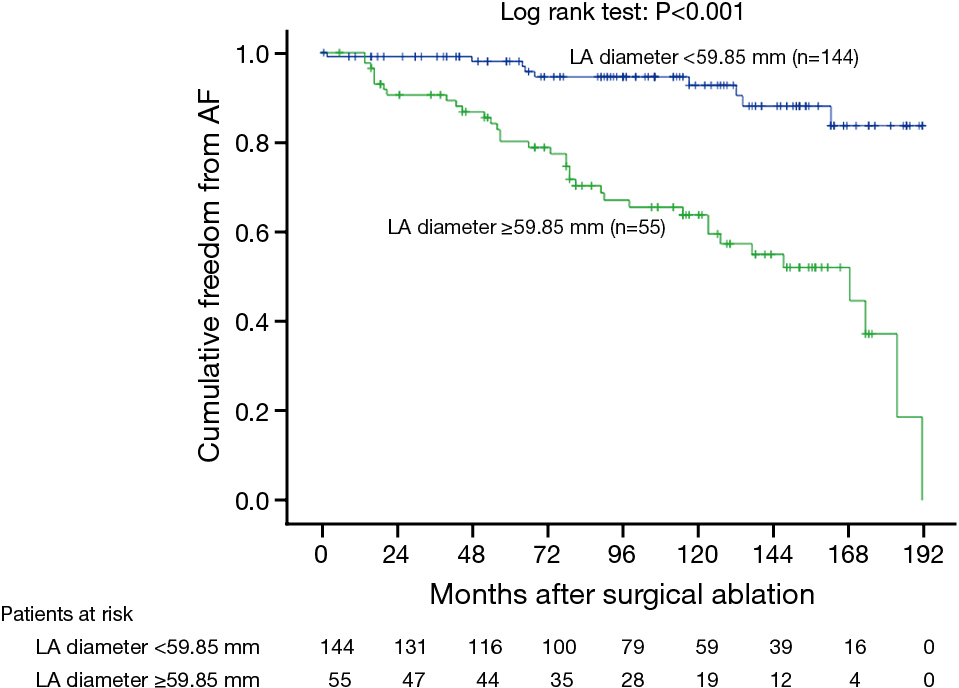 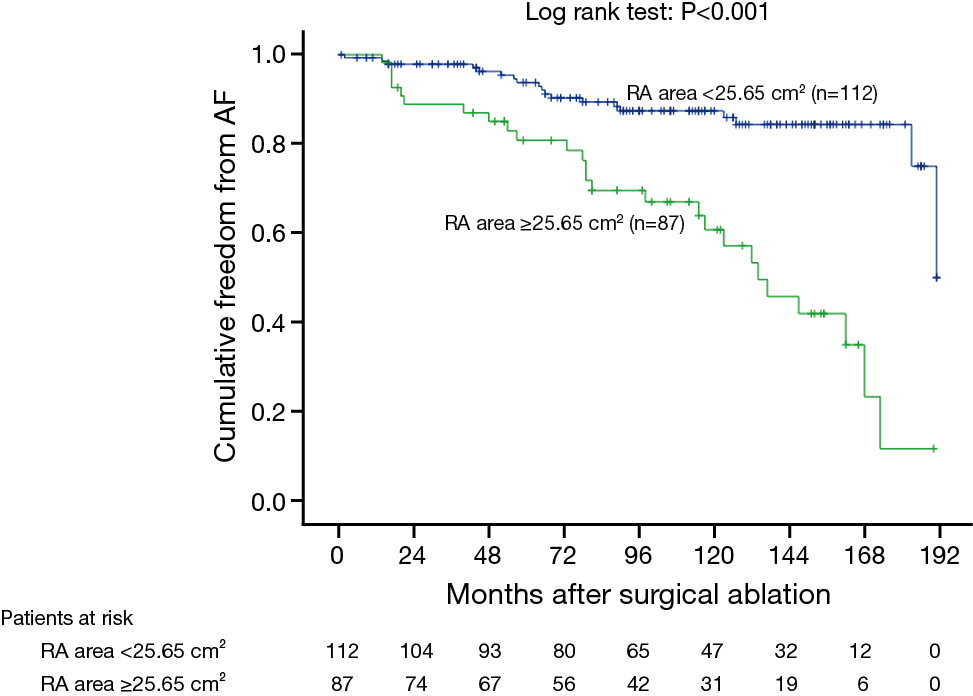 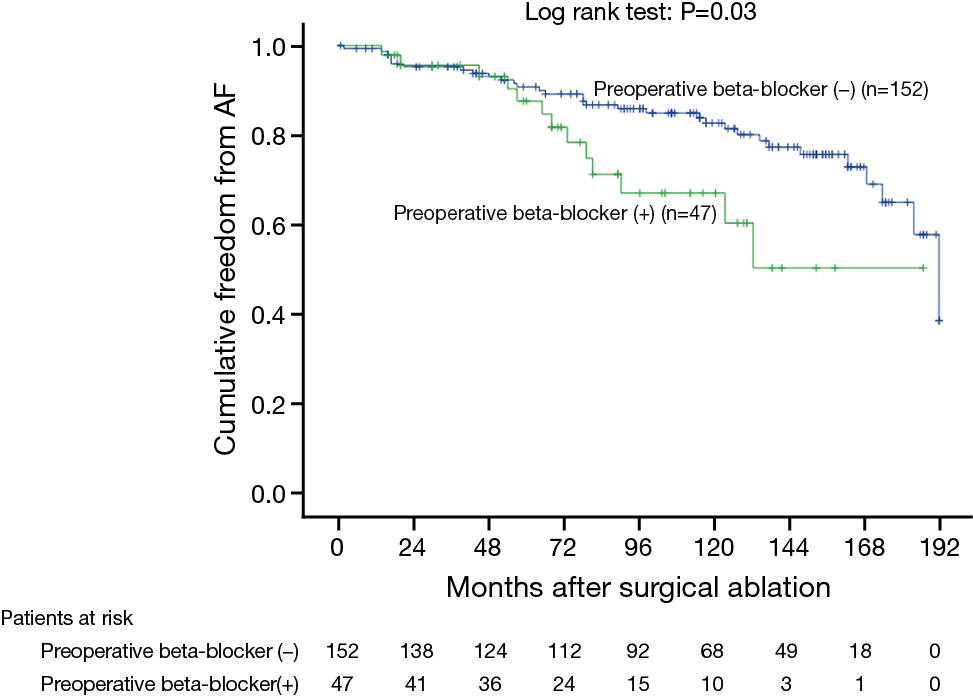 Currently, catheter ablation of paroxysmal or persistent AF is a common practice although the primary success rate even including the recent state-of-art technology of cryoballoon could only achieve 60% at 12 months and this could be improved to 76.9% after repetitive procedures (16). In contrast, we demonstrated the primary success rate of 74.4% in a cohort of mitral disease with persistent AF during follow-up period of 101±50.9 months by RF maze procedure with concomitant mitral surgery. Similarly, in a case-matched comparison of catheter-based techniques and Cox-Maze III operation conducted by Stulak et al., the superiority of surgical ablation including better free of AF, less antiarrhythmics and anticoagulation use were reported (17). Several catheter ablation related adverse events like pulmonary vein stenosis, esophageal injury, and cardiac perforation related tamponade were all well-known complications. In between, pulmonary vein stenosis is a serious issue which may require later catheter intervention or even pulmonary resection procedures. In addition, 3% of vascular access complication was not negligible (17). These complications were seldom reported in the surgical ablation groups.

Various energy sources including RF, microwave, high-intensity focused ultrasound, and cryothermia have been introduced to replace the conventional cut-and-saw maze procedure (18-20). These modifications made the AF ablation safer and easier resulted in versatile concomitant application of surgical AF ablation in various cardiac procedures, especially in mitral surgery. In this study, RF ablation was performed using a monopolar RF ablator delivering a continuous, quasi-sinusoidal, unmodulated RF output at 500 kHz. During the point-to-point ablation, saline irrigation was used continuously and transmural discoloration of each lesion was confirmed to ascertain the adequate continuity and depth of the ablation line. As an adjunction, cryoablative lesions were also made at some particular anatomical sites (12). By this monopolar saline irrigated RF maze procedure, we achieved the results of 2.9% of the 30-day mortality, 3.9% of the in-hospital mortality, 1.4% of stroke rate, and 3.9% of permanent pacer implantation rate. These results are comparable to that of the current state-of-art results reported as 4.4% of 30-day mortality, 5.5% of stroke rate, and 7.0% of permanent pacer implantation rate (21).

The incidence of AF increased in the patients indicated for cardiac surgery and AF was also reported to be a significant risk factor of surgical mortality (22-23). Therefore, concomitant AF ablation was inferred and justified for reducing the mortality and improving the quality of life. However, it is noteworthy that concomitant AF ablation in different cardiac surgeries demonstrated heterogeneous outcomes. According the report from Budera et al., mitral surgery showed superior benefit than coronary and aortic valve surgeries (24).

Another issue regarding the heterogeneity of RF ablation is the adoption of different device, technique, and lesion set which inevitably resulted in varied outcomes. The transmurality and continuity of lesions are important but tricky terms without objective consensus. The “ablation factors” including delivered energy, ablation duration, lesion set, lesion depth, lesion width, and even saline irrigation amount are all varied between operators. Consequently, the results of RF maze procedure varied between surgeons. In our practice, we standardize the procedure by creating the point to point continuous RF lesions with precise protocol regarding the “ablation factors” to achieve the consistent ablation result as possible (12-14). Certainly, a method for real-time confirmation of complete conduction block between the RF lesions in a beating heart is the most demanding facility for refinement of the RF maze procedure.

Gillinov et al. reported a greater incidence of pacemaker implantation in ablation group mostly for the heart block and sinus node dysfunction compared to mitral surgery alone group (25). Aggressive implantation strategies have been advocated for atypical bradydysrhythmias in rheumatic population after AF ablation (26,27). In contrast, high degree atrioventricular block or bundle branch block was considered as the indication in different studies (28,29). In our study, high degree atrioventricular block was seldom occurred and the permanent pacemaker implantation rate was low for the sinoatrial node sparing lesion set was adopted in our practice (13).

In the surgical group, obliteration of LA appendage and LA thrombectomy could be performed effectively. In addition, surgical ablation also achieved superior long-term sinus restoration. These surgical advantages might reflect on the observations made by Boersma et al. that lower incidence of stroke and thrombus formation were noted in the surgical ablation group than catheter ablation group at 12-month follow-up (30). In our practice, after routine 6-week of anticoagulation therapy, warfarin was discontinued if sinus rhythm had been restored in patients after successful valvular repair or bioprosthetic replacement. During the mean follow-up period of 101±50.9 months, stroke was documented in only 3 patients (1.4%; 2 in failure group).

The nature of retrospective, non-randomized, and heterogeneity of this study constitutes the inevitable weakness. Although, this cohort might demonstrate one of the longest follow-up studies in a significant number of patients, a larger prospective randomized study is mandatory for determining the best lesion set and predicting the precise risk factors of AF recurrence. Although we demonstrated that the longer persistent AF duration, larger preoperative LA diameter, larger preoperative RA area and preoperative beta-blocker use were the predictors for negative long-term outcome of RF maze procedure for the patients with persistent AF, we cannot propose the solution to improve the sinus conversion rate in patients with those negative predictors. Lack of modality to document the continuous heart rhythm is the universal weakness in dysrhythmia study. Rapid refinement of portable electronic device for continuous monitoring of heart rhythm will circumvent this predicament in the near future.

Ethical Statement: This study was approved by the Institutional Review Board of Chang Gung Medical Foundation (IRB number 201600911B0), and the need for written informed consent from the patients was waived.