Pulmonary hypertension (PH) is defined by a mean pulmonary artery pressure (PAPm) ≥25 mmHg at rest as assessed by right heart catheterization (RHC) (1). Clinical classification of PH includes five groups: pulmonary arterial hypertension (PAH), PH due to left heart disease, PH due to lung diseases and/or hypoxemia, chronic thromboembolic PH, and PH with unclear and/or multifactorial mechanism. PH is categorized according to clinical presentation, pathological findings, hemodynamic significances, and treatment strategy (2). It is important to identify PH etiology as several etiologies, as shown, can be progressive and fatal if untreated. This case describes a young woman who presented with acute onset dyspnea due to right heart failure and anemia. Diagnostic tests for the secondary causes were negative, including congenital intra-cardiac shunts, left-sided heart diseases, lung diseases, including hypoxemia and pulmonary thromboembolism, collagen vascular disease, HIV infection, and hyperthyroidism. She did not take any drugs or toxins that could lead to PH. The possible etiologies of PH in our case were idiopathic PAH (Class I) or unclear multifocal mechanisms (Class 5). Anemia was the initial finding of pancytopenia that later occurred in this patient due to mild splenomegaly, which was suspected to be caused by a viral illness. After correction of anemia and supportive treatment, PH and right side heart failure were also improved. Therefore, we report a case of a reversible PH due to possibly unclear multifactorial mechanisms associated with a viral infection. We also report a review of the literature. 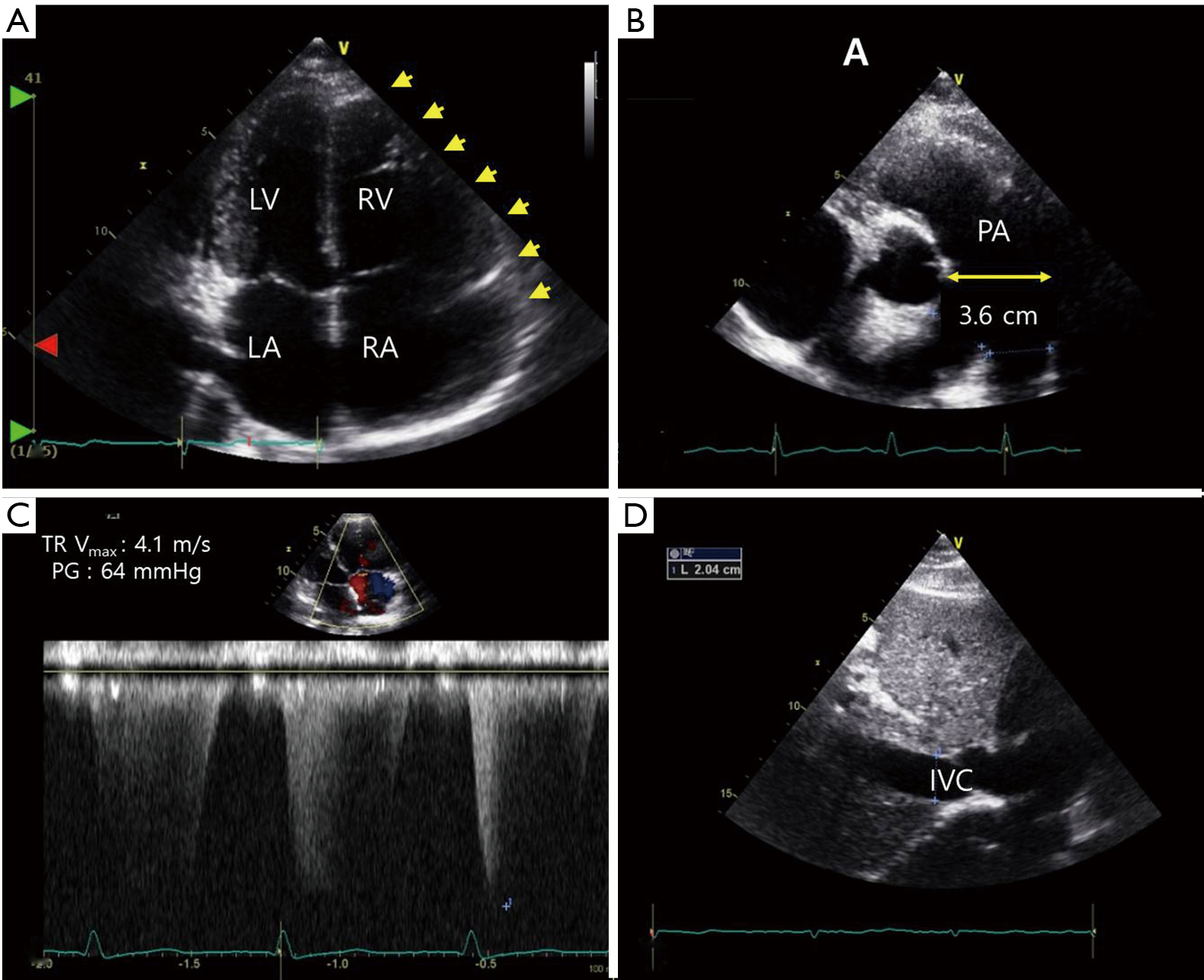 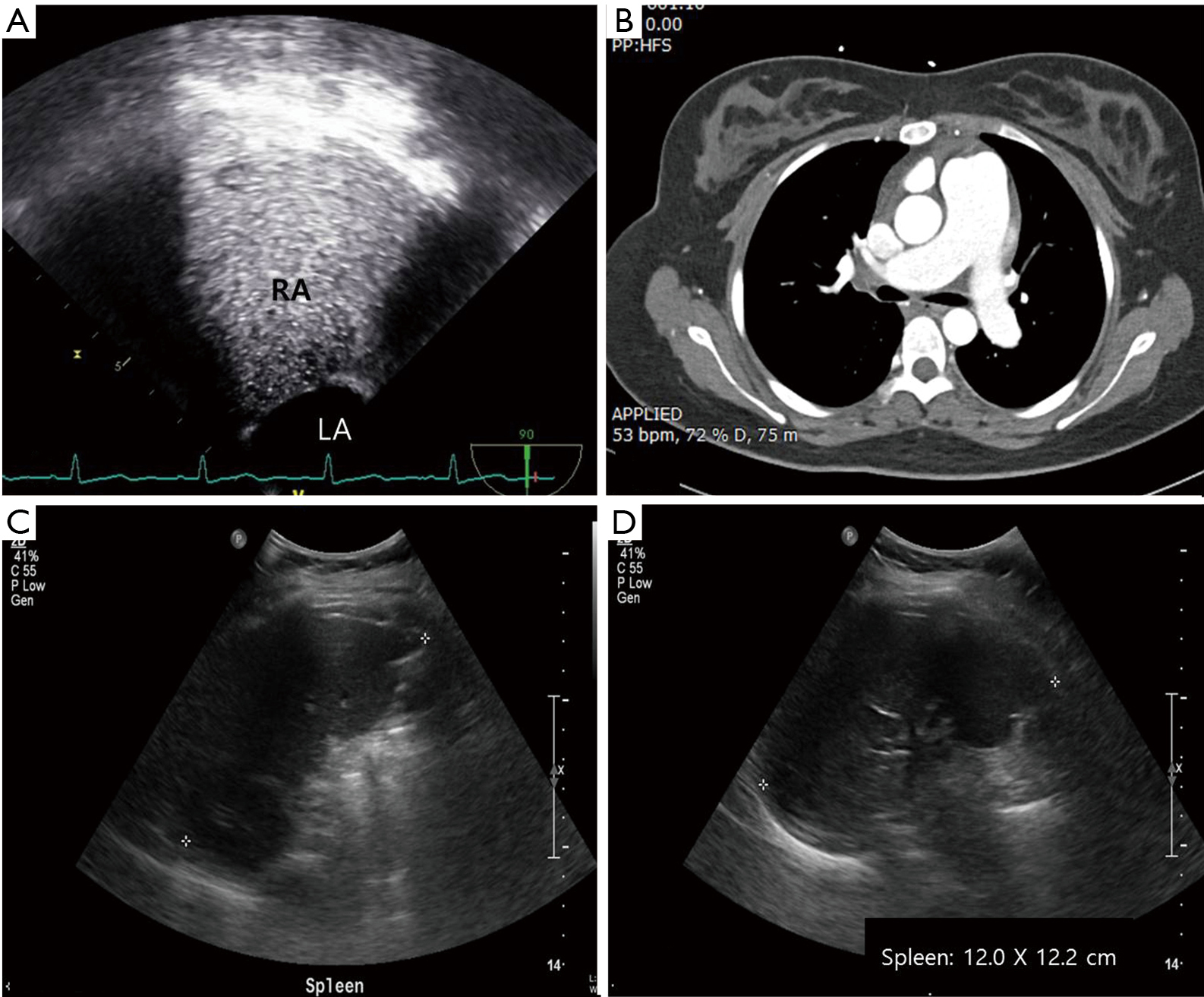 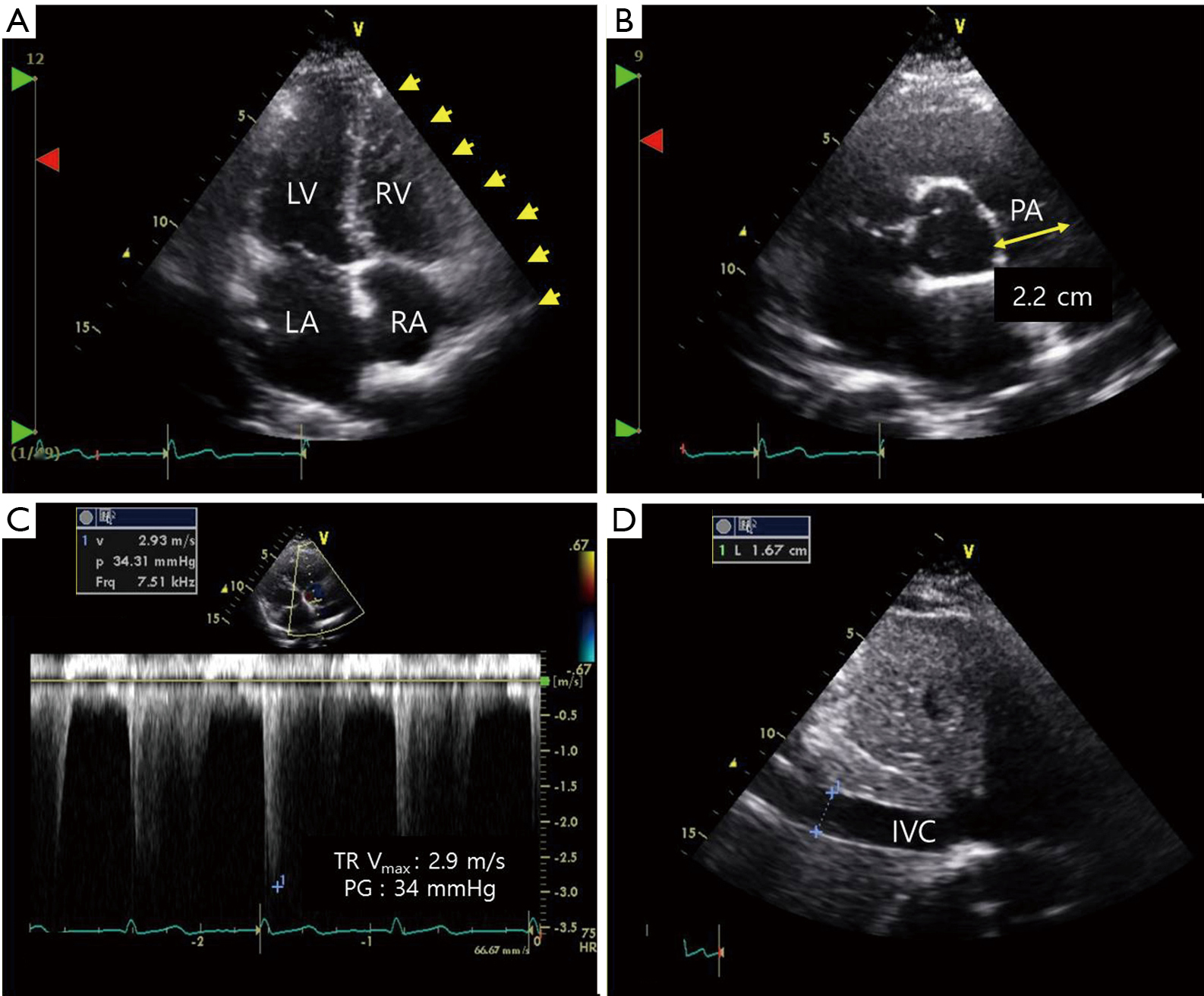 Our patient had a reversible PH with unknown etiology associated with pancytopenia caused by splenomegaly in the clinical setting of viral infection. There were some case reports of reversible PH in association with hyperthyroidism (5,6) and vitamin C deficiency (7). Adverse cardiovascular effects of hyperthyroidism are well established. High output biventricular heart failure is common (8), but also isolated right heart failure with variable degrees of TR and PH is less frequently reported. However, our patient showed normal thyroid function and she did not have any signs of vitamin C deficiency. She was a previously healthy young student with slightly overweight who had regular, heathy diet. Intra-cardiac shunt and other possible adult congenital heart diseases were excluded by TEE and agitated saline. Even though we did not perform lung perfusion scan, chronic thromboembolic PH and other PA obstructions could be excluded by chest computed tomography and normal arterial blood gas analysis showed normal arterial oxygen. In addition, connective tissue disease or HIV infection were not possible in this case. PH is defined as an increase in PAPm 25 mmHg at rest assessed by RHC, and pulmonary capillary wedge pressure (PCWP) is needed to classify pre-capillary or post-capillary PH (1). In the present case, the patient was a young women and it was a major limitation that she refused RHC because of fear of the invasive test. However, Doppler echocardiographic measurement of systolic PAP using TR peak velocity, estimated RA pressure, and modified Bernoulli equation in the absence of pulmonary flow obstruction is a reliable method (9). In addition, if LV systolic or diastolic dysfunction, left atrial enlargement, E/E; ratio >15, or valvular disease exist, post capillary PH must be suspected (9). In this case, TTE showed normal left cardiac size and function (EF: 65%, E/E’: 4). Therefore, PH due to other causes could be excluded for our patient.

The patient with splenomegaly gives a diagnostic challenge to a wide variety of clinicians, because conditions associated with splenomegaly are extensive (10). Splenomegaly can be defined as increased size of the spleen on the ultrasound exam (11). Craniocaudal length is most often used to measure splenic size, and its upper normal limit varies from 11 to 14 cm (12). Her spleen size measured by ultrasound was 12 cm, which means borderline enlarged spleen when considering her short height (147 cm). The spleen was not palpable on physical examination but clinical presentation (history of URI, initially anemia, and later pancytopenia) was the clue for splenomegaly. Her symptoms were improved and she recovered from pancytopenia. We did not perform bone marrow biopsy. Some viral infections such as HIV, human herpesvirus-8, hepatitis B and C, are associated with angioproliferation and the development of PH (13). Serum viral marker tests were performed to examine if any of above mentioned viral infections were present in this patient, but the results were all negative.

Our patient had very unique presentation of reversible PH with unknown etiology associated with acute viral infection and transient pancytopenia. Here we are reporting our clinical findings and reviewing the literatures.