Tetralogy of Fallot (TOF) is the most common cyanotic congenital heart defect, and its surgical outcomes had been dramatically improved due to modern surgical and medical advances. The majority of post-repaired patients survive and reach adulthood, although some patients are at risk of several life-threatening complications, such as arrhythmia and sudden cardiac death (SCD) (1,2). Numerous reports have identified risk factors for ventricular tachyarrhythmia, including QRS duration, change rate of QRS duration, QTc duration, delay in corrective surgery, number of previous cardiac surgery, presence of ventriculotomy, trans-annular patch (TAP) repair, and left ventricular diastolic dysfunction (3-7). Those risk factors probably differ between institutions and countries, since the age at corrective surgery after palliative operation and operative procedure (incidence of TAP repair and size of the right ventriculotomy) might differ between them. The purpose of this study was to evaluate the long-term outcomes of total repair of TOF and to identify risk factors for ventricular tachyarrhythmia and SCD.

Our institutional review board/ethical committee approved this retrospective study, and the need for informed consent was waived. Between 1964 and 2014, 415 patients underwent total repair for TOF at Niigata University Medical and Dental Hospital. Cases associated with pulmonary atresia, atrioventricular septal defect; absent pulmonary valve syndrome and major aortopulmonary collateral artery were excluded. Of the 415 patients, we retrospectively reviewed case histories of 89 patients who underwent repair of TOF and who were followed for more than 10 years in our institute. Forty patients (45%) were women. Mean age at the time of TOF repair was 4.4 years (range, 2 to 27 years), mean follow-up period was 24.3 years (range, 10 to 47 years), and a total of 2,163 patient-years were assessed. Thirty-three patients (37%) had previously undergone palliative procedures before complete repair for TOF. Type of TOF repair was TAP repair in 53 (60%), trans-right ventriculotomy (RV-tomy) in 35 (39%) and trans-right atrial and pulmonary artery repair (RAPA) in 1 (1%) patient. Patient characteristics are summarized in Tables 1,2. 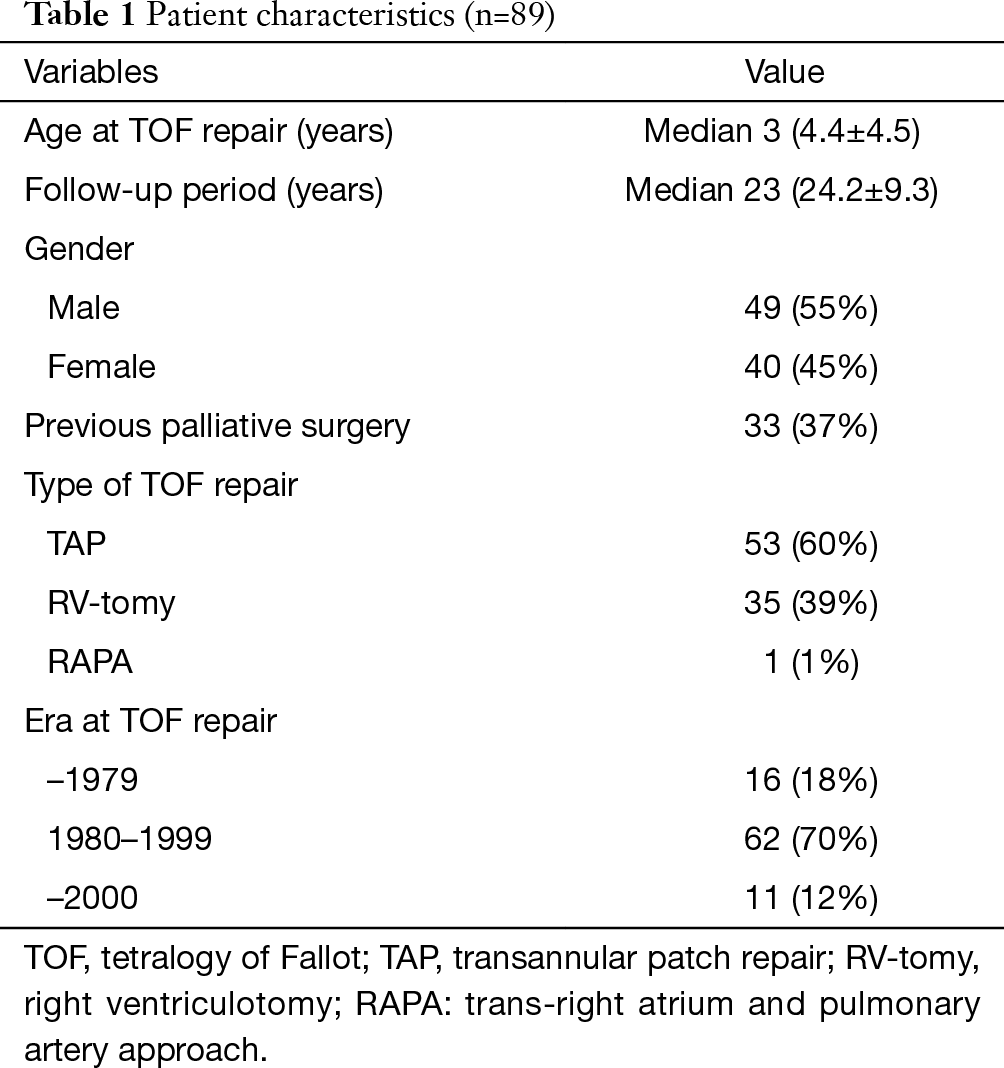 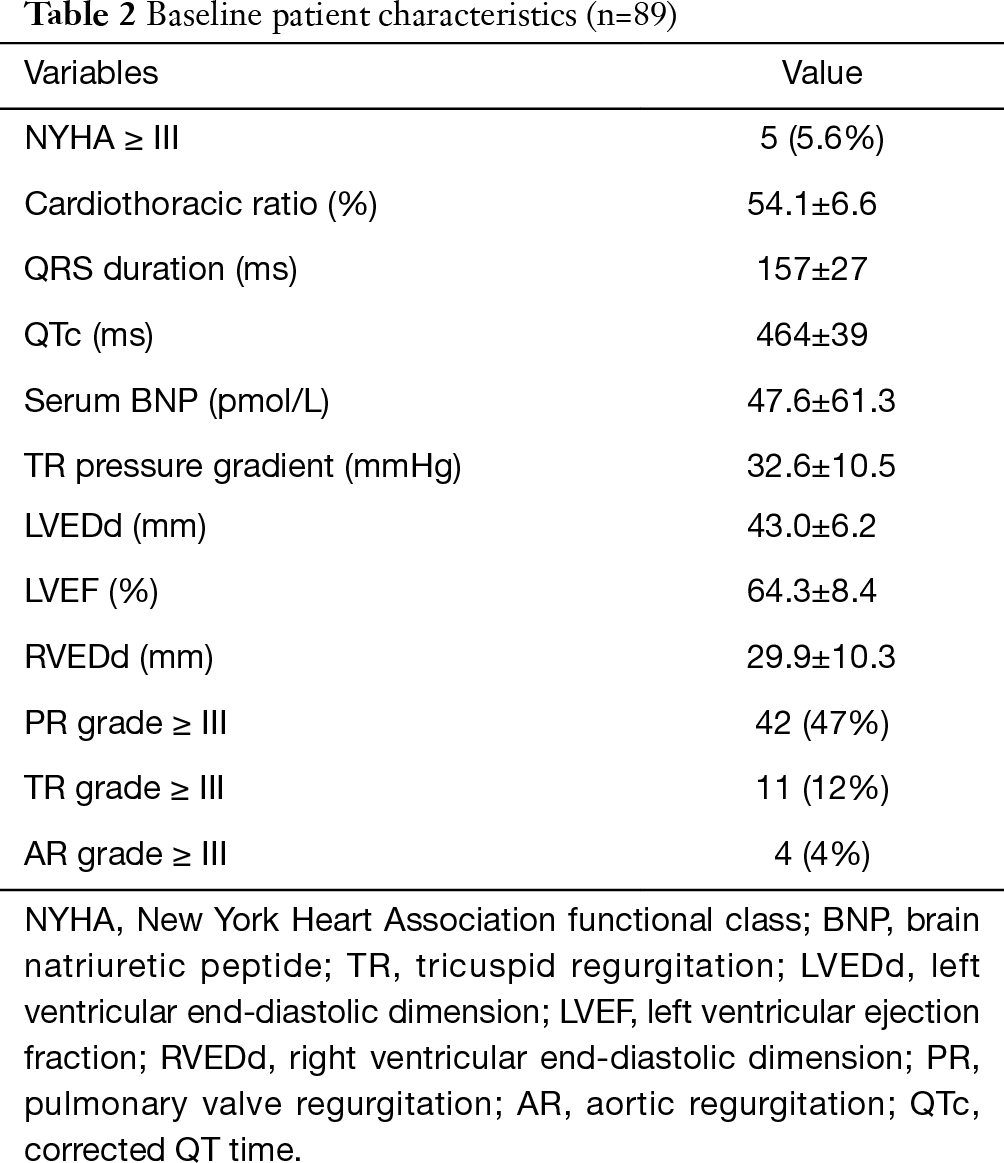 Demographic variables, surgical records, current status and information about arrhythmia were obtained from the hospital records and clinical visits. Detected ventricular tachyarrhythmia [sustained ventricular tachycardia (VT) and ventricular fibrillation (VF)] and SCD were the primary endpoints of this study. If a patient with previous detected ventricular tachyarrhythmia suddenly died, the patient was classified as having SCD. Electrocardiography (ECG) measurement of maximum QRS duration and corrected QT duration was analyzed manually from standard (25 mm/s and 1 mV/cm) 12-lead sinus ECG. Change rate of QRS duration during the study was calculated as the absolute change of the maximum QRS duration divided by the number of observed years. Cardiothoracic ratio from the posteroanterior chest radiograph was used as an estimate of cardiac size. The right ventricular systolic pressure (calculated from the velocity of the tricuspid regurgitation), peak instantaneous systolic pressure gradient across the right ventricular outflow tract (RVOT), end-diastolic dimension of the right and left ventricle (RVEDd and LVEDd), left ventricular ejection fraction and severity of tricuspid, pulmonary and aortic regurgitation were recorded from echocardiogram.

Data are expressed as mean ± standard deviation for normally distributed continuous variables or as median for skewed continuous variables, according to the Shapiro-Wilk test. Testing for differences in demographic and clinical data was accomplished using the unpaired Student t-test, Mann-Whitney’s U-test or Kruskal-Wallis test for continuous variables and using Fisher’s exact test for categorical variables, as appropriate. The Kaplan-Meier method was used to analyze long-term survival and freedom from late arrhythmia. Statistical significance was defined as P<0.05. Multiple logistic regression analysis was used to identify risk factors for VT and fibrillation and SCD. Variables with a value of P<0.1 by univariate analysis were entered into a multiple logistic analysis model. Statistical analysis was done using SPSS statistical software (Version 16.0, SPSS, Inc., Chicago, IL, USA).

The overall survival rate at 20, 30 and 40 years was 100%, 94.6%, 94.6%, respectively. Three patients (3.4%) died in the late period (due to cerebral hemorrhage in 1 patient, due to SCD in 2 patients). Surgical re-intervention was performed in 8 patients (9.0%), including pulmonary valve replacement or RVOT procedure in 4 patients, aortic valve replacement in 2 patients, tricuspid valve surgery in 1 patient, and coronary artery bypass grafting in 1 patient. 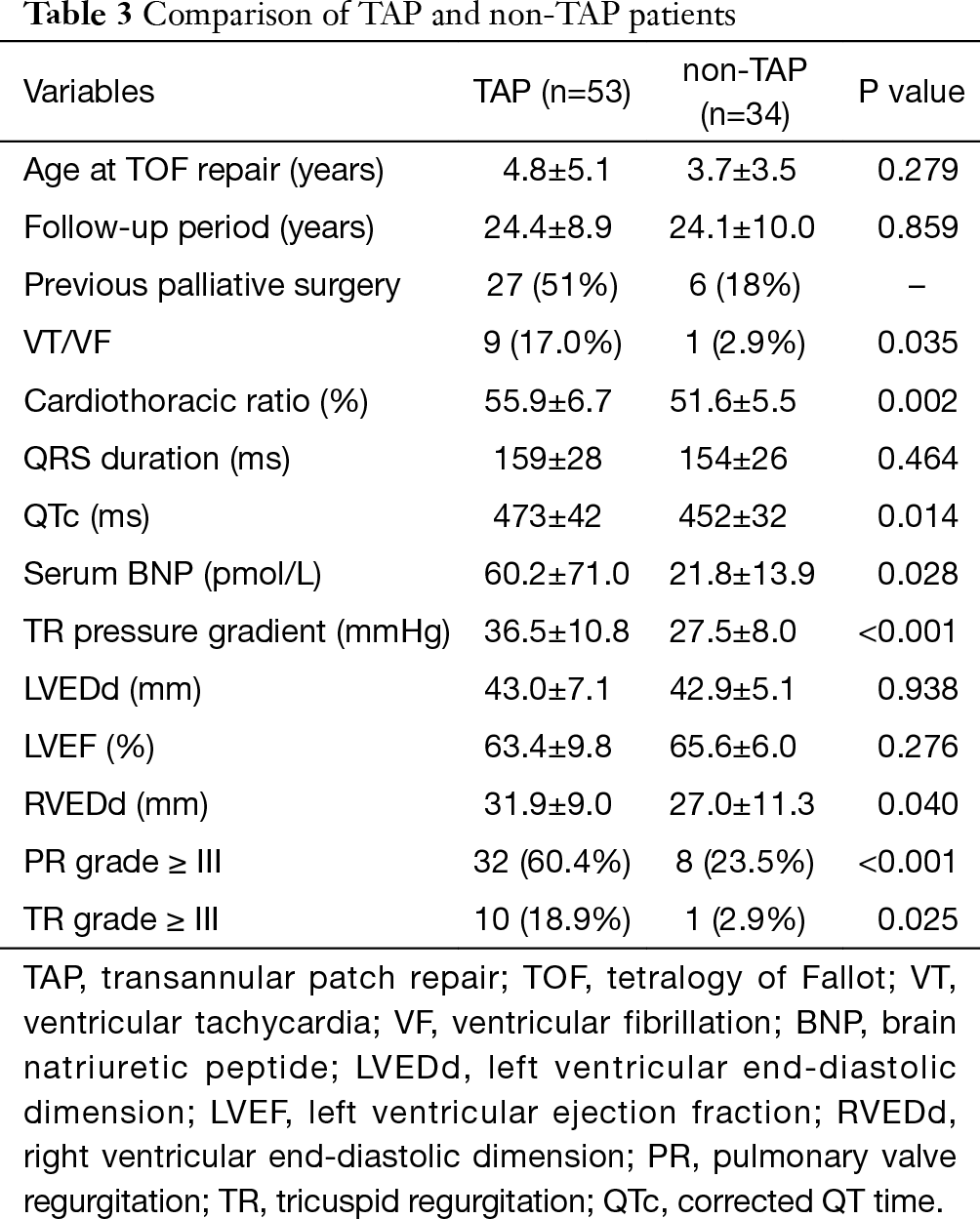 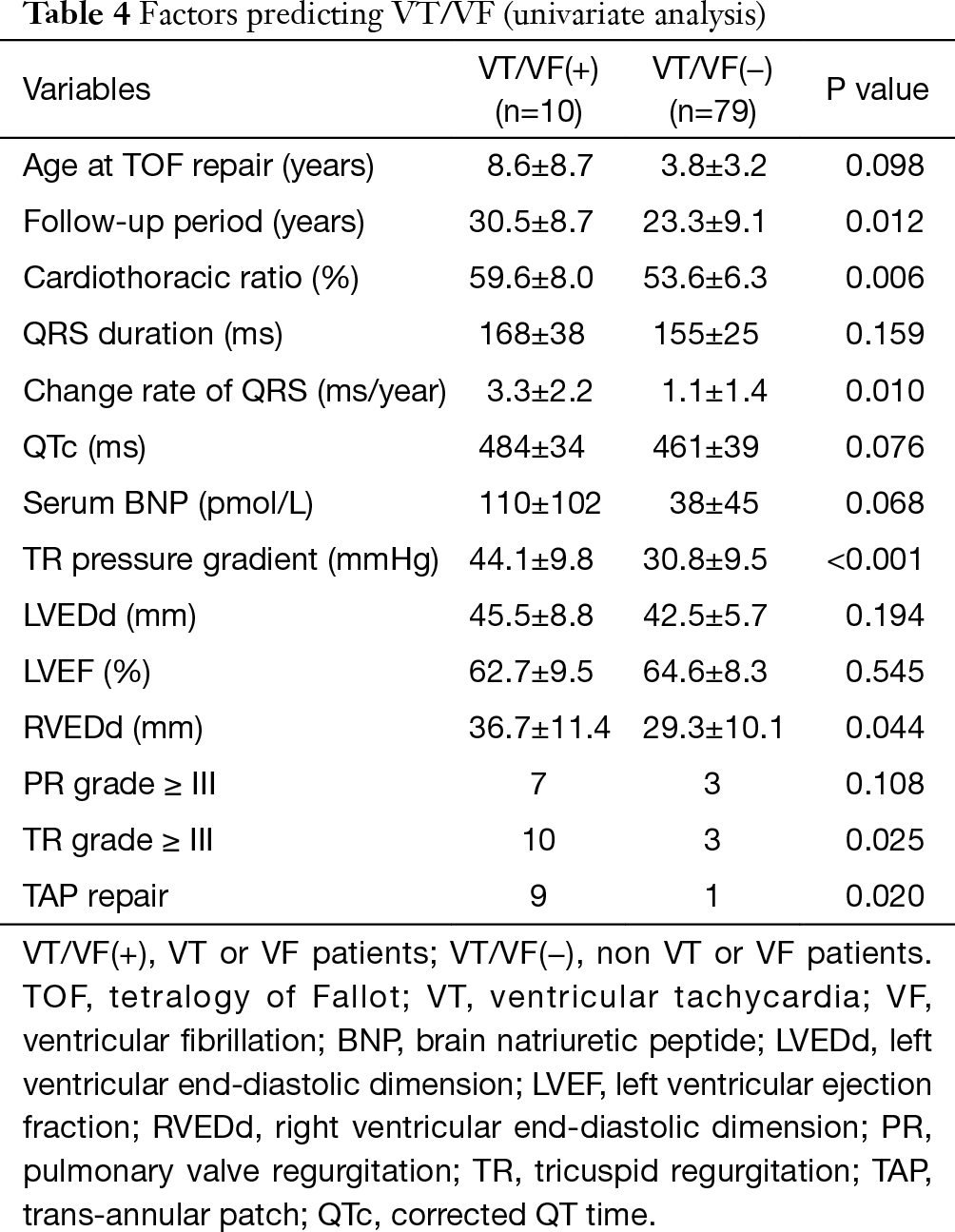 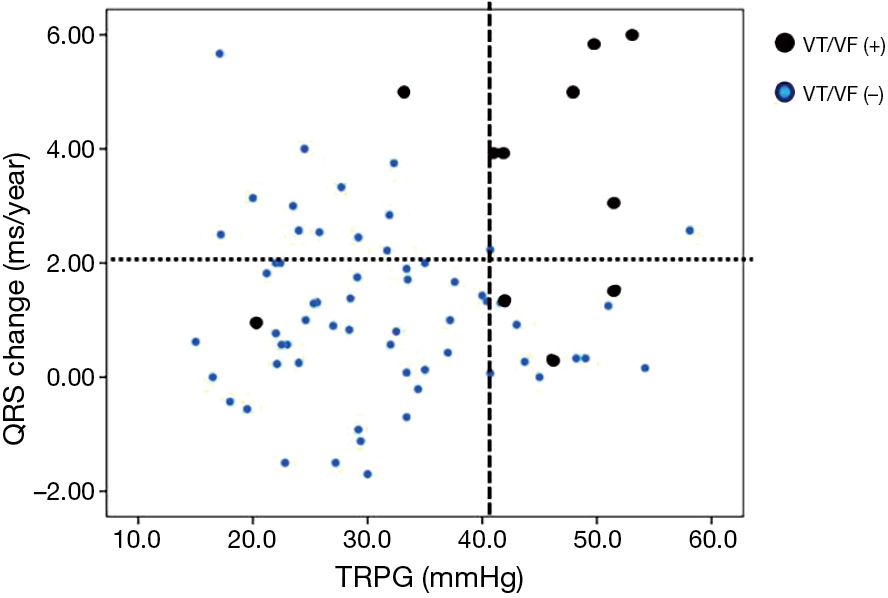 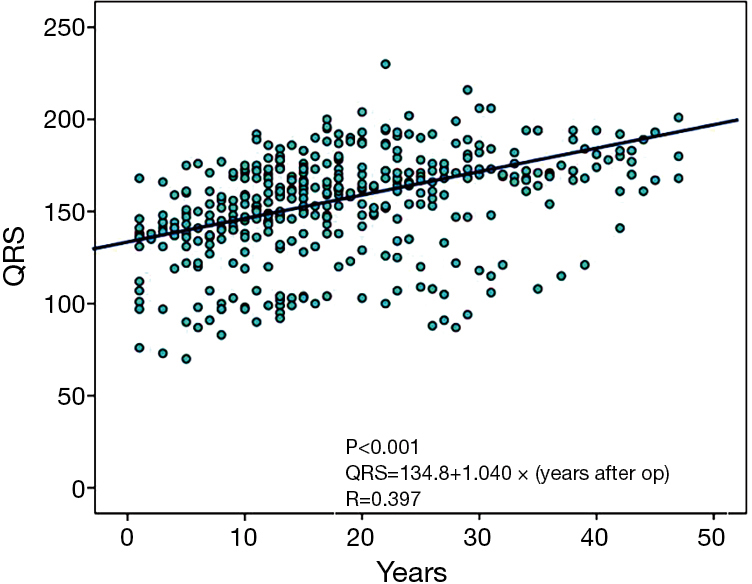 Figure 3 Correlation between the change rate of QRS duration and follow-up period after TOF repair. TOF, tetralogy of Fallot.

Although the long-term outcomes and quality of life of patients who have undergone TOF repair have improved in the recent era, the survival rate is not still the same as for age- and sex-matched controls, mainly because of the risk of ventricular tachyarrhythmias and SCD in the late period (2,8,9). The incidence of SCD was reported to be between 1.5 and 4.5 per 1,000 patient years, SCD tends to occur at more than 4 years after TOF repair. Ventricular ectopic contractions occur in 19% in surgically managed TOF patients and are associated with an increase in the rate of SCD (10). Therefore, identification of patients who are at high-risk patients for life-threatening arrhythmias, and adequate prevention and treatment (including pulmonary valve replacement, electrophysiological ablation and implantable defibrillators) for these patients is crucial.

Various studies have identified risk factors for SCD and ventricular arrhythmias. Having a diagnosis of TOF in itself is a risk factor for SCD, because SCD occurs more frequently in patients with TOF who do not undergo surgical repair (11). Older age at TOF repair is a strong risk factor for SCD and VT (11). Numerous reports had demonstrated that a past history of palliative surgery and TAP repair are risk factors for SCD. A right ventricular incision is also associated with high risk of ventricular arrhythmia and SCD, since the site of surgical scar is believed to provide a substrate for abnormalities of depolarization and repolarization of the myocardium. Some investigators have described a relationship between ventricular tachyarrhythmias and right ventricular dilatation due to chronic volume load by means of PR. Furthermore, several ECG parameters, including QRS duration, change rate of QRS duration, QT/JT duration and dispersion, heart rate variability, and fragmented QRS, have been recognized as risk factors for life threatening ventricular arrhythmias and SCD (1,4,6,7,12,13). Residual cardiac lesions or hemodynamic abnormalities are associated with late SCD, including elevated RV pressure due to RVOT obstruction or pulmonary artery stenosis, right ventricular volume load, right ventricular dysfunction, left ventricular longitudinal dysfunction, and left ventricular diastolic dysfunction (5,14). Despite these studies, no single risk factor has yet been identified to predict VT and SCD in patients who have undergone TOF repair.

Some investigators have concluded that TAP repair is a risk factor for late RV dilatation, ventricular arrhythmias and SCD in patients who have undergone repair of TOF (15,16). TAP repair provides excellent relief of the RVOT obstruction in TOF patients, but it can results in PR. In fact, excess enlargement of the RVOT may cause a significant amount of the PR. However, some investigators demonstrated that TAP repair in itself does not result in a worse late functional outcome than other types of repair in which the RV incision is limited to the ventricle (17). Those investigators argue that both TAP repair and RV-tomy repair are responsible for a similar degree of long-term PR and the same degree of the RV dilatation. In the present study, the incidence of VT and SCD was higher in TAP patients, but TAP repair was not recognized as a predictive factor for VT and SCD within multivariate analysis.

Prolonged QRS duration is closely related to PR and cardiac size, especially in the context of RV dilatation, and it is one of the most important risk factors for VT/VF and SCD in patients who have undergone TOF repair (1,4,7). Prolongation of QRS duration on ECG is frequently recognized after TOF repair, due to surgical injury of the myocardium, right bundle branch block immediately after corrective surgery, and right ventricular dilation caused by volume overload from pulmonary or tricuspid valve regurgitation late after repair (3,18). Therefore, QRS duration is affected by both early and late factors and is probably determined by type of surgical intervention. If complete right bundle branch block (CRBBB) or relatively large RV scarring occurred at the time of TOF repair without significant postoperative PR, the QRS duration would be prolonged, but right ventricular dilatation would not progress. In such cases, life threatening ventricular arrhythmias in the late period is rare. By contrast, if QRS duration was not significantly prolonged with a large amount of PR after TOF repair, late RV dilatation would cause prolongation of QRS duration and probably induce VT/VF. Based on these data, the change rate of QRS duration is believed to be more sensitive and to be a predictive risk factor for VT/VF when compared with the absolute QRS duration. These findings could differ according to the treating center, since the size of RV-tomy and the incidence of CRBBB might differ among institutes and different surgeons. Further, surgical techniques may differ among different hospitals, especially with regard to differences in the range of ventricular incision and muscle resection of the RVOT.

Elevated right ventricular pressure is a cause of fatal ventricular arrhythmias late after TOF repair in some studies. A previous study revealed that RV systolic pressure more than 60 mmHg is a risk factor for ventricular arrhythmias and that residual RV to PA outflow gradient of more than 40 mmHg is a risk factor of SCD (19). However, other investigators suggest that the residual pressure load of RV is not a risk factor for SCD, and some studies have demonstrated that adequate RVOT obstruction might be advantageous against PR (20). It is still controversial whether or not elevated RV pressure is a risk factor for SCD. The TR pressure gradient is thought to be more sensitive for elevated RV systolic pressure than flow velocity at RVOT, since the obstruction might occur at a more distal point than the RVOT (e.g., distal pulmonary artery stenosis), and this variable was also recognized as a predictive risk factor for late VT/VF in patinets with repaired TOF.

Gatzoulis et al. reported that moderate-to-severe pulmonary insufficiency combined with right ventricular outflow obstruction is a risk factor for SCD or life threatening ventricular arrhythmias late after TOF repair (3). In the present study, the combination of rapid change in the QRS duration and higher-pressure gradient at tricuspid regurgitation was strongly related to late arrhythmia and SCD. In other words, the combination of pressure load and volume load of the right ventricle may be used to predict the risk of SCD and VT/VF and may be more powerful for this purpose than the use of either factor alone. Therefore, if adequate surgical or catheter intervention for patients complicated with combination of pressure and volume load for the RV, the risk of late VT/VF could be decreased in patients with repaired TOF.

This study has several limitations. This study was retrospective, and the surgical technique varied during the study period. Holter ECG was done in only a small portion of the patient cohort, and arrhythmias were diagnosed by standard 12-lead ECG performed at an outpatient clinic. Clinical data was only collected from patients who survived a pre-specified amount of time. Furthermore, this study did not include all patients during the study period, and a relatively large number of patients did not satisfy the follow-up duration criteria needed for inclusion in this study because some patients were followed by other hospitals or they were lost to follow-up. However, we believed that these factors did not significantly affect the results of this study.

The combination of larger change rate of QRS duration and higher-pressure gradient at tricuspid regurgitation is a risk factor for ventricular tachyarrhythmias and SCD late after TOF repair. Adequate surgical or catheter intervention for pressure and volume load in the right ventricle might decrease the incidence of VT/VF and SCD.

Ethical Statement: Niigata University Ethics Committee (No. 2017-0250) approved this retrospective study, and the need for informed consent was waived.