The treatment of esophageal cancer has undergone important medical and surgical changes over the past several decades. For patients with locally advanced esophageal cancer, induction chemoradiotherapy followed by esophagectomy combined with extensive lymphadenectomy, is recognized as the optimal treatment in terms of long-term survival (1).

It is well established that the stomach routed via the posterior mediastinum is the most commonly used conduit after esophagectomy (2). Occasionally, however, alternative routes have to be utilized such as in cases of esophageal diversion and subsequent reconstruction. At our institution, we have preferentially used the substernal route in these instances. We examined the outcomes after such reconstructions and also examined outcomes in patients receiving conventional orthotopic reconstruction.

The abdominal portion of the operation is performed in standard fashion, with gastric mobilization and preparation of a conduit based on the right gastroepiploic artery. We prefer to create a gastric conduit less than 5 cm in width and observe for punctate bleeding at the staple line of the lesser curvature. The staple crossing points are imbricated with sutures. A pyloroplasty or complete pyloromyotomy is routinely performed in all patients. The surgical techniques for use of the posterior mediastinal (PM) conduit route are well established. In the substernal reconstruction (SR) group, operations were typically performed with a midline laparotomy and “hockey-stick” neck incision extending to the midpoint of the sternum. The left sternoclavicular joint and medial portion of the first rib and clavicle are resected to enlarge the thoracic inlet. The retrosternal space is developed bluntly and the gastric remnant is passed with careful handling of the pedicle and attention to maintain the appropriate orientation. The anastomosis is most often performed in a stapled side to side fashion with hand sewn closure of the anterior defect. The anastomosis is covered with a rotated myofascial pectoralis major flap and multiple drains are placed. A feeding jejunostomy was routinely inserted in all patients.

The postoperative management was similar in all patients. An esophagram to assess for anastomotic leak was obtained on postoperative day 5–7. Unpaired Student’s t-test for comparison of continuous variables and Fisher’s exact test for comparison of nominal values was performed. A two-tailed P value of less than 0.05 was considered statistically significant. A multivariate analysis of the entire cohort was performed, including factors having a P value less than 0.1.

We identified 33 patients who underwent SR and 182 who underwent a PM gastric conduit with cervical anastomosis. Preoperative variables are depicted in Table 1. Both groups were equivalent with respect to preexisting comorbidities, age, gender, and smoking status. Patients in the SR group predominantly had benign pathology (20/33, 60.6%) while those in the PM group predominantly had malignant pathology (106/182, 58.2% adenocarcinoma; 38/182, 20.9% squamous cell carcinoma). Sixteen SR patients (16/33, 48.5%) had a delayed reconstruction after prior diversion, as a result of esophageal perforation. The remainder of SR patients with benign disease had a benign stricture (n=3) and an esophageal perforation (n=1) that was resected and reconstructed in one stage. SR patients also had significantly lower preoperative albumin levels (P=0.003). Post-operative complications, as previously reported (3), are described in Table 2. Hospital LOS was significantly longer in the SR group (37.1±66.0 vs. 17.6±12.8 days, P<0.001). Anastomotic leak occurred more frequently in the SR group, however this difference did not reach statistical significance (10/33, 30.3% and 31/182, 17.0%; P=0.07). Thirty and 90-day mortality were similar in the two groups (0/33, 0% and 12/182, 6.6%; P<0.05). Patients with SR were more likely than patients with PM reconstruction to have respiratory complications (P<0.04), other complications (P<0.05), reoperation (P<0.03), and transfusion (P<0.0001). Using logistic regression, higher preoperative weight (P=0.02), lower preoperative albumin (P=0.001) and benign histology (P=0.01) predicted postoperative respiratory complications, while conduit routing was not associated with anastomotic leak (P=0.17) or postoperative mortality (P=0.99). 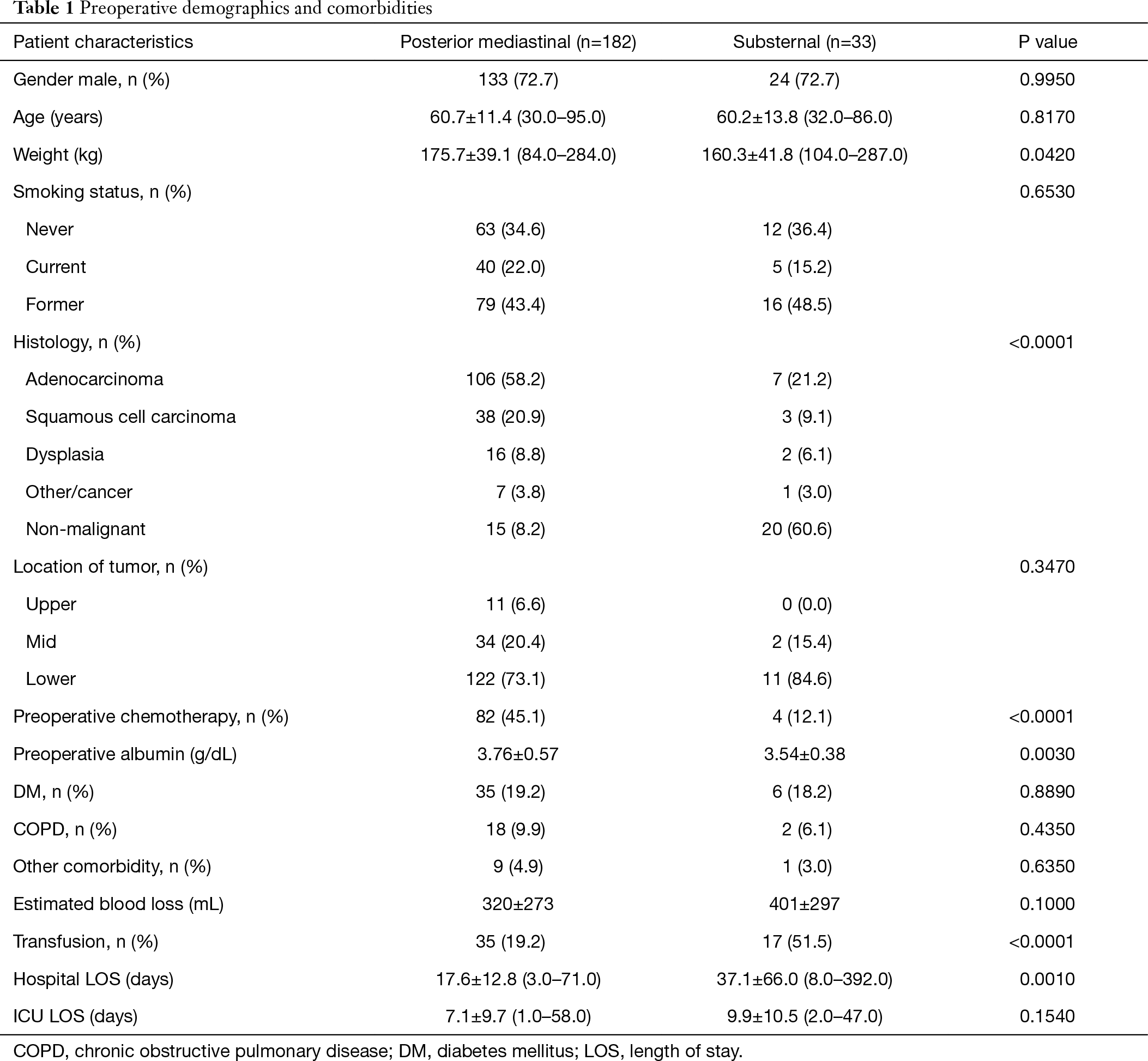 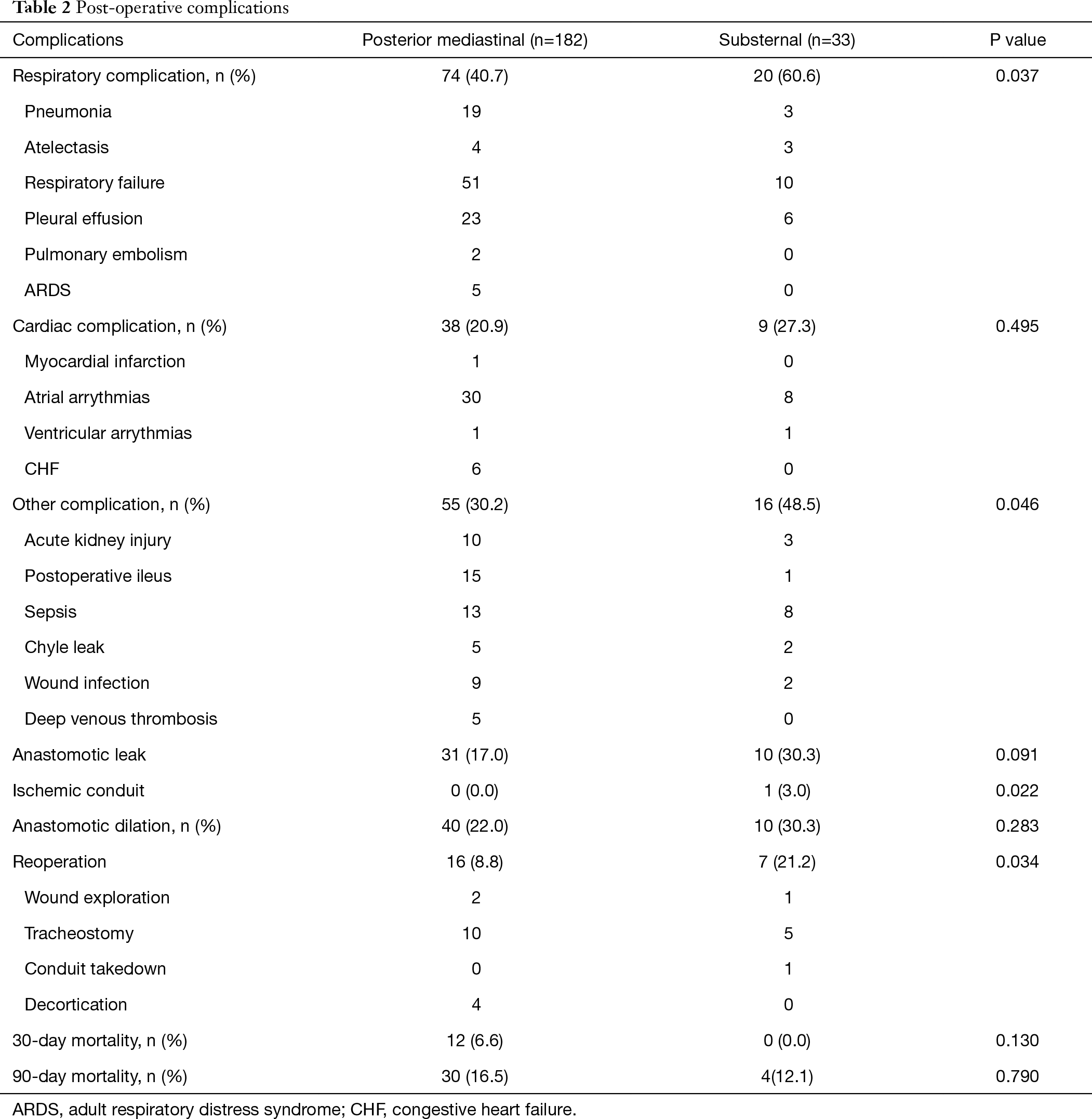 The majority of patients undergoing esophagectomy are reconstructed using a gastric conduit with a preserved right gastroepiploic artery routed via the posterior mediastinum (2). There are several occasions where the orthotopic route is not technically feasible or optimal. These include patients with previous esophagectomy and esophageal diversion whereupon the posterior mediastinum is obliterated or patients with mid-thoracic tumors that develop tracheoesophageal fistulas particularly after radiation.

Previously reported advantages of the PM route compared to substernal or anterior mediastinal routes include shorter distance to the cervical esophagus (4), improved blood supply at the anastomosis (5), lower rates of perioperative complications (2,6,7), fewer anastomotic leaks (8) and strictures (2) and improved mortality (7,9). Conversely, SR avoids potential issues with tumor bed recurrence, including obstruction and increased morbidity of salvage radiation. SR also lends itself well to staged operations and improved access to strictures. While by far the most common, the superiority of the posterior mediastinum has not been uniformly accepted, particularly when cervical anastomosis is required.

There have been conflicting reports on the measured distance of the two paths for reconstruction. A cadaver study by Coral et al. indicated a shorter distance using PM compared to SR (10). In contrast, Chen et al. reported that required conduit length is greater when the posterior route of reconstruction is used. Measured in vivo at the time of esophagectomy the distance from the cricoid cartilage to the pylorus was 32.68±2.67 cm and 35.48±2.93 cm, for the anterior and posterior routes respectively (P<0.001) (11). In our experience, the substernal route allows a better tension-free anastomosis in cases where conduit length is an issue. Accordingly, when utilizing PM reconstruction a higher frequency of anastomotic leakage would be expected due to increased ischemia of the gastric conduit tip. Ischemic stress may also be affected by the narrow entrance to the thoracic inlet and the severe angulation that are created when the SR route is used. As described by Harrison, we prefer to resect the sternoclavicular joint to augment the narrow passage (12). Despite that, our results showed higher leak rates in the SR group, reflecting the fact that multiple factors contribute to the development of an anastomotic leak, and also the disparity between the two study populations.

Some reports have shown no difference between the SR and PM techniques in the perioperative complications and functional outcomes (13-15). Zheng et al. found a significant association (P=0.018) between anastomotic stricture and use of SR (2). There are six quality randomized control trials that compare PM and SR methods that were analyzed by Urschel et al. in a meta-analysis (14). The primary outcomes considered were mortality, leak rate, and pulmonary and cardiac complications. Secondary early outcomes included length of stay, duration of ventilation, duration of operation, and blood loss. Late outcomes examined were strictures, swallowing function, quality of life, body weight, and gastric emptying. Relative risk expressed as posterior versus anterior mediastinal route, was 0.56 (P=0.34) for operative mortality, 0.43 (P=0.08) for cardiac morbidity, and 0.67 (P=0.26) for pulmonary morbidity. While these all favored the PM route they were not statistically significant differences. Relative risk was 1.01 (P=0.98) for anastomotic leaks, showing no preference for conduit route. The two routes of reconstruction provide equivalent late foregut function and quality of life.

A commonly cited argument in favor of SR is that it affords safer delivery of postoperative radiotherapy if local recurrence occurs (9), thus improving local control and possibly survival. The study by Zheng et al. compared 306 patients (120 PM and 186 SR) looking specifically at long term survival as determined by conduit route and other variables. Upon multivariate analysis, preoperative albumin level (P=0.009), pT status (P=0.006), and pN status (P<0.001) were independent factors prognostic for survival. Conduit route was not a significant determinant of survival (P=0.477) (2).

Our study findings would support the superiority of the orthotopic route, when feasible, as we observed higher intraoperative blood loss, more frequent respiratory and other complications and increased length of stay in the substernal patient cohort. Rates of anastomotic complications were also lower in the orthotopic route, albeit not significantly so. Finally, 30- and 90-day mortality rates were similar between the two groups.

Our study has the limitations of being a retrospective study. The results may represent patient selection bias, as the substernal route was only used when the orthotopic route was unavailable or perceived to be unfavorable in terms of conduit length. While preexisting comorbidities are equivalent, roughly two-thirds of the SR group are esophageal perforations and/or delayed reconstructions, both indicating a significant physiologic insult at the outset of treatment. Comparisons of these groups should be examined carefully and further study is needed.

In summary, a contemporary series of esophageal reconstruction from a large-volume esophageal center showed that substernal transposition of the gastric conduit after esophagectomy is associated with increased length of stay, increased perioperative morbidity, excluding anastomotic leaks, and similar mortality compared to the PM route. SR should be used only as a last resort, when the PM route is not available.

Ethical Statement: The study was approved by Institutional Review Board of Indiana University (No. #1206008870).