Lung cancer remains one of the most common and dangerous neoplasms in the human body due to its late detectability, low operability rate and high mortality. According to data published by the International Agency for Research on Cancer (IARC), almost 1.8 million cases of pulmonary and bronchial cancer were reported worldwide in 2012, which accounted for 13% of all cancer cases (1). In Poland, according to 2012 data of National Cancer Register, lung cancer incidence was 21,400 new cases, 80% of which were non-small cell lung carcinoma (NSCLC) patients. The most common histological type of NSCLC is squamous cell carcinoma (2,3), followed by glandular and giant-cell carcinoma. It is believed that majority of this disease cases is connected with cancerogenic activity of cigarette smoke (4). The condition is usually asymptomatic for a long time which significantly delays diagnosis. It is considered that nearly 30–40% patients do not qualify for surgical procedure since the time of diagnosis due to too advanced a level of the disease (5). Lung cancer, at the molecular level is characterized by the rapid acquisition of the invasive type phenotype by neoplastic cells, which conditions the process of neoplastic cells’ migration to surrounding tissues through the bloodstream or lymphatic system, and thus affecting the formation of metastases. The activation of metastases formation depends on the simultaneous course of two processes: loss of intercellular bridges in the tumour and degradation of extracellular matrix (ECM) proteins (6).

The group of matrix metalloproteinases (MMPs) includes 28 enzymes differing in their quaternary structures and substrate specificities, of which 22 have been identified in the human.

Metalloproteinases initially were classified on the basis of their ability to decompose the elements of extracellular matrix, but later it was stated that they perform regulatory function in all stages of cancer development. It has been discovered recently, though, that the cell exposure on these enzymes affects the tracts of transmitting the cell signal which activate cell development in the early stage of the tumour progression. It was also stated that MMP induces genome unstability, errors during the process of cell mitosis. Scientific reports also indicate the fact that MMP joined with neoplasm can stimulate processes connected with epithelial-mesenchymal transition (EMT), development process, which is activated in neoplastic cells during the cells’ invasion and metastases formation.

Cells undergoing ETM lose their normal adhesive properties of epithelial cells and are subject to a series of changes, the change of E-katheryne and mesenchymal markers expression included, they are characterized by increased mobility, increased invasiveness and increased resistance to death (7,8). E-katheryne is a substrate for some MMP. MMP effect also on integrins having an effect on decreasing adhesive abilities of cells (9). Moreover, as a result of ETM from neoplastic cells, but also epithelial cells surrounding a tumour or endothelium cell vessels, fibroblasts, connected with neoplasm, are formed. They are characterized by capacity to intense MMP production, which enables neoplastic cells to leave a primary tumour focus (10). MMPs due to its proteolytic activity decompose extracellular matrix elements making the process of neoplastic cell migration easier. They can also activate the migration in non-proteolytic way by stimulating intracellular signaling cascade. MMP can also support cells’ apoptosis in anoikis process. As a result of these types of phenomena a selection of resistant cells is observed and MMP activity can lead to survival of tumourgenic cells of increased sensitivity on apoptotic stimuli. MMP can also inhibit apoptosis by releasing growth factors, for example, EGF and IGF (11,12).

Suppression of metalloproteinases’ activity on different levels of cell cycle (13,14), might contribute to stopping the growth of a tumour and acquisition of the invasive phenotype by neoplastic cells.

Concentration of metalloproteinases and their tissue inhibitors in neoplastic disease patients are assessed at many levels, applying different methods. The mRNA expression profile (RT-PCR, Northern blotting, FISH) in neoplastic cells, protein expression level (immunohistochemistry), enzyme activity (gelatine zymography), or protein concentration (Western blotting, FISH) in the tumour tissue and bodily fluids can be determined (15,16). In many centres immunoenzymatic assays have been assessed for their diagnostic and/or prognostic value in determining concentrations of metalloproteinases in serum, plasma and other body fluids of patients suffering from neoplasms (17-19). Despite encouraging research results, MMPs activity determination has not yet been introduced into routine laboratory diagnostics due to the complexity of analytical procedure,

The study group consisted of 81 NSCLC patients (24 females and 57 males) aged 46 to 86 years (mean age, 67±8.2 years). The subjects were surgically treated in the Department of Thoracic, General and Oncological Surgery, at Military Medical Academy of Lodz University Teaching Hospital. Patients were divided into subgroups according to classification of TNM of lung cancer modified in 2010. The control group consisted of 39 randomly selected patients aged 27 to 73 in whom neoplastic and inflammatory changes had been excluded, and they underwent elective procedure for a calculus of the gallbladder without cholecystitis. Blood for testing was collected every time upon obtaining patient’s conscious consent—before the procedure, during basic additional investigation conduct, and two weeks after an operation. Blood was taken in the amount of 2×2.0 mL using basilica vein contactless method into a vacuum test-tube. It was then centrifuged in an MPW 360 centrifuge at 3,000 rotations/minute at 0–4 °C. Plasma was used to determine the concentration. Samples were frozen in temperatures below ‒60 °C. Concentration of MMP-2 and TIMP-2 were determined by means of reagent kits—Quantikine Human MMP-2 (total) Immunoassay and Quantikine Human TIMP-2 Immunoassay by R&D Systems (Minneapolis, MN). Due to the lack of a typical normal distribution and uneven number of samples for statistical assessment, Mann-Whitney test was applied for compared groups, the test for independent samples, comparing the distribution of studied variables in order to assess the importance of change in concentration of MMP-2 and TIMP-2 obtained in subgroups. In case of dependent variables—MMP-2 and TIMP-2 concentrations were measured before and after the procedure by using Wilcoxson’s test. Differences for which P<0.05 were considered statistically significant. The study was performed with the approval of Bioethics Commission of the Medical University of Lodz (resolution No. RNN/435/12/KB).

In the study group of NSCLC patients, squamous carcinoma was predominant (65%), with the remaining patients (35%) diagnosed with adenocarcinoma. As far as the TNM classification is concerned, majority of patients were with T2 (60%), N0 (68%), M0 (100%) groups, and were at the first stage of clinical advancement (56%). Clinical data concerning NSCLC advancement in study group is presented in Tables 1-3. 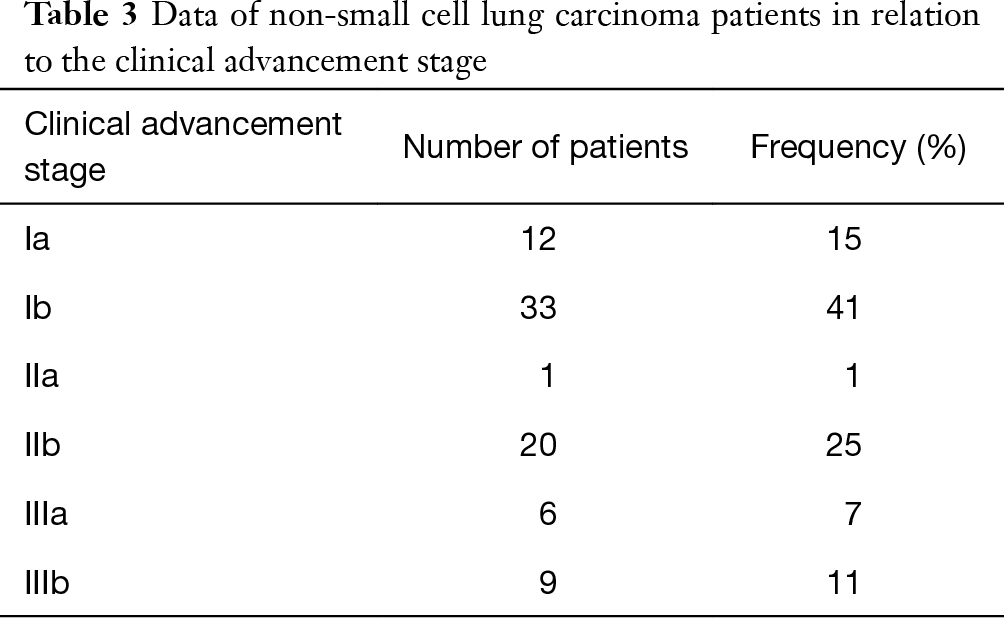 Concentration of extracellular matrix metalloproteinase MMP-2 and its tissue inhibitor TIMP-2 in NSCLC patients was analyzed in comparison with control group. Patients with malignant lung carcinoma achieved significantly higher mean of MMP-2 and TIMP-2 concentration than patients observed in the control group (values statistically significant P<0.001), which was presented in Table 4. It means that there is a positive correlation between lung carcinoma incidence and the increase of concentration of studied metalloproteinase and its inhibitor.

It was also analyzed if the surgical removal of a malignant lung tumour affects the change of MMP-2 and TIMP-2 concentration in patients’ serum. In order to find this, samples were collected and concentrations of the examined parameters were determined twice: before the operation and at least two weeks after an operation. A statistically significant decrease in mean MMP-2 and TIMP-2 concentration was observed in patients in the postoperative compared to preoperative period (P<0.001) (Table 6).

We have also defined the ratio of MMP-2/TIMP in patients in individual stages of the neoplasm advancement. The values of coefficient MMP-2/TIMP-2 in all groups turned out to be close and did not display any statistical variability. Table 7 which indicates coordinated concentration changes of MMP-2 and TIMP-2 in individual groups. 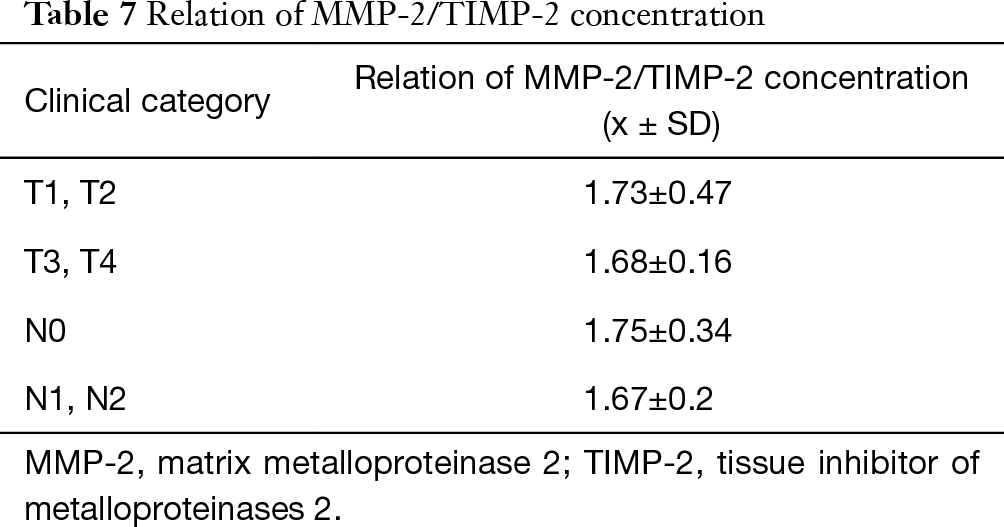 Malignant cancers are a serious epidemiological, therapeutic and social problem (20), and hence new markers which may help to define prognosis for cancer patients are searched. Researches on the usefulness of MMP-2 and TIMP-2 as prognostic factors in cancer patients are presenting promising results. The concentration and expression of tissue inhibitors of metalloproteinase depending on the stage of disease have been studied, among others, in urothelial carcinoma, breast carcinoma, hepatocellular carcinoma, gastric carcinoma, colorectal carcinoma, cutaneous carcinoma, head and neck as well as endometrium carcinoma (17-19,21-28).

It has been proved that MMPs affect all stages of cancerogenesis (29). They influence tracts of cell signal transmission, induce genome instability, errors during cell mitosis reaction, stimulate processes connected with EMT. It has been emphasized that MMP-2 activity leads to the breach of basement membrane continuity. It is the result of MMP-2 capacity to degrade type IV collagen being its component. Therefore, MMP-2 plays a significant role in the growth and invasion of tumours and formation of metastases (30).

The presented study analyzed serum MMP-2 concentration in NSCLC patients compared to the control group free from neoplastic disease. Statistically significantly higher mean MMP-2 concentrations were found in lung cancer patients in comparison to those in the control group (P<0.0001). The results were consistent with observations made by Hrabec et al. (31), who demonstrated as much as seventeenfold rise in MMP-2 expression in lung carcinoma cells compared to normal pulmonary stromal cells in their research.

In our work we also observed a statistically significant fall in MMP-2 concentrations in patients after surgical lung carcinoma treatment and recovery in comparison to preoperative concentrations. It is believed it can result from fibroblast stimulation to intensify MMP-2 production through EMPRIM particles, i.e., membrane glycoproteins present on the surface of tumour cells (32).

What is more, we managed to confirm a statistically significant difference in MMP-2 depending on the stage of disease. In the group of patients with T1and T2 tumour, mean values were lower than in patients withT3 and T4 tumours. Based on the above, it appears that MMP-2 concentration correlated with the primary tumour size. Moreover, a statistically significant difference was demonstrated between the patent group without metastases (N0) and the group with metastases to lymph nodes (N1–N2). Increased MMP-2 concentrations were also observed by Sasaki et al. (33), they found a rise in MMP-2 concentration in patients with stage IIb cancer compared to patients with stage I cancer. Also, Ishikawa et al. (34), described increased MMP-2 expression in part of neoplastic cells of lung tumour, Nevertheless, a relationship between an MMP-2 concentration change and the stage of lung cancer disease was not observed by Ming et al. (30) and Kopczyńska et al. (5).

Clinical examinations demonstrated also the fact, that adversely to its name, tissue inhibitor of metalloproteinase 2 might have an activating function for proMMP-2 with the participation of one of transmembrane MMP (43).

Thus, the overexpression of the MMP-2 active form can be correlated with a high TIMP-2 expression, TIMP-2 can play an indirect role in local development of neoplasm and metastases formation and recurrent disease in lymph nodes. TIMP-2 can also, independently from MMP-2, stimulate the process of neoplasm development (37,44,45).

It also seems interesting to define, except from defining MMP-2/TIMP-2 concentration in serum, the MMP-2 and TIMP-2 expression in tissue samples of lung cancer patients. Such studies were performed by Pilar et al. They proved the rise in MMp-2 tissue expression in non-small cell lung cancer at the simultaneous fall of TIMP-2 expression. Yet, no statistically significant difference between the stage of cancer advancement and the MMP-2’TIMP-2 tissue expression was displayed (46).

In the presented report, we managed to confirm an unambiguous relationship between MMP-2 and TIMP-2 concentrations, the stage of non-small cell lung carcinoma and presence of metastases to lymph nodes. However, due to the divergence of data in available literature, it is necessary to continue research on the role of MMPs and their inhibitors as a potential prognostic factor in neoplasms on a larger study group. It may also be interesting to explore values of both markers in the squamous cell carcinoma and adenocarcinoma groups separately. The importance of prolonged monitoring of patients should also be emphasized in order to examine the possible correlation of MMP-2 and TIMP-2 level in plasma before surgical procedure in the context of recurrence of the disease.

Ethical Statement: The study was performed with the approval of Bioethics Commission of the Medical University of Lodz (resolution no. RNN/435/12/KB) and written informed consent was obtained from all patients.