An 18-year-old woman was referred to our emergency department with an 8-day history of acute onset of vague headache and fever. Three days after admission, her symptoms got worse, featured by intermittent episodes of generalized seizures with loss of consciousness and behavioral dysfunction such as babbling, bouts of laughing and crying with no apparent reasons. Of note, her parents denied any pertinent medical history or family history of the disease. Then the neuroleptic treatment was started. Further lab results showed her cerebrospinal fluid (CSF) pressure, biochemical examination, culture, and tuberculosis antibody test indicated only moderate lymphocytic pleocytosis without any significant abnormalities worth being concerned about. In addition, serologic testing, antinuclear antibodies, serum tuberculosis antibody, and viral analysis were also negative. Brain magnetic resonance imaging (MRI) and pelvic ultrasound showed no pathological findings. However, chest computed tomographic (CT) scan revealed a large mixed-density cystic mass (6.8 cm × 4.7 cm) with calcifications in right anterior mediastinum (Figure 1). Unfortunately, after valproic and IVIg therapy for a week, her psychiatric and neurological symptoms failed to alleviate. However, she tested positive for anti-NMDAR antibody in both serum and CSF samples (titers of serum 1:32; CSF 1:100) on hospital day 9. Therefore, the diagnosis of anti-NMDA receptor encephalitis and concomitant mediastinal teratoma was considered. 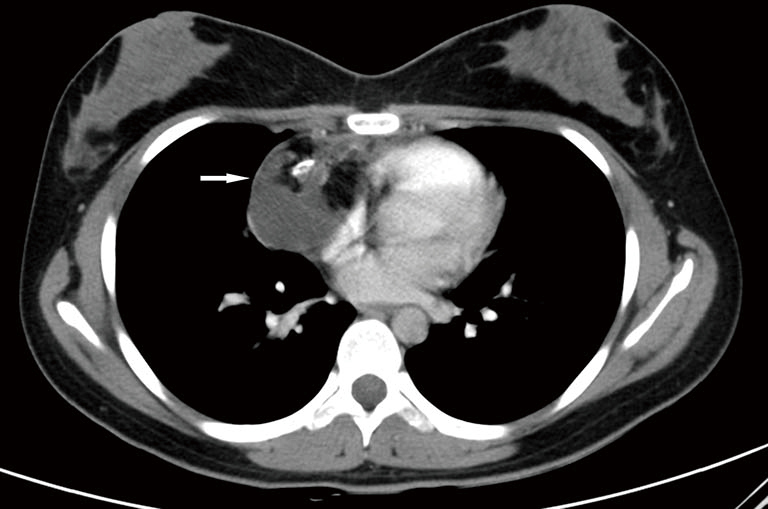 The patient then underwent mediastinal tumor resection through sternotomy. Pathologically, the tumor was a mature teratoma (Figure 2). Postoperatively, she was transferred to intensive care unit and given IVIg and antiepileptic medications. Mechanical respiratory support was required until postoperative day 14 (POD 14) due to recurrence of seizure. After that, the neurological symptoms improved and seizures relieved gradually, and the patient was weaned from ventilatory support on POD 15. She was finally discharged after a two-month of hospital stay. At the 1-year follow-up, the patient achieved complete recovery without any serious sequelae. 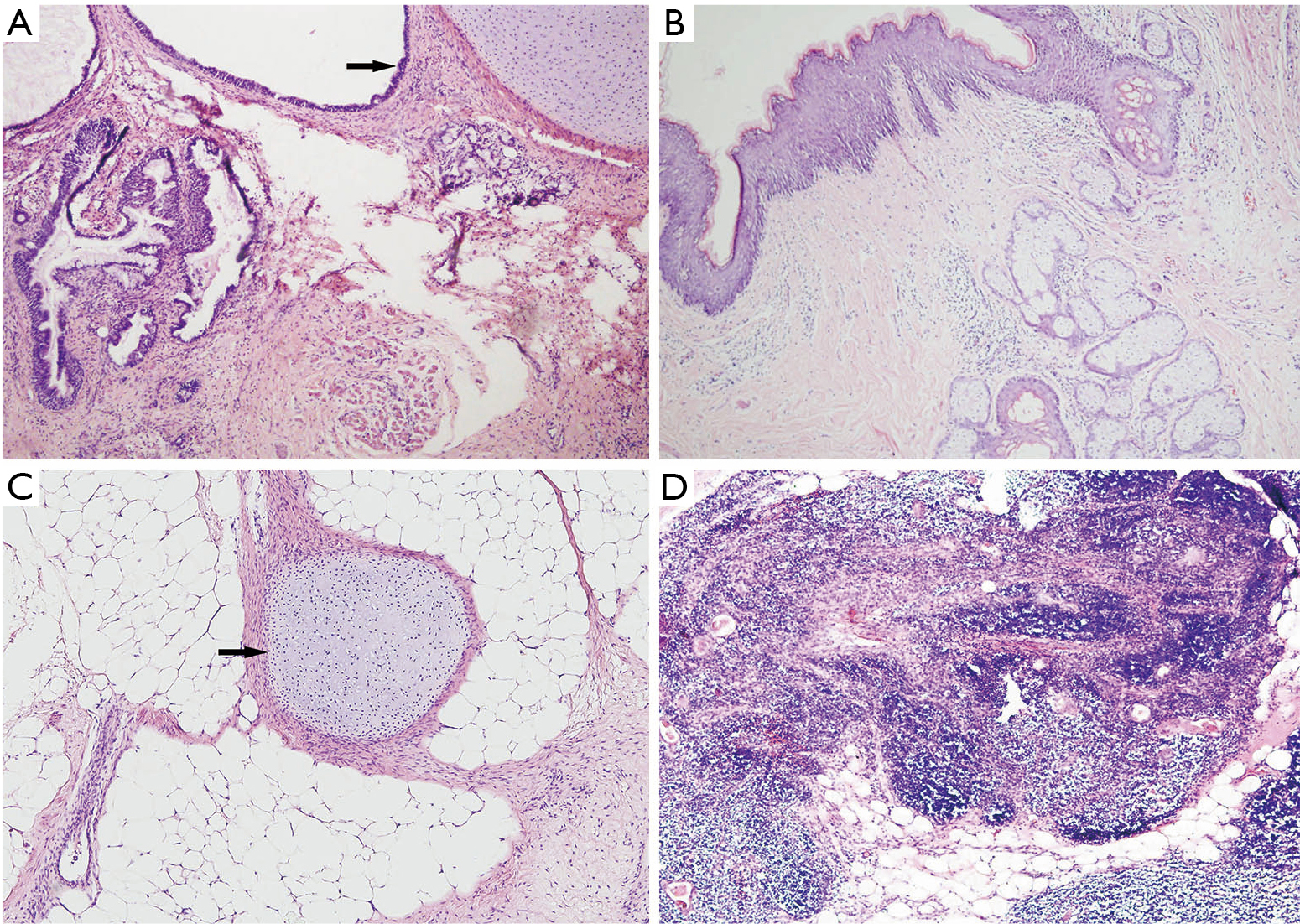 Anti-N-methyl-D-aspartate receptor (anti-NMDAR) encephalitis is a recently identified neuroautoimmune disorder characterized by antibodies against the heteromeric NR1–NR2 receptor complex which was first described by Dalmau (1) in 2007. In terms of the more than 1,000 reported cases over the past 10 years, ovarian teratoma in young woman is the most common tumor associated with the disease while mediastinal teratoma is exceedingly rare (9). To our best knowledge, only three cases have been documented yet (6-8).

Anti-NMDAR encephalitis, a highly lethal but treatable multistage illness, is caused by autoantibodies directed against the NMDA receptors which are ubiquitous localized to the limbic system and in particular the hippocampus in the brain (10). It frequently begins with prodromal flu-like symptoms including headache, fever, nausea, vomiting, diarrhea, or upper respiratory tract infections (11). Patients then experience psychiatric and neurologic symptoms such as seizures, decreased level of consciousness, lethargy, hypoventilation, autonomic instability, and dyskinesias due to anti-NMDAR antibodies binding with NMDA receptors (12). However, the non-specific and diverse symptoms often lead to misdiagnosis of the disease (11). Definitive diagnosis is established by detection of anti-NMDAR antibodies in CSF and/or serum (13,14). In our case, the patient exhibited prodromal flu-like symptoms, psychiatric and neurologic symptoms and no signs of meningitis; samples of CSF showed moderate increase of lymphocyte. Therefore, we strongly suspected this disease because of her clinical feature and CSF examination results and conducted chest CT and pelvic ultrasound. The presence of a mediastinal teratoma and anti-NMDAR antibodies led to a final clinical diagnosis.

Immunotherapy and tumor resection are identified as effective methods in delaying progression and preventing relapse of anti-NMDAR encephalitis. First line of immunotherapy includes corticosteroids, IVIg or plasma exchange in patients with a tumor. These treatments have enhanced effectiveness and speed of action after tumor resection (11). In addition, surgical removal of the tumor plays a critical role in cases where a teratoma is identified. Mortality may increase significantly due to neurological disease progression in patients without tumor resection (1). Table 1 shows the clinical characteristics, treatments, and outcomes of patients with anti-NMDAR encephalitis that developed with a mediastinal teratoma. The onset age ranged from 16 to 22 years in 3 females and 1 male with mediastinal teratoma (6-8). All of the patients reported showed dramatic improvement after teratoma resection. After a 2-month of hospital stay, our patient finally achieved complete recovery from anti-NMDAR encephalitis with no recurrence and sequelae. Prolonged hospital stays may be a problem due to significantly slower decrease of antibody titers within the CSF relative to the serum (14).

In conclusion, anti-NMDR encephalitis should be considered in patients with paraneoplastic encephalitis or psychiatric and neurological disorders especially with a teratoma. The diagnosis is based on the detection of anti-NMDAR antibodies against the N1 subunit of NMDA receptors in CSF and/or serum. Surgical removal of the primary tumor along with prompt immunotherapy can delay the progression, improve the survival rates and limit the relapse of the disease.

Funding: This work was supported by grants from National Natural Science Foundation of China (grant number 81372505 to Dr. L Liu).

Informed Content: Informed consent was obtained from the patient for publication of this manuscript and any accompanying images.