Clinical characteristics and outcomes of lung cancer patients with combined pulmonary fibrosis and emphysema: a systematic review and meta-analysis of 13 studies

According to GLOBOCAN worldwide estimation of cancer incidence and mortality produced by the International Agency for Research on Cancer (IARC) for 2012, Lung cancer was the most frequently diagnosed cancer and the leading cause of cancer death among males in 2012 (1). Therefore, studies on prognosis of lung cancer patients and prognostic factors were much needed.

More recently, combined pulmonary fibrosis and emphysema (CPFE) with upper lobe emphysema and lower lobe fibrosis of the lung had been recognized as an unique entity (2). CPFE was increasingly acknowledged as a separate syndrome with distinct clinical, physiological and radiological characteristics (3). CPFE was most often observed in males with a mean age of 65–70 years (4). Clinical features included severe dyspnea on exertion, subnormal spirometer findings, severely impaired gas exchange, hypoxemia on exercise, and characteristic findings on imaging (5). Several previous studies had suggested that patients with CPFE could present distinct clinical characteristics that were associated with different outcomes (6,7).

A literature search was performed in October 2017 by searching multiple literature databases, including PubMed, Embase, and Web of Science. We performed our search using the keywords as follows: “CPFE” or “combined pulmonary fibrosis and emphysema” and “lung carcinoma” or “lung cancer” or “lung neoplasm”. The computer search was supplemented with manual search of the reference lists of all retrieved studies and reviews for potential eligible studies. Language was restricted to English and Chinese.

Study selection inclusion criteria were as follows: (I) studies compared the clinical characteristics and prognosis between lung cancer patients with CPFE and non-CPFE (fibrosis, emphysema and normal); (II) odds ratios (ORs), mean differences (MDs) or hazard ratios (HRs) with 95% confidence intervals (95% CIs) were applied to measure the strength of role of CPFE on clinicopathological or survival of lung cancer; (III) data was available for further meta-analysis. Exclusion criteria were as follows: (I) meeting abstracts, comments, case reports, reviews, and meta-analyses; (II) data couldn’t be extracted or estimated; (III) duplicate studies. When multiple reports describing the same population were published, the most recent or complete report were used. Two reviewers independently assessed publications for inclusion in the review. Discrepancies were resolved through discussion by the review team.

Quality assessment of the studies

The methodological quality of the original studies was assessed by the Newcastle-Ottawa Scale (NOS), which consisted of three factors: selection, comparability of subjects, and outcome. Each study received a score from 0 to 9 (allocated as stars), and scores higher than 6 were considered high quality. Two authors independently performed this assessment and discrepancies were resolved by discussion.

HR and its 95% CI were used to evaluate the correlation between CPFE and patient survival. If the HR with 95% CI were reported in the original study, we extracted the data directly, If not, we estimated HR from survival rates with P values from log-rank test or Kaplan-Meier survival curves using the method reported by Parmar et al. (23), The weighted mean difference (WMD) and OR were used to compare continuous and dichotomous variables, respectively. All results were reported with 95% CIs. Statistical heterogeneity between studies was assessed using the chi-square test with significance set at P<0.10 and heterogeneity was quantified using the I2 statistic. The random-effects model was used if there was heterogeneity between studies; otherwise, the fixed-effects model was used. Subgroup analyses were performed to compare lung cancer patient with CPFE, fibrosis, emphysema, and normal. Sensitivity analyses were further performed by drop out each study. Begg’s funnel plots and Egger’s test were used to screen for potential publication bias. The software stataSE12.0 and review manager 5.3 were used to perform data analysis. All P values were two-sided and considered significant if <0.05.

Using the outlined searching strategy, a total of 268 citations were obtained for review of title and abstract. One hundred and seven duplicates were removed, 138 publications were excluded because the studies were animal experiment, literature reviews, meta-analysis, comments, letters, or unrelated studies based on the titles and abstract screening. Full texts of remained 23 studies were retrieved for review, of these, 10 publications were excluded due to irrelevant publications or lack of sufficient data for analysis. Finally, 13 studies with lung cancer patients with 809 CPFE and 7,228 non-CPFE (fibrosis, emphysema, normal) were included in this meta-analysis (Figure 1). 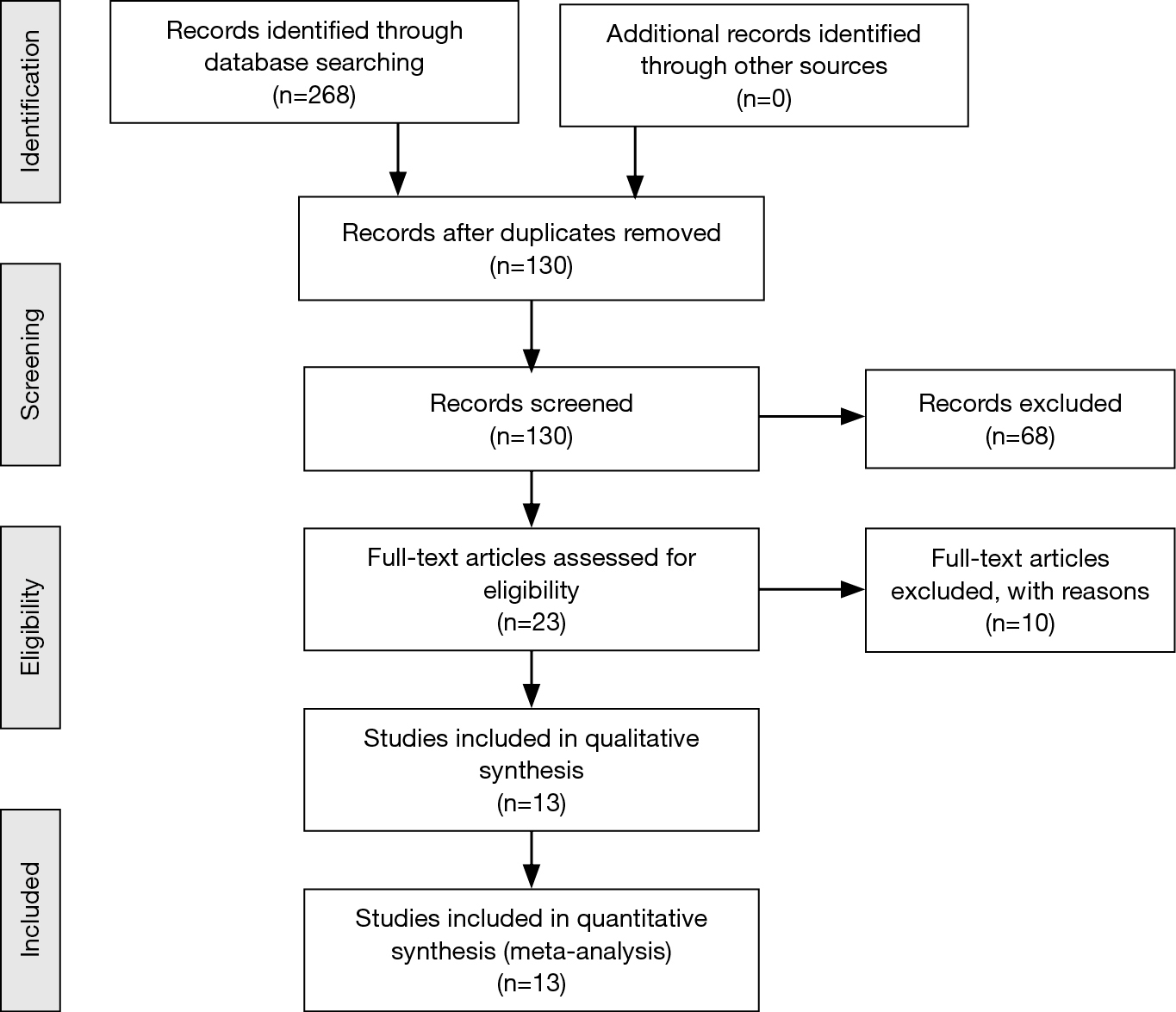 Characteristics of the studies

The characteristics of the included studies were shown in Table 1. We identified 13 retrospective studies published between 2011 and 2017, with 8,050 lung cancer patients from Asian (1 study from China, 12 studies from Japan). In seven studies, lung cancer patients were divided into four groups: CPFE, fibrosis, normal, emphysema. Four studies had two groups: CPFE, non-CPFE. One study divided into two groups: CPFE, Fibrosis. One study had three groups: CPFE, fibrosis, emphysema. Chest computed tomography (CT) was a significant way to diagnose lung disease among the seven studies, one study used thin-section computed tomography (TSCT), and the other five studies used high resolution computed tomography (HRCT) to diagnoses lung disease. The OS was investigated in 11 studies, 6 of these directly provided HR while survival data of other 5 studies were extracted from survival curves. The patients of nine studies were treated with surgical treatment while patients of three studies used multiple treatments. 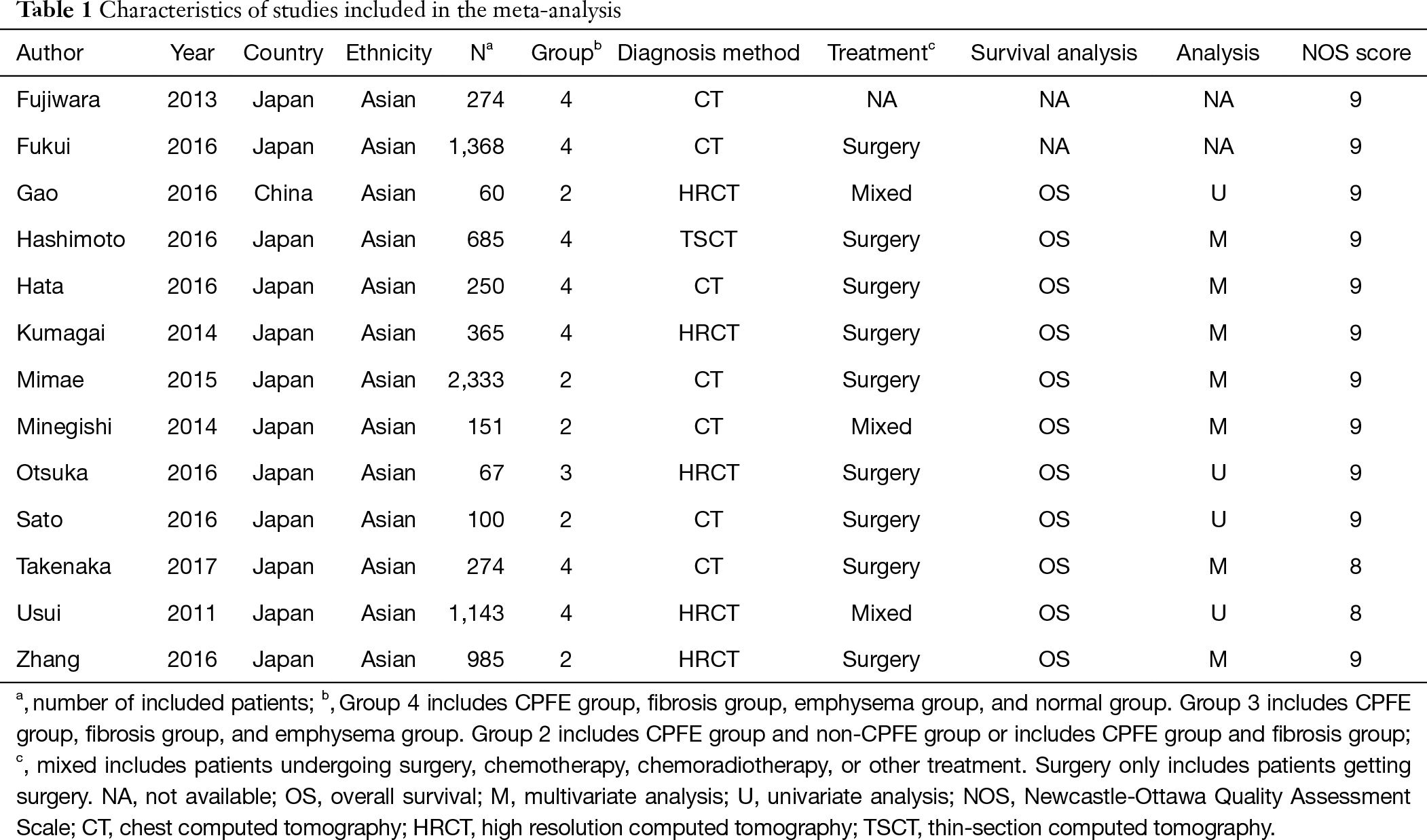 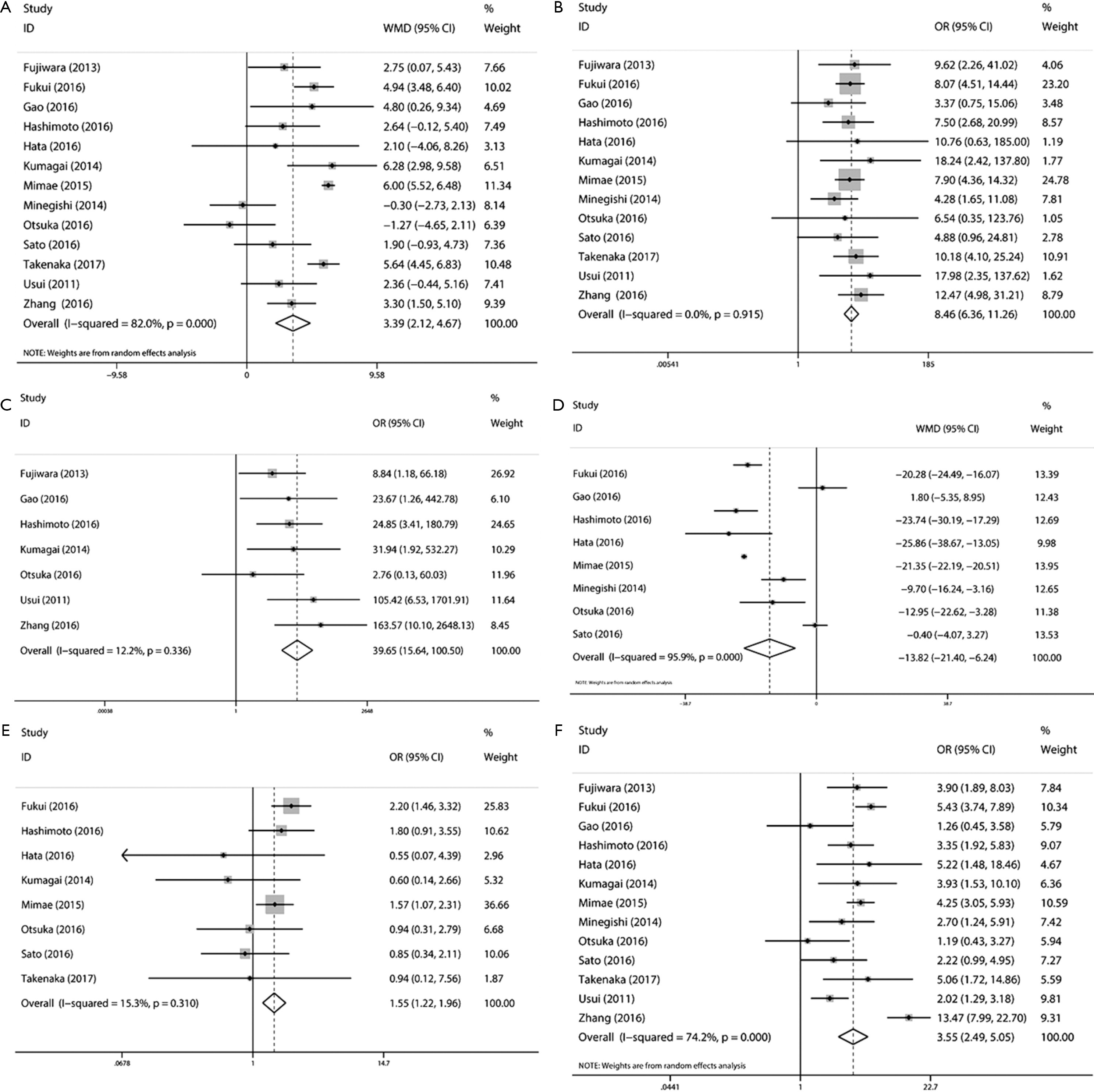 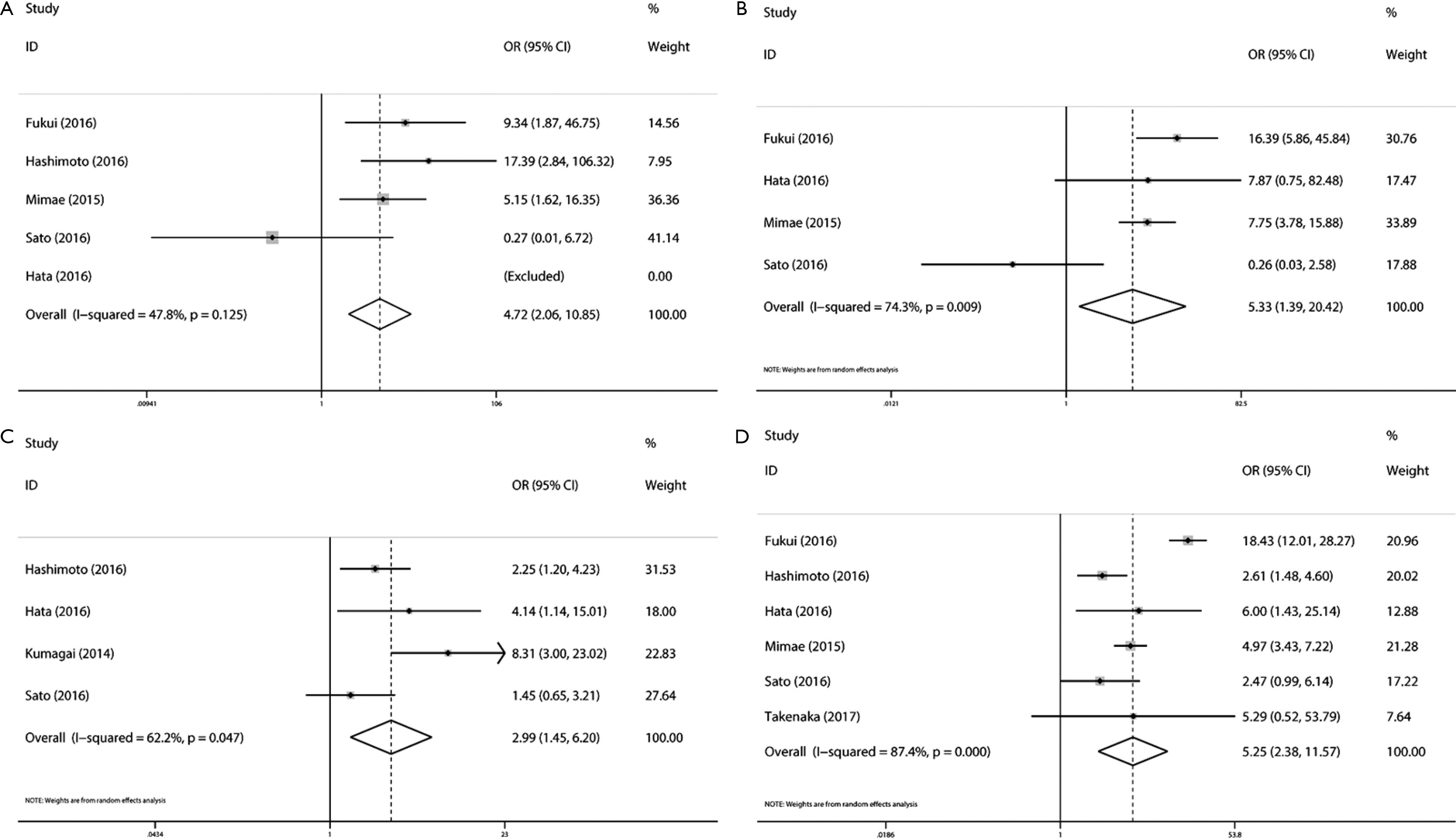 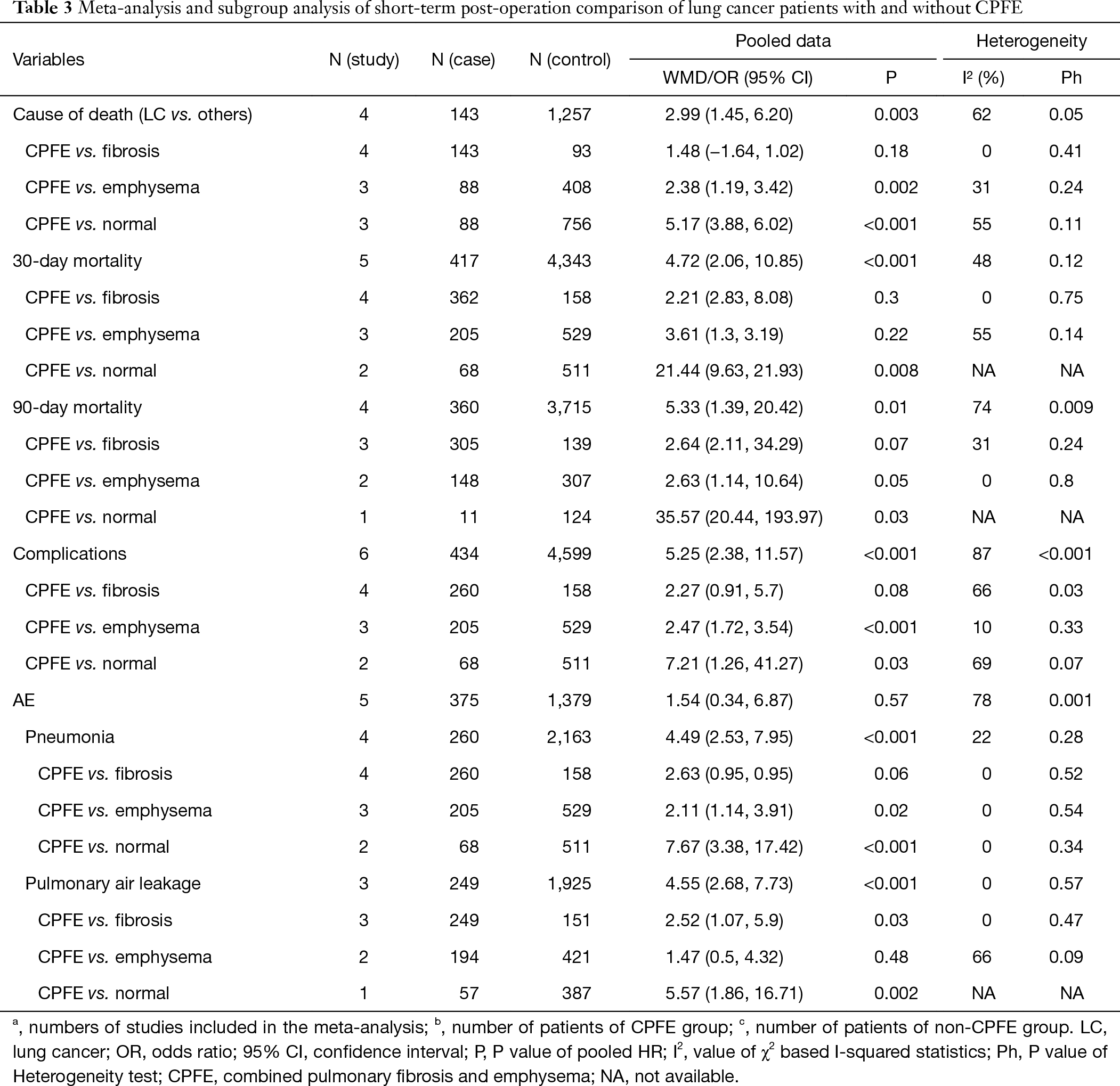 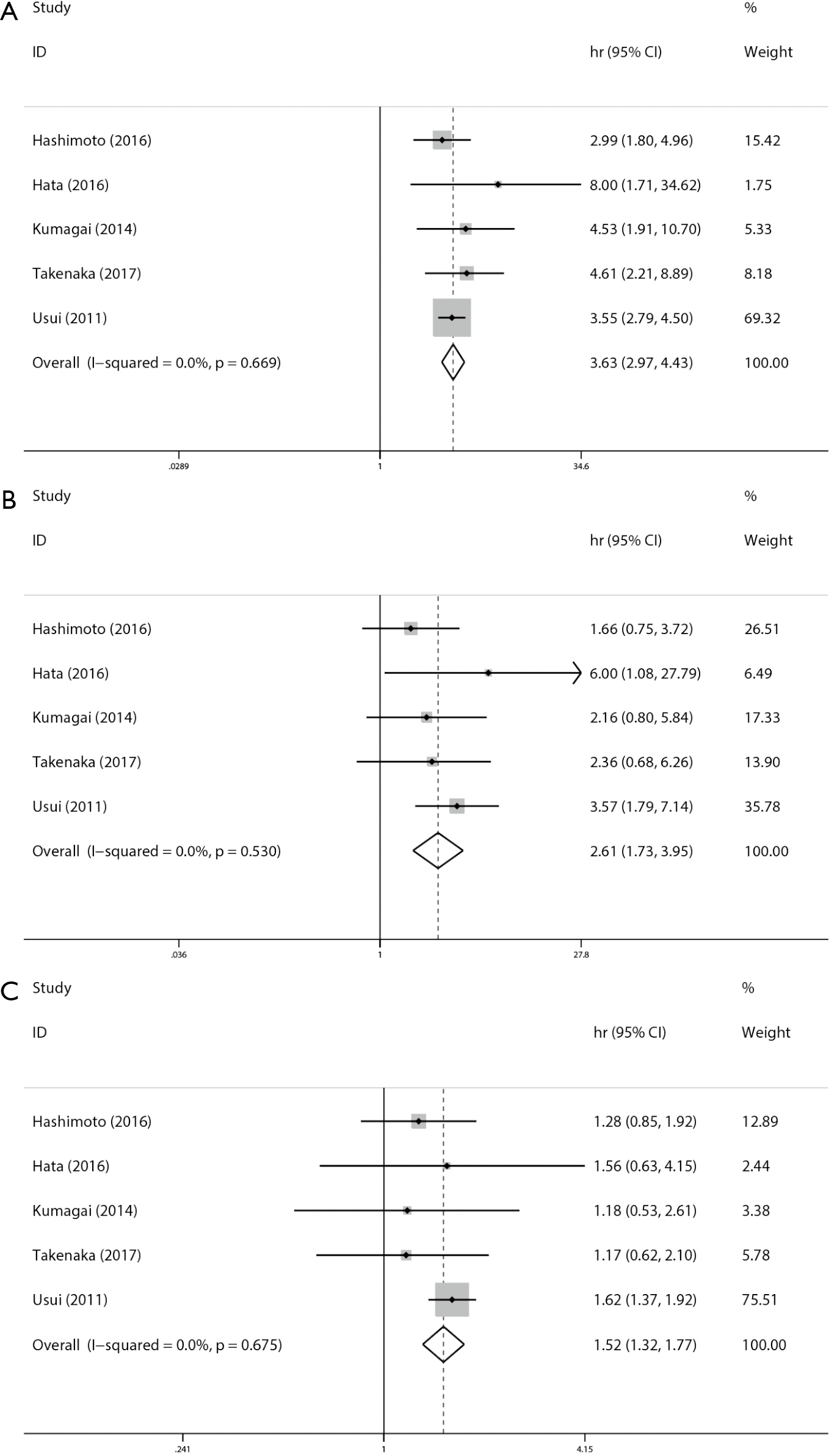 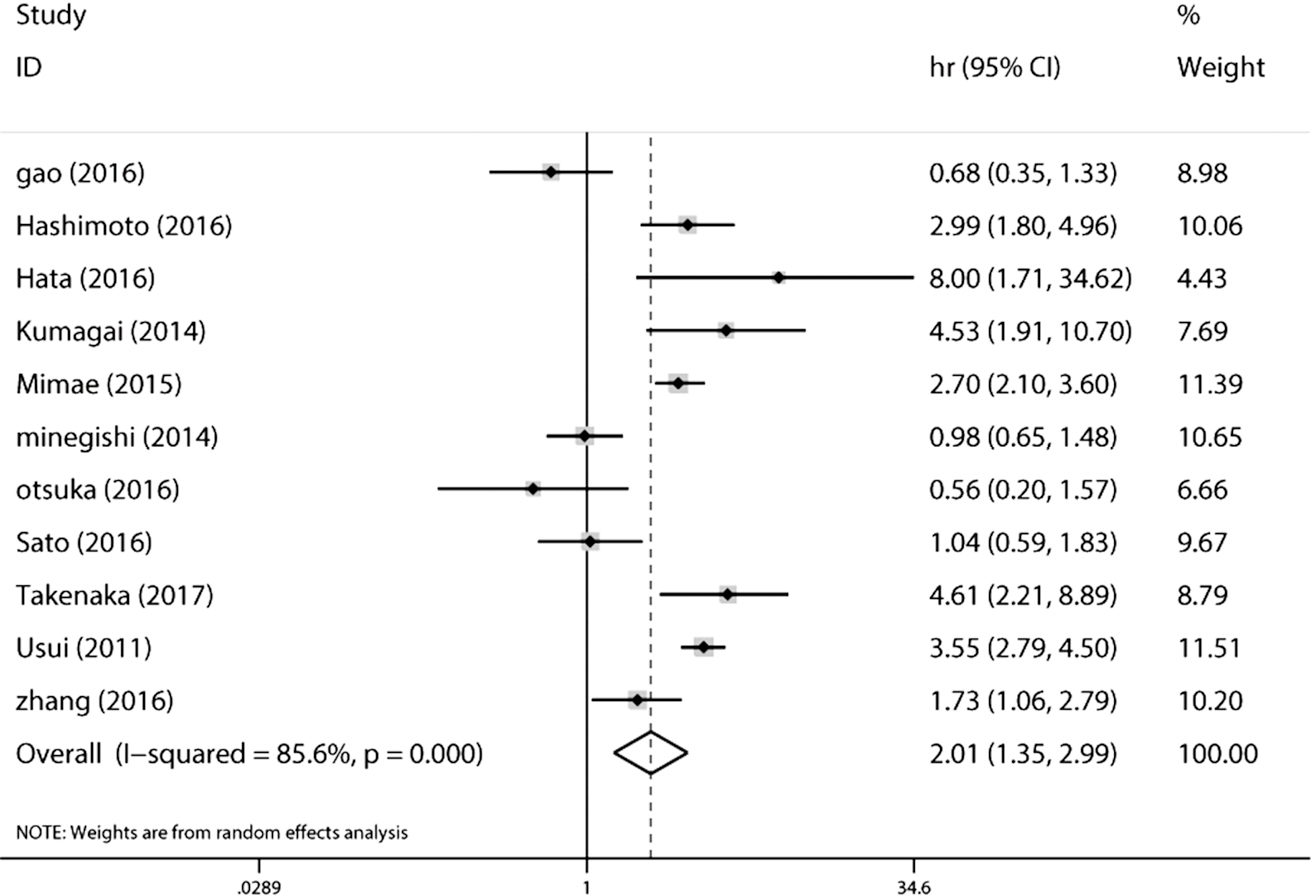 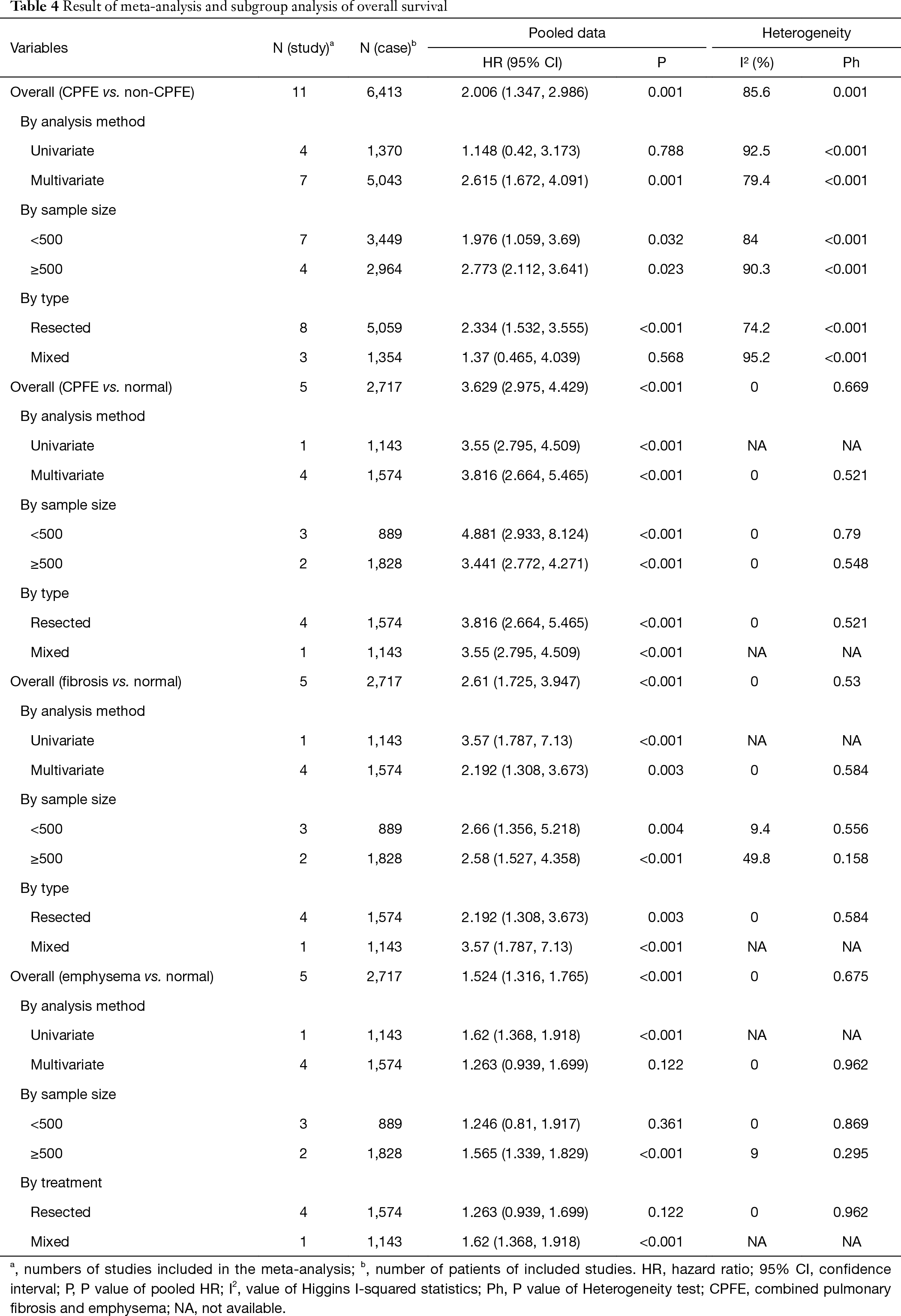 The composite physiological index (CPI) represents a combination of pulmonary ventilation and diffusing capacity, we calculated the CPI as follows: CPI = 91.0 – [0.65 × percent predicted diffusion capacity for carbon monoxide (DLCO)] – [0.53 × percent predicted forced vital capacity (FVC)] + [0.34 × percent predicted forced expiratory volume in 1 s (FEV1)] (27). Similar to previous studies, our study showed CPFE group had lower DLCO%, FEV1% and similar FVC%, VC%, FEV1/FVC%, FEV1 in respect to other groups (11,12,14,16-20,22). Assessment of respiratory function (HR =1.9, P=0.017, 95% CI: 1.1–3.2) is useful for the prediction of lung cancer patients with CPFE (27). Only fever studies explored the association of preoperative pulmonary function parameters with prognosis in lung cancer patients with CPFE who have undergone surgery (15,16,28). Mimae et al. reported that both lower VC% (HR =1.7, P=0.013, 95% CI: 1.1–2.5) and higher FEV1% (HR =1.5, P=0.05, 95% CI: 1.0–2.3) were associated with a poorer prognosis (15). However, Ueno et al. found that a higher preoperative CPI not the individual preoperative pulmonary function parameters was associated with a high risk of death (HR =1.03, P=0.017, 95% CI: 1–1.06), which was consistent with our study because FEV1% and DLCO% were included in the formula for calculating the CPI (28). Both lung function values and radiological CT findings were important for the decision of surgical approach. However, to quantify lung emphysema and fibrosis on CT was difficult and thus, other indicators were necessary (4,26). The CPI might provide more prognostic information than the individual function parameters in lung cancer patients with CPFE who have undergone surgery. Therefore, we indicated that preoperative CPI could be important for surgeons to select surgical approaches.

Our study had several limitations. First, the studies included in our meta-analysis were all retrospective collection of data and the results may have been subject to selection bias. Second, there was no uniform standard for the selection of treatment for all patients, limiting evaluation of the treatment. Although we did subgroup analysis of treatment, too few studies of mixed group could not explore the effect of difference on result. Third, although we collected all eligible studies for evaluating the clinical characteristic and prognosis of lung cancer patients with CPFE, the sample size was not large enough, which in turn weakened the statistical power of the results. Finally, in this present analysis, there were unmeasured and unknown confounders, of which the influence could not be completely excluded.