Pulmonary disease, especially pulmonary embolism is a common clinical disease. The standard diagnostic methods are pulmonary artery enhanced computed tomography (CT) scan and pulmonary angiography. But the contrast allergy and contrast associated nephropathy limit its applications in patients with allergic constitution or renal insufficiency. Additional inspection radiation is not suitable for pregnant women either. These patients with pulmonary artery disease are difficult to diagnose timely.

Endobronchial ultrasound (EBUS) has been used in clinical practice since 2002, and currently is used primarily for transbronchial needle aspiration (TBNA), or EBUS-TBNA, which has been widely used in the diagnosis of mediastinal and hilum occupying lesions and in the lymph node staging of lung cancer (1-3). EBUS has a function of color Doppler flow imaging, which avoids the penetration of the fine needle into the blood vessel. Detection of blood vessel diseases inside the thoracic cavity using EBUS has not been fully determined. EBUS has been used to detect pulmonary artery embolisms with case reports (4-6) and a small-sample study (7). It has also been reported that EBUS could be used to explore various rare pulmonary vascular diseases (8).

The presence of a tumor in the pulmonary vasculature is associated with a high risk for pulmonary embolism, the tumor itself can also cause vascular invasion, as well as the potential for thromboembolism in the blood vessels outside the airway. Therefore, tumor invasion status should be evaluated in patients with suspected chest tumors who have been evaluated using the EBUS test (9). However, EBUS is not routinely used for exploring the blood vessels outside the airway in clinical practice. Moreover, there is no standard process for pulmonary artery exploration, and most endoscopic physicians are not familiar with the vascular anatomy around the airways.

In order to explore the pulmonary arteries outside the airways in a more systematic, comprehensive and effective manner, we sought to establish a process and roadmap for EBUS exploration. The purpose of this study is to help the bronchoscopists to quickly grasp the anatomical structures and imaging characteristics of the pulmonary arteries outside the airways.

The study cohort included patients who underwent EBUS examination between June 2015 and October 2016. The study protocol was approved by the Ethics Committee of Shengjing Hospital of China Medical University (No. 2015PS61J). Informed consent was obtained from each patient before EBUS examination.

All subjects were adults with occupying lesions in the mediastinum or the hilum of the lung initially identified by contrast-enhanced CT or positron emission tomography/computed tomography (PET/CT), and which required further diagnosis by the EBUS-TBNA technique. Patients were excluded if they could not tolerate conventional bronchoscopy and EBUS-TBNA.

The types of CT machines used for the inspection included TOSHIBA Aquilion ONE, SIEMENS SOMATOM Definition, Philips Ingenuity Core 128 and Philips iCT 256 in the current study.

For all subjects, the EBUS equipment (PENTAX EB-1970UK, Tokyo, Japan) and ultrasound system (HITACHI Hi-vision Avius®, Hitachi Medical Systems, Kashiwa, Japan) were used. Equipment parameters: the outer diameter of the insertion part was 7.4 mm, the diameter of the working channel was 2.0 mm, the oblique view angle was 45 degrees, the scanning frequency was 5–10 MHz, and the depth of field was 50 mm. The ultrasound system integrates color Doppler scanning function.

The EBUS examination sites were selected according to the anatomical markers of the airway and the characteristics of the pulmonary artery distribution based on normal contrast-enhanced CT images. The sites of exploration and the route of scanning were established based on the brief pulmonary arteries exploration procedure previously described (7).

EBUS was performed at the Department of Endoscopic Diagnosis and Treatment Center, Shengjing Hospital, China Medical University, using the nasal or oral approach with the patient under local anesthesia and moderate sedation with 2 mg midazolam given intravenously (10). Heart rate and oxygen saturation were monitored continuously. Pulmonary artery exploration was carried out during the treatment of TBNA specimens. Based on the obtained CT images of subjects, we designed the scanning routes and then actual exploration was performed. The EBUS probe was placed first at the distal site of the left/right bronchus, then the pulmonary artery was explored along the line of the adjacent sites. The continuity and integrity of the pulmonary artery were observed. After the examination of one side, the probe was placed at the other side of the bronchus. The ultrasound images of the corresponding sites were saved and the information related to the pulmonary artery was recorded.

Fourteen subjects underwent pulmonary artery exploration using EBUS (8 males and 6 females) with a mean age of 54.8±11.2 years. These subjects were all conformed to the routine indications of EBUS-TBNA examination. In order to avoid detection errors, we only examined the unaffected side of pulmonary artery. B-mode ultrasound was used for 13 subjects, color Doppler ultrasound was used for 10 subjects, and both methods were used for 9 subjects successively. Bilateral pulmonary arteries were explored in 9 cases, and unilateral pulmonary artery was explored in 5 cases. The mean time of exploring each pulmonary artery was 41.95±12.46 s. The procedure leaded to coughing or coughing aggravation in 5 cases (35.7%), and resulted in small mucosal bleeding in 2 cases (14.3%) . Adverse reactions (cough, bleeding, etc.) were mild and examinations were not affected. The procedure was well tolerated (Table 1). 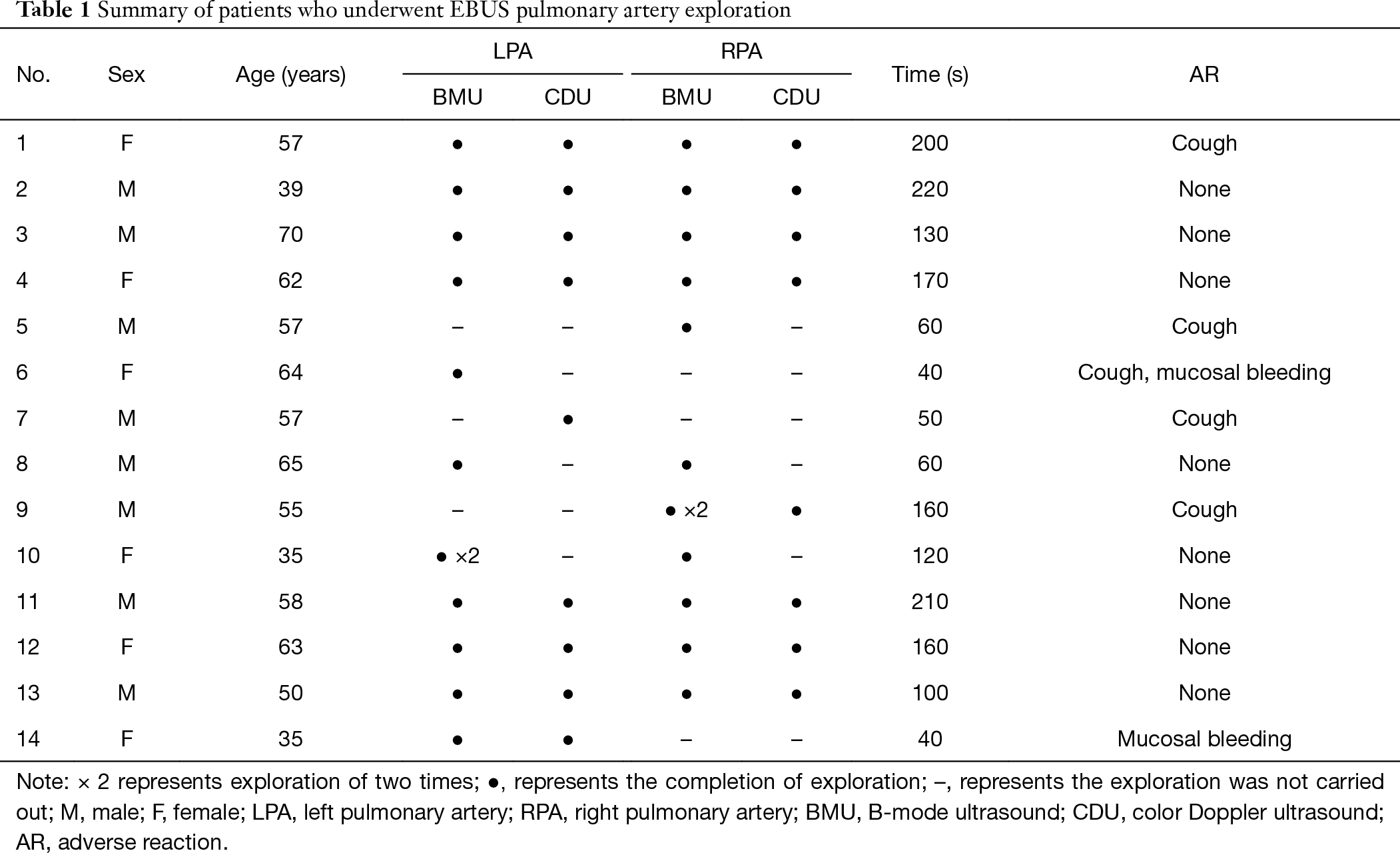 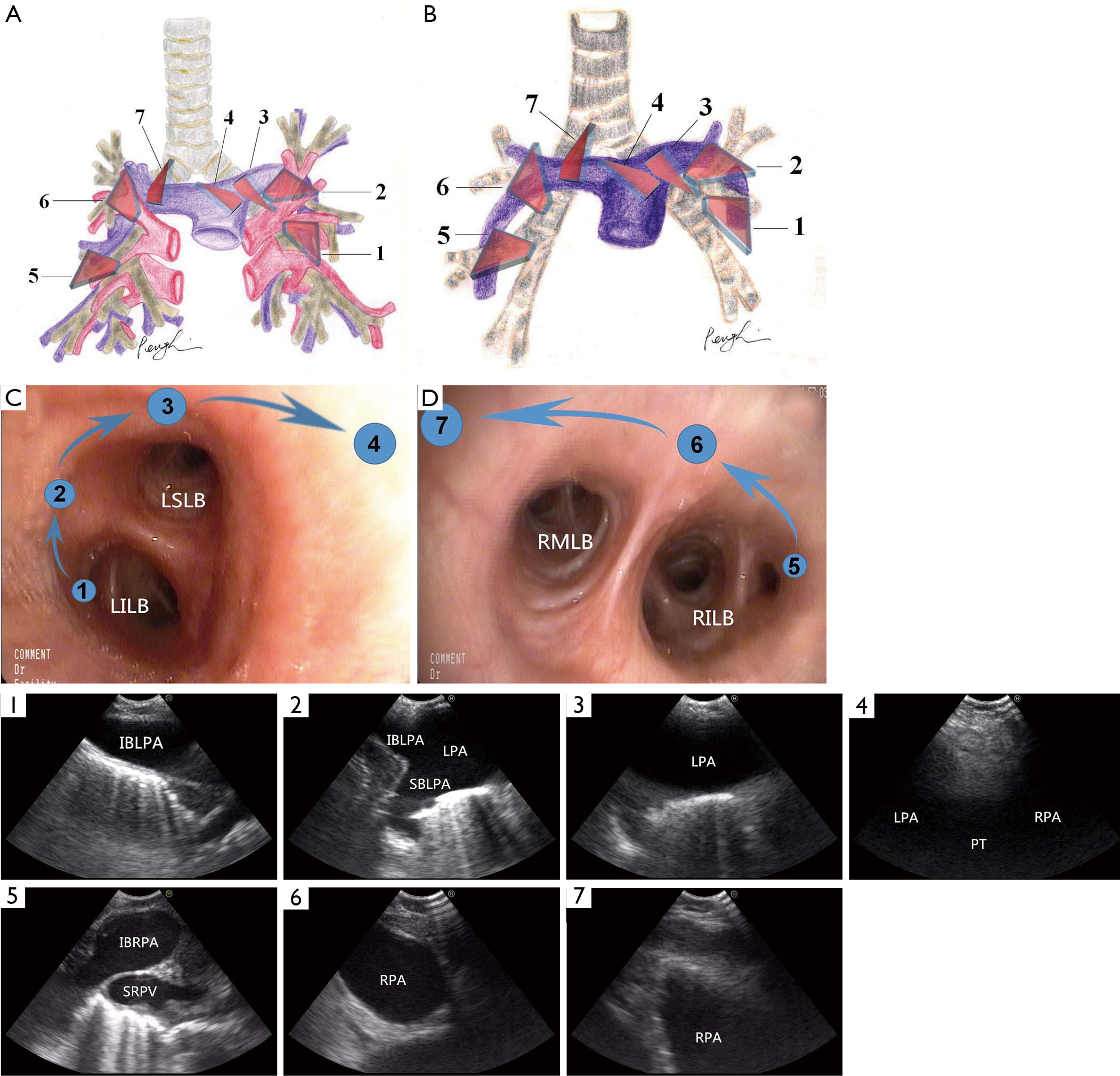 There are some limitations in the exploration of the pulmonary artery by EBUS. (I) In this study, the imaging quality of the probe could not be closely fitted to the airway sometime because of no water sac used, and the imaging quality would be improved if the water sac was applied (29). (II) The diameter of the EBUS probe is generally about 7 mm, which is larger than the ordinary bronchoscope, and thereby the probe is difficult to enter the lobar bronchus. One study reported that EBUS could explore a bronchus with a diameter ≥4.5 mm (30). EBUS probe entering each of the finer bronchus will increase mucosal damage and patient discomfort, so its advantages and disadvantages need further study. Because of the limitations mentioned above, the pulmonary embolism located in the pulmonary artery around the lobar and finer bronchus might be missed. (III) Due to the limitation in the flexibility of the EBUS equipment, exploration of some bronchi, such as the bilateral upper lobe bronchi, is difficult. The probe is often unable to fit tightly against the wall of the airway, which results in failed imaging of the pulmonary artery outside the airway. (IV) The pulmonary trunk is not located near the airway, and imaging of it was not clear under the EBUS, and thereby embolism in pulmonary trunk may be missed. (V) Similar to other ultrasound probes, the EBUS probe may induce artifacts during the exploration. Especially, multiple reflections and side lobe artifacts are easily misdiagnosed as pulmonary artery abnormalities, and beginners should pay enough attention to that.

Ethical Statement: The study was approved by the ethics committee of Shengjing Hospital of China Medical University (No. 2015PS61J). Written informed consent was obtained from all patients.