There is great potential for stem cells to improve cardiac remodeling and restore cardiac function, although a recent systematic review highlights the heterogeneity of results with stem cells in myocardial regeneration (2). Intracoronary injection of autologous bone marrow derived-mononuclear cells after PCI in patients with ST elevation myocardial infarction (STEMI), improves left ventricular ejection fraction (3), but this finding is not universally reported (4). Inconsistencies in methodologies, cell population use, and delivery methods likely contribute to these conflicting data.

MSCs are a reasonable candidate for cardiac stem cell transplantation. They can be easily isolated and grown over several passages and demonstrate directed multilineage differentiation. MSCs have decreased levels of MHC II expression compared to MHC I indicating low immunogenicity. This coupled with their immunosuppressive effects allow for successful allogenic transplantation.

Stem cell retention and survival remains a challenge in a microenvironment of infarcted tissue. Preparation of stem cells prior to intracoronary or intramyocardial injection is important to enhance cell survival. Stem cells lose matrix attachments such as integrin molecules during preparation, which leads to apoptosis-mediated cell death. The hypoxic and pro-inflammatory microenvironment of infarcted myocardium also induces apoptotic signaling. Seeding of stem cells in bioscaffolds prior to transplantation, and pre-treatment of infarcted myocardium with transmyocardial laser revascularization (TMLR) or shockwave therapy are potential novel therapies to increase stem cell retention and survival in an ischemic microenvironment.

The role of bioscaffolds

Seeding of stem cells in three-dimensional structures of heart extracellular matrices (ECM) or ECM-like biomaterials can promote tissue repair and regeneration. The porous or fibrous preformed bioscaffolds are commonly used for cell delivery where cells are planted on patches before surgically attaching the patch to the epicardial surface. We have used organic acellular ECM derived from porcine small intestine mucosa as an interim bioscaffold onto which native cells can migrate and replace foreign ECM with permanent collagen and structural proteins to promote scar remodeling (11). 3D alginate scaffolds are made using hydrogel material derived from algae-based polysaccharides and can also be used to augment cell seeding and delivery. Cardiac patches with human MSC (hMSC) and rat type 1 collagen matrix show improvement in myocardial remodeling after infarction in a rat model (12). In this model, Simpson et al. observed a decrease in LV end systolic dimension and an increase in LV fractional shortening by 30%; however, hMSC were not detectable four weeks after patch application. Through modification of cytoskeletal structure and provision of a graftable milieu, bioscaffolds with ECM is a promising strategy for myocardial regeneration.

The role of transmyocardial laser revascularization

Since the 1980s, TMLR has been an option to treat refractory angina for patients who are not candidates for revascularization. TMLR is a surgical procedure where several channels are generated within the myocardium using a laser power source. Typically, 20-40 channels are created depending on the size of infarct. Currently, the FDA has approved two laser devices for surgical use: the carbon dioxide (CO2) (PLC Medical Systems, Franklin, MA, USA) and holmium:yttrium-aluminium-garnet (Ho:YAG) (CardioGenesis Corporation, Foothill Ranch, CA, USA) systems.

TMLR is thought to induce neovascularization, which may account for its long term clinical improvement and cardio-protection. Histological specimens from deceased patients who had undergone TMLR show a transformation from early necrosis and inflammation to fibrous scarring and increased capillary networks (13). This angiogenic effect is specific to laser systems that cause tissue injury, with sham- or excimer-lasers causing no vascular response in a swine model (14). In a recent meta-analysis, TMLR was shown to improve myocardial perfusion when assessed by PET imaging (15).

Because of the potential for angiogenesis with TMLR, we posit that TMLR may potentiate the effects of stem cells on myocardial recovery. In a rat infarct model, pre-treatment with TMLR prior to administration of MSCs increases angiogenesis and improves cardiac function (16). In a rat model of myocardial infarction, TMLR improves homing, engraftment and increases early cell survival of circulating MSCs (17). In humans, treatment with TMLR prior to intramyocardial stem cell injection is a feasible and safe technique and is associated with a reduction in ischemia and improved functional capacity (18).

The mechanism by which TMLR improves cell homing, engraftment and early survival is uncertain. TMLR may create a favorable microvascular environment for stem cells to survive once implanted into scar tissue. Further, the channel conduits may increase cell implantation prior to channel closure. Pro-survival cytokines and growth factors from TMLR induced inflammation zones may also enhance stem cell survival. TMLR alone directly contributes to myocardial regeneration through upregulation of specific transcription factors that enhance epithelial to mesenchymal transition (EMT) (19). Epicardial EMT promotes the formation of cardiac progenitor cells and lineage commitment. The result of this biological process is the production of endothelial cells, smooth muscle cells and even cardiomyocytes, all of which are involved in cardiac tissue repair and regeneration.

Overall, the regenerative capabilities of stem cells combined with TMLR appear synergistic for recovery and regeneration in the setting of ischemic cardiomyopathy.

The role of shockwave therapy

Low energy shockwaves are special acoustic waves that can be focused on specific regions of the body to cause local vasodilation angiogenesis (20). Myocardial shock wave therapy is delivered via extracorporeal cardiac shock waves (ECSW) or direct epicardial shock (DES). ECSW is a non-invasive treatment where acoustic waves are applied to selected areas of the heart under echocardiographic guidance. This process risks lung injury and is restricted to certain areas of the heart due to the narrow acoustic window to the heart. Alternatively, DES avoids lung complications and permits accessibility of the whole heart. The main limitation for DES is that it requires surgical access, and therefore is generally limited for use in patients undergoing cardiac surgery.

Clinical studies show shock wave therapy to be a safe and feasible option to provide symptomatic relief and increased myocardial perfusion in patients with refractory angina not amenable to revascularization (21). Shock wave therapy may also have some regenerative properties for the ischemic myocardium. In a porcine model of ischemic cardiomyopathy, shock waves improve ejection fraction, wall thickening fraction and regional myocardial blood flow of the ischemic region (20). In a rat model of ischemic cardiomyopathy, the application of a low-energy epicardial shock wave improves left ventricular ejection fraction, induces angiogenesis and causes a decline of N-terminal prohormone B-type natriuretic peptide (22). In human studies, extracorporeal shock wave therapy improves left ventricular ejection fraction and functional capacity in patients with ischemic cardiomyopathy (23). Shock wave therapy also improves SPECT stress and rest perfusion scans suggesting an angiogenic-mediated mechanism underlying the cardiac repair and regeneration (23). Although treatment with shockwaves in isolation for myocardial regeneration is encouraging, there is a paucity of data combining shockwave therapy with stem cell transplantation. This is an area that holds much promise and provides an exciting direction for future research.

The role of mechanical circulatory support in myocardial recovery

Mechanical circulatory support devices are a therapeutic option for patients with terminal heart failure and may provide a means for cardiac recovery (24). Technological improvements, miniaturization of next-generation devices, as well as minimally invasive implantation techniques have led to lower complication rates and improved long-term durability (25-28). In the clinical setting of decompensated heart failure, early reports suggest that mechanically unloading the heart provides a more favorable environment for stem cell engraftment (29).

Research into regenerative therapies for heart failure has been largely frustrating, and a successful stem cell strategy remains elusive. New techniques to improve stem cell survival and retention may act to potentiate the regenerative properties of stem cells. The combination of hMSCs, bioscaffolds, and pre-treatment with TMLR or shockwaves may create the optimal environment for stem cell graft retention, angiogenesis, and myocardial regeneration (Figure 1). Early reports of its application in humans have been promising (30). In a field of cardiovascular research that has had few successes, we believe this hybrid therapy may pave the way for more promising results. 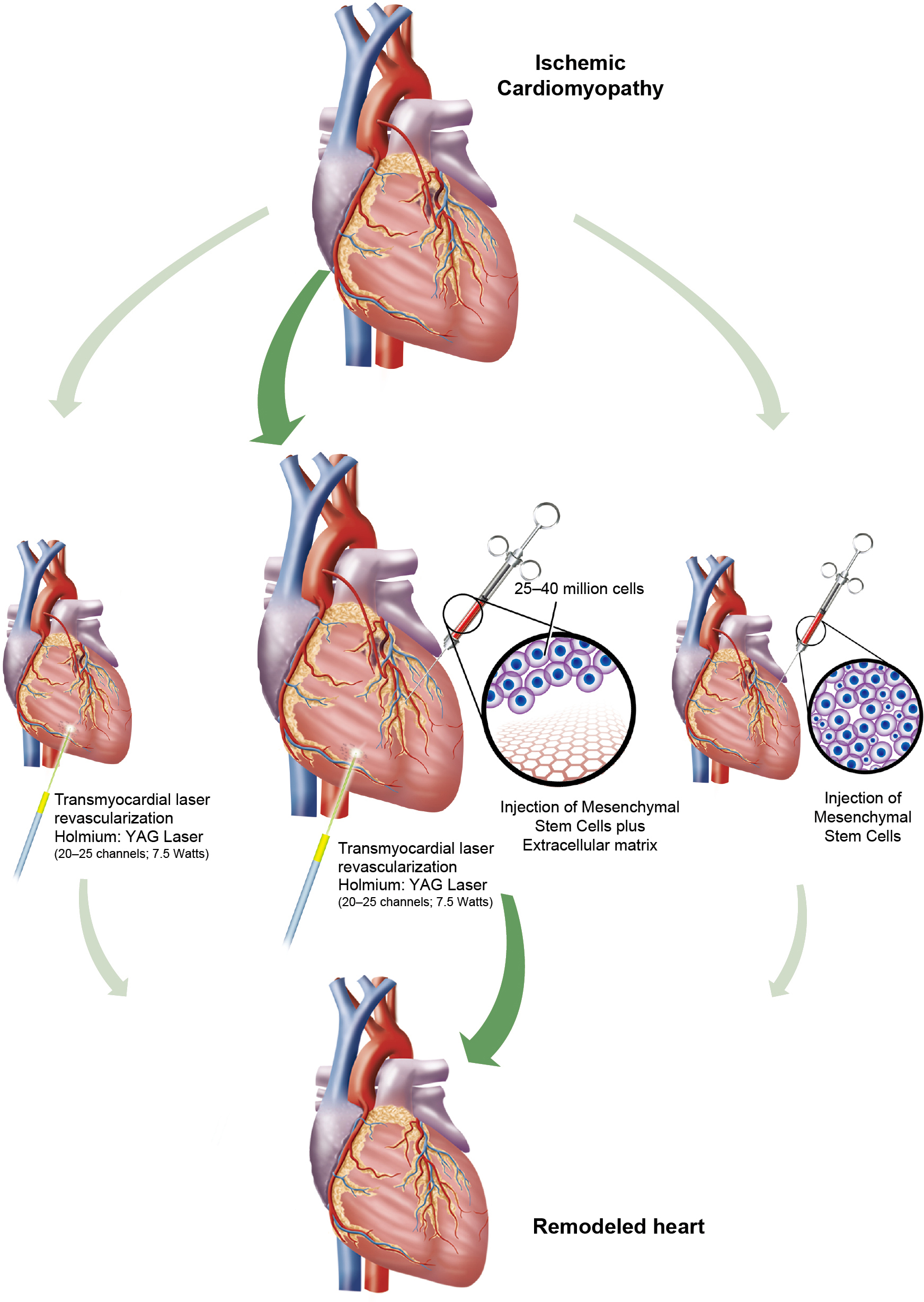