Smoking makes pulmonary tissue diffusely prone to cancer development (“field cancerization” theory) (1,2). Accordingly, smokers and former smokers can develop multiple lung cancers in their lives. Available data on multiple primary lung cancers (MPLC) derive mainly from surgical series (3). However, low-dose computed tomography (LDCT) screening can provide an alternative source of information about MPLC. To the best of our knowledge, so far this has not been thoroughly addressed. We reviewed the occurrence and type of MPLC in subjects undergoing LDCT screening in the ITALUNG randomized clinical trial (4).

ITALUNG is a randomized clinical trial carried out in Italy evaluating efficacy of LDCT screening in reducing lung cancer mortality as compared to “usual care” (5). The study was conducted in compliance with the Helsinki Declaration (http://www.wma.net/en/30publications/10policies/b3/index.html) and the study protocol was approved by the Local Ethic Committees of the participating centers (Firenze, approval number 29–30, 30 September 2003; Pisa, number 23, 27 October 2003; Pistoia, number 00028543, 13 May 2004). Each subject provided an informed written consent to participate to the study.

Follow-up data at 8.5 years in ITALUNG indicated that LDCT screening could reduce lung cancer and overall mortality (4). In the actively screened arm, 1,406 smokers or former smokers (910 men with mean age of 61.1 years and 496 women with mean age of 60.6 years) underwent annual screening LDCT at baseline and in the next 3 years.

In ITALUNG the subjects with screen-detected primary lung cancer entered follow-up with contrast-enhanced full-dose head, chest and abdomen CT that was performed every 6 months for the first 2 years and annually for 3 years thereafter. All subjects with screen-detected primary lung cancer had completed the 5 years of follow-up CT at the time of writing.

For identification of MPLC in ITALUNG we applied a three step procedure (see below) and the criteria proposed by Shen et al. (8) that define 3 types of lesions: (I) those that share the same histology but are distributed in different pulmonary lobes, in absence of N2, N3 or systemic metastases; (II) those that show different histological or molecular-genetic characteristics and arise separately from foci of carcinoma in situ; (III) those that share the same histology but are separated by at least 4 years interval and without systemic metastases between the detection of multiple tumors.

Eight subjects were diagnosed with multiple lung cancers during LDCT screening or full-dose CT follow-up. Two had multiple secondary lesions (from renal cancer and colorectal cancer) detected at LDCT and diagnosed at FNAB. Six subjects were ultimately diagnosed with MPLC (overall =16:2 in three subjects, 3 in two subjects and 4 in one subject) (Table 1 and Figures 1,2). They represented 15.8% (6/38) of all subjects with at least one screen-detected primary lung cancer. 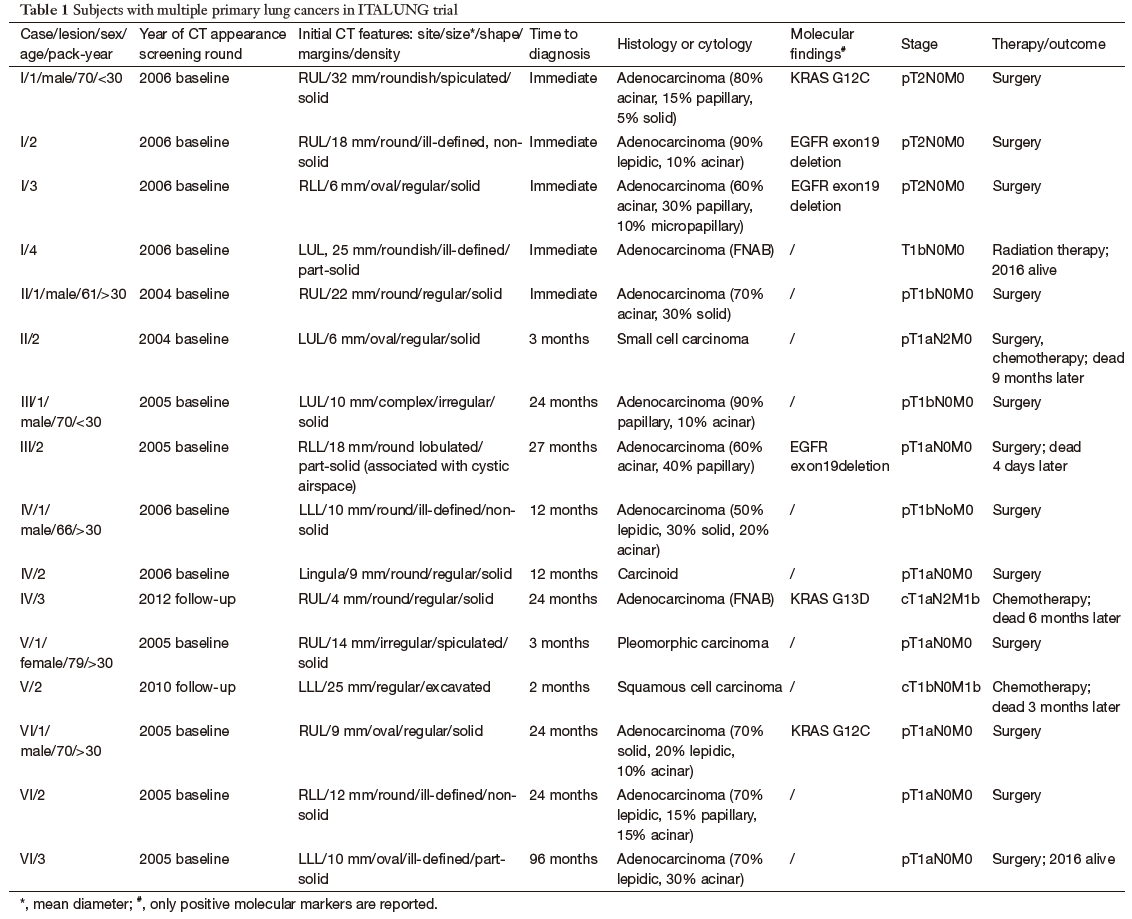 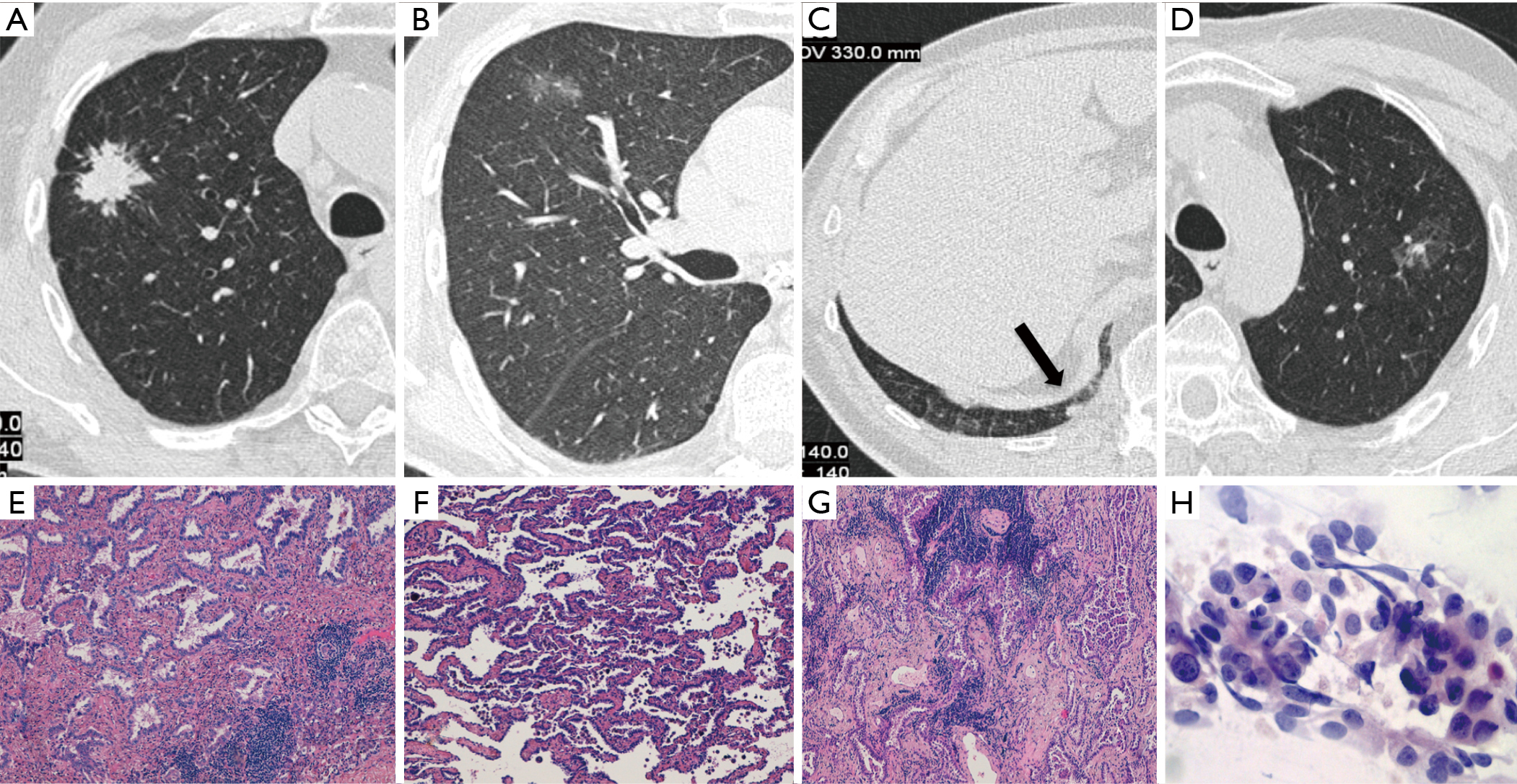 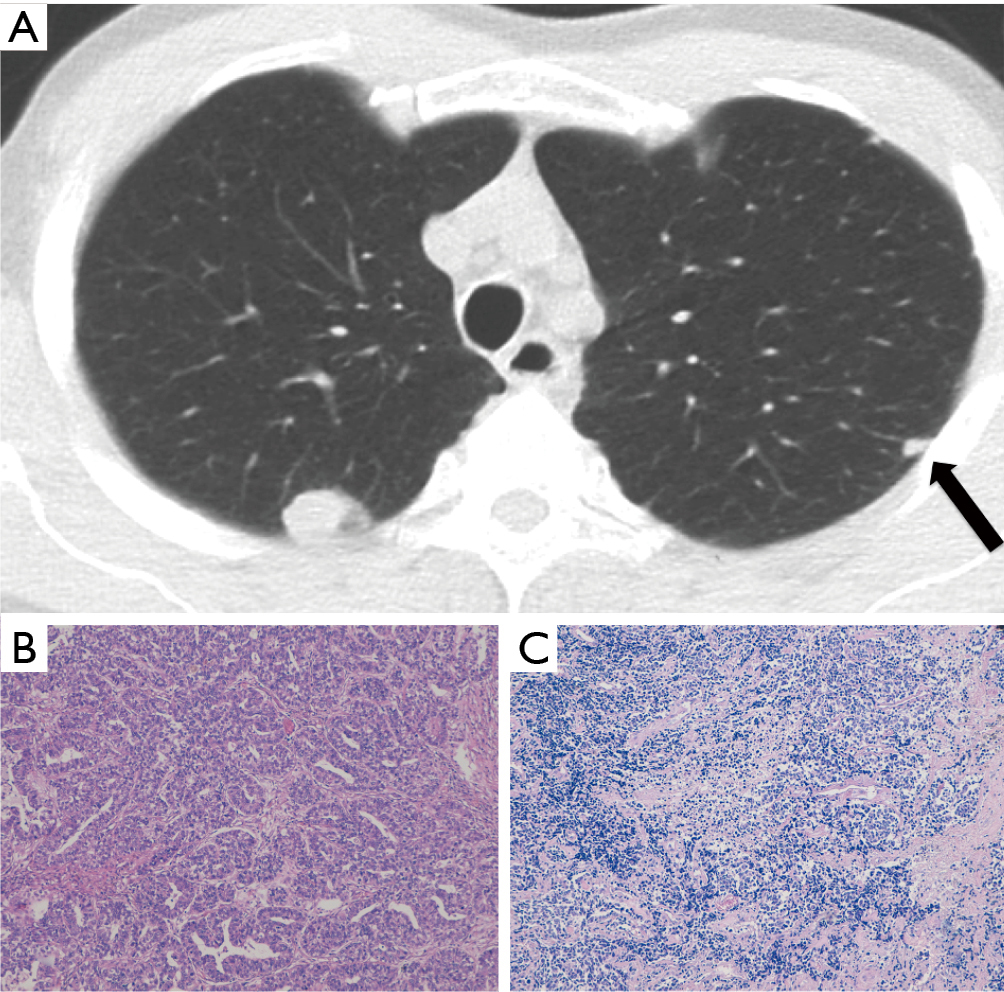 Figure 2 Case II (Table 1). Adenocarcinoma and small cell lung cancer in a 61-year-old smoker both detected at baseline LDCT screening round. They appeared as a rounded lung nodule in the RUL and a subpleural small solid nodule (arrow) in the LUL (A). Haematoxylin and eosin histologic staining demonstrate invasive adenocarcinoma, acinar predominant (original magnification ×200) (B) in the RUL lesion and small cell lung carcinoma (original magnification ×100) (C) in the LUL lesion.

Fourteen of 16 MPLC were observed during LDCT screening in four subjects and 2 during full-dose CT follow-up in two subjects. All the former were already present at baseline LDCT examination (Figures 1,2) and may be considered as synchronous lesions. The latter appeared during follow-up CT 5 and 6 years after surgical removal of the first lesions and may be considered metachronous lesions. Overall, MPLC appeared in the LDCT or follow-up CT in which they were retrospectively identified for the first time as solid (n=9), partially solid (n=3), non-solid (n=3) or excavated (n=1) lesions with regular (n=7), ill-defined (n=5), spiculated (n=2), irregular or lobulated (n=2) margins. Their initial size ranged between 4 and 32 mm (mean diameter 14.4±8.1 mm).

Data about occurrence of MPLC in observational or randomized LDCT screening studies are fragmentary and summarized in Table 2. At least one subject with MPLC was reported in 11/33 studies (5,13-18,24-35), with a mean cumulative frequency of 0.18% (136 subjects) in 71,901 screenees and of 11.6% in 1,170 subjects with at least one screen-detected lung cancer (19-23,36-44). The MPLC were considered synchronous in 123/136 (90%) subjects and metachronous in 13 (10%). Unfortunately, in many cases the time of lesions appearance and histological diagnoses were not available. Moreover uncertainties and intervening modifications of the staging system of lung cancer and unavailability of morphologic and genetic/molecular features hinder recollection of information about MPLC in previous reports of LDCT screening (and surgical series). In particular, multiple pulmonary nodules may have been considered stage III or IV tumors (18), and this may have led to under-reporting of cases of MPLC, especially in case of multifocal adenocarcinoma. 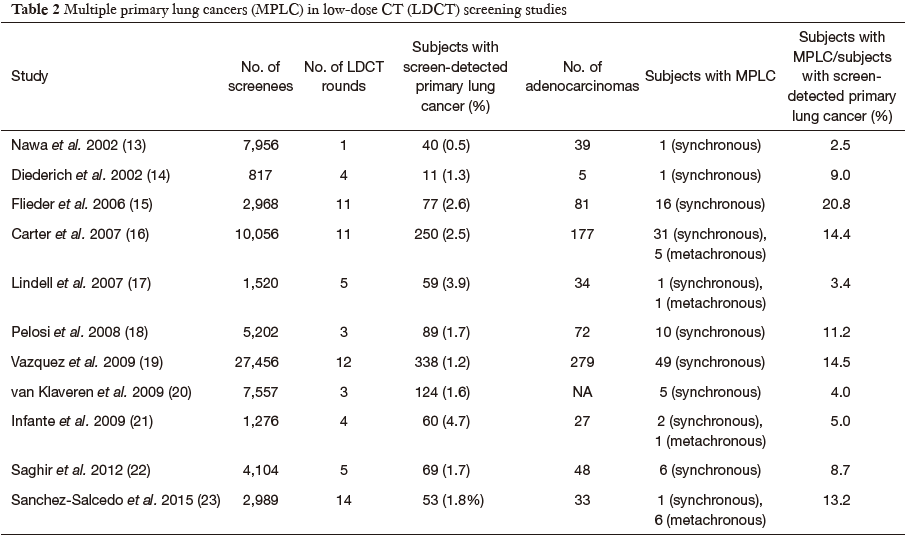 In the active arm of ITALUNG, after the 4 years of active screening and 5 years of follow-up we observed few subjects (n=6; 0.43% of the screenees) harboring or developing MPLC. However they represented 15.8% of all those subjects with at least one screen-detected primary lung cancer. These percentages are in line with those reported in LDCT screening studies (Table 2).

In our series, adenocarcinoma was the most frequent histotype. This is in line with the type of primary lung cancers that are discovered by LDCT (Table 1) and in a previous study (18). Despite the small numbers of MPLC cases in our study that indicates need of further studies, two scenarios may be drawn. The first deals with morphological and molecular/genetically heterogeneous multifocal adenocarcinomas. The second deals with combination of adenocarcinoma with others histological types including small cell lung cancer, carcinoid and squamous cell cancer. Only one case of double squamous lung cancer was reported (23). As in previous reports (19,22), most (14/16 lesions in five subjects) of the screen-detected MPLC in ITALUNG were present at baseline and were diagnosed after further LDCT screening rounds, because of increased size or density (12,17,27).

Remarkably, our two patients with synchronous multifocal adenocarcinoma with 4 and 3 lesions, respectively, were alive many years after lesion treatment. This is consistent with the view that multifocal adenocarcinoma can behave as indolent lesion that should not be confused with aggressive primary lung cancers with intrapulmonary metastases (18). Awareness of this possibility may have significant impact on management of multiple lesions detected at LDCT screening that is currently recommended in the US (39) and is under evaluation in Europe (4).

In ITALUNG after a median follow-up time of 8.5 years, we observed 2 metachronous cancers during full-dose CT follow-up, which were both fatal. Obviously, longer surveillance is expected to increase the yield of metachronous MPLC. In fact one LDCT study reported 6 cases of metachronous MPLC in 2,989 screenees followed for 14 years (23).

Prevalence of MPLC in 18 surgical series outside screening (mean range, 1.1–8.6%) (3) was lower than the frequency in LDCT screening studies reporting at least one such a case. This is not surprising since subjects undergoing LDCT are asymptomatic and prone to show developing cancers in their earlier stages.

Occurrence of MPLC in a single subject per se suggests the possibility of genetic predisposition. However search of genetic features associated with lung cancer (45) was beyond the scope of the present report.

Admittedly, since our study is based on cytopathologically or histopathologically proven primary lung cancer, it is possible that we underestimated MPLC in the cohort of subjects undergoing LDCT screening. In particular, lesions presenting as pure ground glass opacity that can be associated with minimally invasive adenocarcinoma (9) may be missed.

In conclusion, MPLC, mostly adenocarcinomas, are not uncommon in smokers and former smokers with at least one LDCT screen detected primary lung cancer. The potential distinction of two subtypes of MPLC, represented by multifocal adenocarcinomas and by combination of adenocarcinoma with others histological types, having different prognoses and treatment implications warrants further study.

Funding: The study was supported by the local government of Tuscany (Decree N. 1014 of 02.25.2004) and by a Research Grant of the Italian Ministry of Education University and Research (PRIN 2003) to Professor Mario Mascalchi. The funding source had no role in study design, in the collection, analysis and interpretation of data; in the writing of the report; and in the decision to submit the article for publication.

Ethical Statement: The study was conducted in compliance with the Helsinki Declaration (http://www.wma.net/en/30publications/10policies/b3/index.html) and the study protocol was approved by the Local Ethic Committees of the participating centers (Firenze, approval number 29–30, 30 September 2003; Pisa, number 23, 27 October 2003; Pistoia, number 00028543, 13 May 2004). Each subject provided an informed written consent to participate to the study.