Improvements in cardiac care of children with congenital heart defects have led to increasing numbers of long-term survivors reaching adulthood. Approximately 85% of babies born with heart defects can now be expected to reach adulthood (1). Adults with congenital heart disease are at increased risk of death compared to the general population (2,3). Among those with the highest risk for sudden cardiac death (SCD) are patients with dextro-transposition of the great arteries (dTGA) following Mustard/Senning procedure and patients with congenitally corrected transposition of the great arteries (ccTGA) (2,4-6). Therapy with an implantable cardioverter defibrillator (ICD) has been shown to prevent SCD in a wide range of patients at risk (7,8). Here we report our single center long-term experience with ICD therapy in patients with dTGA or ccTGA.

All ICD carriers with surgically corrected dTGA and burdened right ventricle or with ccTGA who were in active follow-up at our institution in November 2013 were included. Past medical history and ICD follow-up data were obtained retrospectively from hospital records. All patients were then followed until December 31, 2015. Endpoint of follow-up was death, heart transplant or implantation of a ventricular assist device. Follow-up was also terminated for explantation of the ICD or for battery depletion without generator replacement.

The study conforms to the Declaration of Helsinki. The requirement of informed consent for this observational study was waived by the institutional committee on human research.

Device parameters changed over time, reflecting physician-tailored programming in response to individual arrhythmia burden. Therefore, we report the first permanent device programming (defined as the setting active after the 3-month follow-up) of the first pulse generator. Where detection duration was given in seconds, as in Boston Scientific or former Ventritex devices, detection interval counter was calculated using the programmed detection rate. Detection interval counter cannot be changed in totally subcutaneous ICDs (S-ICD) and is therefore reported as per manufacturer settings, 18 out of 24 intervals, for these devices (9).

Data are reported as mean ± standard deviation or median and interquartile range (IQR), depending on normality of distribution. Continuous variables were compared using the two-sided unpaired Student’s t-test. Homogeneity of variance was tested using Levene’s test with P<0.1 considered heterogeneous. The 95% confidence intervals (CI) are given where appropriate. Chi-square test and Fisher’s exact test were used for comparison of categorical variables. A P value <0.05 was considered statistically significant. Mean time to events was calculated using a Kaplan-Meier analysis. Drug effects on the cycle length were calculated using a univariate linear model. Estimated marginal means of the cycle length adjusted to a monotherapy of the individual drug are reported. All calculations were performed using SPSS 23 (SPSS Inc., Chicago, IL, USA).

Fourteen ICD carriers with transposition of the great arteries or congenitally corrected transposition were included in the analysis. Median follow-up duration was 5.0 years (IQR, 2.2–15.1 years). Cumulative follow-up added up to 113.5 patient-years. Patient characteristics are shown in Table 1. 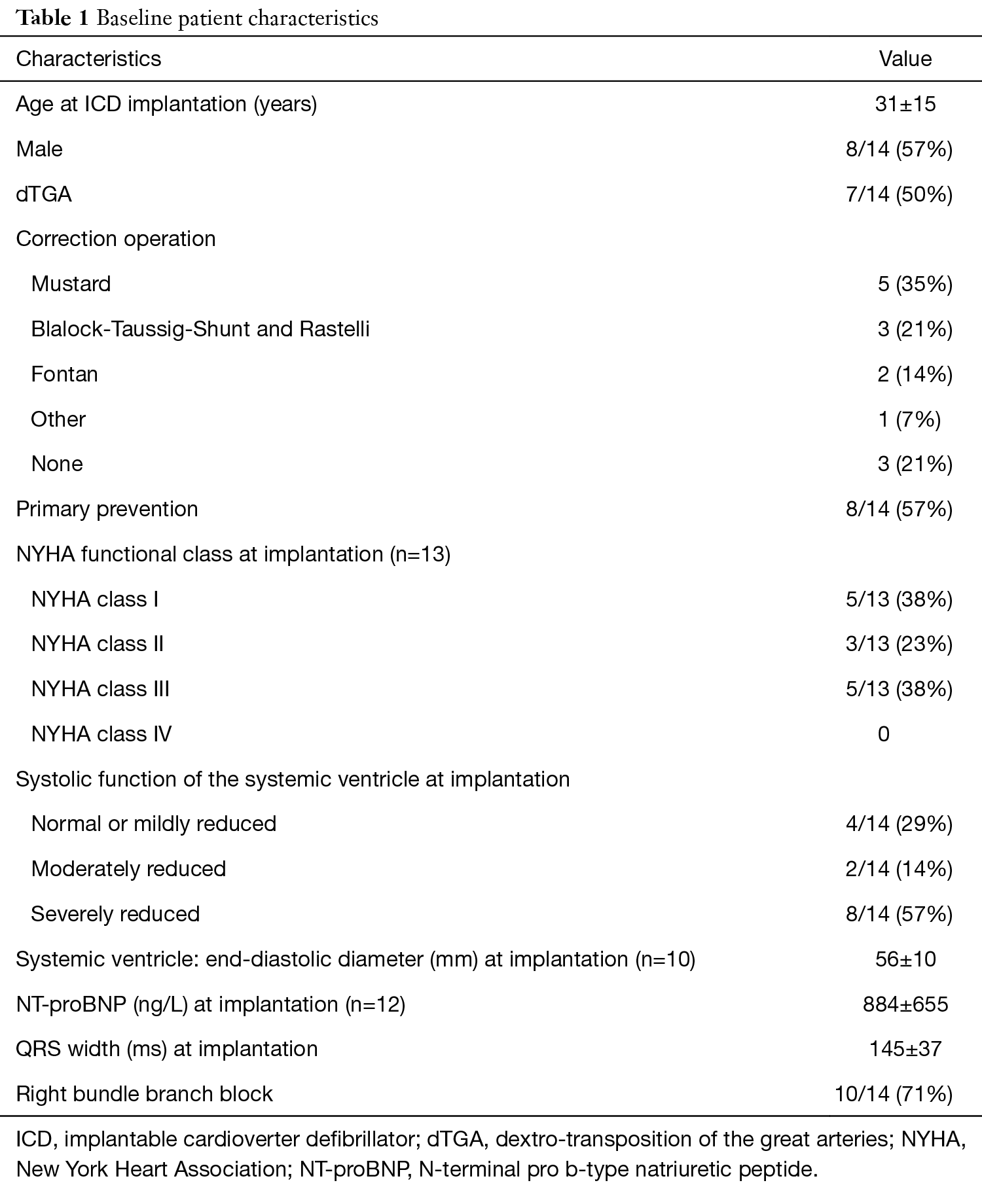 Of the 14 patients initially identified and followed-up, 3 reached an endpoint of follow-up between November 2013 and December 31, 2015. One patient died suddenly due to massive pulmonary embolism. Another patient received a ventricular assist device. The third patient declined generator exchange at the end of battery life. This patient had experienced multiple inappropriate shocks for atrial fibrillation before. There were no arrhythmic deaths during follow-up.

Including pulse generator exchanges and lead revisions, 28 devices were implanted in 30 operations. Single chamber ICDs were implanted in 5 patients (36%), dual chamber ICDs in 6 patients (43%) and a CRT-D system in one patient (7%). Two patients (14%) received an S-ICD. Initial Device programming is shown in Table 2. In 11 patient 2 zones (VT and fast VT/VF) were programmed, while 3 devices (all implanted before the year 2000) were programmed to a single (VF-) zone. 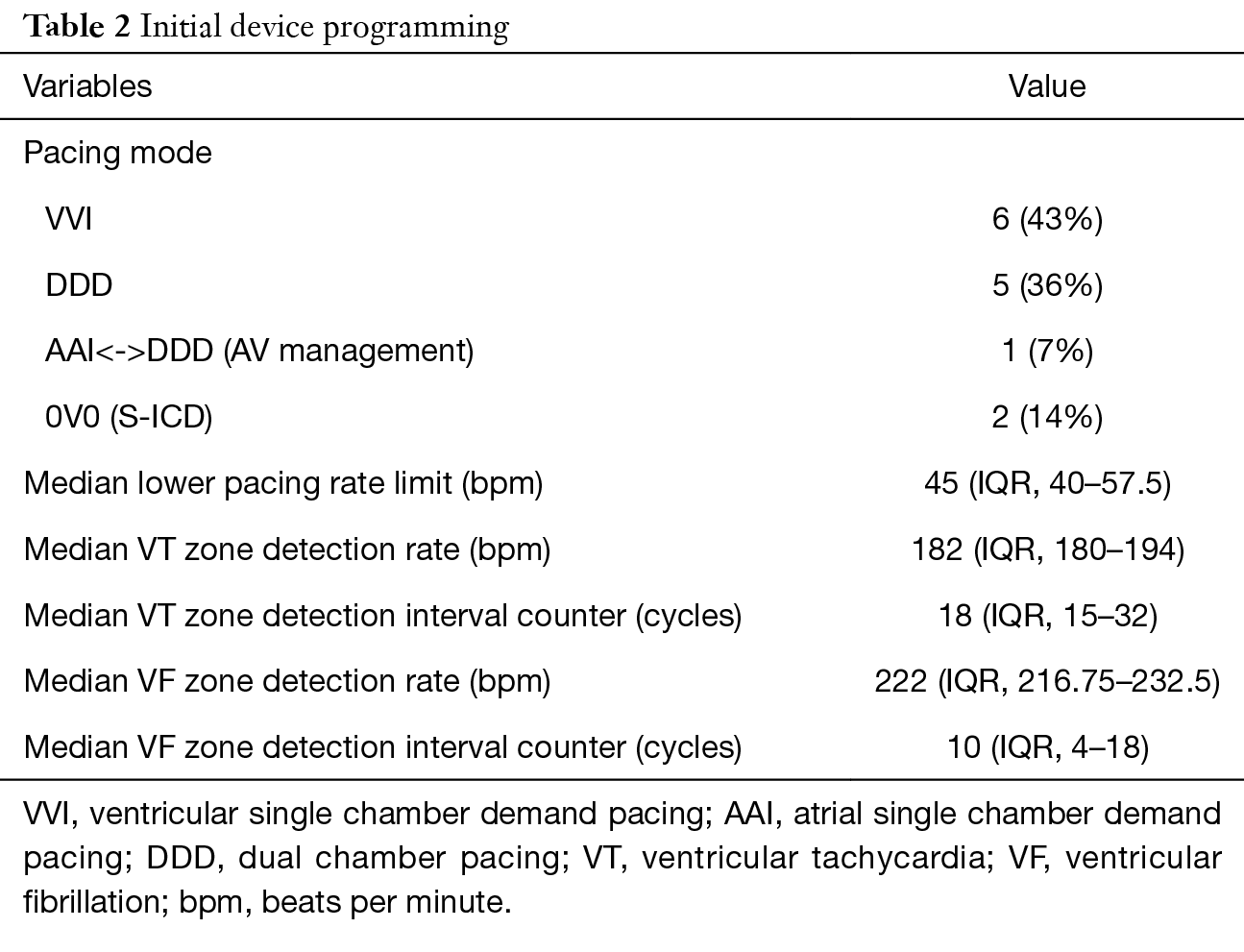 A total of 177 ventricular episodes occurred during follow-up. At least one ATP was delivered in 128 episodes (72%) (Figure 1). ATP was successful in 102 episodes (80% of episodes treated with ATP). Twenty-two of the episodes with unsuccessful ATP were terminated by ICD shock. Six arrhythmias were not treated successfully by the ICD: 3 hemodynamically stable slow VTs decelerated below detection rate after the last ATP without termination. Two other slow VTs had a rate near the detection rate undulating at the VT cut-off rate, being detected as non-sustained arrhythmia without ICD therapy attempt. These arrhythmias were hemodynamically well tolerated by the patients. Another episode consisted of a VT occurring while the patient was hospitalized at the ICU. ATPs accelerated the VT into ventricular fibrillation which was defibrillated externally before an ICD shock could be delivered. 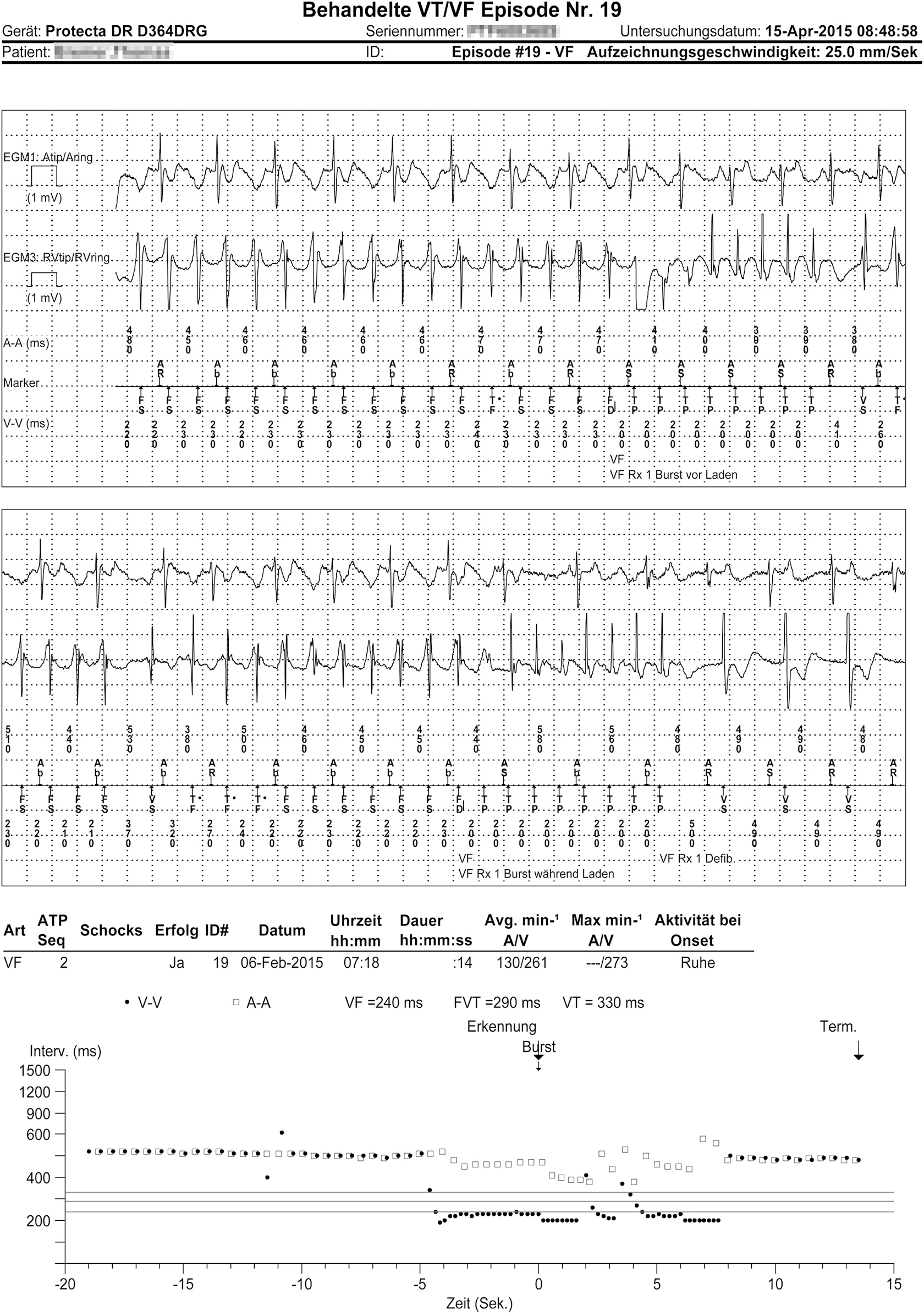 Figure 1 Example of a fast VT (230 ms) in a patient with dTGA after Mustard’s correction. IEGM channels show (from top to bottom) atrial IEGM, ventricular IEGM and marker channel. The second ATP attempt (center panel) terminates the arrhythmia. A beat-to-beat cycle length plot of the complete episode is shown in the bottom panel.

Overall 69 (39%) episodes were treated by high voltage shock, either as first line treatment or after failed ATP. All shocks were successful in terminating the ventricular tachyarrhythmia.

Grown-ups with congenital heart disease carry an increased overall mortality and an up to 100-fold increased risk for SCD compared to the age-matched normal population (2,5). In a large population-based study of the late SCD risk after operation for several congenital defects, SCD risk varied highly among patients with different pathologies. While the SCD risk in patients with left-to-right intracardiac shunts or pulmonary stenosis was comparable to the risk of the general population, an increased incidence of SCD in patients with aortic stenosis or dTGA was observed. The incidence of SCD in this group was estimated to be approximately 5/1,000 patient-years (5). A more recent study of 936 adults with congenital heart defects reported an even higher incidence of sudden cardiac arrest (SCA) of 9.5/1,000 patient-years in dTGA and 25/1,000 patient-years in ccTGA, being the single defect with the highest risk in the study (6). As in other heart failure cohorts, ICDs proved highly effective for the prevention of arrhythmic death in the present study. However, competing risks of death in heart failure need to be considered as well, and selected patients might be candidates for mechanical support (10-12).

The largest retrospective multicenter study of ICD therapy in grown-ups with congenital heart defects to date was reported by Koyak and co-workers in 2012 (13). Of 136 patients in this study, 51% suffered from tetralogy of Fallot, 20% septal defects, and 13% (18 patients) ccTGA. Thirty-nine patients (29%) received appropriate therapies. Khairy and colleagues reported a retrospective multicenter study of 37 ICD carriers with Mustard/Senning-corrected dTGA (14). Twelve patients received appropriate therapies within a median follow-up of 3.6 years. In addition, two smaller series of patients with dTGA after atrial-switch repair and ICD were recently published. In the first series, 1 ICD discharge occurred in 12 patients with primary prevention ICD indication during a follow-up of 3.5 years (15). The other was especially remarkable for a massive burden of inappropriate shocks, reporting 34 ICD shocks in 11 patients with only one true VT/VF event (16). In the present study, ventricular tachyarrhythmias with appropriate ICD therapy occurred in 64% of patients, more than doubled compared to previous reports. This is probably due to the longer follow-up duration in our cohort. Another difference of the present study is that we included patients with dTGA as well as patient with ccTGA. The risk of SCD/SCA in ccTGA is even higher than in surgically corrected dTGA. We chose to include patients with both types of TGA in our analysis to represent the real world situation at our institution. ccTGA is rare with an incidence of approximately 1:33,000 in comparison to dTGA (1:3,500–5,000 live births), but accounts for half of the patients in our cohort (17,18).

While ATP is highly effective in patients with ischemic or non-ischemic cardiomyopathy, the scarce data available to date suggested only marginal efficacy in patients with TGA (21-23). In the study by Koyak and co-workers, only 5 of 26 ATP attempts in patients with diverse congenital heart defects were effective (13). In contrast, ATP was highly effective in our cohort with success rates comparable to patients with ischemic or non-ischemic cardiomyopathy or other types of congenital heart disease (mainly Tetralogy of Fallot) (23,24). Mean cycle length was 277 ms in TGA patients reported by Koyak compared to 310 ms in our population. Although we observed no significant influence of the tachycardia cycle length on ATP success in our patients, shorter cycle lengths in the Koyak study could indicate a higher proportion of ventricular fibrillation or polymorphic fast VTs as opposed to monomorphic ventricular tachycardia episodes.

The observed high efficacy of ATP in these patients has profound clinical implications: First, the programming of ATP is highly recommended to avoid unnecessary shocks. Second, the choice of transvenous vs. S-ICD systems should be made with care. Depending on concomitant heart defects or prior operations such as tricuspid valve replacement, transvenous lead positioning may be complicated or impossible. In such patients the S-ICD may be preferable or may even be the only option. On the other hand, given the high efficacy of ATP, the lack of ATP capabilities is a major drawback of the S-ICD.

The main limitation of the present study is the sample size. This is offset by the long follow-up duration covered, resulting in the largest number of arrhythmia episodes in this patient group reported to date. The chosen design of identifying all active patients at a certain point in time, collecting retrospective data and then following them prospectively for another 2 years might be a cause of selection bias towards long-term survivors. However the current design allowed collection of a large number of ventricular tachyarrhythmias.

In a contemporary cohort of dTGA and ccTGA patients with ICD, we observed a high proportion of appropriate ICD therapies for ventricular tachyarrhythmias. Over a period of up to 15 years (median 5 years) almost two thirds of all patients received appropriate therapies. ATP is highly effective in this population and should therefore be programmed whenever possible. This is important when considering risks and benefits of transvenous ICDs versus S-ICDs, which might be favorable in patients with altered anatomy but lack ATP capabilities.

Ethical Statement: The requirement of informed consent for observational studies was waived by the institutional committee on human research.