Most intrathoracic goiters are found in the superior and anterior mediastinum (1). They are usually resected through a cervical incision but in selected cases a median sternotomy or a thoracotomy is indicated (1,2). We report a case of intrathoracic goiter of the anterior mediastinum in old age patient undergoing surgical excision by combined cervical and hybrid robot-assisted approach with da Vinci robot system: all steps of the thoracic procedure were performed using minimally invasive technique with final extension of a port-site incision to extract the specimen by an endobag.

A 74-year-old woman, with history of dyspnea and image of widened mediastinum on chest X-ray, was referred to our hospital. Cervical-thoracic computed tomography scan revealed an encapsulated, heterogeneous mass of the anterior mediastinum arising from the left lower pole of thyroid gland. The mass, measuring 40 mm × 40 mm × 80 mm, showed extension to the aortic arch (Figure 1). For surgical excision we performed a left thyroid lobectomy using a cervical approach. We decided to preserve the patient’s right thyroid lobe because substernal thyroidectomy, as compared with conventional cervical thyroidectomy, is associated with an increased likelihood of recurrent laryngeal nerve injury. A careful traction of the mass and a blunt digital dissection failed to exteriorize the lesion in the neck due to adhesions to the surrounding mediastinal tissue. The mediastinal portion of the mass was then resected via a minimally invasive surgical technique using the da Vinci robot system for all steps of the procedure (Figure 2A). With patient already positioned supine on the operating table, the left hemithorax was elevated by a roll placed from the patient’ s hip to the level of the tip of scapula. Using three-port access, with CO2 insufflation into the pleural cavity, the mediastinal part of the goiter was completely dissected. The mass was then delivered transcervically down into the anterior mediastinum and removed by an endobag with final extension of a port-site incision. A 20-Fr chest tube was left in place with closure of cervical and thoracic incisions (Figure 2B). The microscopic examination confirmed non-toxic multinodular goiter.

Anterior goiters represent the 80% to 90% of intrathoracic goiters and usually extend to the left as soon as they descend through the thoracic inlet (3). Common presenting symptoms are: dyspnea, dysphagia, hoarseness, cough and syncope episodes (4). The chest X-ray usually shows the classic image of widened mediastinum with tracheal deviation but it’ s non specific . Computed tomography scan represents the best imaging modality with a sensitivity of 100% (5). Fine-needle aspiration cytology isn’t advisable for intrathoracic goiters because they may conceal malignant cells that are likely to be missed (6). The treatment of choice for the intrathoracic goiters is the surgical resection because there is no good response to medical therapy in reducing their size (7) and because other treatments aren’t able to improve symptoms due to mass effect of the goiter (8). The antero mediastinal intrathoracic goiters are usually resected through a cervical incision . In some cases, such as extension to aortic arch, presence of a retrosternal goiter with >70% of the mass extending in the mediastinum, sternotomy or sternal split are required (9,10). In our case we performed a surgical excision by combined cervical and hybrid robot-assisted approach using the da Vinci robot system to mobilize and dissect the antero mediastinal portion of the goiter that extended to the aortic arch with adhesions to the surrounding mediastinal tissue. Despite the fact that post operative morbidity is more common in patients undergoing retrosternal goiter resection than those undergoing thyroidectomy for cervical thyroid disease (11), in our case the patient had an uneventful post operative stay without a significant post operative morbidity such as dysphonia or deglutition problems and was discharged on the fifth post operative day. Hybrid robot-assisted surgical technique, for excision of the retrosternal goiter with antero mediastinal extension, in combination with cervical approach turned out to be safe and effective. The robotic approach allows lower intraoperative blood loss and lower perioperative complications than transsternal approach (12). Compared with sternotomy, it also presents other advantages: shorter tube days and faster return to routine activities (13). The robotic approach also provides more advantages than the conventional thoracoscopy: more precision dissection around vascular and nervous structure, better vision of the operative field with less risk of incomplete resection and 3-dimensional high vision (14,15) These characteristics allow a more accurate surgical resection than conventional thoracoscopy that is challenged by the narrow anatomical structure of the antero-superior mediastinum due to limited movement of instruments (16). To our knowledge this is the first case reported in literature of antero mediastinal thyroid goiter undergoing surgical excision by combined cervical and hybrid robot-assisted approach in which thoracic procedure, performed completely under endoscopic guidance, is then followed by final extension of a port-site incision to extract the specimen (Figure 3). 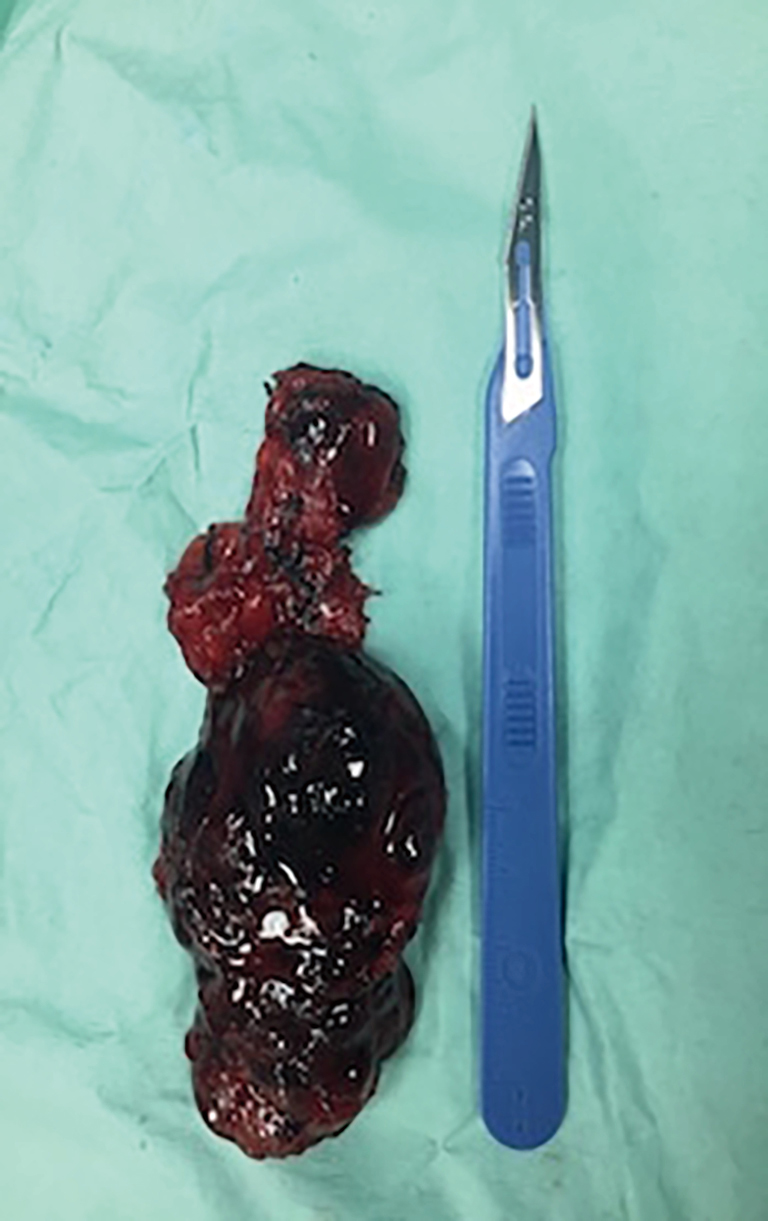