Targeted temperature management for non-shockable cardiac arrests: the debate must go on

Out-of-hospital cardiac arrest (OHCA) is a major public health issue worldwide, with a current increasing incidence of initial non-shockable rhythms that are associated with worse neurological and global outcome as compared with shockable rhythms (1,2). However, last available registries reported improvements in related short and long term survival rates in non-shockable cardiac arrest (CA) patients (3). The benefit of targeted temperature management (TTM) between 32 and 36 °C for at least 24 hours on neurological recovery and survival is established in OHCA from initial shockable rhythms (4,5). Based on this available evidence and consensus of expert opinions, international guidelines suggest the use of TTM in post-CA care for comatose CA patients after initial non-shockable rhythm.

However, the correct selection of patients that could benefit from TTM as well as the optimal TTM’s scheme associated with the best outcome (precise target temperature, induction, duration, and rewarming) remains unknown or debatable. More critically, as fever is frequently associated with impaired outcomes in the post-CA period, it remains unclear whether therapeutic effects of TTM are due to hypothermia or to the prevention of fever by itself (6). Indeed, a large randomized controlled trial (RCT) comparing TTM at 33 versus 36 °C in a population including both shockable (80%) and non-shockable OHCA (20%) failed to prove benefit of the lower target temperature (7). Moreover, most available RCTs assessed the benefits of TTM in the setting of highly selected OHCA patients, excluding a significant proportion of all CA patients, especially those from non-shockable rhythms (7,8). In parallel with discordant observational studies and meta-analyses, no randomized, controlled, and sufficiently powered trial currently confirms the generalization of TTM in the non-shockable OHCA population (9).

These arguments mostly explain the discrepancies observed between clinical practice and the intensity of the debate that presently focuses on two major issues: (I) extension of TTM to non-shockable patients (see Table 1) and (II) evaluation of the optimal TTM scheme. 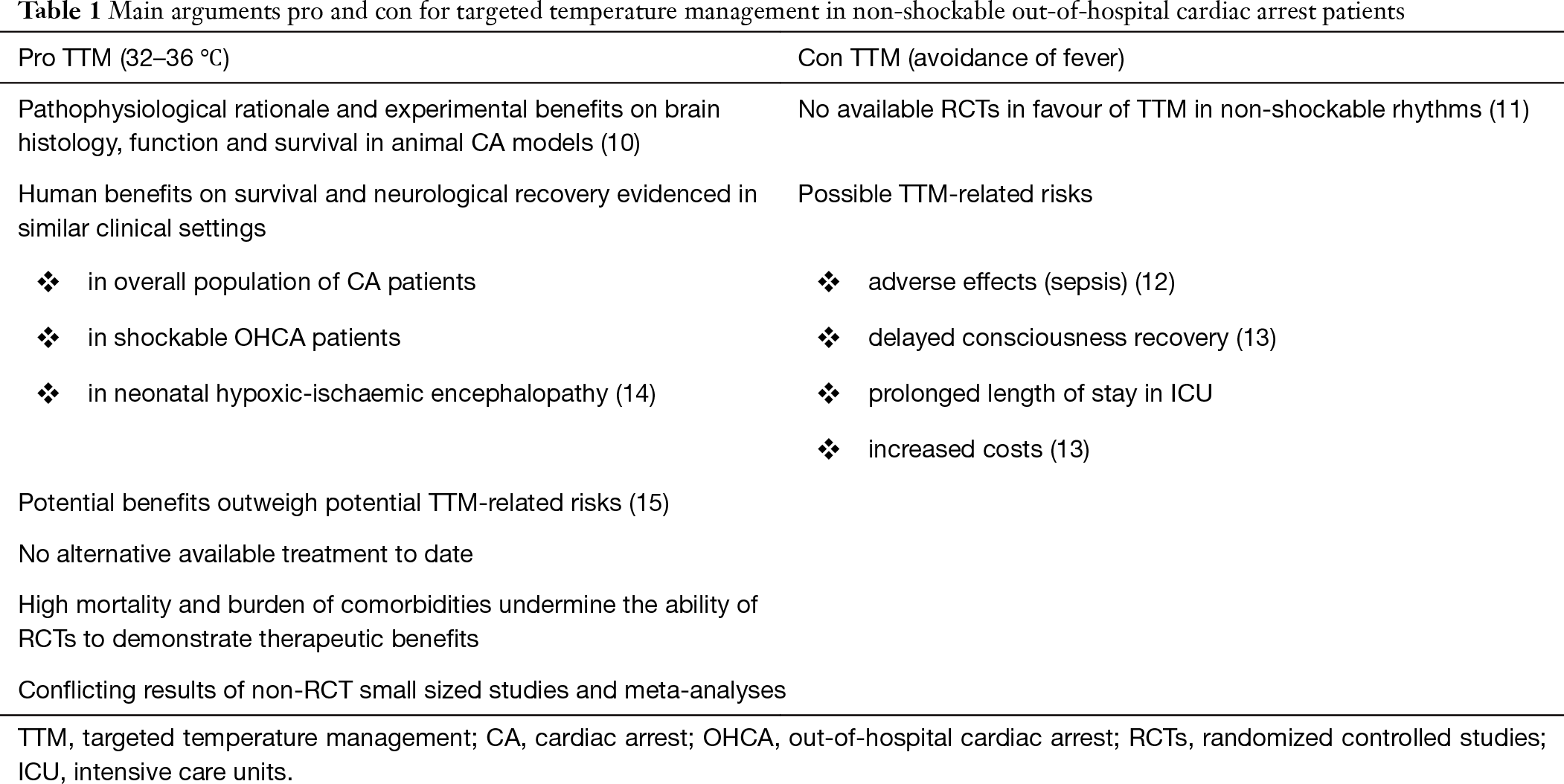 The work by Sung et al. add some elements in favor of TTM in the setting of non-shockable OHCA and represents the largest series reported to date (16). The authors provide the results of a retrospective analysis from a large American registry. This study included 1,432 non-shockable OHCA patients of whom 42% were treated by TTM initiated at the discretion of the treating physician. After multivariable logistic regression and a propensity score analysis, survival with good neurological outcome (cerebral performance category: CPC score of 1 or 2) was 14% in patients receiving TTM versus 5% without TTM, with an adjusted OR =2.9 (95% CI: 1.9–4.4) in favor of TTM. The undeniable strength of this work is the size and power of the cohort, the use of a prospective registry and the quality of adjustment in analyses. However, the level of evidence of this study remains that of a retrospective analysis with several shortcomings and questions, some of which were discussed by the authors:

Whether or not TTM should be proposed to all or a subset of non-shockable CA patients remains a challenge. Notably, the present study contrasts with those reported by Mader et al. and Chan et al. (5,17). In the latter study, a large national prospective registry involving 26,183 patients surviving after in-hospital CA, 80% of which were non-shockable and 6% treated with hypothermia, opposite results with potential harmful effects of hypothermia were highlighted (5). Several factors may explain why current evidence of the benefits of TTM is scant, underpowered and conflicting regarding non-shockable CA. In contrast to shockable patients, this population is much more heterogeneous, including various, severe and intermixed extra-cardiac etiologies of CA and brain injury (mainly sepsis, shock, acute respiratory distress and drug poisoning) (3). Thus, potential benefits and harmful side effects from TTM may differ across subgroups (12). Particularly, septic patients might best benefit from sepsis-related therapy, which may be impaired by TTM. Indeed, fever is a key component of the innate immune response. Outside the CA field, whereas elevated temperatures should probably be avoided in non-infectious diseases (i.e., mainly inflammatory processes), some studies suggest that a moderate degree of hyperthermia could be well tolerated in ICU septic patients (18). Additionally, the overall prognosis of non-shockable CA is worse than shockable CA, as non-shockable CA rhythm may result from either severe non-cardiac associated etiology and comorbidity burden or delayed diagnosis and care of an initial shockable CA. Due to a more severe prognosis and heterogeneity of non-shockable CA, the size of RCTs focusing on this population should be large enough to allow identification of a small but significant benefit in favor of TTM.

The correct selection of patients seems to remain a key point. This selection should consider not only the presenting rhythm, but also associated comorbidities, etiology of CA, and duration of the cardiopulmonary resuscitation. Actually, target subgroups in which TTM would be the most useful (significant but reversible brain injury) or useless (overwhelmed brain damages due to prolonged cardiopulmonary resuscitation or “no flow”) seem intermixed: TTM should be proposed not too early when unnecessary, but not too late when effective (19). As well, an enhanced scheme of TTM could provide further improvements in all or selected CA patients. Notably, the benefits of TTM in most neonatal trials, which involve a much greater proportion of non-shockable rhythm in comparison with adults, were assessed using a different TTM scheme. This includes a TTM induction performed within the first 6 h in a population (according to the size of neonates) quite “easy to cool” quickly at the targeted temperature (33–33.5 °C), and with a longer TTM duration (72 h) than typically used in adults (20).

Finally, faced with the available literature, the study from Sung and co-workers underlines the crucial need for further powerful RCTs focused on well-characterized non-shockable adult CA patients. This will help to identify a potential and specific benefit of TTM in this setting, to highlight various sub-groups of patients that could benefit from TTM, or to evaluate a modified scheme of TTM which would be more beneficial. In this regard, two RCTs currently recruiting patients should further provide new insights: HYPERION (NCT01994772) and TTM-2 (NCT02908308). Meanwhile, it seems appropriate to consider TTM on a case-by-case basis in non-shockable OHCA patients.

Conflicts of Interest: Nicolas Deye reports past lecture and travel fees from Bard and Zoll. He is the primary investigator/coordinator of the ICEREA (NCT00392639) and THE COOL studies (NCT02327871). The other authors have no conflicts of interest to declare.