The incidence of identifying very small lung tumors has recently increased because of advances in computed tomography (CT) (1). In particular, Japan has the most number of CT studies per million people, based on the Organization for Economic Co-operation and Development findings. In Japan, CT is often used for cancer screening. It is challenging to diagnose and resect small lung tumors that are not yet palpable. It is thus important to determine the position of lung tumors both preoperatively and intraoperatively. Conventional mapping methods such as CT-guided hook wire localization may have limited access and severe complications (e.g., air embolism) that can be fatal (2-5). In view of the aforementioned limitations and complications, we performed virtual-assisted lung mapping (VAL-MAP) from May 2014, which was first described in a multi-institutional lung mapping (MIL-MAP) study by Sato et al. (6).

The purpose of the current study was to retrospectively review the usefulness of VAL-MAP in wedge resection of lung tumors at our institution by comparing with the wedge resections in 2013 without the use of VAL-MAP. 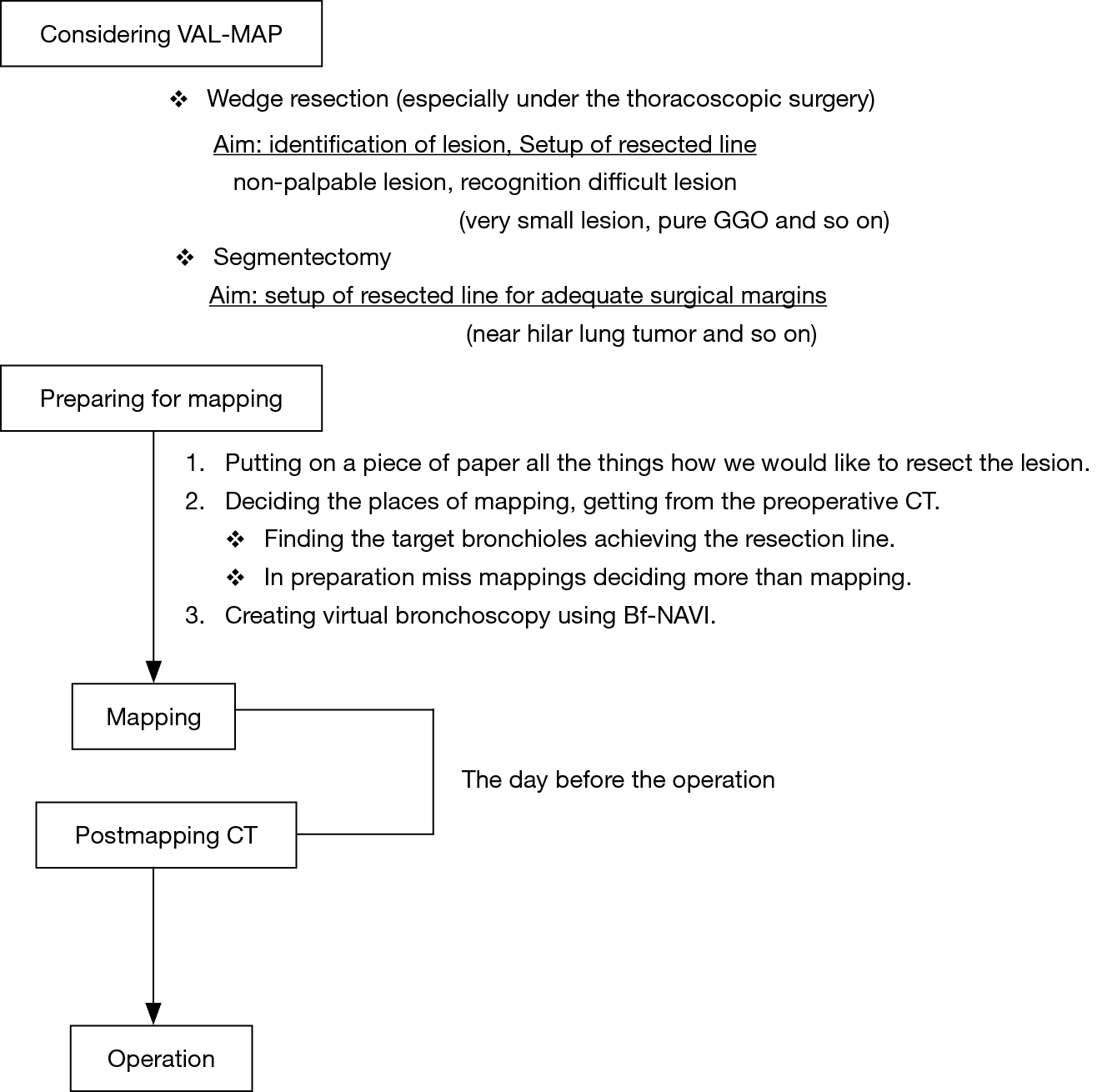 There have been many papers reporting various “marking” methods for small lung tumors (7-10). However, VAL-MAP is unique as it is a “mapping” method for tumors. VAL-MAP creates the address of the tumors as if a blank map were marked up. VAL-MAP does not require the mapping points to be near the tumor, and can also plan the resection margins. This procedure is described below through an example case (Figure 2).

Figure 2 This computed tomography (CT) is an example case showing that the mixed type ground-glass opacity (GGO) appears approximately the same size (the longest diameter was 1.5 mm, the component of GGO was about 60%) as in the previous 4 years. The GGO is circled. We predicted that it was difficult to find the lesion without palpation under thoracoscopic surgery. We thus planned a wedge resection with VAL-MAP. VAL-MAP, virtual-assisted lung mapping.

We designed a method to plan the mapping of any site and resection margins of tumor lesions. We exported the mapping plan from the preoperative CT image onto paper as a reference (Figure 3A). It is important to map several points because we specified the address of the tumor and provide against the miss mapping. Next, we created virtual bronchoscopy images to facilitate scheduled mapping using Bf-NAVI. (Cybernet Systems, Tokyo, Japan) (Figure 3B). This software was selected based on the bronchoscopist’s or surgeon’s preference.

The day before surgery, we performed each mapping using 1 mL of indigo carmine (Daiichi-Sankyo, Inc., Tokyo, Japan) via standard flexible bronchoscopy under X-ray fluoroscopy. We used a metal tip catheter (PW-6C-1; Olympus, Tokyo, Japan) when injecting indigo carmine onto the lung surface, based on the preoperative blueprint. The patient was sedated during the procedure.

All surgical procedures were performed under thoracoscopy. In addition, we recorded all operations via thoracoscopy. We judged the quality of the mapping points by the grading system proposed by Sato et al. (6) (Figure 4).

Figure 3 The process of virtual-assisted lung mapping (VAL-MAP). (A) We established a road map of VAL-MAP on paper. This image shows the resected margins for the GGO; (B) we show an example of the virtual bronchoscopy images for the mappings; (C) the PostMapping CT image. The circles indicate the mapping points; (D) the PostMapping CT image reconstructed into a three-dimensional image. The arrows indicate the planned line of resection. GGO, ground-glass opacity. 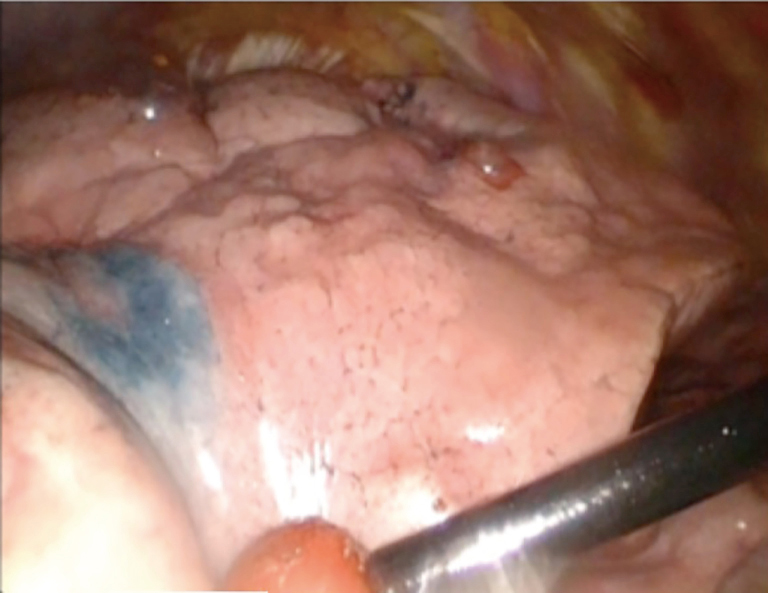 Figure 4 The operative findings of the example case. This image shows the #2 mapping of Figure 3C.

Categorical variables were evaluated using the chi-square test. Continuous variables were compared between the two groups using the t-test. Differences were statistically significant for values of P<0.05. The data were analyzed using GraphPad PRISM software.

The characteristics of patients, lesions, and conducted VAL-MAP procedures are shown in Table 1. Seventy-eight patients (35 men, 43 women) received VAL-MAP from May 2014 to April 2017. The median age was 69 years (range, 34–83 years). Eight patients had not been diagnosed by preoperative bronchoscopy. Seventy patients had not received preoperative bronchoscopy because of the rejection of this examination or our judgment that the tumors were difficult to diagnose by the bronchoscopy due to the infinitesimal tumors. One hundred and twenty lung tumors were targeted by VAL-MAP. In total, 268 mapping points were performed (average, 3.4/target; range, 1–4/target), and the success rate of mapping was 90.7%. Mapping failure involved 17 mapping points in which dye was sprayed onto the central aspect of the lung preventing visual confirmation of these mapping points intraoperatively. Five mapping points were not visible because of anthracosis, and one mapping point was unclear for unknown reasons. The median bronchoscopy time was 20.0 min (9–90 min) (Figure 5). With regard to complications, four patients experienced a pneumothorax that did not require drainage, and one patient had alveolar hemorrhage. Three patients were unable to complete bronchoscopy because of a strong cough reflex. The median maximum diameter of the targeted tumors was 8.0 mm (range, 2.0–55.0 mm). The median distance of the targeted tumor from the lung surface was 5.5 mm (range, 0–43.0 mm). A characteristic of all tumors on the lung surface (i.e., the distance between the tumor and the lung surface was 0 mm) was extremely small pure GGO without pleural changes. On CT, the target lesions were solid or nodular in 38 tumors, mixed GGOs in 18 tumors, and pure GGOs in 56 tumors. All patients who underwent VAL-MAP had surgery 1 day later. Twenty-nine underwent only a single wedge resection of the lung, 11 patients underwent wedge resection at multiple lung locations, 15 patients had a segmentectomy of the lung, 2 patients underwent segmentectomy of two segments of the lung, 7 patients underwent lobectomy after wedge resection, 6 patients underwent both lobectomy and wedge resection, and 4 patients underwent both lobectomy and segmentectomy. We were able to resect all targeted lesions in patients who had undergone VAL-MAP. Pathological examination of the resected lesions revealed primary lung cancer in 68 resected lesions (adenocarcinoma: 65 tumors; squamous cell carcinoma: 3 tumors), atypical adenomatous hyperplasia (AAH) in 12 resected lesions, metastatic pulmonary tumor in 12 resected lesions, and benign lung tumors in 20 resected lesions. 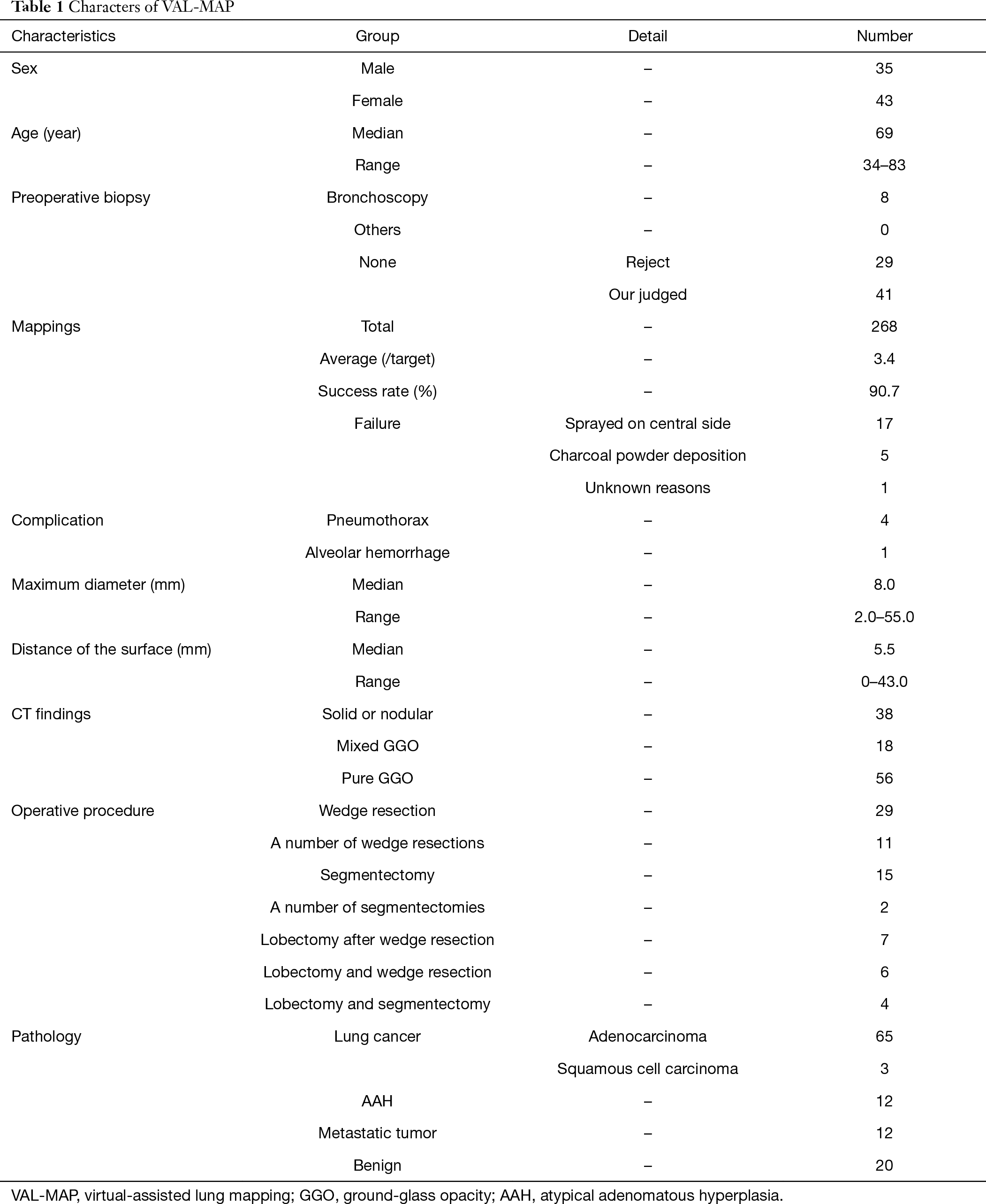 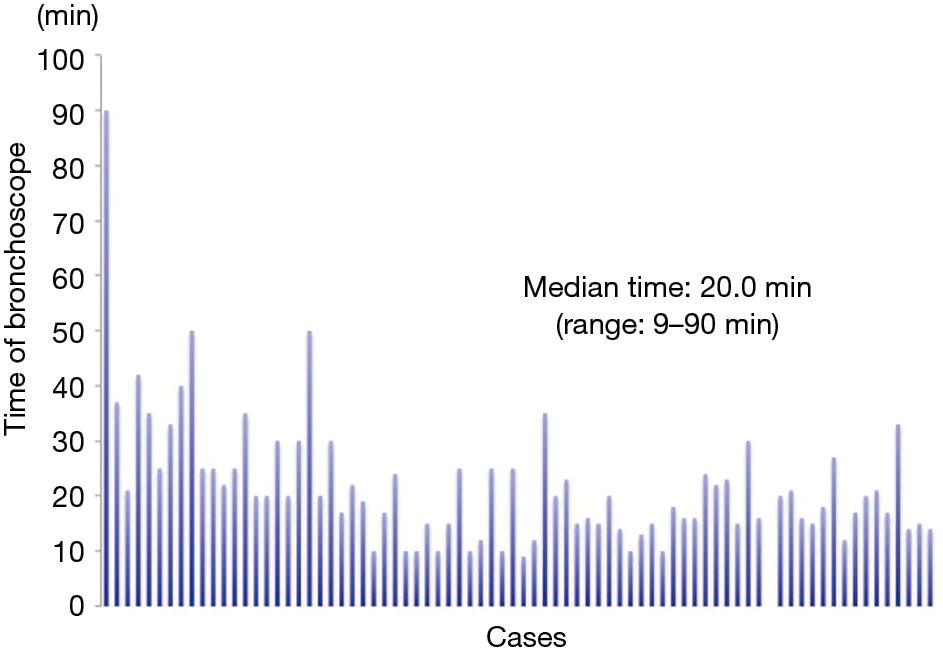 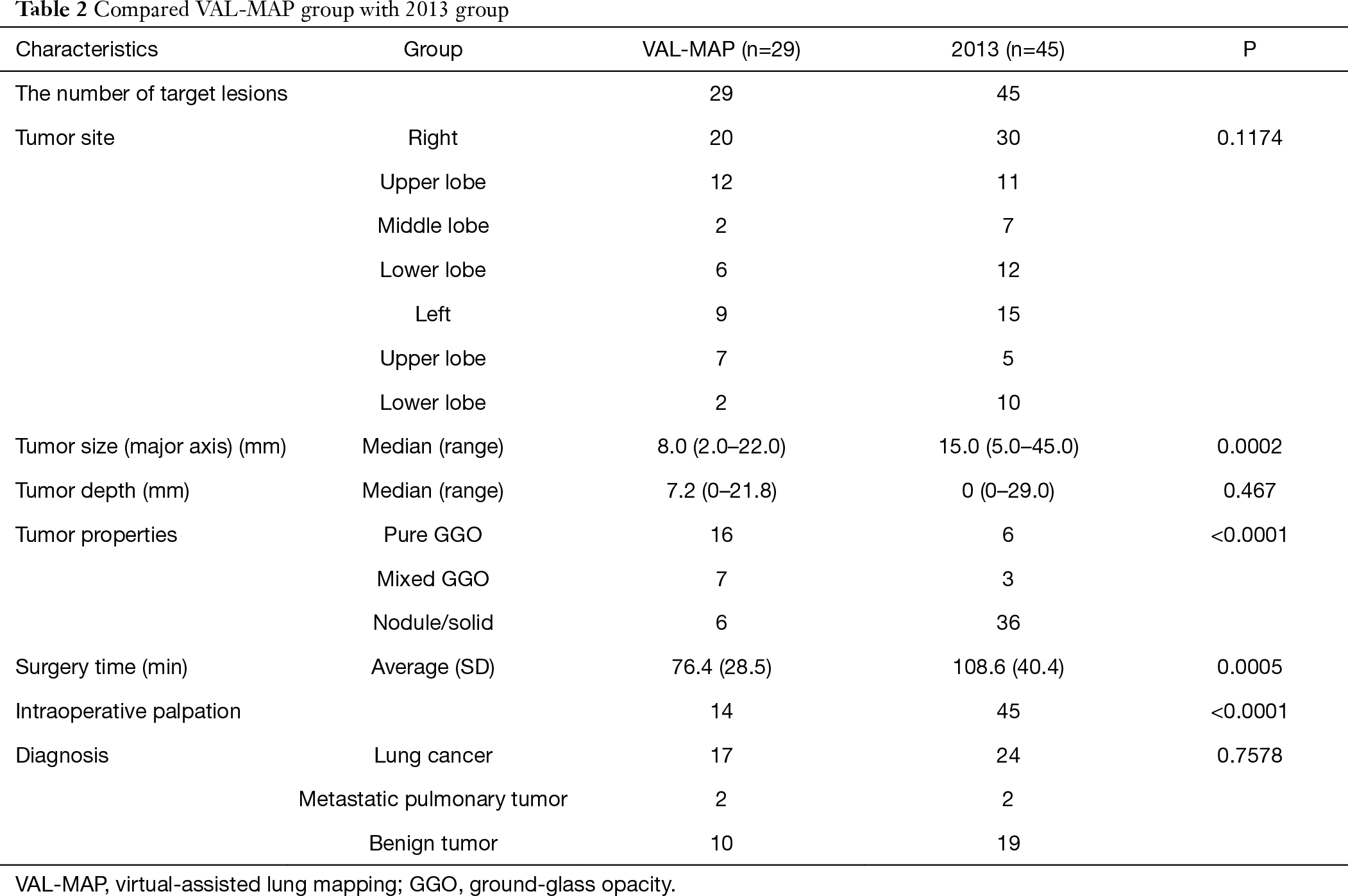 In this study, we have demonstrated the efficacy of VAL-MAP where VAL-MAP significantly reduced the surgical duration of wedge resections. However, the VAL-MAP group had more pure GGOs and smaller tumors compared to the 2013 group. This reduction in surgery duration is expected because the time taken to search for tumors is shortened owing to accurate mapping. In addition, we conclude that our surgery time was reduced because we could resect the mall lesions without palpation and we could easily imagine the resection line. A reduction in surgery duration is of great benefit to patients because of reduced surgical stress and anesthesia duration. No report thus far has compared the findings of surgery after the mapping procedure as we have done in this study.

In wedge resection of the lung after VAL-MAP, surgery could be performed on smaller lung lesions compared to the 2013 group. In addition, our report showed that VAL-MAP allowed for the resection of smaller tumors compared to other reported methods (7-11). This allowed for the eradication of malignant tumors by facilitating early intervention. As such, a sub-lobar resection, such as wedge resection or segmentectomy, is “minimally invasive” and may be a curative treatment for very small nodules. The vast majority of peripheral small lung tumors with a maximum tumor diameter of 20 mm or less are lung cancers (12) and GGO dominant tumors or a maximum tumor diameter of 20 mm or less in CT findings were less invasive and with good prognosis (13). Moreover, some reports claim that sub-lobar resection of such lung cancers offer a good chance of curative treatment (14,15).

Once a very small lung tumor has been detected on chest CT, a follow-up assessment is typically scheduled. Surgical treatment is considered if the tumor grows during the elapsed time and if malignant disease is suspected. If a small tumor does not change in size, long-term follow up of the patient is required. Moreover, during the follow-up period, patients worry whether the lung nodule is malignant. VAL-MAP allows the resection of small lung tumors. Therefore, patients can receive a diagnosis and undergo surgical treatment earlier. In addition, this procedure did not have serious complications, and we found no need for additional treatment. No serious complications were reported in earlier studies (6). However, some papers have reported complications including pneumothorax and hemothorax requiring invasive treatment (7-11).

On the other hand, if the pathological diagnosis was benign, the surgery would have resulted in surgical stress for the patients. The resection of the nodule using VAL-MAP relieves the patient of uncertainty (e.g., “if this is a malignancy”) and removes the burden of a long follow up. In addition, this “minimally invasive” surgery for very small nodules may be curative if it is a malignancy.

However, VAL-MAP has some problems. First, this procedure requires multiple steps and experience. We supposed that it is possible to overcome this weakness with experience. For example, as shown in Figure 5, the bronchoscopy duration can be reduced. After 24 VAL-MAP cases, subsequent cases required less than 30 minutes of the bronchoscopy time. Second, it is not possible to confirm the mapping points preoperatively. As such several mapping points are planned so as not to fail the mapping points.

This report is the first to demonstrate that VAL-MAP, which is a preoperative procedure for the resection of very small lung tumors, can shorten surgery duration in the wedge resection of lung tumors. No previous report on preoperative procedures for small lung tumors has proven whether the procedures lead to a good outcome such as shortening the surgery duration. Moreover, VAL-MAP is safer than other methods because it has no complications that require additional treatment. Furthermore, VAL-MAP is an easy method to perform and bronchoscopy duration was reduced in each succeeding patient. However, this procedure should be further optimized and integrated with other surgical procedures.

Ethical Statement: This study was approved by the ethics committee of the Occupational and Environmental Health University Hospital (H26-003). Written informed consent was obtained from the patient for publication of this manuscript and any accompanying images.