Hellman et al. proposed a clinically significant status known as oligometastasis, which was initially described as a restricted locoregional status (5). Oligometastasis is now-defined as a small number of isolated distant metastases (generally less than 5 sites) (6). An incidence rate of 4.0% has been reported for brain oligometastasis (BOM) as the sole distant lesion in patients with NSCLC (any N grade) receiving surgical treatment (7). A few studies have reported patients with TNM stage N0 to N1 BOM (N0–1 BOM) who did not receive surgical treatment.

The standard treatment for stage IV NSCLC is chemotherapy. A few studies have reported that patients with BOM who receive surgical treatments for both their primary and metastatic sites have a better prognosis (8-15). However, a comparison of the survival outcomes for NSCLC patients with BOM undergoing either surgery or chemotherapy for the primary site has not yet been performed.

The purpose of this retrospective study was to investigate the frequency and treatment outcome of patients with N0–1 BOM who received chemotherapy as a treatment for the primary site and definitive treatment for brain metastases.

Patients with stage IV lung cancer who received chemotherapy at the National Cancer Center Hospital in Japan between 2000 and 2010 were included in this analysis. We selected NSCLC patients with brain involvement (less than 5 metastases) as the sole distant lesion at the time of diagnosis (synchronous metastases) (6,16). Among those patients, N0–1 stage NSCLC cases who were a candidate for resection surgery of the primary lesion if they did not have brain metastases were included in this study. All the patients were evaluated using computed tomography (CT) examinations of the chest and abdomen, magnetic resonance imaging (MRI) and/or CT of the brain, and a bone scan and/or PET-CT if available as a standard staging work-up to investigate distant metastases before receiving chemotherapy. Patients were staged using the 7th edition of the Union for International Cancer Control TNM classification for lung cancer. Patient age, sex, performance status (PS), histology, information on driver oncogenes [EGFR, and anaplastic lymphoma kinase (ALK) rearrangement], TNM staging, number of brain metastases, maximum size of brain metastases, initial systemic treatment (chemotherapy or molecular targeted therapy), initial treatment for the brain metastases (surgery, whole brain irradiation, stereotactic radiotherapy), pattern of recurrence after initial treatment, and second-line systemic therapy regimens were collected. This study was approved by the institutional review board of the National Cancer Center Hospital [2014-160].

A total of 1,306 patients with stage IV NSCLC who were treated at our hospital were identified. The cohort diagram is shown in Figure 1. We excluded 370 patients: 123 patients who did not receive any treatment for the primary site, and 247 patients who did not have histological confirmation of NSCLC. We identified 19 patients (2.0%) with brain involvement (less than 5 metastases) as the sole distant lesion and N0 or N1 disease as N0–1 BOM patients and 917 stage IV NSCLC patients who received chemotherapy with or without radiation for treatment of the primary site as N2–3 BOM + non-BOM (no brain metastasis or more than 5 brain metastases) patients. The median duration of the follow-up period for the 19 N0–1 BOM patients was 16.0 months (range, 3.0 to 88.7 months). Four of the 19 patients were lost to follow-up but were not reported to have died, and one patient was still alive at the time of the study cut off (October 2016). The patient characteristics are summarized in Table 1. Among the N0–1 BOM patients, the histological findings showed 17 adenocarcinomas (89%), 1 squamous cell carcinoma (5%), and 1 large cell carcinoma (5%). One patient (5%) had an activated mutation (L858R) of the epidermal growth factor receptor (EGFR) gene, 3 patients (16%) had wild-type EGFR, and 15 patients (79%) had an unknown EGFR status. None of the patients had an ALK oncogene rearrangement, 1 patient (5%) had a negative result, and 18 patients (95%) were not examined. The brain metastases consisted of 1 site in 10 patients (53%), 2 sites in 7 patients (37%), 3 sites in 1 patient (5%), and 4 sites in 1 patient (5%). In 7 cases (37%), the maximum diameters of the brain metastases were more than 30 mm. Three patients (16%) received brain surgery, 5 patients (26%) received whole brain radiation therapy (WBRT), 5 patients (26%) received stereotactic radio surgery (SRS), and 6 patients (32%) received only systemic chemotherapy for the initial management of the brain metastases. The primary systemic therapies were cytotoxic chemotherapy in 17 patients (90%) and EGFR tyrosine kinase inhibitor (EGFR-TKI) in 2 patients (11%). All the first-line systemic cytotoxic chemotherapy regimens were platinum-based regimens. 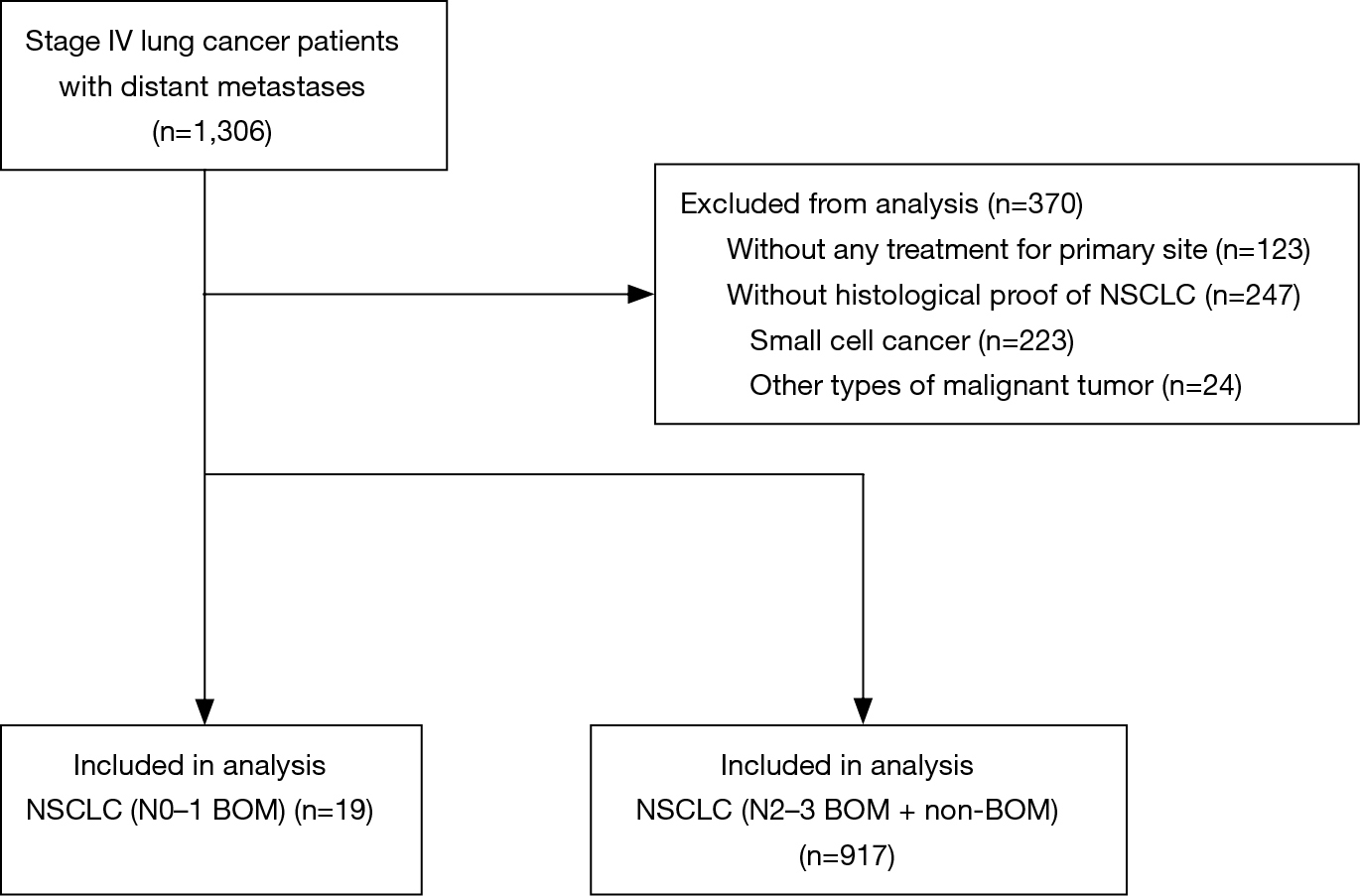 Efficacy of chemotherapy and survival benefit 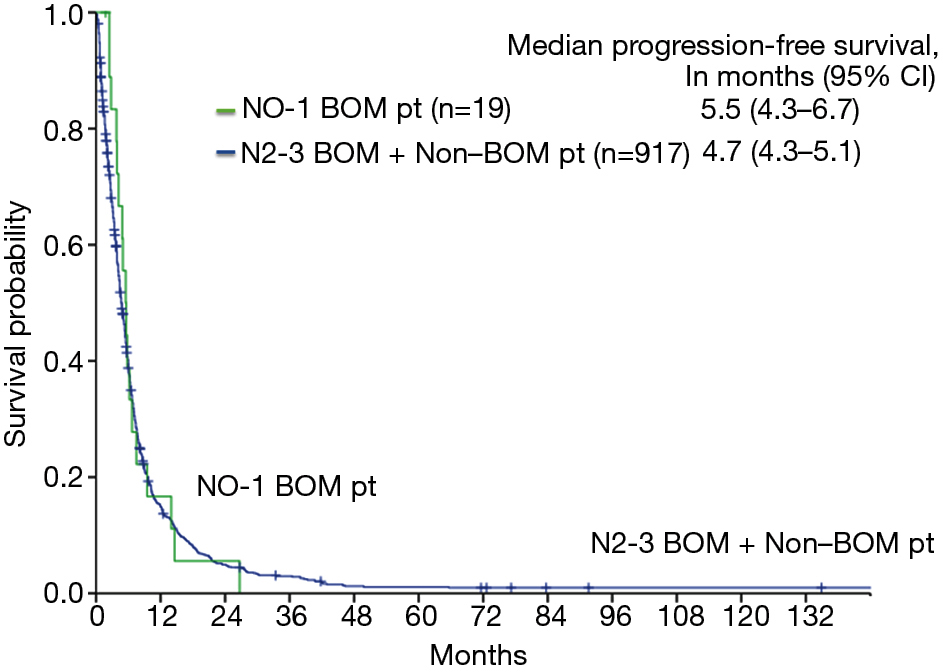 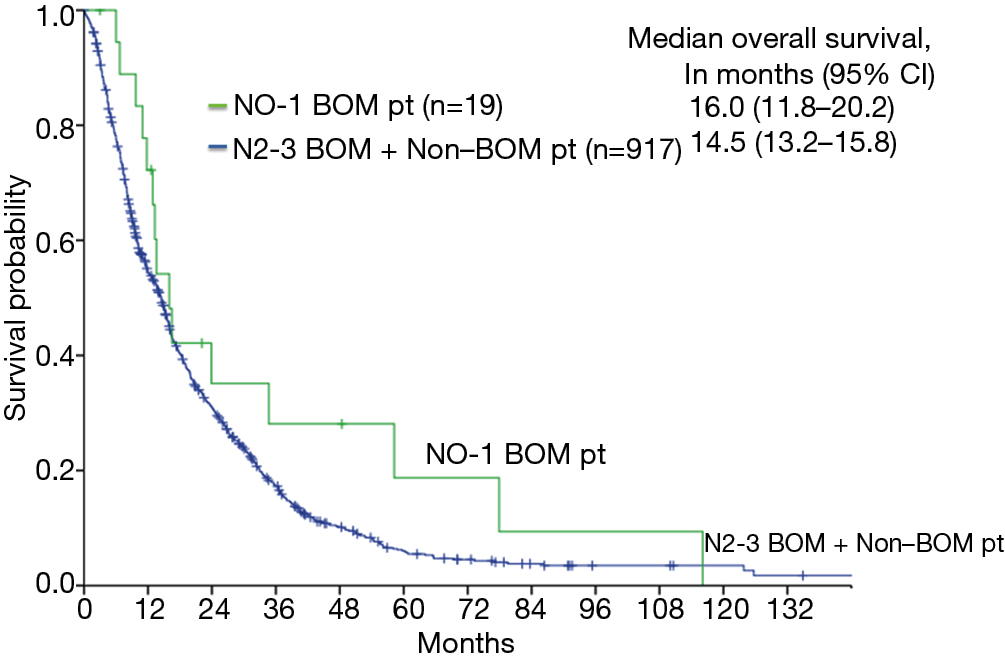 The frequency of N0–1 BOM was 2.0% among patients with stage IV NSCLC. The 3- and 5-year survival rates in patients with N0–1 BOM were 28% and 19%, respectively. This is the first report describing the treatment outcome of chemotherapy without surgical resection and radiotherapy for the primary site in NSCLC patients with brain involvement as a single-organ metastasis.

Advanced NSCLC patients usually have a poor prognosis and rarely survive for as long as 5 years. The median survival period for advanced NSCLC patients with brain metastases was 7–9 months according to previous studies (4,18-20). Radiation therapy or surgical treatment for brain metastases improved the survival periods of these patients (21,22). The results of several randomized controlled trials have suggested three standard treatments for NSCLC patients with brain metastases: resection with sequential stereotactic radiation or whole brain irradiation, stereotactic radiation therapy alone, and stereotactic radiation therapy with sequential whole brain irradiation (18-20). Several reports have proposed that surgical treatment for the primary site improves the survival outcome, compared with chemotherapy +/− radiotherapy, but few reports have described the outcomes of cases treated with only chemotherapy +/− radiotherapy for the primary site. The leading cause of death among patients who have received local treatments for brain metastasis is the progression of primary and other metastatic lesions (23). There have been numerous published reports describing the combined resection of a primary lung site and a solitary brain metastasis (9,24,25). Surgical resection for both the brain and primary sites was suggested to prolong survival among NSCLC patients with a sole brain metastasis as early as 1976 (6,26). A recurrence-free rate of 6.3–14.0% at 4 years, a survival rate of 6.6–21.0% at 5 years, and a median survival time of 8.5–24.0 months were observed in trials including patients who underwent the resection of both the primary lesion and brain metastases (8,10,12,27). In trials using chemoradiotherapy for the treatment of the primary lesion and radiotherapy +/− resection for the brain metastases, the 2-year recurrence-free rate, the 5-year overall survival (OS) rate, and the median survival time were 53.0%, 7.6% and 13.1–31.8%, respectively (24,28,29). In the present study, the 5-year survival rate was 19% and the median survival was 16.0 months among the N0–1 BOM patients treated with chemotherapy for the primary site without surgical resection. This result suggests that the prognosis of patients without surgery was not worse than that of patients who received surgery for the primary site.

Patients with N0–1 BOM have a better prognosis, although the development of chemotherapy in recent years has contributed to an improvement in the survival outcome. The median OS of stage IV NSCLC patients with N0–1 BOM was 16 months, and this outcome was better than the OS of 6–9 months reported in previous trials among NSCLC patients who had brain involvement with or without other organ metastasis. According to the results of phase 3 trials among patients with advanced-stage unresectable NSCLC who received platinum-containing regimens (CDDP + PEM/CDDP + GEM/CBDCA + PTX), the median survival period was 10–18 months after initial chemotherapy (30-32). Although the survival time in our study was estimated after the treatment for the primary site or brain metastasis had begun, these results show that patients with N0–1 BOM have a relatively favorable prognosis (4,18-20). The survival outcome is expected to be further improved because of recent improvements in chemotherapies. Since one long-term survivor in this study received gefitinib for more than 2 years, the development of molecular target drugs is likely to improve the outcomes of NSCLC patients with N0–1 BOM.

This report describes a relatively small retrospective study. Therefore, a selection bias might exist. Most of the patients in this study had been treated before the development of EGFR-TKIs, and the presence of EGFR mutations was not examined in these patients. In the present study, however, the impact of this circumstance on survival might be relatively small, since the number of patients treated with EGFR-TKIs after testing for EGFR mutations was also small. In oligometastatic brain metastases arm, three patients lost to follow up. The impact of these patients of survival analysis was small because all of them were considered that they were not capable of receiving additional chemotherapy, including EGFR-TKIs, for poor general condition. To further consider the development of molecular targeted drugs and immune-based therapy, further evaluation of driver mutations and the expression of programmed cell death-ligand 1 (PD-L1) is needed to select patients for future clinical trials. Addition to that, multi-institution study should be conducted, considering that it needs to find 19 patients for 10 years in single institution.

Ethical Statement: This study was approved by the institutional review board of the National Cancer Center Hospital [2014-160]. Written informed consent was obtained from the patient for publication of this manuscript and any accompanying images.