Atrial septal defect (ASD) is one of the most common types of congenital heart disease (CHD), constituting 8–10% of CHD cases in children. ASD is sometimes associated with complex CHDs or chromosomal abnormality. Although most ASDs occur sporadically, hereditary modes of inheritance have been reported. The risk of CHD in offspring of a woman with sporadic ASD has been reported to be 8–10%(1). Hereditary ASD is sometimes complicated with bradyarrhythmias such as atrioventricular block (AVB) or sick sinus syndrome (SSS); patients with surgically-repaired ASD sometimes present tachyarrhythmias such as incisional atrial tachycardia caused by operation. We herein describe the inherited ASDs associated with arrhythmias: Holt-Oram syndrome (HOS) and ASD with atrioventricular (AV) disturbance. Atrial tachycardia after ASD operational repair will be discussed in a later.

The atrial septum is formed by three distinct structures: (I) the AV septal cushion; (II) the primary atrial septum; and (III) the dorsal mesenchymal protrusion associated with the second heart field (SHF) (2,3). Transcription factors important during the atrial septation include GATA4, NKzX2-5, and TBX5. TBX5 interacts with NKX2-5 and GATA4 and positively regulates transcription within the developing heart. TBX5 regulates SHF GGAS1 and OSR1, which are required in the posterior SHF for atrial septation (2,4,5). 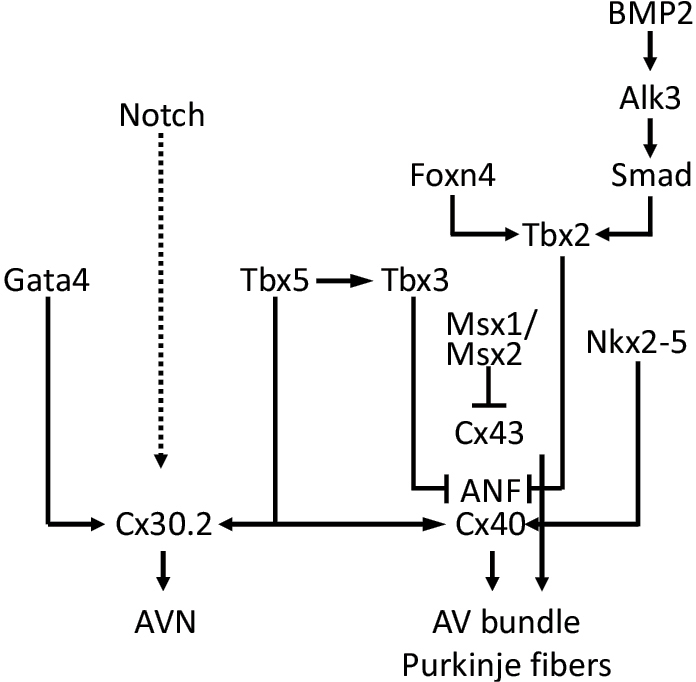 Figure 1 Molecular pathways regulating the development of the fast-conducting bundle of His and its tributaries. TBX2 and TBX3 suppress the expression of chamber myocardium genes: ANF, GJA5 (Cx40), and GJA1 (Cx43), which differentiate toward rapid conduction, along with muscle-segment homeobox transcription factor MSX1 and MSX2. While TBX5 and NKX2-5 activate the expression of ANF and Cx40. Together with TBX5, GATA4 activates Cx30.2 expression, which is detected in AVN and retains the slow conduction [cited from reference (6)]. AVN, atrioventricular node.

Two transcriptional repressors, TBX2 and TBX3, are crucial in suppressing the further differentiation of the AV canal myocardium (7,8). The combined action of widely expressed transcription factors: NKX2-5, TBX5, and ID2 (inhibitor of DNA binding), the latter having a more limited domain of expression, is now known to be crucial for the development of the AV conduction system (9). TBX3 represses the chamber-specific genes ANF, GJA5, and GJA1 along with TBX2, MSX1, and MSX2. While TBX5 and NKX2-5 activate the expression of ANF and GJA5, TBX5 also activate Cx30.2 expression together with GATA4 (6,10) (Figure 1).

This syndrome, characterized by thumb anomaly and ASD, was first described by Holt and Oram in 1960 (11). They reported a family in which members of four generations were affected by both CHD and skeletal anomalies, and their malformations appeared to be of similar type in all the affected members: ASD, often accompanied by bizarre arrhythmias, and the skeletal anomalies affected mainly the hands. Their electrocardiograms (Figure 2) showed sinus bradycardia, PR prolongation, and escape junctional beats. One family member had sudden cardiac death (SCD). The inheritance followed Mendelian dominant type. 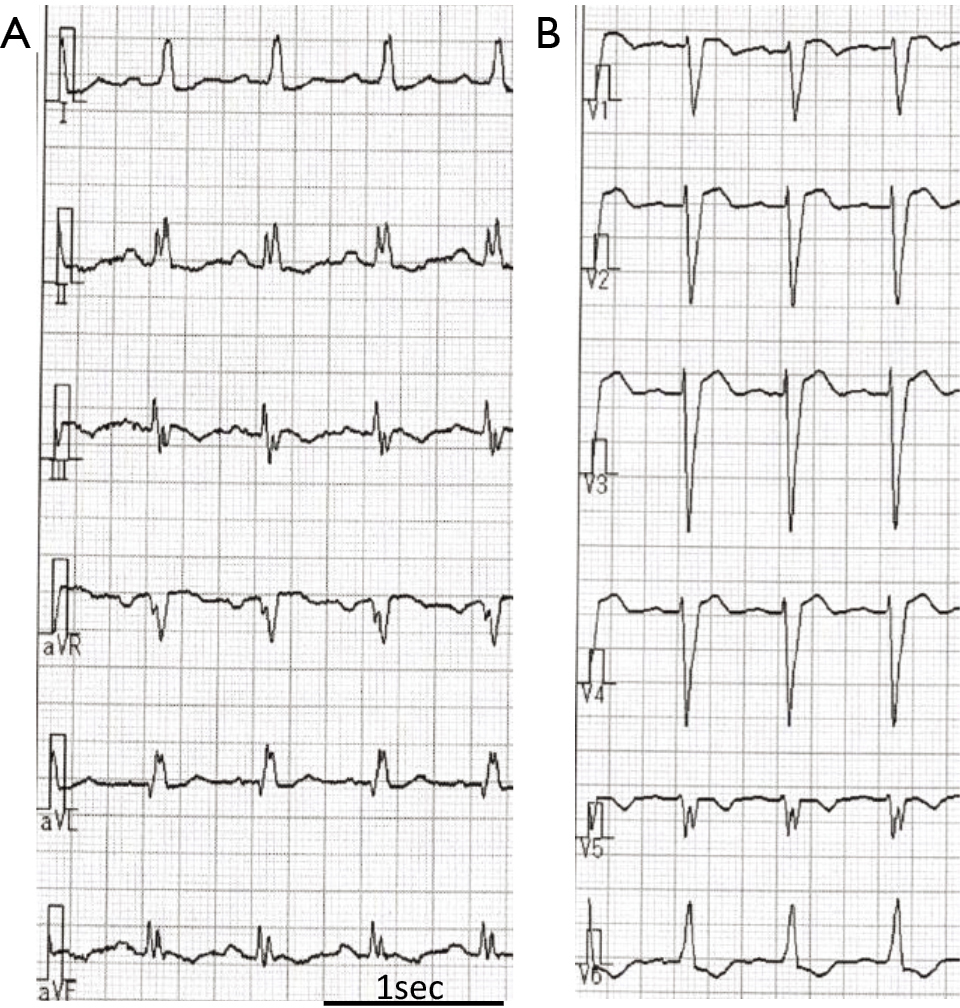 The combination (ASD + finger anomaly) is the most common type of “heart-hand” syndrome (upper limb and CHDs) and is estimated to occur in 1 of 100,000 live births (12). Linkage analysis performed on families demonstrating autosomal dominant inheritance identified a disease locus at 12q24 in 1994 (13). Subsequent investigations identified TBX5 mutations in patients with HOS at 1997 (14,15). TBX5 is a member of a family of transcription factor genes characterized by a highly conserved binding domain called T-box (16). It is located on 12q24.1 and consists of 10 exons.

Clinical features: a congenital heart malformation is present in 75% of clinically diagnosed patients with HOS (10). Although atrial and ventricular septal defects are most commonly seen, respectively occurring in 58% and 28% of patients, additional CHDs have also been reported, including AV septal defects, tetralogy of Fallot, truncus arteriosus, partial pulmonary venous drainage, ductus arteriosus, or hypoplastic left heart syndrome (17,18). Cardiac involvement was found in 95% of familial cases. Simple CHD was found in 66% of patients and more complex CHD in 17.5%. Some cases showed only ECG abnormalities without CHD (18).

Skeletal anomalies involve the preaxial radial ray and are fully penetrant. Subclinical changes may include only radiographic evidence of abnormal carpal bone, whereas others have obvious severe manifestations such as phocomelia (13,18). Upper-limb malformations include unequal arm length, fusion or anomalous development of the carpal and thenar bones, abnormal forearm pronation and supination, abnormal opposition of the thumb, and sloping shoulders and restriction of shoulder joint movement (11). Carpal abnormalities are more specific for the HOS than are changes in the thumb (21). The left side is reported to be more severely affected (22). Other skeletal anomalies were polydactyly, arachnodactyly, coxa vara, thoracic scoliosis, hemi-atrophy of the body, and hypoplastic mandible.

The correlation of the genotype with the severity of clinical features: TBX5 mutations are identified in 70% of patients with the clinical features of HOS (24,25). The genotype-phenotype correlation in HOS remains controversial. More than 90 mutations have been identified within the TBX5 gene, including missense, nonsense, frameshift mutations, splice mutations, duplication, and chromosomal rearrangements (14,15,26-31). Most mutations were predicted to encode a truncated protein and cause haploinsufficiency leading to more severe limb and cardiac phenotype. Of 90 these mutations, missense mutations (n>50) cause a large phenotype variation depending on their position within the DNA-binding domain. TBX5 dosage would be crucial for the healthy development of heart and upper limb (26).

A missense mutation (p.Pro85Thr) was found to result in a switch from cis-peptide conformation to the trans-conformation bond, affecting both folding and biological function and thereby leading to loss of function (31). Amino acid alteration near the amino-terminal end of the T-box, which should affect interactions with the major groove of the target DNA sequence, produces very significant cardiac malformations and minor skeletal abnormalities. In contrast, change in amino acids at the carboxyl end of the T-box, which should affect interactions between TBX5 and the minor groove of the DNA target sequence, produces severe limb abnormalities and less significant cardiac abnormalities (27). It has also been reported, however, that neither the type of mutation in TBX5 nor the location of a mutation in the T-box was predictive of the expression of malformations (32). Two gain-of-function mutations were associated with HOS (33,34).

Hereditary ASD with prolonged PR interval, AVB and juvenile SCD has been reported in association with NKX2-5 mutations (35-38). While the cardiac manifestations can be similar to those found in HOS, the disease associated with NKX2-5 mutation lacks extracardiac anomalies such as upper limb malformations.

Schott et al. first demonstrated NKX2-5 mutations in four families harboring AVB and CHD, including ASD or tetralogy of Fallot (39). Their 33 affected individuals all presented AV conduction delays, for which 14 received pacemaker implantation. SCD occurred in six asymptomatic individuals without pacemakers after surgical ASD repair. NKX2-5 mutations also have been identified in patients with dilated cardiomyopathy (40,41) or ventricular arrhythmias (42) and caused SCD (43). SCD occurred in 15% of the patients with hereditary ASD and AV conduction disturbance (44). The families with ASD and SCD have NKX2-5 mutations in 44% (44). The autopsy study revealed the fibrotic replacement of the AV bundle (45). Intra- and inter-familial phenotype variability of NKX2-5 mutations is noted, but so far, no correlation has been reported between the mutant alleles and the severity in phenotype (46). In cases of hereditary ASD or CHD, or ASD with AV conduction disturbances, the genetic testing of NKX2-5 would be useful for predicting ventricular arrhythmias or SCD. If they are mutation carriers, a preventable implantable cardioverter defibrillator would be indicated in these patients (42,44).

NKX2-5 gene mutation: the NKX2-5 gene is located on chromosome 5 (5q34), which contains two exons encoding a 324-amino-acid protein. As a transcription factors of the nucleotide kinase (NK)-2 class, NKX2-5 contains three highly conserved regions: the homeodomain, the tinman domain and the NK2 domain (47). Nkx2-5 is necessary for cardiac development as well as maintaining proper function of the AV node and myocardium throughout adult life (48).

Homozygous inactivation of Nkx2-5 in mammals impairs cardiac looping and is embryonic lethal (49,50). Mice with a heterozygous cardiac-specific Nkx2-5 deletion exhibited a more subtle phenotype, which consisted of ASD, abnormality of aortic valve, and, in female mice, prolongation of the PR interval (51). To date, 61 different mutations have been identified (39,41,44,52-57). Schott et al. (39) also reported three different NKX2-5 mutations (Gln170Ter, Thr178Met, and Gln198Ter) in patients with ASD and AV conduction disturbance. Two mutations were located in the DNA-binding homeodomain of NKX2.5 and are likely to alter the affinity of target DNA binding, the other two were found to result in the deletion of C-terminal amino acids aberrantly augmenting transcription of downstream genes. Most of the NKX2-5 mutations (62%) are amino-acid substitutions. The rest are premature stop codons (46).

Recent extensive molecular study on transcriptional factors has elucidated the genetic background of hereditary ASD accompanied with arrhythmias. We need to carefully examine not only cardiac problems, but also the whole body of patients with ASD. Especially in the case of hereditary ASD, genetic testing will prevent future unexpected SCD due to bradycardia or tachycardia in both probands and their family members.