Video-assisted thoracoscopic surgery (VATS) technique has been making great progress with the developments of the imaging system and skills of thoracic surgeon. Complex procedures like sleeve lobectomy, vessel reconstruction can be safely done by a skillful hand (1,2). However, its application for a large central-typed lung cancer is still challenging. Here, we presented a case of VATS left upper lobectomy and double-plasty for a giant central lung cancer complicated with intratumoral abscess, and described technique details of the difficult VATS procedures (Figure 1). 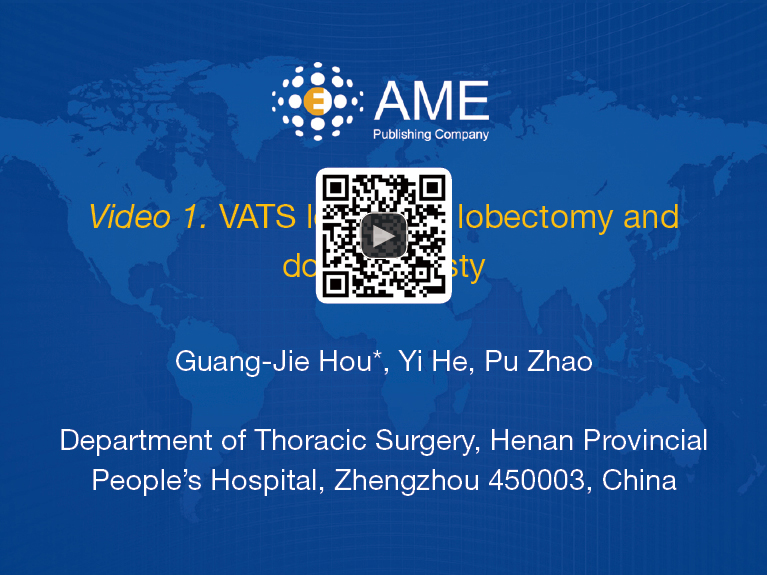 A 70-year-old male complained of chest pain, dyspnea for a month was admitted to our hospital. His chest CT scan revealed a large mass (12 cm × 10 cm × 7 cm) in his left upper lung lobe, invading the anterior trunk of pulmonary artery. Bronchoscopic study showed intraluminal lesion obstructing the superior segmental bronchus and squamous cell carcinoma was diagnosed by pathology. As no bulky lymph node in mediastinum or distant metastasis was found, he was diagnosed as left upper lung squamous carcinoma (cT4N0M0, stage IIIA). While doing his pretreatment evaluation, the patient got a sudden high fever (>39 °C), with his WBC and PCI markedly elevated. Diagnosed as obstructive intratumoral abscess, the old man received prompt antibiotic treatment, but there wasn’t any improvement after 4 days’ therapy. We decided to perform surgical resection focusing on both infection control and radical treatment for cancer and thoracoscopy was employed to reduce trauma.

In the operation, the patient was placed in a right lateral decubitus position. A 10 cm utility-incision was made in the 4th intercostal space with no rib spreading and 1 cm camera port was in the 7th intercostal space in the mid-axillary line. The first step was to mobilize the mass from the chest wall and mediastinum en bloc extrapleurally, paying attention not to injure the left innominate vein. Then, the pericardium was cut open to confirm the extent of the tumor and the phrenic nerve was not preserved since it was invaded by the tumor as well as part of pericardium. Then, keeping the lung retracted posteriorly by an assistant, lung structures were dissected in a direction from anterior to posterior. The superior pulmonary vein was dissected and divided by stapler intrapericardially. Then, the oblique fissure was divided, and the upper lobe bronchus was directly cut open by cautery. Next, the root of left pulmonary artery and proximal lower lobe artery were dissected and blocked respectively by Rummel. After this step, the invaded branches of pulmonary artery were cut open by a scissor and the vessel stumps were sutured. Then, the specimen was packed into a rubber glove and removed out. At last, the bronchus stump was sutured and buttressed with pericardial patch, mediastinal lymphadenectomy was completed. Without any accidentally bleeding, the whole operative time was 350 min and blood loss was 100 mL. After the operation, high fever resolved soon and pathologic stage was pT4N2M0. The patient was discharged 20 days after the surgery.

Generally, large and central-typed lung cancers are still challenging in VATS operation. The majority of these patients are in advanced stage and have a relatively poor prognosis. According to NCCN guideline, some of them such as N2 patients should receive neoadjuvant therapy first. However, sometimes, a few patients may develop into an obstructive pneumonia or intratumoral abscess that could hardly be controlled by drugs and other conservative measures, making it the best choice for operation rather than chemo- or radiation therapy because infection may be rather fatal to the patient. Few reports have been published concerning surgical procedures for non-small cell lung cancer (NSCLC) patients with respiratory infections (4,5). Here, we presented a case of giant tumor with intratumoral abscess treated with VATS left upper lobe resection and double-plasty.

In this case, the tumor was called ‘giant’ because it occupied over 30% of the volume of left chest cavity and we borrowed the word from the concept of ‘giant bullae’. It was also the largest one in our VATS experiences and initially, the thoracoscopy was only supposed to enhance the adhesion dissection of the tumor. when adhesion divided, the tumor was still too large to move and there was very narrow space left for most of dissection.

Some key points of the operation are as following: (I) extensive adhesion with chest wall and mediastinum of the tumor was precisely dissected with assist of thoracoscopy, with no accidental bleeding, which was basis and made a space for next procedure; (II) the pulmonary trunk was blocked or preventively blocked in some central tumor invading the vessel, that made the operation much safer; (III) the upper lobe bronchus was directly cut open by cautery, which was quite easier and safer than by a stapler. Then, retracting the distant upper bronchus and lung posteriorly, the pulmonary artery and its branches could be better exposed and dissected with thoracoscopy.

In summary, through this exceptionally difficult case, we feel that thoracoscopy is helpful to provide better vision and better chances for recovery without compromise of tumor principle.

This video was granted the Award of Great Potential in the 2017 Master of Thoracic Surgery—Video-assisted Thoracoscopic Surgery Video Contest.