Total thoracoscopic lobectomy with systematic lymphadenectomy is a well-documented and widely used procedure. With continuous improvement of minimally invasive techniques and instruments, the indications of thoracoscopic surgery have been expanded based on the concept of anatomical resection. In 2002, Santambrogio et al. (1) reported the first endoscopic bronchial sleeve resection and bronchoplasty. However, due to the difficulty of operation and high surgical risk, this procedure has not been rapidly popularized in clinical practice. In addition, no agreement has been reached regarding indications, incision design, and bronchial anastomotic methods. Based on the skills and experience with thoracoscopy and thoracotomy in our center, we performed total thoracoscopic surgeries to treat patients with central lung cancer. The surgical procedure and the short-term prognosis were satisfactory. 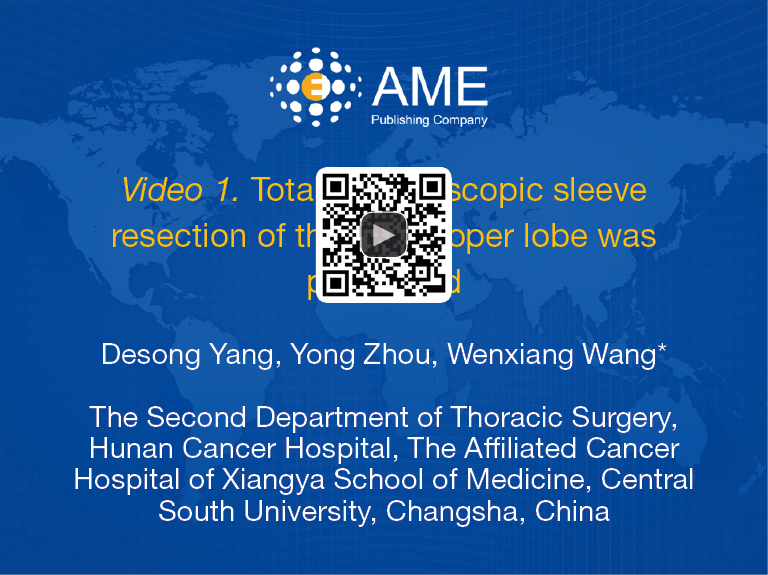 The thoracoscope was used for exploration. Chest adhesions were separated. Implantation metastasis was excluded. The procedure was performed step-by-step clockwise. Lymphadenectomy and lobectomy were simultaneously performed. 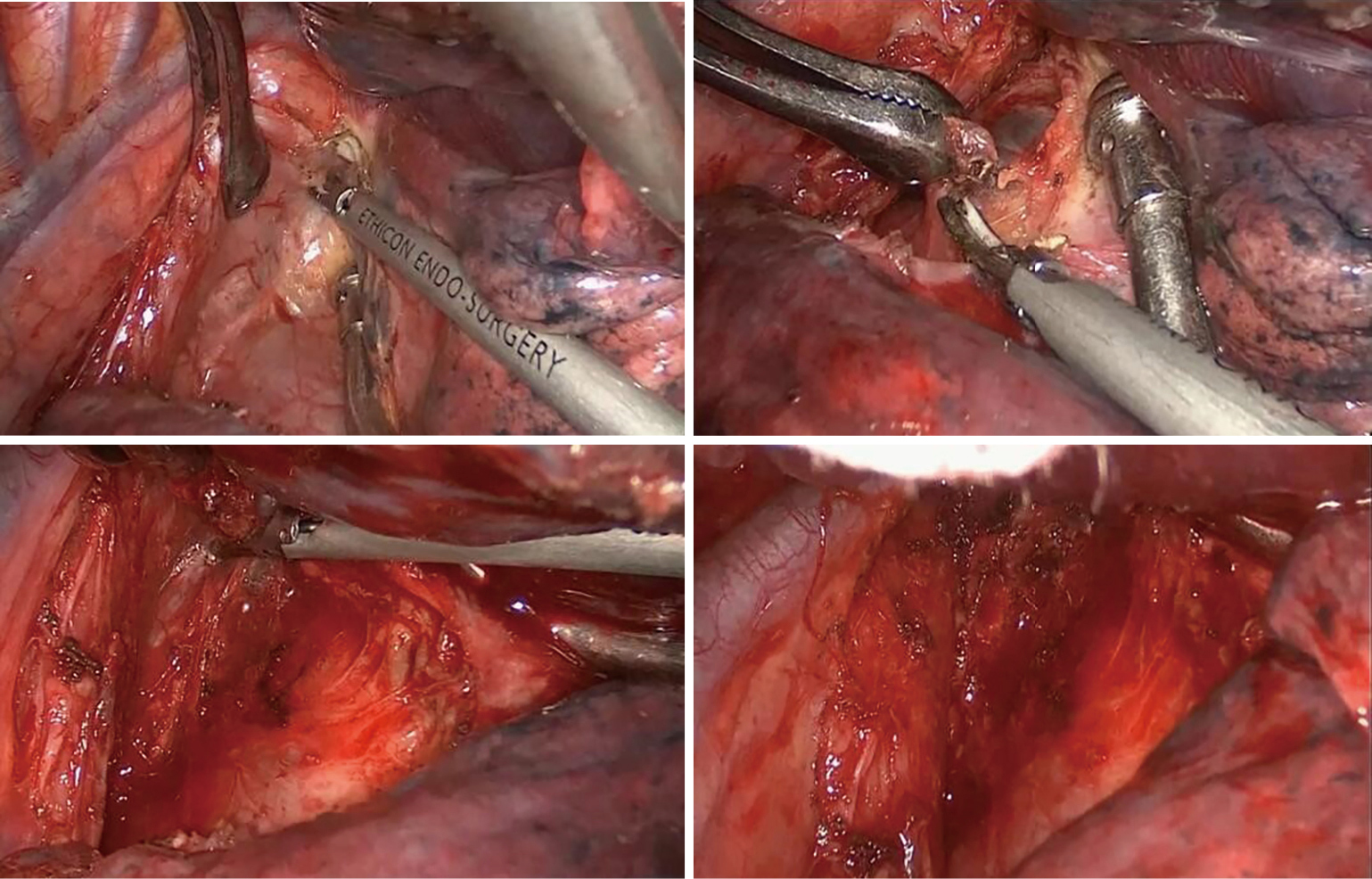 The right lung was retracted anteriorly to expose the posterior mediastinum, and the mediastinal pleura was incised from the level of the inferior pulmonary veins to the lower margin of the arch of the azygos vein. An electric hook and ultrasonic knife were used alternatively to excise the esophageal bronchial arteries and the perforating branches along the lateral side of the esophagus until visualization of the left main bronchus and the esophagus in the deep and posterior operative fields, respectively, was achieved. Then, along the posterior right main bronchus, the dissection continues from the proximal middle bronchus toward the carina until the level of carinal bifurcation at which the perforating branches of bronchial artery were divided. Thus, the subcarinal and lower paraesophageal lymph nodes were completely removed.

Figure 4 The junction region between the upper right lobe and the intermediate bronchus.

The right upper lobe was retracted toward the top of the chest and the right middle and lower lobes toward the diaphragm to expose the junctional region between the upper right lobe and intermediate bronchus. An electric hook and ultrasonic knife were used alternatively to continue the dissection along the right middle bronchus toward the junctional region until the lymph nodes in this region appear mobile from the adjacent posterior bronchus. The lymph nodes in this area were not resected at this time.

The upper right lobe was retracted downward to expose the superior mediastinum. An inversed “T”-incision was made above the arch of the azygos vein and anterior to the vagus nerve to incise the superior mediastinal pleura. First, the lymph nodes and surrounding tissue were dissected along the posterior superior vena cava to the level of posterior right innominate vein. Then, the lymph nodal tissue in this region was retracted upward. The dissection continued inferiorly through the space posterior to the arch of the azygos vein to the level of the anterior carina. Then, the deep sides of the lymphatic and adipose tissues between the venous cava and trachea were mobilized superiorly and excised at the level of posterior right innominate vein. Then, these lymph nodes were retracted and dissected from the anterior trachea until the level of the right subclavian artery. The lymph nodes in this region were completely removed using this procedure. 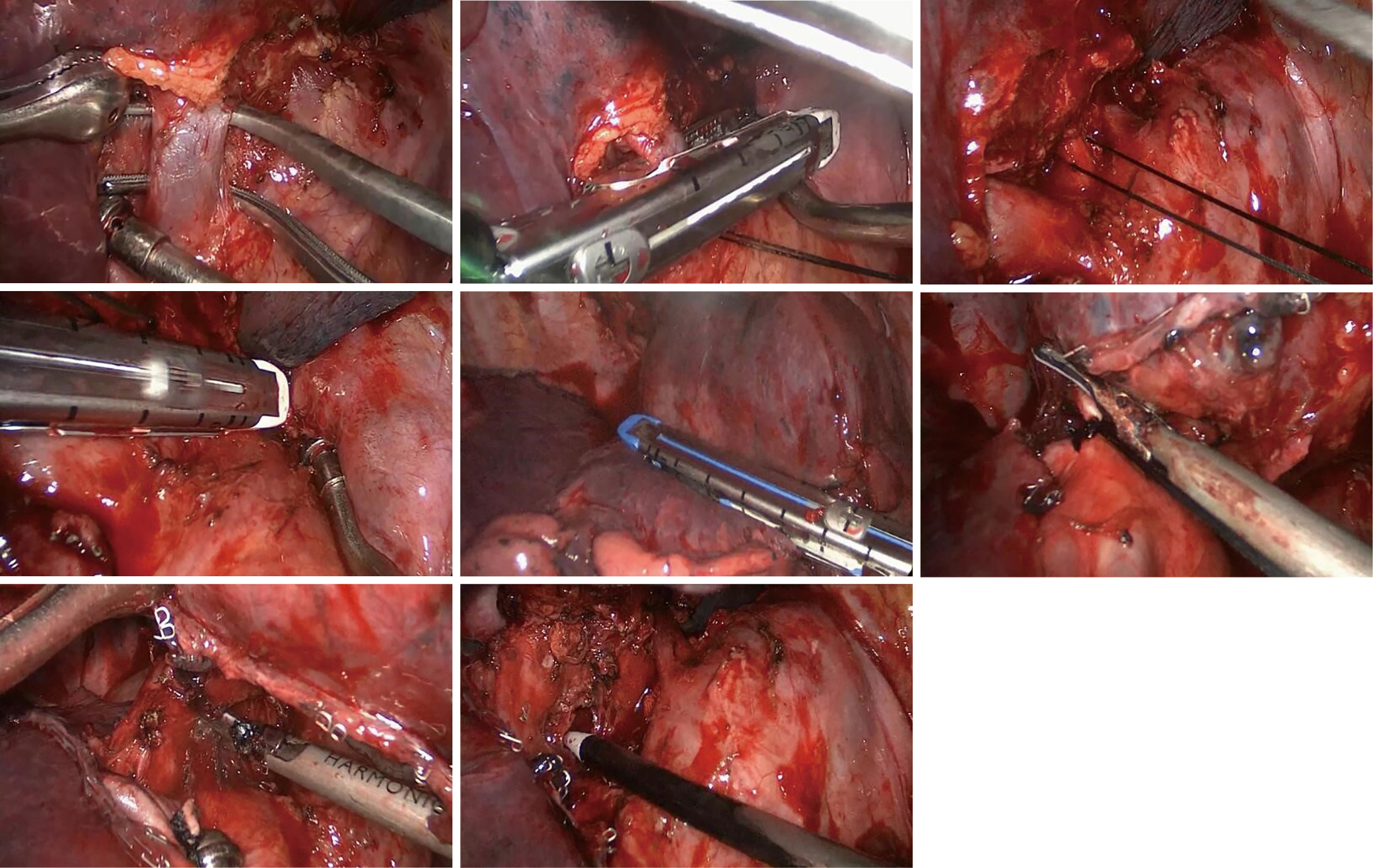 The skeletonized right upper lobe bronchus was retracted. A pointed tip scalpel was used to incise the targeted site of the right middle bronchus and the right main bronchus. Then, endoscopic scissors were used to divide the middle bronchus followed by the right main bronchus, while the right upper lobe was retracted. The bronchial stumps were trimmed. The proximal and distal margins of the bronchus were sent for frozen section. A confirmation of no visible cancer cells in the margin tissue indicates the completion of sleeve resection. 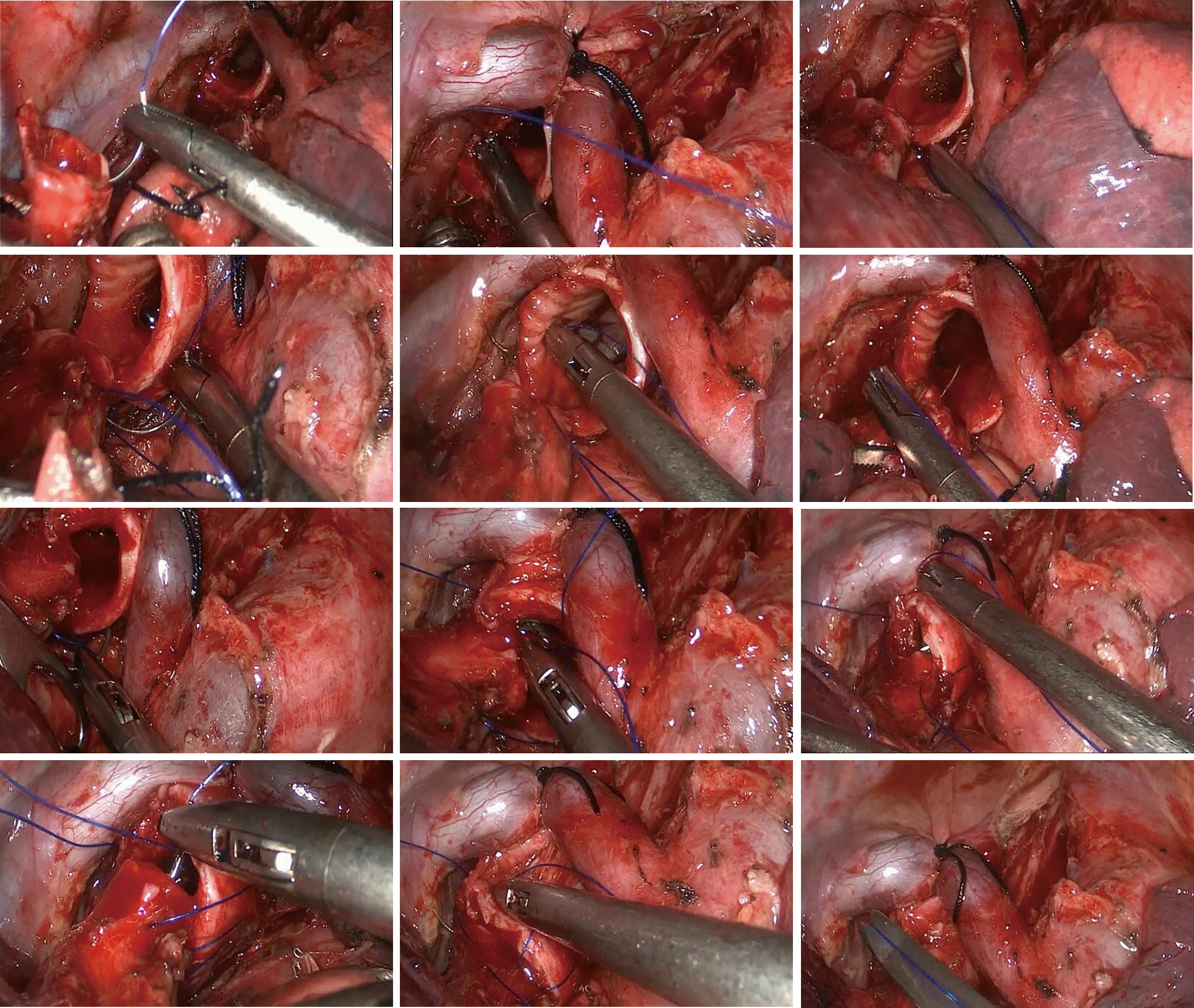 The delicate design of the surgical procedure served as the basis to simplify and expedite the procedure with quality assurance. We believed that the key to simplify this type of procedure is to remove mediastinal and hilar lymph nodes at the beginning. Anatomical lobectomy is then performed to achieve “skeletonization” of the bronchus that is prepared for sleeve resection. Then, bronchial sleeve resection and anastomosis were performed. This operating pattern can significantly reduce the surgical difficulty. Bronchial anastomosis is the rate-limiting step of this procedure. Currently, endoscopic bronchial anastomosis methods include intermittent (3,4), continuous (5-7), and continuous mixed with intermittent (8,9) sutures. Intermittent suturing is relatively reliable in theory, but interrupted suturing is more easily achieved due to multiple sutures in the thoracic cavity. Moreover, repeated knotting during interrupted suturing can significantly prolong the operative time. Regarding continuous suturing, tightening the suture at the end may not avoid interference with the loose suture, which can still affect the suture speed. Our experience is as follows: 3-0 prolene sutures (single suture with double needles) can be used for bronchial anastomosis. The suture should be maintained with tension during the operation; the needles should be introduced out of the thoracic cavity via the main or assisting port to avoid suture complications during surgery and ensure reliable anastomosis. In addition, the use of dual-lumen endotracheal intubation can achieve a good single lung isolation and ensure better exposure of the operative field.

Funding: This work was financed by Grant-in-aid for scientific research from the Natural Science Foundation for the Youth of Hunan province of China (No. 2018JJ3314).

Conflicts of Interest: This video was granted the Award of Great Potential in the 2017 Master of Thoracic Surgery—Video-assisted Thoracoscopic Surgery Video Contest.

Informed Consent: Informed consent was obtained from the patient.