The development of chest computed tomography (CT) resulted in the increased diagnosis of ground glass nodules (GGNs) (13). The GGNs in a thin section in chest CTs are generally correlated with clinical features (14). In 2011, the Japan Clinical Oncology Group reported that the specificity for noninvasiveness is 98.7% in adenocarcinoma ≤2.0 cm with a consolidations/tumor (C/T) ratio ≤0.25 (15). By contrast, a prospective multicenter study reported that pure GGNs and heterogeneous GGNs do not develop into invasive adenocarcinoma within a mean follow-up duration of 4.3 years (16). Based on these findings, limited resection is generally accepted for GGNs ≤2 cm with a C/T ratio ≤0.25.

A 6-month-old female Korean native black pig was prepared for the procedure. The animal was quarantined and acclimated in the preclinical animal experiment center in Osong, South Korea, for 1 week before the surgery. With the pig in the left lateral decubitus position, general anesthesia was induced with 2% sevoflurane. A lateral thoracotomy was performed to approach the thoracic cavity. Before performing a wedge resection, the thickness of the porcine lung tissue was measured with calipers, and then the proper site for the wedge resection was determined. Using NALS (a 60-mm long blue stapler with 3.5 mm staples), we performed a wide wedge resection in the right upper lobe to evaluate the stapler. To compare the extent of tissue damage to the true resection margin tissue, we used a popular commercial three-row stapler as a control (Figure 3). 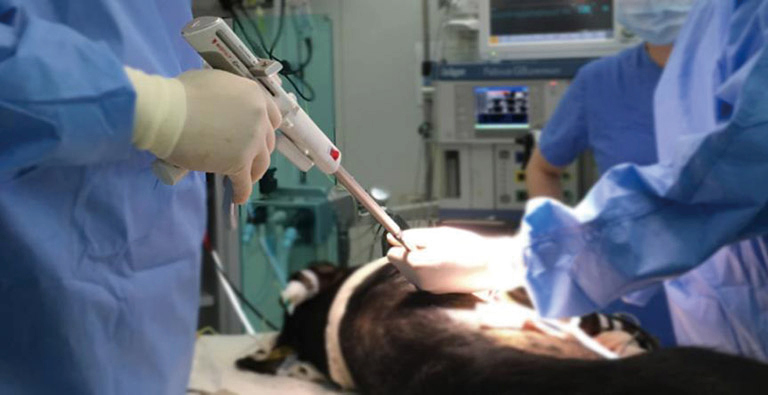 This study was approved by the institutional review board of Osong Medical Innovation Foundation, Cheongju, Chungbuk, Republic of Korea (KBIO-IACUC-2017-004).

The right upper lung was widely resected using both staplers. Both use titanium fasteners of the same height and we used a commercial blue cartridge for medium tissue thickness. 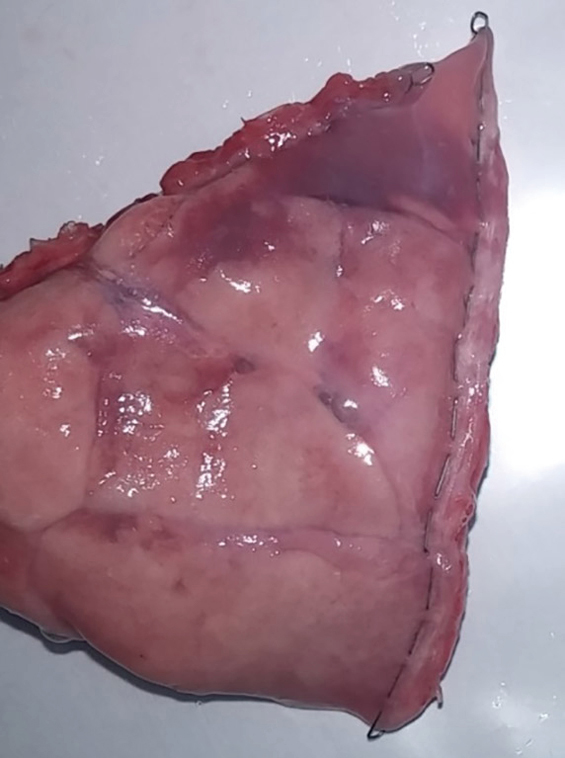 Figure 4 Resected porcine lung with the novel asymmetrical stapler. There is only a single row of staples. The tissue between the staple row and cutting edge is the ‘true’ resection margin.

With NALS, there was no squeezing artifact at the true resection margin on microscopic examination and all of the alveolar structures were preserved for evaluation. By contrast, with the conventional stapler, there was severe squeezing artifact and subsequent tissue damage caused by the titanium fasteners making the evaluation extremely difficult (Figure 5).

With the development of chest CT, the diagnosis of early NSCLC has improved, which has resulted in an increase in limited resection in patients who can tolerate a lobectomy. The oncological outcomes in recent studies support this trend (18-20). Hence, we are concerned with the failure to obtain an R0 resection with a limited lung resection in early lung cancer.

This animal study had several limitations. First, we performed a wide wedge resection in a single pig. Although we demonstrated the feasibility of NALS, we could not determine the statistical difference between it and the conventional stapler. Second, the wedge resection was performed in a pig and not in human tissue. Therefore, more studies of human tissue are required to evaluate potential safety issues.

Ethical Statement: This study was approved by the institutional review board of Osong Medical Innovation Foundation, Cheongju, Chungbuk, Republic of Korea (KBIO-IACUC-2017-004).