Premitive neuro-ectodermal tumour of the lung

Primitive neuroectodermal tumors (PNETs) occur most frequently in the bone and soft tissues of children or young adults. The most common sites of origin for osseous lesions are the long bones, such as the femur or humerus or the pelvic bones. Soft tissue lesions arise more frequently in the deep tissues of the paravertebral or thoracic regions, lower extremities, and pelvis. Infrequently, PNETs have been described in other organs, such as the kidney, as primary neoplasms, or as arising from other tumors, such as ovarian or testicular germ cell neoplasms (1,2). Those PNETs that arise in the lung parenchyma without pleural or chest wall involvement are extremely rare, and very few cases have been reported in the literature (3). Only about 50 cases have been reported in the world literature. We report a case of a PNET of pulmonary origin in an adult who had an aggressive pattern of behavior.

A 26 years old male presented with chest pain and grade 3 dyspnea (MRC grading) of one month duration. He was a labourer and a non smoker with no history of exposure to any occupational or inorganic dusts. Breathlessness was of sub-acute in onset and progressed over a period of 30 days and he had difficulty in caring out routine activities. The chest pain was located in retrosternal region and pricking in character with neither radiation, nor related to the meals. There was dry irritant type of cough without any expectoration. There were no complaints of hemoptysis and wheezing. There were no other symptoms suggestive of any other organs involvement. He was thinly built person with BMI of 18, and had no clubbing and lymphadenopathy. Respiratory system examination revealed diminished movements on the left hemi thorax. There was stony dullness on the left hemi thorax, and breath sounds were absent in left basal regions. No adventitious sounds were heard. Chest radiograph revealed a uniform density homogenous opacity in the left lower zone with corrugated smooth margins. Mediastinum was in the midline. Routine blood investigations were within normal limits. Computed tomography of the thorax revealed a large well defined heterogenous mass in the left lower lobe lung parenchyma. There were some areas of necrosis within the mass and it was extending up to the pleural surface (Figure 1A). There was involvement of the mediastinal lymph nodes, mainly, left hilar group, subcarinal, pretracheal and aorto-pulmonary lymph nodes. Fibreoptic bronchoscopy revealed congested lower lobe bronchus with no intrabronchial presence of any growth. Bronchial washings, bronchial brush biopsy and endobronchial biopsy were inconclusive. Trans-thoracic fine needle aspiration biopsy of the mass revealed small round to oval tumor cells with thin strands of fibrous connective tissue. As the diagnosis was inconclusive even after fibreoptic bronchoscopy and biopsy of the mass, the patient was taken up for thoracotomy with excision of the tumor. Intra-operatively it was observed that there was a large firm mass occupying the left lower lobe with extension of the growth towards the hilum as well as towards the pleural region. There was no involvement of the great vessels and the pericardium. Mediastinal lymph nodes i.e. left hilar group, subcarinal group, and aortopulmonary group were involved. As the mass was extending up to the pleura, debulking of the tumor was done to the extent possible. Histologically, the specimen revealed sheets of pleomorphic round to oval cells, with enlarged hyperchromatic twisted nuclei and amphophilic moderate eosinophilic cytoplasm. The neoplastic cells were arranged in fascicles that closely resembled the architecture of leiomyosarcomas (Figure 1B). They had numerous mitotic figures and areas of necrosis. Immunohistochemistry of the resected lung specimen revealed that the tumour was poorly differentiated neuroendocrine carcinoma of the lung. The tumor cells expressed Cytokeratin and Synaptophysin (Figure 1C,D) and were immunonegative for TTF -1 and Chromogranin A. The patient received radiotherapy during post-operatve period with 4000 Rads and chemotherapy with Cisplatinum, Bleomycin and Doxorubicin. The patient continued to be symptomatic, and his condition worsened over a period of next three months and he died subsequently three months after the diagnosis. 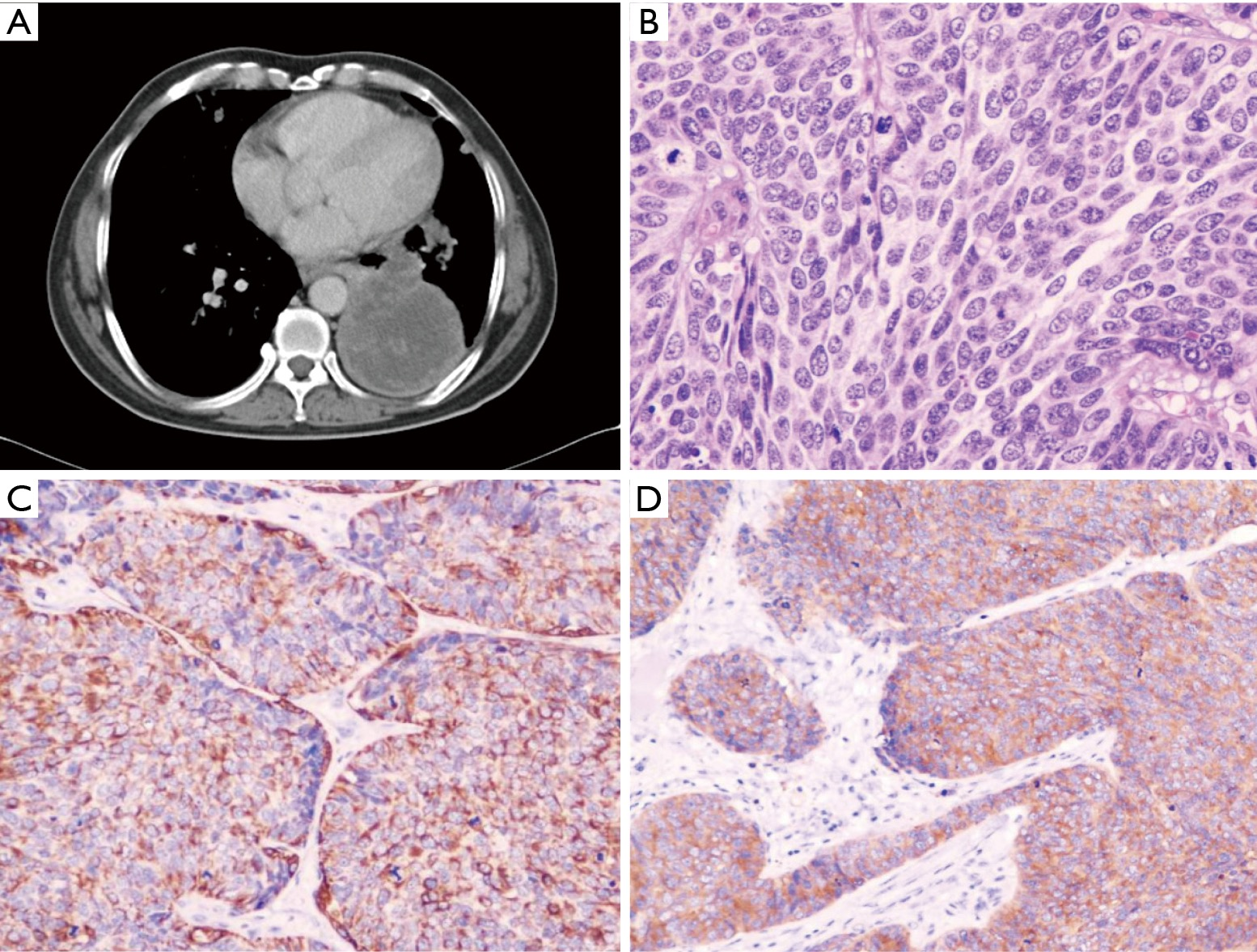 Figure 1 (A) CT scan of the thorax showing large well defined heterogenous mass in the left lower lobe lung parenchyma. There were some areas of necrosis within the mass and it was extending up to the pleural surface. Tumour margin was ill-defined and irregular in outline; (B) Specimen of the primitive neuroectodermal tumor appeared as sheets of small round to oval cells with scant cytoplasm and focal necrosis (Hematoxylin and eosin; ×312); (C) Tumour cells expressing Cytokeratin (CK+, Original magnification ×400); (D) Tumour cells expressing Synaptophysin (Original magnification ×400).

PNETs are small round cell malignant neoplasms of neuroec-todermal origin. The combination of a shared chromosomal translocation (t[11;22] [q24;q12]), cellular physiology, and clinical response has led to categorizing PNETs in the Ewing sarcoma family of tumors. These tumors often involve the thoracic wall, and primary pulmonary and cardiac involvement is quite rare. Primary intrapulmonary PNET without parietal pleura or thoracic wall involvement is very rare. Most of the case reports of PNETs have suggested that these tumors are highly aggressive neoplasms that rapidly give rise to metastatic disease and death (4). Most patients with PNETs are adolescents or young adults. The patients with pulmonary PNET previously described had an age range of 15 to 64 years, with a mean age of 33 years (3). Chest pain, an enlarging mass, and/or symptoms of nerve deficit are the common presentations, and may persist for several months or years, and are frequently associated with a long standing mass. Local recurrence is quite common.

The diagnosis of PNET of lung, once difficult for the surgical pathologist, is greatly facilitated now by the availability of antibodies such as HBA-71, 12E7, and O13 that recognize the cell surface antigen defined by the cluster of CD99. Although not specific for PNET or Ewing sarcoma, CD99 is almost always present in these tumors (1). It must be used together with antibodies to vimentin, NSE, neurofilaments, and other markers determined by the differential diagnosis of the individual case to exclude lymphoma, carcinoma, or sarcoma (5). PNETs can be differentiated by characterizing the neural ultrastructure (e.g., neuro-secretory granules, neurofilaments, and neurotubules) on electron microscopy or the immunohistochemical expression of at least four neural markers, including CD- 99, NB-84, NSE, S-100, desmin, myogenin-MyoD1, CK, and LCA (6). Imamura et al. (7) also observed expression of Mic2 protein and t[11;22] (q24;q12) translocation were proved in the tumor cells in their report of two cases. The tumor cells were positive for periodic acid-Schiff (PAS), neuron-specific enolase (NSE), and vimentin, but negative for Leu7, chromogranin A, and pro-gastrin-releasing peptide (ProGRP).

Computed tomography (CT) and MRI of the thorax mostly show large tumors, often with a heterogeneous appearance because of areas of hemorrhage and necrosis. CT and MRI are preferred in detecting small pulmonary metastases and in determining invasion of chest wall muscle, respectively. PNETs have a very high rate of local recurrence and a propensity to metastasize. The most common sites of dissemination have been reported in bone (35–50%), bone marrow (29–33%), lung (18–50%), liver (20%), lymph node (10–12%) and spleen (10%), and metastases in multiple sites (35%) have also been seen (8). It has been observed that tumor burden at presentation is the single most important prognostic factor, followed by response to treatment, itself partly determined by tumor size (4).

Based on this small number of cases, pulmonary PNETs are aggressive neoplasms that have a clinical course similar to PNETs of other organs. In general, almost all patients who developed metastases die of their disease as do 75% of patients with localized disease. The treatment of choice is early surgical removal with intensive chemotherapy and radiation therapy to ablate residual microscopic disease. Chemotherapy leads to tumor shrinkage, which in turn allows operability with wide tumor free margins (8). Chemotherapy consists of Vincristine, Adriamycin, and Cyclophosphamide along with local radiation therapy. The patients with incomplete resections had very limited survival and the patients who survived for a long time were those who had wide tumor-free margins. Some adjuvant radiotherapy modifications, such as brachytherapy or the CyberKnife, could be beneficial in these patients. These modalities have been shown to be effective in the treatment of PNETs, different tumors of the spine, lung cancer or tumors in other parts of the body (9).

The present case describes one of the few reported cases of the PNET entity in an adult. The initial biopsy was misleading, most likely because the tumor itself was not biopsied: only the tumor’s surrounding fibrovascular casing was biopsied. Diagnosis in this could be achieved only after the complete excision of the tumour and on immunohistochemistry examination. Primitive neuroectodermal tumor lesions are aggressive and usually lethal; they should be considered in the differential diagnosis of thoracic tumors regardless of the age of the patient. Once a diagnosis of PNET has been made, early wide excision of the tumor, along with multimodality chemo- and radiotherapy, should be undertaken to offer any hope of a long-term cure. In the present case, wide excision of the tumor was done and he was also given adjunct radiation therapy and chemotherapy, but due to the rapid progression of the tumor, the patient succumbed to the disease within 2 months after the diagnosis.