Uniportal video-assisted thoracic surgery (VATS) lobectomy has been still in evolution and facing many challenging issues, especially for a large central type tumor. In the past, patients with a tumor larger than 5 cm in diameter were considered as contraindication for VATS. However, the progress of VATS techniques has overcome this limitation (1,2). To confirm the radical manner of the lobectomy, preoperative study of the computed tomography (CT) images is vital to the whole process of the surgical procedure. Meanwhile, utilization of a cranial-caudal single-direction fissureless technique with closer camera view of the targeted structures can often lessen the difficulty of the procedure.

A 59-year-old man had a persistent cough for 6 weeks. A 7 cm × 6 cm × 6 cm tumor in diameter at the right upper lobe was identified on enhanced chest CT (Figure 1). Preoperative bronchoscopy detected the neoplasm at the orifice to the anterior segmental bronchus of the right upper lobe. The biopsy revealed as adenocarcinoma. Preoperative imaging studies confirmed the clinical diagnosis as lung cancer and defined the disease as stage IIb–IIIa (T3N0–1M0). Neoadjuvant therapy prior to radical treatment is recommended by our multidisciplinary team. However, the patient denied this form of treatment and urged for surgery. It was considered operable according to the pulmonary reserve testing and cardiac work up. 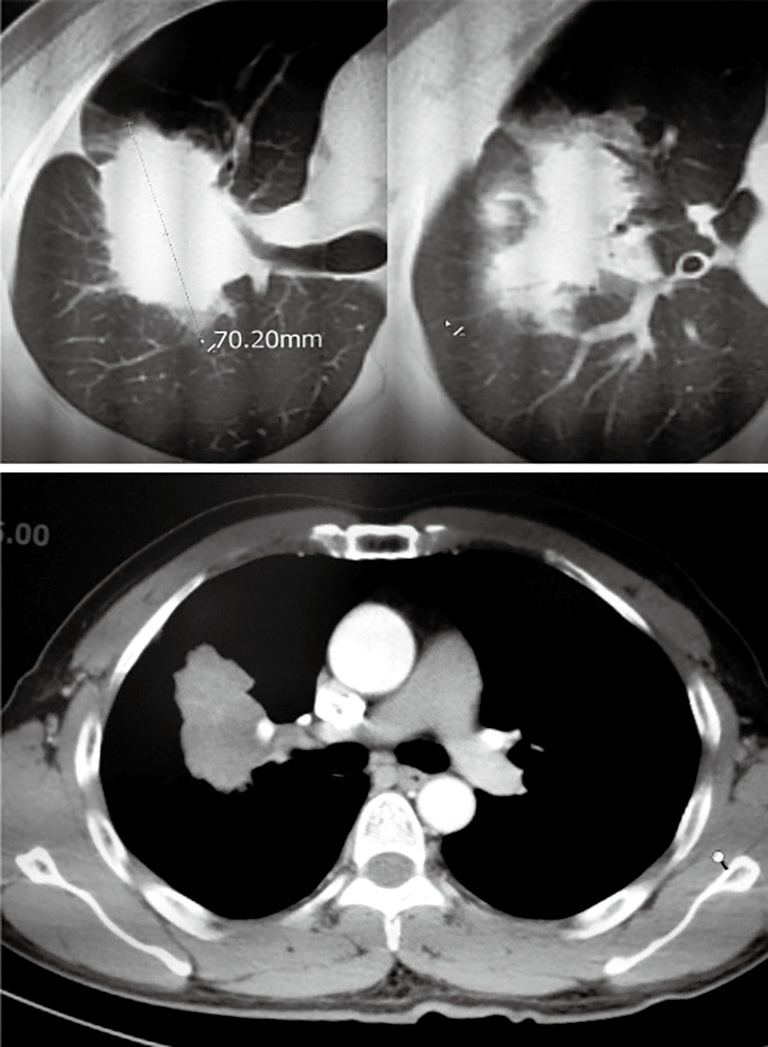 General anesthesia with a double-lumen endotracheal intubation was performed before surgery. The patient was placed at the left lateral position. Only one incision, about 4-cm long, was made at the 4th intercostal space in the mid-axillary line. A lap-protector was then placed at the incision. The surgical procedure was facilitated by aligning the 30° angled view of the camera with the general direction of the dissection. Combined utilization of sharp, blunt or cautery-based instruments, the division and ligation methods of the lobar structures was similar to that during three-portal VATS. For example, bronchial arteries must be cauterized or clipped; lobar structures can be ligated with stapler, suture, as well as hemolocks. In our experience, utilization of a cranial-caudal single-direction fissureless technique with closer camera view of the targeted structures can often lessen the difficulty of the procedure during the uniportal VATS upper lobectomy (Figure 2). 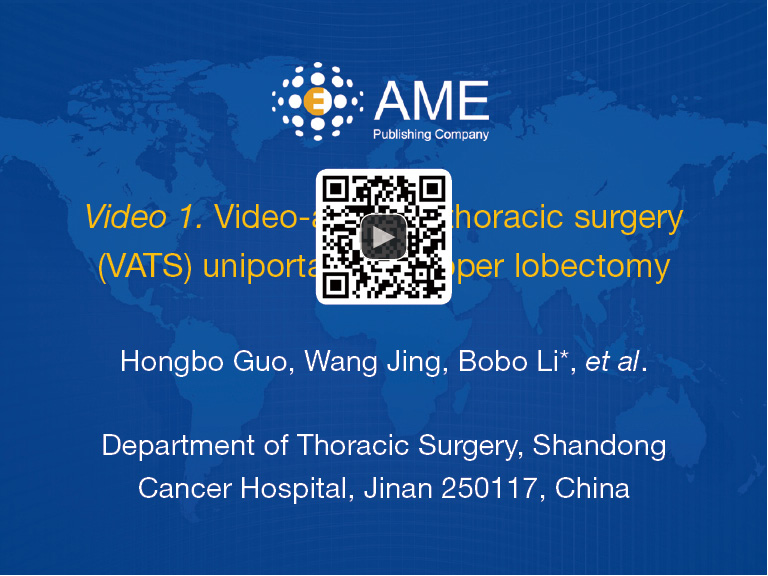 The intraoperative exploration was first carried out under camera view. A large tumor was clearly identified and located at the right upper lobe. The visceral pleura was invaded. The whole surgical procedure was listed as following steps. 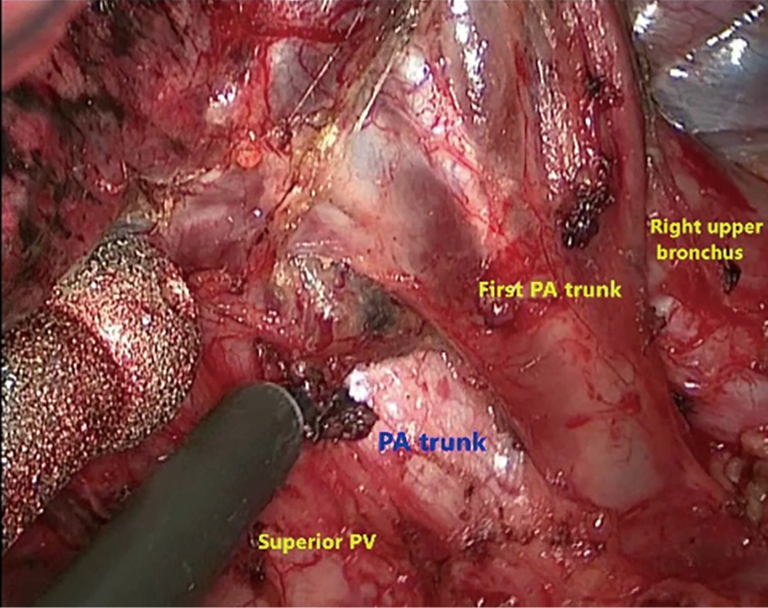 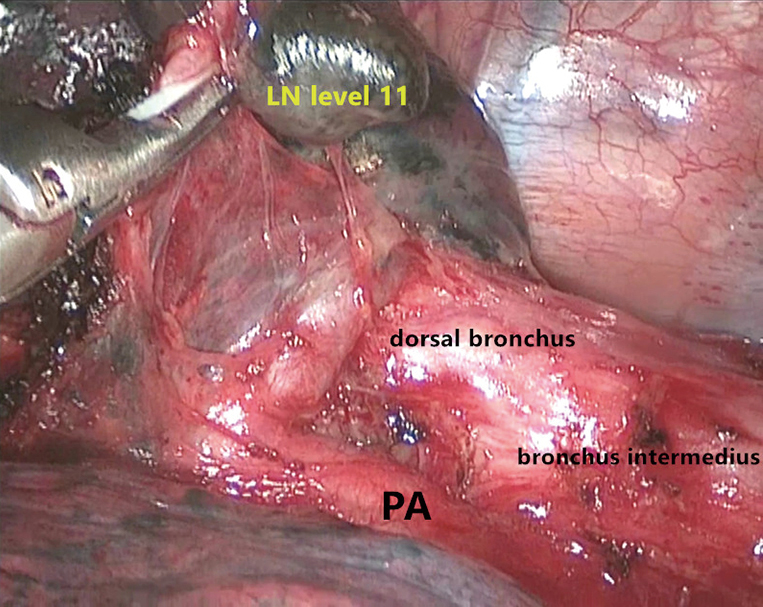 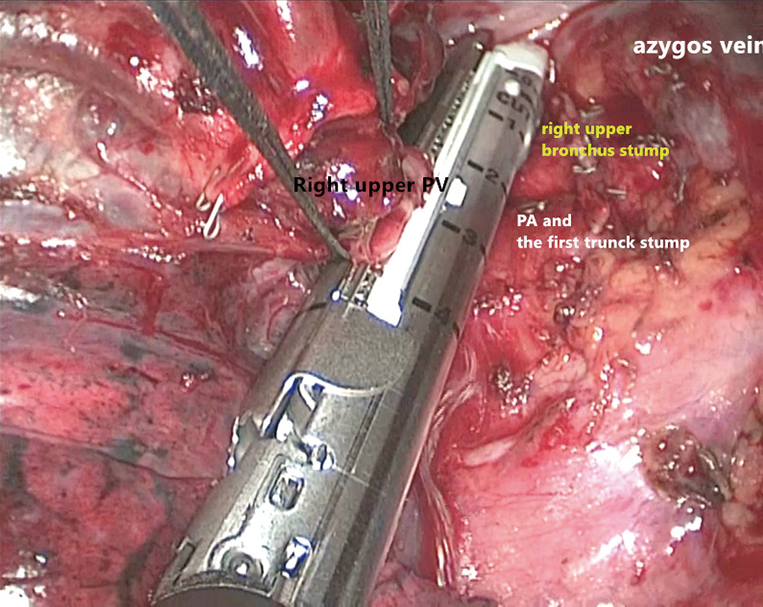 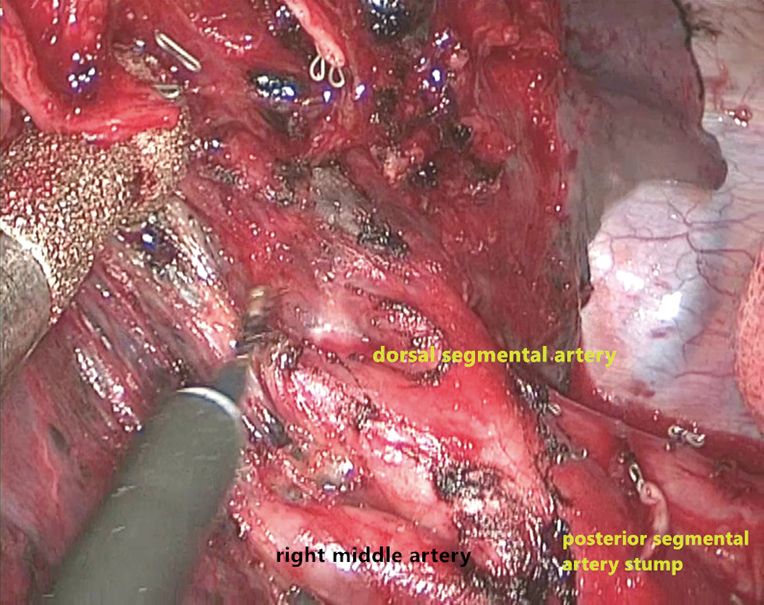 Figure 6 Dissection of the lymph nodes and soft tissues adjacent to the fissure.

With the progress of uniportal VATS technique, it is now feasible to handle a large central type tumor during VATS lobectomy. In our experience, preoperative study of the CT images is very important for a large tumor (≥5 cm in diameter). The surgeon must be sure that the hilar structures can be isolated safely based on the imaging modalities (4). During surgery, a close camera view can often facilitate the operative procedure. Uniportal upper lobectomy offers a better view in comparison to multi-portal VATS. Meanwhile, we advocate the “fissureless” approach in upper lobectomy, the isolation and ligation of the lobar structures were dissected towards a “cranial to caudal” single direction, dividing the fissure last. This technique can be very useful in the management of the large central type tumor during uniportal upper lobectomy. As showed in this case, stapling the PA branch cranially first, then the upper bronchus or PV, followed by the posterior ascending PA branch, and the fissure is left last to be dissected. The fissureless approach can be more advantageous for patients with fissure problem. A surgeon should also be aware that the flexibility with the multiple operative techniques in performing VATS for patients with larger tumors. The last we want to emphasize the radical resection of the carcinoma. Be sure not to press the tumor when pulling the lung to expose the hilar structures. En bloc resection during lobectomy and lymphadenectomy can offer a precise pathologic staging and decreases the recurrence.