Hydrocortisone in septic shock: all the questions answered?

Regarding sepsis, a fundamental change in the understanding of the pathophysiology has evolved in the last five decades, from the early concepts of an overwhelming inflammation to disease models increasingly based on the role of a dysregulated host immune response (1). Consequently, the first therapeutic attempts to use corticosteroids in sepsis applied high doses in order to effectively suppress hyper-inflammation. The doses used in clinical trials were a multitude of scales above physiological dose ranges, using synthesized steroid compounds with high glucocorticoid activity. However, these early clinical trials failed and showed severe side effects leading to the end of this therapeutic concept (2).

The revival of steroid therapy in sepsis based on a different theory centered on the supplementation of low dose cortisol to substitute a lack of endogenous steroid activity in phases of severe stress, instead of maximally suppressing the immune answer with high-dose steroids (2-4). The pathophysiological theory currently discussed is the concept of CIRCI: critical illness related corticosteroid insufficiency (5,6). It is assumed that the diseased organism is able to increase corticosteroid hormone activity only to a certain degree. In severe disease states such as severe septic shock, even maximally increased corticosteroid hormone activity may be insufficient; moreover, disease specific mechanisms negatively interact with steroid effects on different levels (7).

A faster resolution of septic shock with supplementation of stress doses of hydrocortisone had been proven in small trials (3,4). The first large-scale clinical trial demonstrating positive effects of corticosteroids in sepsis was the study by Annane et al. published in 2002 (8). In a placebo controlled trial 300 patients with septic shock received a short corticotropin test, followed by a seven-day treatment of 50 mg bolus hydrocortisone every 6 hours supplemented by daily fludrocortisone, or placebo. In this study, treated patients showed a survival benefit.

Interestingly, a second large-scale placebo controlled trial (CORTICUS) with 499 patients receiving the same dosage of hydrocortisone or placebo failed to show a survival benefit for the treated patients (9). One difference to the previous study was the omission of fludrocortisone, however, the most important differences which have to be discussed with respect to outcome were inclusion criteria, i.e., disease severity: only a quarter of the CORTICUS patients fulfilled the inclusion criteria of septic shock as used in the earlier Annane trial. A post-hoc analysis of the subgroup of CORTICUS trial patients with refractory septic shock showed a treatment effect similar to the Annane trial with an absolute reduction in mortality of 11% (9).

Another highly valuable effort to complete the picture has been undertaken by Didier Keh and the German SepNet Critical Care Trials Group with their randomized placebo controlled study. Keh et al. tested whether hydrocortisone therapy in patients with severe sepsis prevents the development of septic shock. In severe sepsis, the use of hydrocortisone compared with placebo did not reduce the development of septic shock within 14 days. Moreover, this study has clearly shown that severe sepsis without circulatory compromise is a very rare event (10).

Based on the available evidence, the authors of the Surviving Sepsis Campaign (SSC) concluded in 2016 that low-dose hydrocortisone should not be used as a routine adjunctive therapy in septic shock if adequate fluid resuscitation and vasopressor therapy restore hemodynamic stability. In patients who do not reach this goal, 200 mg of hydrocortisone should be given (11). In contrast to the intervention in the randomized controlled trials (RCTs), the authors of the Surviving Sepsis Campaign recommended to administer hydrocortisone as continuous infusion to better prevent hyperglycemia (12).

Recently, two large-scale RCT on hydrocortisone in patients with septic shock were published (13,14). Balasubramanian Venkatesh and the Australian-New Zealand Intensive Care Society Clinical Trials Group investigated patients with septic shock undergoing mechanical ventilation. Septic shock was defined according to the definition of the consensus conference in 1991 (15). This multi-national double-blind RCT (ADRENAL), by far the largest ever undertaken in septic shock, investigated the use of hydrocortisone 200 mg per day or placebo given as a continuous infusion over 7 days in 3,800 patients (13). Although this study did not show differences in death from any cause at 90 days after start of the intervention, the authors found some remarkable improvements in morbidity of patients treated with hydrocortisone. As already proven in previous studies, patients in the hydrocortisone group had a shorter time on vasopressor therapy (median 3 versus 4 days), moreover a shorter time on mechanical ventilation and a shorter length of stay in the ICU. Secondary outcomes such as 28-day mortality, recurrence of shock, renal replacement therapy, bacteremia or fungemia, length of hospital stay and number of days alive outside the ICU did not differ between the groups, after statistical correction for multiple comparisons. Notably, the proportion of patients receiving blood transfusion in the ICU was lower in the hydrocortisone group.

The second double-blind RCT (APROCCHSS) by Djillali Annane and the CRICS-TRIGGERSEP network, investigated the combination of intravenous bolus hydrocortisone (50 mg four times a day) and oral fludrocortisone (50 µg per day) in 1,241 patients. For inclusion in the study the use of vasopressors (norepinephrine, epinephrine) was required at a minimum dose of ≥0.25 µg per kilogram of body weight per minute or ≥1 mg per hour for at least 6 hours to maintain a systolic blood pressure of at least 90 mmHg or a mean blood pressure of at least 65 mmHg. In this study, a significant reduction in death of any cause at day 90 was reported with the use of steroids (43.0% vs. 49.1%, P=0.03). In addition, mortality was reduced at ICU discharge (35.4% vs. 41.0%, P=0.04), hospital discharge (39.0% vs. 45.3%, P=0.02), and day 180 (46.6% vs. 52.5%, P=0.04). Secondary endpoints such as vasopressor-free days and organ-failure-free days to day 28 were significantly higher in patients treated with the two steroids, as was the time to weaning from mechanical ventilation to day 90. The absolute number of adverse events was higher compared to those reported in the ADRENAL trial, but did not differ significantly between the two groups, with the exception of hyperglycemia in the steroids group.

New and common findings in both studies are the beneficial effects on morbidity. Pulmonary function as demonstrated by a shorter time of initial mechanical ventilation or a shorter time to weaning from mechanical ventilation to day 90 was improved in both trials. A reduced length of stay in the ICU is clearly related to accelerated improvements in sepsis-induced organ dysfunctions. The unexpected finding of less patients receiving blood transfusion in the ICU, however, lacks an obvious pathophysiological explanation. Shorter times of mechanical ventilation and especially ICU stay might potentially have contributed to this finding. Still, interactions of steroids with blood coagulation have previously been described (16) and differences in blood transfusion rates depending on steroid therapy have been observed e.g., in the setting of cardiac surgery (17).

The overall 90-day mortality of 28.4% in ADRENAL is lower compared to 46.1% in APROCCHSS and compared to epidemiological data from Germany (18). This may be attributed to the high number of patients with poor prognosis (n=8,263) meeting the exclusion criteria in ADRENAL. The investigators screened 21,818 patients. This means that only 1 out of 6 patients were eligible for the study. In contrast, the French investigators screened only 1,671 patients to finally include 1,241 patients with septic shock. The difference appears to be related, at least in part, to the additional inclusion criterion of norepinephrine/epinephrine therapy at a dose of ≥1 mg per hour for ≥6 hours, which gathered data of a more severely ill group of patients with septic shock (Table 1). 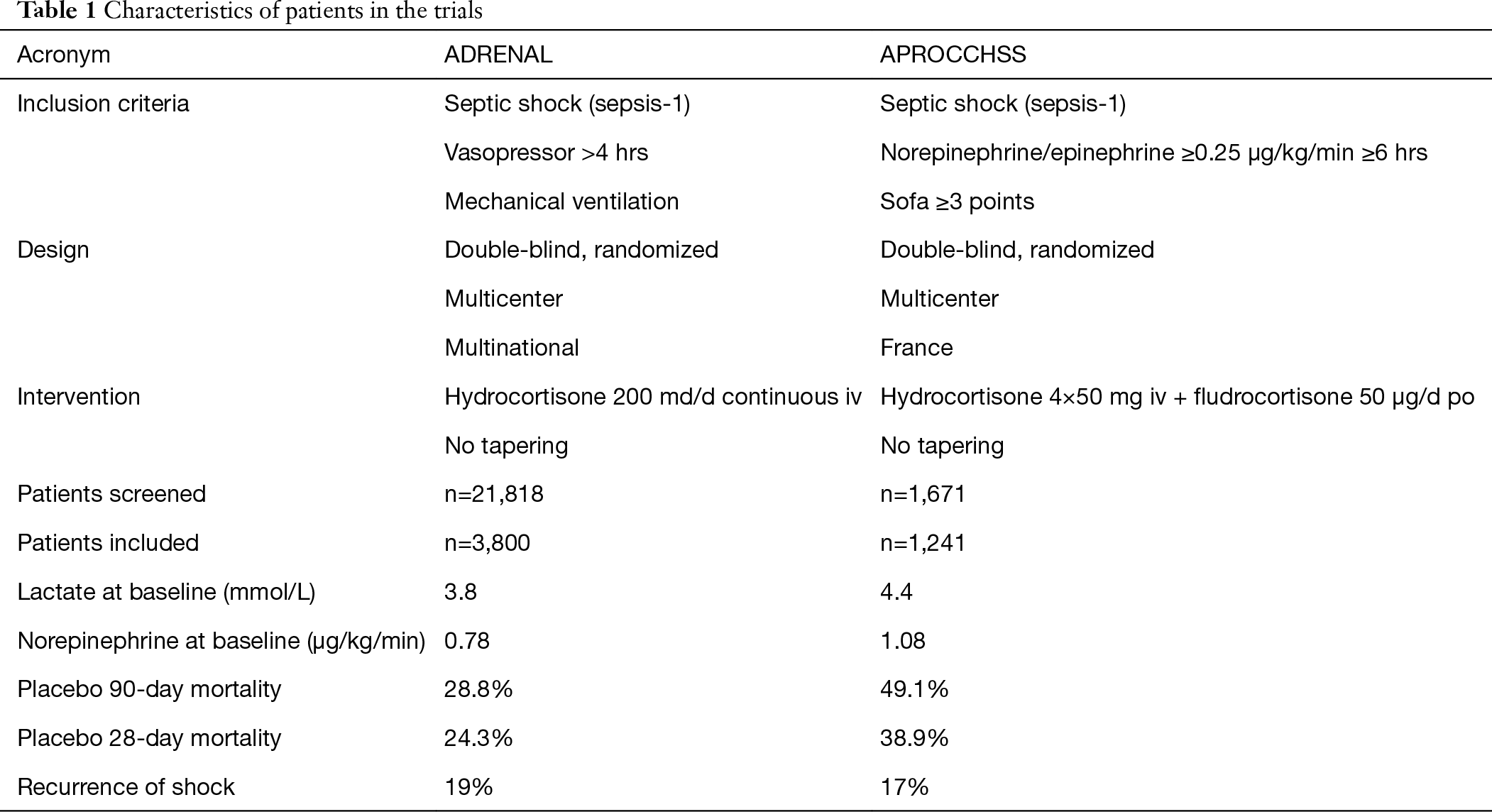 Table 1 Characteristics of patients in the trials
Full table

Looking at the 90-day mortality rates in both studies one may conclude to further support the recommendation of the SSC to use hydrocortisone only in septic shock treated with high-dose vasopressors. However, the multinational ADRENAL trial provides also some information indicating that hydrocortisone may exert beneficial effects in selected target groups with a lower overall mortality. Twenty-eight day mortality showed a statistical difference in favor to hydrocortisone in the centers of Australia, which recruited about 72 per cent of patients (see supplement of the study). This raises the question whether hydrocortisone treatment should be linked only to disease severity or if other relevant yet undefined factors need to be regarded. Steroid action depends on the immune status of the individual patient prior to treatment. In this context, polymorphism of glucocorticoid receptors is a well-known phenomenon and glucocorticoid-responsive subtypes can be found also in less critically ill patients (19).

In conclusion, the studies by Venkatesh et al. and by Annane et al. provide a consolidation of current knowledge on hydrocortisone therapy in septic shock. Although a reduction in the primary endpoint of 90-day mortality was proven only in the study by Annane et al., improved morbidity could be clearly demonstrated in both studies on a large scale. Besides earlier shock reversal, it has been shown for the first time that the length of mechanical ventilation and the length of stay in the ICU can be reduced by hydrocortisone. Still, for clinical practice, some questions remain to be clarified: first, should hydrocortisone only be applied combined with oral fludrocortisone? Second, should we target the most severely affected subgroup of septic shock patients with an expected mortality rates of 45% and more, or can beneficial effects be expected also in less severely ill patients with septic shock? And finally, is it sufficient to use only clinical criteria to initiate hydrocortisone therapy in septic shock or do we need more information on the individual immune status of the patient prior to treatment?