Over the last few years there has been a significant increase in the number of small pulmonary nodules detected by low-dose computed tomography (CT) in the context of lung cancer screening programs (1,2). These lesions should be considered potentially malignant until proven otherwise, usually through biopsy or direct surgical removal (3). However, their excision by video-assisted thoracoscopic surgery (VATS) is frequently challenging (4). A key requirement for successful intraoperative identification of small lung nodules is their precise lesion localization during the preoperative phase (5,6). Accordingly, removal of small lung nodules generally involves a two-step procedure, where the lesion is first localized in a CT suite, followed by its excision in an operating room. Removal of small pulmonary nodules, however, is currently witnessing a serious paradigm shift. Specifically, the advent of hybrid operating rooms (HORs)—in which sophisticated imaging devices are combined with surgery procedures in a single room—has allowed the localization and removal of small lung nodules to be performed in a single session [i.e., image-guided video-assisted thoracoscopic surgery (iVATS)] (7-9). Because iVATS has the potential to become more widespread among thoracic surgeons in the next future, it is increasingly important to carefully evaluate its procedural aspects and surgical outcomes.

We therefore designed the current study to detail, in a retrospective review, our institution’s experience using iVATS for simultaneous localization and removal of small lung nodules. A special attention was specifically paid to efficacy, safety, and procedural details.

This study was a retrospective analysis of prospectively collected data. Between October 2016 and January 2018, a total of 95 patients with 100 small lung nodules (mean size = 7.94 mm, depth from visceral pleura =10 mm) underwent iVATS at our institution. All clinical and procedural data were collected and managed in an electronic format. The study was conducted in accordance with the ethical principles of the Declaration of Helsinki, and Institutional Review Board approval was obtained (CGMH-IRB 201600671A3). All patients provided written informed consent.

All patients with ground-glass nodules (GGNs) and subpleural cavitary lesions underwent lesion localization. Solid nodules were localized when they were (I) subpleural and <10 mm in size or (II) positioned deeply in the lung parenchyma with a distance to the visceral pleural surface >10 mm.

All iVATS procedures were performed as previously described in a HOR in which a cone-beam CT apparatus (ARTIS zeego; Siemens Healthcare GmbH, Erlangen, Germany) and a Magnus surgical table (Maquet Medical Systems, Wayne, NJ, USA) were present (Figure 1) (8). After induction of general anesthesia, patients were placed in either lateral decubitus or semiprone or semisupine position according to tumor location and its distance to the surgical table pad (10). Then sterile wrap protections were placed around both the cone-beam CT C-arm and the patient’s chest. An initial scan for surgical planning was acquired during breath hold at end inspiration with a standard 6 s DynaCT Body protocol. The access path was laid out in the isotropic data set under the syngo Needle Guidance of a syngo X-Workplace (Siemens Healthcare GmbH). The needle entry and target points were marked to outline the needle path, which was subsequently projected on the patient’s skin using a laser beam. Under three-dimensional, laser-supported, fluoroscopic guidance, an 18-gauge marker needle was introduced into the thorax during breath hold at end inspiration. A laser-targeting cross was projected onto the patient’s surface to visualize the needle entry site and angulation (Figure 2). The planned, virtual needle path was then pointed onto the live fluoroscopic image to adjust both needle orientation and positioning. The needle was introduced using a fluoroscopic “bull eye” approach until the tip was inside the projected target. The appropriate needle location was confirmed by acquiring a post-procedural cone-beam CT image. The lesion was then localized through a localization wire (DuaLok®; Bard Peripheral Vascular, Inc., Tempe, AZ, USA). Superficial lesions (distance to pleural surface <20 mm) were delineated through the injection of either PBV dye (0.3−0.5 mL, patent blue V 2.5%; Guerbet, Aulnay-sous-Bois, France) or diluted indocyanine green (0.3−0.5 mL, 0.125 mg/mL). Cone-beam CT guidance was used throughout the entire procedure. VATS wedge resection was guided by either a hook wire or a dye. The resected pulmonary specimen was submitted to frozen section examination. Patients with a confirmed diagnosis of primary lung cancer were generally treated with lobectomy, with sublobar resections being used only for peripheral lung cancer of limited size (<2 cm) and adequate resection margins (either >2 cm or >tumor size). 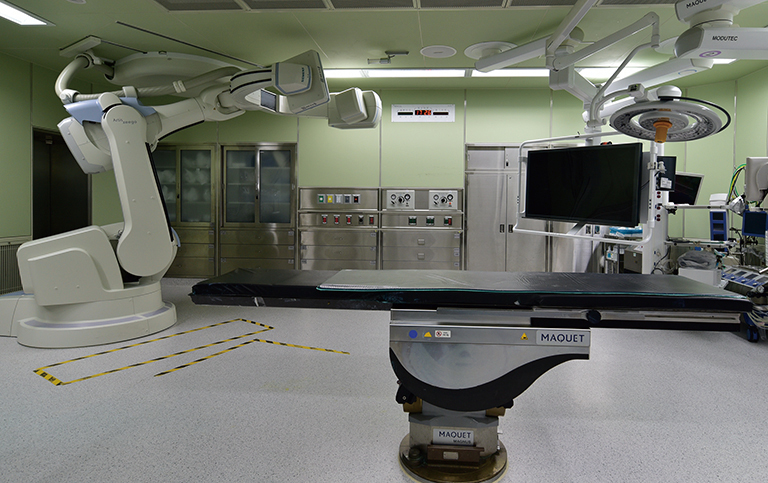 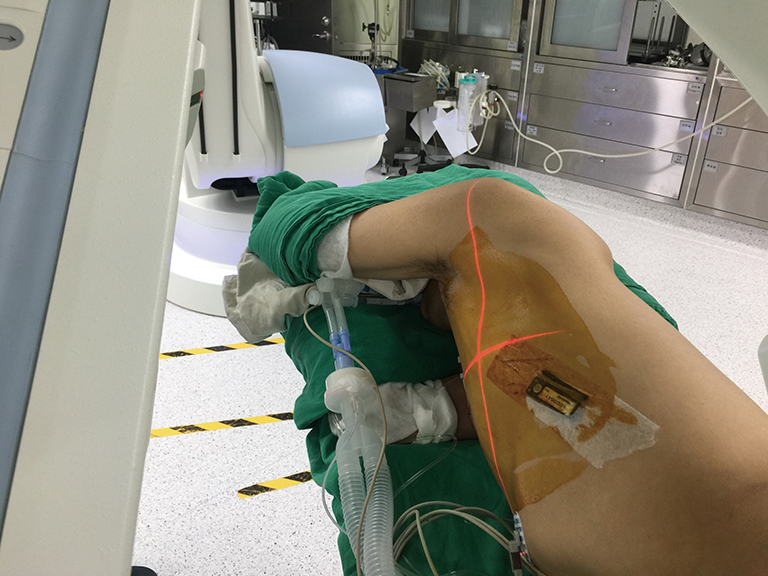 Figure 2 A laser-targeting cross was projected onto the patient’s surface to visualize the needle entry point and angulation.

Table 1 summarizes the general characteristics of the study cohort (n=95). Five patients had two nodules each, resulting in a total of 100 small pulmonary lesions (mean size =7.94±4.53 mm; depth from visceral pleura =10±9.13 mm; depth-to-size ratio =1.52±1.62). Of them, 48 (48%) were solid pulmonary nodules and 52 (52%) pure GGNs. The localization process is described in Table 2. A total of 92 (92%) lesions were successfully localized with the patient lying in the lateral decubitus position. In the remaining eight (8%), the patient required supine or prone positioning before being placed to the decubitus position for surgery. Intraoperative cone-beam CT imaging was successful in identifying all nodules. Hook wire and dye localization was performed in 38 (38%) and 62 (62%) lesions, respectively. 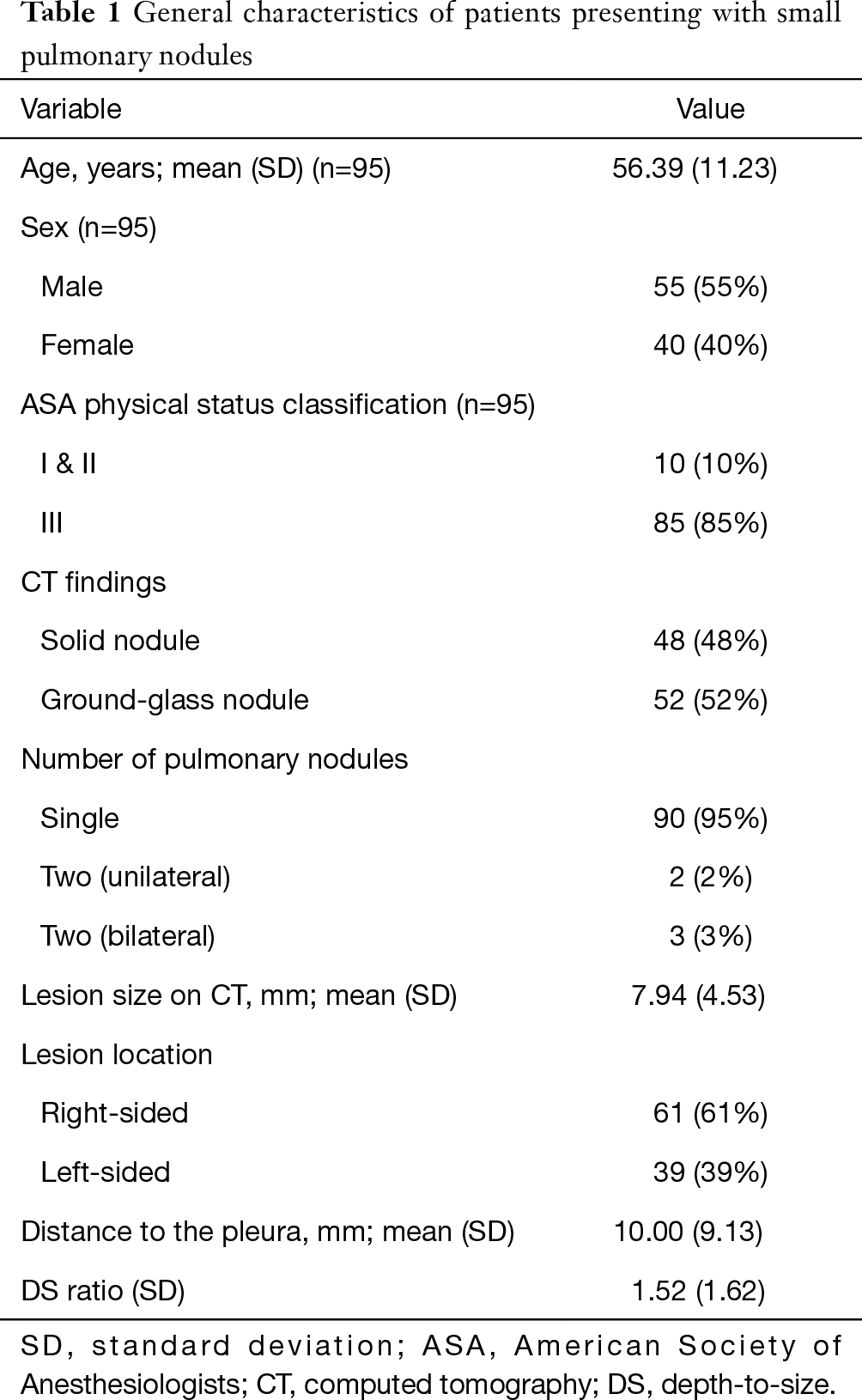 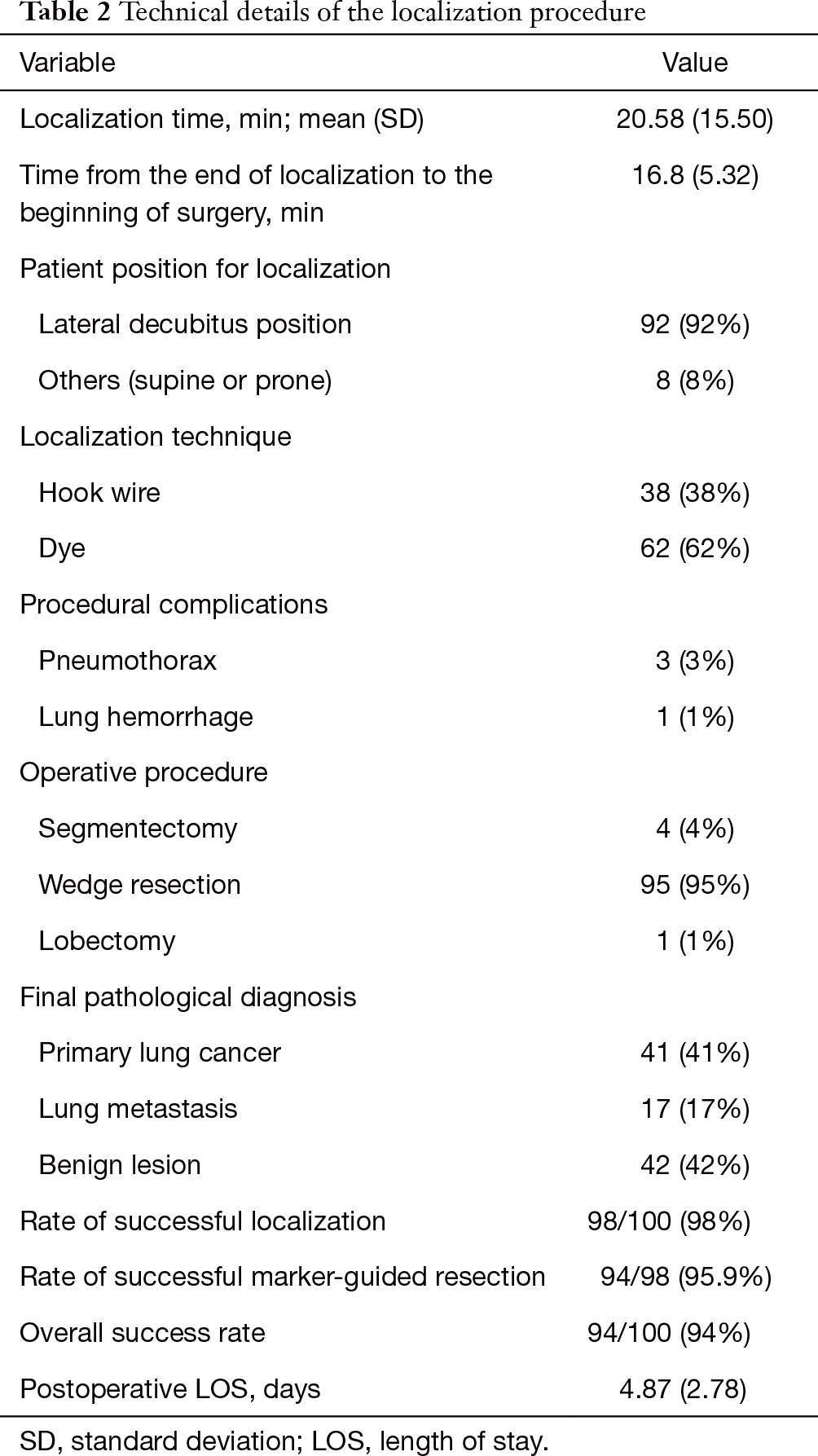 The mean localization time was 21.19±16.08 min while the time interval between completion of localization and skin incision was 16.8±5.32 min. A significant inverse association was found between localization time and the surgeon’s experience (Pearson’s r=−0.632; P<0.001; Figure 3). The localization time between wire and dye was similar (P>0.05). All tumors were visible on cone bean CT image. However, massive pneumothorax caused by needle puncture was responsible of two failures during lesion localization, resulting in a 98% rate of successful localization. These first cases underwent a small utility thoracotomy to allow digital palpation. Among the 98 patients in whom the localization procedure was successful, we failed to complete marker-guided tumor resection in four patients, either because of wire dislodgement (n=2) or dye spillage (n=2). Therefore, the rate of successful marker-guided resection was 95.9%. Nonetheless, the scheduled thoracoscopic resection was successfully performed under guidance of the puncture hole positioned on the lung surface. An initial wedge resection allowed the removal of all lesions. The following pathological diagnoses were obtained: primary lung cancer (n=41), lung metastases (n=17), and benign lung lesions (n=42). The diagnostic distribution in the latter group was as follows: granulomatous inflammation (n=18), fibrosis/organizing pneumonia (n=14), hamartoma (n=2), and presence of an intrapulmonary lymph node (n=6). We were able to obtain clear margins in all cases. Owing to a short parenchymal resection margin distance, we performed an additional anatomical segmentectomy in four cases and a lobectomy in one patient. There were no perioperative deaths. All patients were successfully discharged home after a mean hospital stay of 4.87 days. 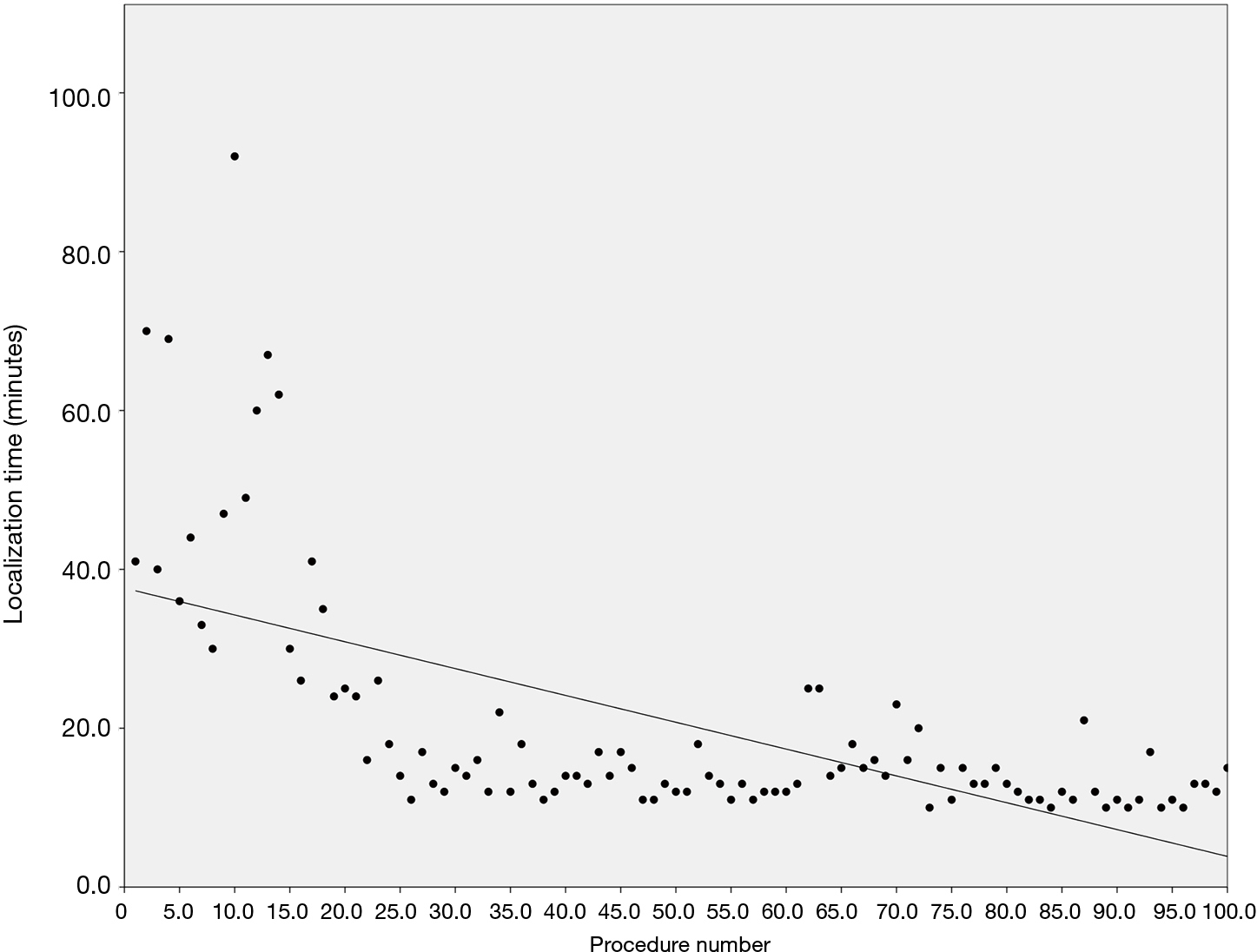 Figure 3 Localization time (raw values) plotted as a function of the number of procedures. The regression line was drawn with the least square method.

Here, we summarize our single-center experience of 100 iVATS procedures for simultaneous localization and removal of small lung nodules. This study is noteworthy in that (I) it is the largest case series published so far on this specific topic and (II) the localization time is the shortest reported to date (Table 3) (7,9,11,12). The implementation of iVATS for removal of small pulmonary nodules is expected to increase over the next few years for at least two reasons. First, several lung cancer screening programs have been initiated, resulting in a higher number of lung nodules being detected on low-dose CT imaging (13,14). Second, the HOR environment has emerged as a new trend and will play a vital role for the advancement of minimally invasive thoracic surgery. Because careful planning and professional expertise are key factors for treating small lung nodules with iVATS, we believe that our data can provide useful information to implement an approach combining lesion localization and removal in a single session.

The key issue for debate is certainly positioning. Positioning of subjects with small lung nodules for iVATS is challenging and requires the reciprocal placement of patient and the C-arm to be optimized to achieve an adequate field of view (FOV). Notably, a centered target is paramount to obtain an ideal resolution when cone-bean CT is used for imaging. Peripheral lung nodules cannot be easily included in cone-bean CT FOV when the patient is lying in the lateral decubitus. During our first iVATS procedures, we sought to place all patients in the lateral decubitus position independent of nodule localization. Although this was aimed to remove all nodules in a timely fashion, we sporadically experienced procedural delays in the event of collision between the rotating C-arm and the surgical table (8). To overcome these drawbacks, various effective changes in patient positioning were accomplished. First, we developed a protocol for rapid identification of patients at high risk of having a collision between the C-arm and the surgical table during nodule localization. To achieve an optimal FOV and avoid repositioning, all of these high-risk cases were placed in either the semi-prone or semi-supine position (8). Owing to the specific cone-beam CT design, the FOV varied according to the entry position of the C-arm. When the lateral decubitus position was used, a patient anterior C-arm entry maximized the FOV over the posterior chest wall. In contrast, the FOV over the anterior chest wall was maximized by a patient posterior C-arm entry. Consequently, lesions located over the posterior chest are more likely to be included into the FOV when a patient anterior entry position is used, and vice versa (10) With the help of the aforementioned maneuvers, we were able to perform iVATS in a highly efficient and accurate manner.

Some limitations of this study should be noted. First, our results might not be generalizable because of the retrospective, single-center study design. Second, all iVATS procedures were performed by a single team of thoracic surgeons not previously experienced with cone-bean CT-guided procedures. The question as to whether our results would be similar to those obtained by surgeons more accustomed to hybrid procedures remains open. These caveats notwithstanding, our current data will hopefully offer a framework to guide implementation of iVATS—ultimately favoring a smooth transition in the surgical management of small lung nodules.

In the current context of an increase in early diagnosis of lung cancer by screening programs, iVATS performed in a HOR offers a safe and efficient option for simultaneous localization and removal of small pulmonary nodules.

Funding: This study was financially supported by a grant (CMRPG3F1812) from the Chang Gung Memorial Hospital, Taoyuan.

Ethical Statement: The study was conducted in accordance with the ethical principles of the Declaration of Helsinki, and Institutional Review Board approval was obtained (CGMH-IRB 201600671A3). All patients provided written informed consent.